The 5 Most Beautiful Forest Peaks in China

Guilin, located in the west of Li River which is in northeast of Guangxi province. Guilin means “forest of osmanthus trees”. Typical karst topography constituted the unique guilin landscape with green hills, clear water, special caves, beautiful stone, and enjoy the reputation of “landscape of Guilin". Guilin landscape is including mountain, water, karst cave, historical relics, stone carvings, etc. The mountains of yangshuo are continuous for ten miles; like a bamboo shoot of each is dependent. Reaching the upper section of Moon Hill in Yangshuo requires you to make a steep climb up a well-made path through groves of dense bamboo. Once past the luxuriant vegetation, the path enters the great natural opening that distinguishes this mountain from its neighbors. Moon Hill is not only an incredibly beautiful arch, it is certainly also one of the most interesting crags in the area. The skyline is lined with peaks of almost equal height – resembling a jumble of giant rock traffic-cones pointing skywards. A patchwork of fields of diverse crops, in different stages of growth, enhances the landscape. 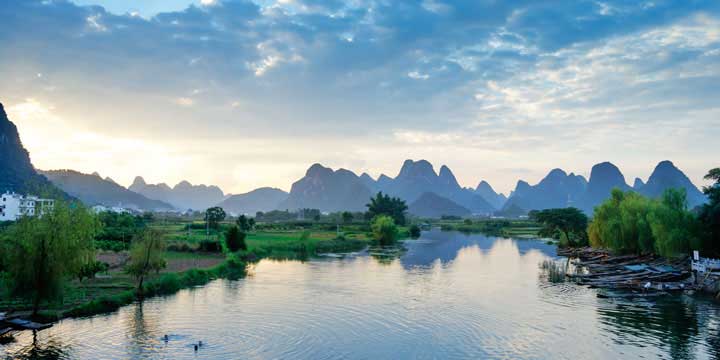 Forest of Ten Thousands Peaks, 4.5 miles away from Xingyi City which is divided into east peak forest and west peak forest with different scenery, and it is a classic Karst landform. Wanfenglin is the important component of national scenic area Maling River Canyon. East peak forest is characterized by Karst peak cluster landform, and west peak forest is highland Karst landform. Due to grand and beautiful scenery and perfect style, Peak Forest has a sense of wonderland. It is as if you steeped into a scroll painting of green-grey peaks and golden fields and you may feel like entering a paradise.
Wanfenglin, with an altitude of 2000 meters, spreading into a fan shaped, extending to Anlong and Fengzhen. Northwest is higher and southeast is lower, and it is tilting to the Yellow mud river. The whole Peak Forest is 200 miles long, 30 to 50 miles wide, and with an area of 2000 square kilometers in the Xingyi city. According to the form of Peak Forest, it is classified into Array Peak Forest, Sword Peak Forest, Dragon Peak Forest, Arhat Peak and Folding Peak. 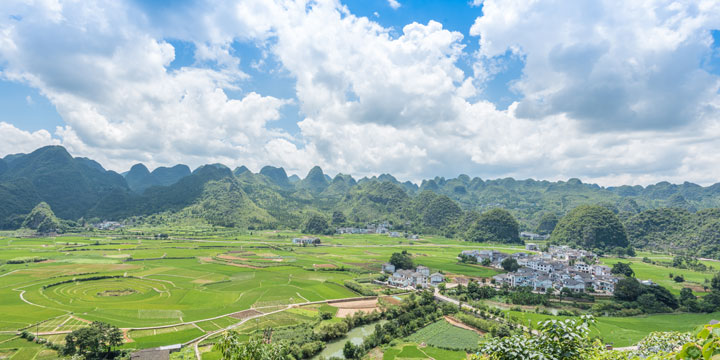 Wulingyuan Scenic Area is located in northwest of Hunan Province in central China. It is 36 kilometers away from Zhangjiajie downtown and famous for lofty peaks, fantastic rocks, valleys, gurgling springs and caves, which are praised as “Museum of Natural History”. It consists of the Yangjiajie, Suoxi Valley in Cili County and Tianzi Mountain in Sangzhi County, with a total area of about 369 square kilometers, and the area of scenic region is 264 square kilometer
Hundreds of millions of years ago, Wulingyuan is a vast ocean. With constantly change of nature, the geomorphology of Wulingyuan has changed into a wonderful and fantastic scenic spot. It has got a lot of honorable reputation, such as the world Natural Heritage Site, world geological parks, national 5A-class tourist area and National Civilized Scenic Area. 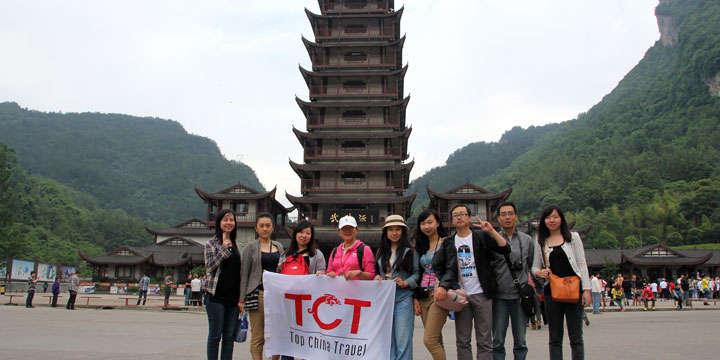 MountSanqingshan is located at the junction of Yushan County, Shangrao City and Dexing City in the northeast of Jiangxi Province. The major peak of Yujing peak is 1819.9 meters high. Mount Sanqingshang got its name as it is composed of three summits resting in a row, that is, Yujing, Yushui and Yuhua, which represents the Taoist trinity. Sanqing signifies the “Three Pure Ones” in Chinese. Mount Sanqingshan is going through changes in geological movement for 1.4 billion year. The physiognomy of the mountain has formed a unique landscape of granite peaks after 1.4 billion years of geological movement, vicissitudes.
It is 50 kilometers away from Yushan County. The total area of Mount Sanqingshan National Park is 229 square kilometers. The highest peak is Yujing summit with a height of 1819.9 meters, which is fifth peak in Jiangxi province and also the source of Xin River. Mount Sanqingshan National Park was recognized as a UNESCO World Heritage in 2008 for it is a shelter for animals and plants. 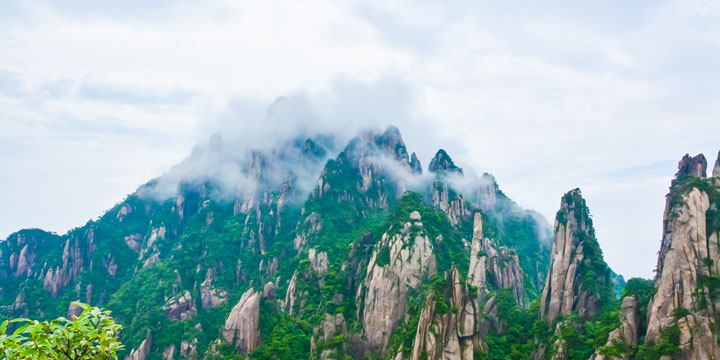 Luoping Jinji Forest Peaks are located at the east of Yunnan, in the conjunction of Yunnan, Guangxi and Guizhou. It had a profound history and beautiful scenery of typical Karst landscape. From Luoping County, along the State Road 324 driving eastward for 12 kilometers, there are lots of conical hills, distributing at Bazili, which is Jinji Peaks. It covers an area of about 100 square km. In winter and spring, hundreds of thousands of acres of canola flowers bloom at Baizli together into a piece of golden sea. In the wind of the spring, the golden canola flower waves swing in the sunlight, very beautiful and amazing. Dozens of peaks float in flog, and then, along with the sunrise, flog become thinner and thinner, more and more peaks appear with sunlight on them. Later, the flog drops away, the “golden sea” appears.

The 5 most beautiful forest peaks listed above have their own characteristics. You can pick out the loveliest one to travel. Top China Travel can tailor made your tour based on your needs.