The Largest Islands in China

TopChinaTravel would like to introduce the following The Largest Islands in China for you. 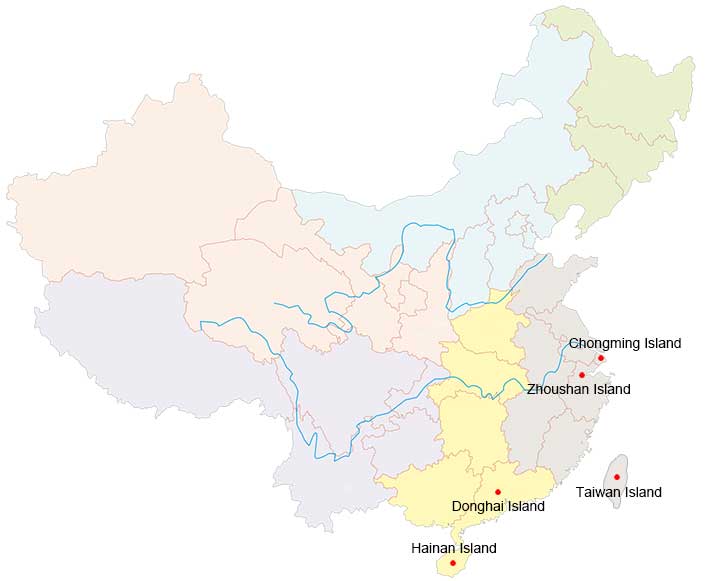 Taiwan is an island or island group in the western Pacific Ocean located off the southeast coast of mainland China. Covers an area of 35,774.6 km², it is the largest island in China, and the important transit hub that connected China and countries of Pacific area. Separated from the Asian continent by the 160 km (99 mi) wide Taiwan Strait, Taiwan is 394 km (245 mi) long and 144 kilometres (89 mi) wide. This island enjoys abundant natural and cultural resources and is home to the Gaoshan nationality.

Hainan Island is the main island of Hainan Province, and is the second largest island of China. Located at the southernmost point of China, it separated from mainland China by the shallow and narrow Qiong-zhou Strait, facing Taiwan Island across the South China Sea.

Hainan is the smallest province of China, it comprises some two hundred islands scattered among three archipelagos off the southern coast, 32,900 square kilometers of its land mass is Hainan Island, from which the province takes its name.

Lied against the northern shore of the Yangtze River, Chongming Island is the third largest island of China. Covers an area of 1,041.21 square kilometers, it is an alluvial island formed by silt carried along the river, the largest sandy island on earth. With an altitude of 3.5m-4.5m above sea level, Chongming Island is flat with fertilized soil and abundant wood and marine resources. People can take ferries or drive through the Yangtze Tunnel Bridge of Shanghai to reach the island. Chonghai Bridge is undergoing which will connect this island and Jiangsu Province.

Located to the southeast of Hangzhou Bay, Zhejiang Province, Zhoushan Island is the principal island of the namesake archipelago Zhoushan Islands, covered an area of 468.7 square kilometers. At its closest point, it is 9.1 kilometers from the Chinese mainland. It is a mountainous island with Huangyang Jian as the tallest point at a height of 503.6 meters. The island is connected to Zhejiang Province via Zhoushan Cross-sea Bridge which was formally opened in Dec, 2009.

Donghai Island Has a coastline of 159.48 kilometres, with a total area of 286 square kilometers, Donghai Island is the biggest island of Guangdong, and the 5th largest island in China, which located in the southeast part of Leizhou Penisular, administered by Zhanjiang. Leizhou Culture is the principal culture there as historically it was within former Leizhou County jurisdiction. Rich in cultural and marine resources, it is a popular tourist destination of Guangdong area. Donghai Cross-sea Bridge, which connected the island to Zhanjiang mainland, came into operation in early 2011.