Top 5 Most Beautiful Deserts in China

Desert is an area with very sparse vegetation and almost no precipitation. The ground of the area is covered with endless dunes of sands. The cruel environment here also endows this area a unique landscape—desert landscape. Here, we list top 5 most beautiful deserts in China for your reference, which are also must-see attractions for desert tour fans. 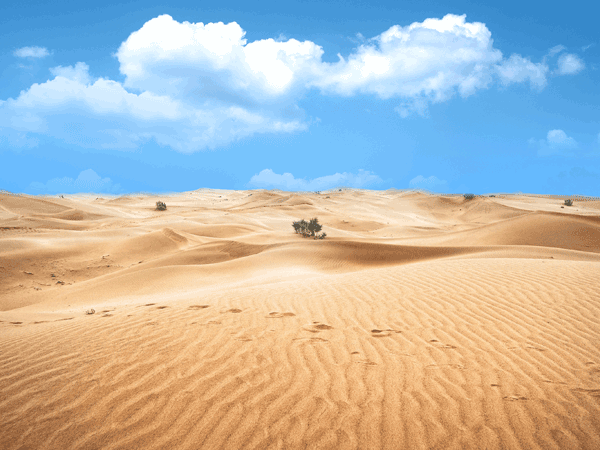 The Taklimakan (Chinese name: 塔克拉玛干沙漠) is the largest, driest and highest desert in China, filling the Tarim basin between the Tien Shan Mountains to the north and Kunlun Mountains to the south in Xinjiang Uygur Autonomous Region. It is also the world's second-largest flow desert that just smaller than Sahara desert in Africa.
The desert extends from west to east for 1000km and 400km from south to north, covering an area of 337,600 square km. It is about 1,000 m above the sea level. Among all the deserts in the world. Taklimakan is the most mysterious and attractive one. The middle of the desert is typical continental climate with violent sandy wind, large temperature difference and rare precipitation. The heights of the sand dunes are around 100-200m, even 300m. In sunny day, tourist often see vogue mirage in distant places. Around the desert there are dense Euphrates and tamarisks, forming “Green Island” in the desert. 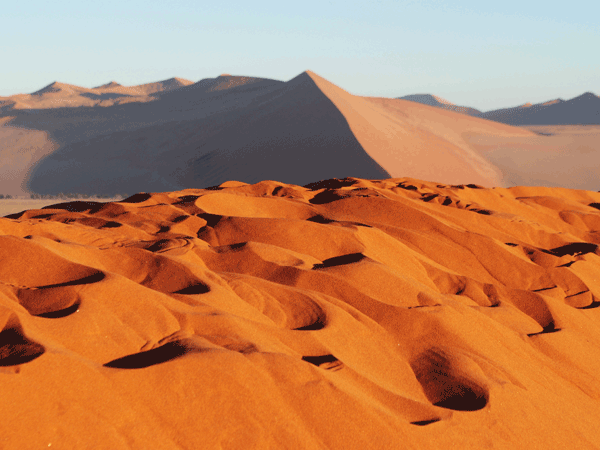 The Gurbantunggut Desert (Chinese name: 古尔班通古特沙漠 ), covering a large area of the center of the Junggar Basin, is the second largest desert in China and also the largest fixed and semi-fixed desert in China, covering and area of 48,800 square meters. The climate here is milder than other deserts. The representative landscape is sand ridge covering 50% of the whole desert area. Scenery here is different in different season. In spring you can see beautiful blooming flowers; in summer, green shrubs; and winter, long cold season with stable snow cover and frequently rime phenomena. 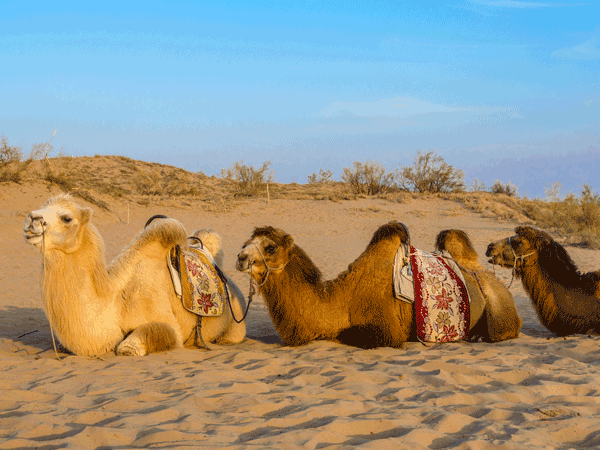 Singing Sand Dune (Mingsha Hill) starts from Mogao Grottoes in the east. It is 40km from east to west, and 20 from south to north. Mingsha (whistling sands) Hill and Crescent Spring scenic spots are 7 kilometers away from downtown Dunhuang and cover a total area of around 200 square kilometers. The dune is with an elegant shape. When people slide down along the slopes, a sound will be heard; hence the name.Singing Sand Dune (Mingsha Hill) is piled up with sand in five colors of red, yellow, green, black and white. The so-called singing sand does not sing by itself, but creates singing sound when people tread or slide on the surface of the sand, which is a kind of miracle of the nature. Some describe this phenomenon as "an astonishing sound of the nature". When sliding on the steep slopes of sand dunes from the top, the drifting sands look like beautiful brocades hung up on the sand dunes or dancing golden dragons, accompanied with beautiful singing sound. The singing sounds like the sound from traditional Chinese music instruments. Hence, the mountain gets its name because of the singing sound of the sand.
Crescent Spring is at the northern foot of the Mingsha Hill and is 118 meters from east to west and 25 meters from south to north. The water is fove meters deep. The crescent-like lake is surrounded by the sand but never buried by it. The water in the lake is very clear all year around. The Singing Sand Dune (Mingsha Hill) and Crescent Spring are twin sisters of natural beauty in the wild Gobi Desert. The sand mountain sings because it is divine while the spring is beautiful because it is miracle. Tourists get thrilled and distracted no matter when they have a bird's-eye-view of the beautiful sand dunes from the top of the mountain or wander beside the clear spring. It's no surprise to have the saying that Singing Sand Dune (Mingsha Hill) helps people free from all worries and Crescent Spring purifies people's minds. 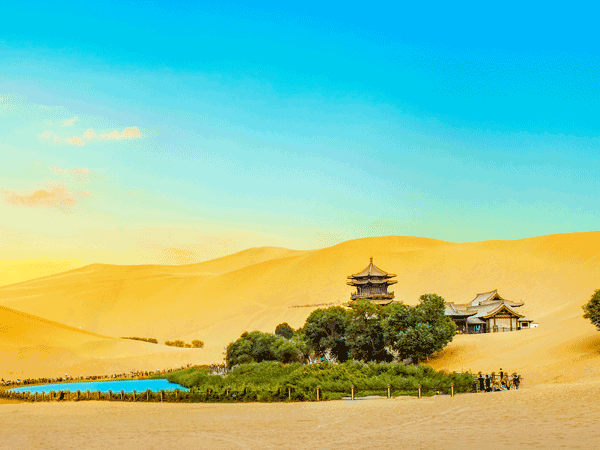 Shapotou（Chinese name: 沙坡头沙漠）, where the Baotou-Lanzhou Railway passes through, is situated at the southeast edge of Tengger Desert in Zhongwei City of Ningxia Province, belonging to steppe desert zone. The Baolan Railway passes deserts for six times. Among these deserts area, Shapotou is the most windy and dusty desert area. In 1950, China began to carry out protecting project against the violent sandy wind. Since then, the desert section where the Baolan Railway passes in Shapotou becomes safe and sound.
There is a unique tourist area established in Shapotou. 150 kilometers from Yinchuan City, you will find a man-made oasis in the middle of the vast sand area. The oasis suddenly unfolds itself in front of you with blue sky, white cloud, and surrounded with yellow sands. All of this composes a unique landscape painting before your eyes. 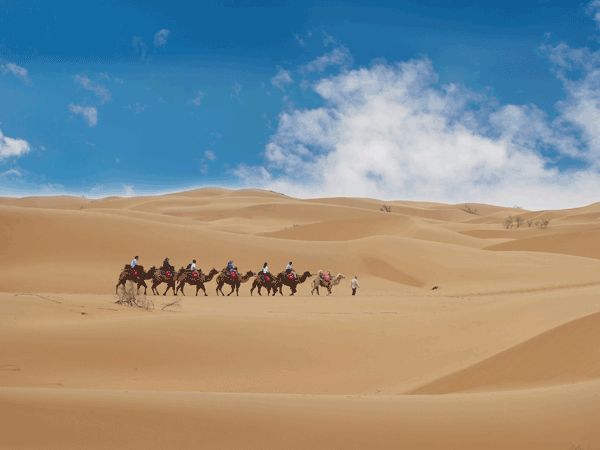