The Longest Canal in China

The Grand Canal in China or Beijing-Hangzhou Grand Canal is a 1,700-kilometer-long water conservancy project in ancient China. It begins at Beijing and ends at Hangzhou. It is the longest canal in China as well as in the world.
First constructed at the end of Spring and Autumn Period in the 5th century B.C., Grand Canal has played an important role in the development of water, conservancy and the economic as well as cultural exchange between the northern part and the southern part. It now becomes a distinguishing cultural site.

Different from most rivers in China which flow from west to east, the Grand Canal is a connector between the north and south from the Yangtze River Valley to the northern part, linking Haihe River, Yellow River, Huaihe River, Yangtze River, and Qiantang River. Due to its running direction, the Grand Canal played is very important role during the ancient time in economic industry.

Although the Grand Canal is not as an economic tie nowadays, it still is a key system for water diversion. The Beijing-Shanghai Railway and sophisticated road systems have marginalized the canal as an important means of transportation, although parts of it, mainly the central and southern sections, are still in use. 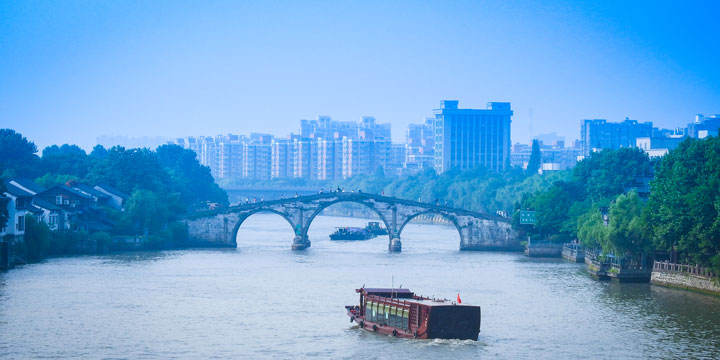 Firstly built in 486BC, the Grand Canal was completed during the Sui Dynasty (581-618), with Luoyang as its west end and Yangzhou as its south center. The northernmost is Zhoujun and the Southernmost is Yuhang. As the capital was changed in Yuan Dynasty, the destination of the Grand Canal also has to change. At that time, the canal route was adjusted and the voyage was shortened. And the Beijing Hangzhou Canal was formed. The current total length of the reserved waterway is 1,700 km, of which 70% is still navigable.

Important Cities along the Grand Canal

The Grand Canal runs through Beijing, Tianjin, Hebei, Shandong, Anhui, Henan, Jiangsu and Zhejiang, eight municipalities and provinces all together. It confluents with Haihe River, the Yellow River, the Huaihe River, the Yangtze River  and the Qiantang River, which are all west-east-flowing rivers.
Beijing -Northern end of the Grand Canal, the capital of China
Tianjin -One of the four municipalities directly under the Central Government in China
Yangzhou-A military fort and a cultural center in ancient times, located in Jiangsu Province
Wuxi -One of the 10 Most Dynamic Cities, located in Jiangsu Province
Suzhou -One of the most beautiful cities in China, the capital of silk, famous for its ancient gardens, located in Jiangsu Province
Hangzhou -capital city of Zhejiang Province, “holy and beautiful paradise on earth”, "first prefecture in southeast” 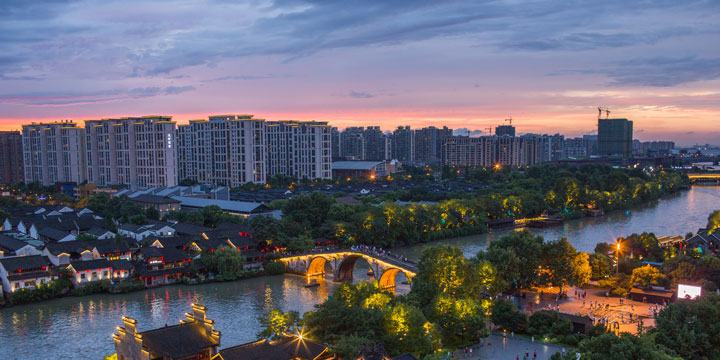 The Modern Course of Grand Canal

The modern Course of Grand Canal is divided into seven portions as follows:
Jiangnan Canal- The southernmost courts of the Grand Canal. This section is from Hangzhou city to Qiantang River and Yangtze River, which passes several cities such as Zhenjiang, Wuxi, Jiaxing Changzhou and Suzhou City. At the bank of Jiangnan, tourists can visit many attractions, for example, Confucius Temple  and Sun Yat-sen Mausoleum in Nanjing City
Zhong Canal- The “Middle Canal” of the Grand Canal. This section starts from Huaian City and ends at Weishan Lake. There are lots of hotels and resorts nearby the Zhong Canal, together with many shops which sell local artifacts and handcrafted items.
Northern Canal and Tonghui River- The northern canal takes a northwestern turn and moves towards the tributary of Hai-Yongding. The canal turns to the Tongzhou city and ends at Grand Canal Cultural Park, which is a destination worth visiting.
Li Canal-This section runs from Yangtze Rive to Huaian City, passing Hongze, Shaobo and Gaoyou Lakes. Travelers can enjoy beautiful sceneries of Xiling Gorge and the Huangling Temple which located nearby the banks of the canal.
Southern Canal- Unlike its name, this section is located in the northern part of the Grand Canal. The canal runs from Cangzhou to Dezhou cities and joins in the Hai River.