The 6380 km splendid Yangtze River is the largest river in China and the third longest in the world surpassed by the Nile in Africa and the Amazon in South America. Unlike the Nile and Amazon flow through several countries along their courses, Yangtze River flows entirely within China’s territory. Its basin drains one-fifth of the land area of the country and it is home to nearly one-third of China’s population. Having 49 tributaries joining in its course, Yangtze River is the most abundant River in China accounting for about 36% of the total river runoff of the country, which is 20 times that of the Yellow River and the sixth-largest river by discharge volume in the world.

Where is the start of Yangtze River?

Traditionally, Tuotuo tributary at the base of a glacier lying on the west of Geladandong Mountain in the Tanggula Mountains is recognized as the source of Yangtze River in China. it is the highest source at 5,342 m (17,526 ft) above sea level of the river.

Where are the upper reaches, middle reaches and lower reaches of Yangtze?

The drainage of the Yangtze is the most populous and prosperous are in China. According to the hydrology and geography, Yangtze is divided into three sections: 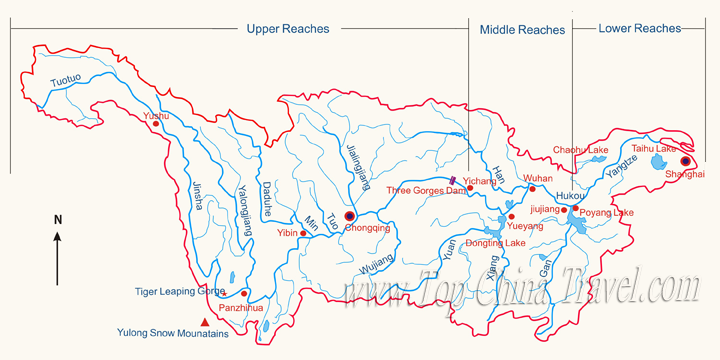 The Upper Reaches is the most attractive section of the Yangtze, famous for its breathtaking mountains, imposing ravines, awing gorges, turbulent rapids and charming landscape. In the beginning of this section, its tributaries originate from Tanggula Mountains and run eastward through Qinghai province. Soon the river turns southward cutting down a deep valley along its way from Sichuan province border to reach Yunnan province. Along this valley, the river's elevation drops from above 5,000 m (16,000 ft) to less than 1,000 m (3,300 ft). Tiger Leaping Gorge in north Yunnan is famed for its very best location to sense the turbulence and angry of the river crashing through the valley. Once its reach Sichuan basin, the river meets several main water sources such as yalongjiang, daduhe, minjiang and increase the water volume to a great level.

Later it cuts its way through Mt. Wushan and creates the world famous Three Gorges. Our Yangtze cruise is served along this section from Yichang to Yibin presenting you the spectacular beauty of the Yangtze River scenery.

The Middle Reaches is from Yichang City to Hukou City at the mouth of Poyang Lake in Jiangxi Province. Once enters into the second section, the current slows down and the river becomes wider. In this region, the river draws strength from a couple of Chinese largest fresh-water lakes which are Dongting Lake and Poyang Lake.

The Lower Reaches .This area is featured by flat delta plain, the crisscrossed canals and waterways as well as the serene waterside villages in south China. In this section, the water is very deep and the river wider. The area is fertile and populous, with the Yangtze River Delta the most economic developed area in China.

Originating from the eastern part of the Tibetan Plateau, Yangtze River winds its way through 11 provinces crossing China before meets the East China Sea.


How was Yangtze River formed?

In the Triassic period 200 million years ago, the Yangtze River Basin was still occupied by the ancient Mediterranean (Tethys Sea). At that time, Tibet, Qinghai, Yunnan were all part of ocean. About 140 million years ago in the Yanshan movement of Jurassic time, Tanggula Mountains, derived mountains of Yangtze river, Qinghai Tibet Plateau slowly raised and the ancient Mediterranean shrunk to the West Then Yangtze River basin generally started to form.

Yangtze River is an important Cradle of Chinese nation

The mighty Yangtze River is regarded as another great civilization cradle of China apart from the yellow river basin. Discoveries of ancient human fossils found in Yangtze River basin had proofed date back to the Paleolithic age about 3-2 million years ago, its basin area was one of the major areas for the survival and evolution of early human beings in China.

Teeth of ancient Wushan people unearthed in Mt. Wushan area in Chongqing It Belongs to the early period of the Old Stone Age which was 2 million years ago. At present this is the earliest human being fossil ever found in Southeast Asia.