Located in East Asia, west coast of the Pacific Ocean, the People's Republic of China (PRC) has a land area of about 9.6 million square kilometers, and is the third-largest country in the world, next to Russia and Canada.
From north to south, China stretches from the center of the Heilongjiang River north of the town of Mohe (latitude 53° 30' N) to the Zengmu Reef at the southernmost tip of the Nansha Islands (latitude 4° N), and from tropic zone to temperate zone. When the north is still covered with snow, farmers in the south are busy with spring plowing. From west to east, the nation extends about 5,200 km from the Pamirs (longitude 73° 40'E) to the confluence of the Heilongjiang and Wusuli rivers (longitude 135° 05' E), with a time difference of over four hours. When the Pamirs are cloaked in night, the morning sun is shining brightly over the east.


China has a border line of 22,800 kilometers long on land, and borders on 15 countries: Korea in the east; the People's Republic of Mongolia in the north; Russia in the northeast; Kazakhstan, Kirghizstan and Tajikistan in the northwest; Afghanistan, Pakistan, India, Nepal, Sikkim and Bhutan in the west and southwest; and Vietnam, Laos and Myanmar in the south.

China has a water area of about 4.73 million square kilometers, and a  mainland coastline of about 18 thousand square kilometers. Chinese mainland is surrounded by a large waters from north to south: the Bohai Sea, the Yellow Sea, the East China Sea and the South China Sea. The Bohai Sea is a continental sea, semi-closed, and surrounded by Liaoning, Hebei, Tianjin, and Shandong. It is abundant with natural resources, marking it a natural fishery and a production base of salt. In winter, its water may freeze due to frigid weather and navigation is affected. the Yellow Sea is semi-closed by Chinese mainland from Yangtze Estuary to Shandong and the Korean Peninsula.  The East China Sea extends from Shanghai to Taiwan island and the South China Sea is from Guangdong to South China Sea islands.


Among those island, some islands are developed into tour spots with unrivalled scenery, like Chongming Islands in Shanghai, Gulangyu Island in ZheJiang, Weizhou Island in Guangxi. There is a newly developed tour in Xisha Islands, taking a cruise from Haikou to Xisha.

China has a complicated  topography, including towering mountains, basins of different sizes, undulating plateaus and hills, and flat and fertile plains. For plateaus, the four largest plateaus are Qinghai-Tibet Plateau, Inner Mongolian Plateau, Loess Plateau, and Yunnan-Guizhou Plateau. It has many mountain ranges, like the Himalaya mountain range in the southwest, Tianshan in the north west, Changbaishan in the north east, and Wuyishan in the south.  In terms of basin, China has several basins, and the four biggest ones are Tarim Basin, Junggar Basin, Qaidam Basin and Sichuan Basin. The first three are located in desert areas, and the last one is in a mountainous area. Among those plains, the four largest plains are the Northeast China Plain , the North China Plain, the Middle-lower Yangtze Plain and the Central Shaanxi Plain.


Generally speaking, China in topography descends from the west to the east, and forms a three-step “staircase” according to altitude. The first step is Qinghai-Tibet Plateau, with an average altitude over 4,500 meters, and it has the Qomolangma  or Everest, praised as “roof of the world”. The second step is lower, with an average altitude between 1,000 -2,000 meters, has large plateaus and basins, and includes the Inner Mongolia, Loess and Yunnan-Guizhou plateaus, and the Tarim, Junggar and Sichuan basins. It covers a large area in the mid-west, from Xinjiang, Gansu to, Sichuan, Yunnan. The third step is much lower, with an altitude below 500 meters,  and has hills, low mountains and plains, and it includes provinces in the east and south of China.


With a various topography, China is abundant with tourism, from mountain-climbing like in the Everest, desert exploration like in the Tarim Basin, and horse riding like in a plateau or a plain. 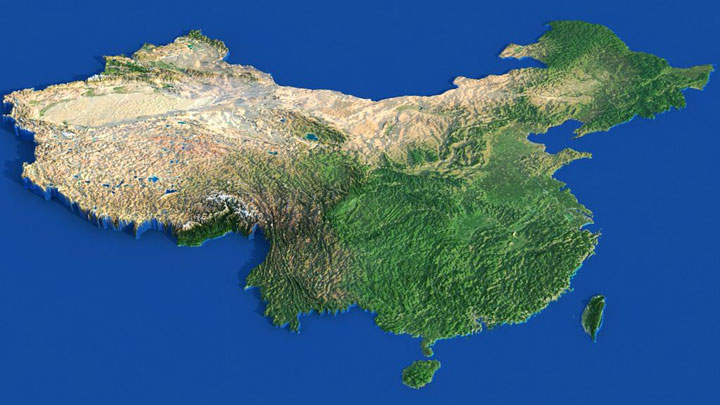 China abounds in rivers in its large territory, with thousands of rivers. Among those rivers, there are over 1,500 rivers with an drainage basin over 1,000 square kilometers. Most rivers have a water origin in the west of China, and flows from the west to the east. Rivers usually have a flood season in spring and summer, own to the climate. Thus they are rich in hydroenergy, due to runoff and water fall caused by topography.  Though China has lots of rivers, it is still influenced by draught. Some places lack of rivers in deserts, and some rivers don’t  have much water as a consequence of continuous bad weather. While in the flood season, some rivers  may cause flood disasters to the surrounding places. 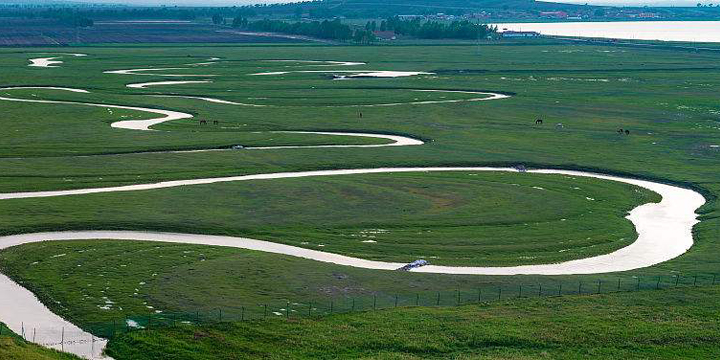 China's rivers can be categorized two kinds according to where they flow forward. One kind is that a river flows directly or indirectly into a sea, and another is that a river doesn’t flow into a sea, but into an inland lake or disappears in inland.  Most rivers in China flow east, and empty into the Pacific Ocean like The Yangtze, Yellow, Heilongjiang, Pearl, Liaohe, Haihe, Huaihe and Lancang rivers. Few rivers  first flow east and then south into the Indian Ocean like The Yarlungzangbo River in Tibet, while the Ertix River flows from the Xinjiang Uygur Autonomous Region to the Arctic Ocean.


The Yangtze River is the largest and longest  river in China, and the third- longest in the world, next only to the Nile in northeast Africa and the Amazon in South America. It is 6,300 kilometers long, and has a drainage basin of 1, 809 million square kilometers, and flows through 11 provinces(including Shanghai). It has a water origin in Qinghai-Tibet Plateau, flowing through three steps of topography and ends in the Pacific Ocean through Shanghai. Due to the fall of topography, the Yangtze River has a richness in hydro-energy, thus the Three Gorge Dams is built in the river and it is the largest hydroelectric power station in the world . 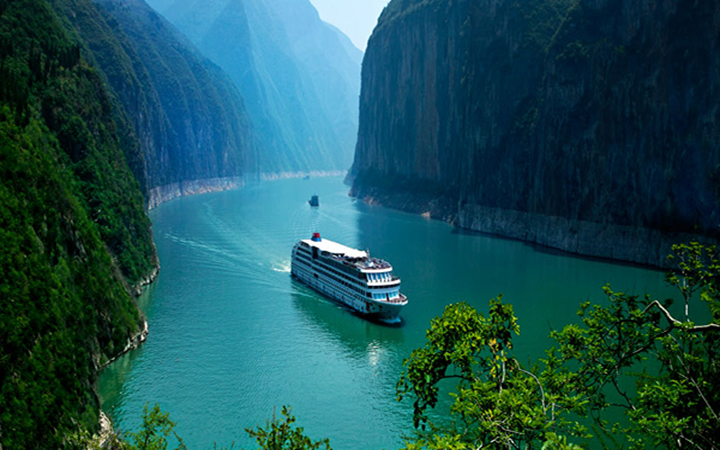 
The three rivers both from west to east, and end in a sea, and they are the main rivers in China from the north to the south, and provide lots of water to production activities and human life.
The Grand Canal, is a man-made river running from Beijing in the north to Hangzhou in the south, with a total length of 1,801 km, and it links five major rivers—the Haihe, Yellow, Huaihe, Yangtze and Qiantang. The Grand Canal from Beijing to Hangzhou is first built in the sixth century, marking it the longest as well as the oldest man-made waterway in the world.


People take advantages of such rivers, and develop various tour spots and tour activities. Cruises in the Yangtze River, Pearl River and the Grand Canal are available for tourists, and tourists may cross over those rivers by a cable car or by a boat.


Mountains are famous for its Buddism, like Mount Wutai in Shanxi, Mount Emei in Sichuan, Mount Jiuhua in Anwei, and Mount Putuo in Zhejiang. Mountains are well-known to people for Taoism, like Mount Jiyun, Mount Wudan, Mount Qingcheng, and Mount Longwu, and all of them are sacred  mountains to Taoism. Mount Taishan, is sacred in politics and religion. In the ancient, Mount Taishan is highly valued by the Emperors who would make great sacrificial rituals here. And it also is considered as the sacred mountain by Buddhism and Taoism.


Mountains are reputed for their splendid sceneries, like Huangshan in Anwei,  Lushan in Jiangxi and Huashan in Shaanxi. Mount Huangshan attracts millions of tourists for its unique pine, stone, cloud and spring, and waterfall. Mount Huashan has a fame in its steepness, and it is also one of mountains related with Taoism. Mount Everest is famous for its height, praised as the ridge of the world, and it attracts tourist for its augustness, and its challenge in mountain-climbing.


For mountain-climbing amateurs, you would like to go to Mount Huashan, and Mount Everest. For a beautiful mountain scenery, you may to mountains like Mount Huangshan. Except Mount Everest, all mountains have steps or stairs to the top, and some have cable cars, which would save you energy. 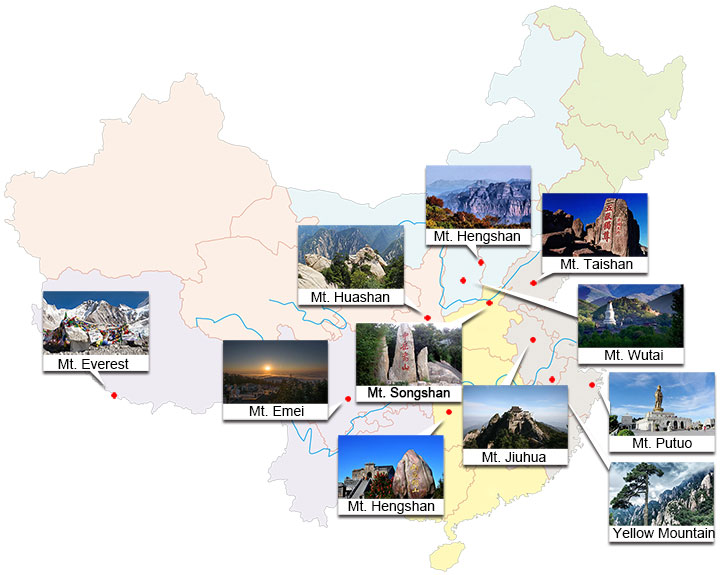