In recent years, you may heard about China’s deteriorating environment, and those news about winter days’ fog and haze  in north China may shock you. But have a deep think, you may feature out why this happens. Every doesn’t have one side, like a coin, and China’s rapid development in economy takes a bill in environment. The development track of China doesn’t successfully get rid of the vicious results which most developed countries had. But Chinese government and Chinese people are fully aware of this disaster caused by themselves, and great and constructive efforts have been put to improve the environment.


For that you have a clear understanding about the environment situation in China, I will introduce  the environment situation, and air pollution in detail. Some news may overstate bad situation of China environment, and arouse panic and worry to tourists.  As a Chinese live in China, I have a bigger saying about the real environment situation, and hope my personal opinions may give you some help.I am sure that many of you who are now reading this article have already learnt how some areas of China are seriously affected by pollution and we face urgent environmental dilemmas, but hopefully, you have also heard about all efforts that Chinese government has been made to deal with these issues and problems. 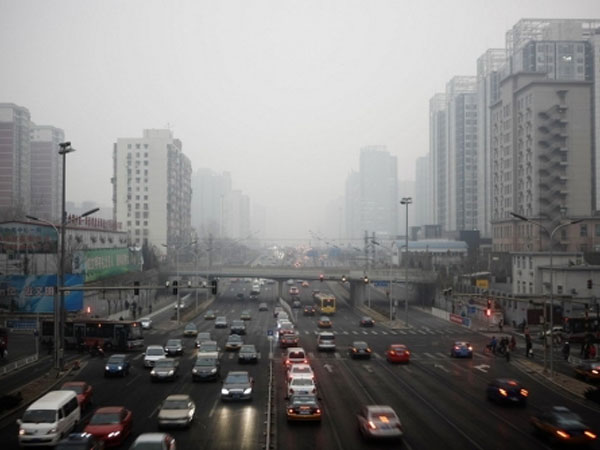 Everyone  intakes air which is one of the most important conditions for living. Air quality directly affects people’s lung,  and it is extremely to physical health. How to check air quality? Have a look of the air around you, and intake some air. Or read reports and analyses about air quality. If you see the sky is grey and the transparency of air is pretty low, and feel air moves slowly, air quality, at a big probability, is not that well.
When the air is polluted, its quality can be reflected from air composition. If air pollution is serious, fog, mist, haze and smog would appear, like the winter days in north China. Smog is mainly composed of sulfur dioxide, nitrogen oxide and inhalable particulate matter. Particulate matter(PM) refers to a mixture of solid particles and liquid droplets found in the air, and it is divided into PM 10 and PM 2.5, according to the sizes of particles. PM 2.5 is fine inhalable particles with  diameters of 2.5 micrometers and smaller, and it is the main index to check air quality. If the PM 2.5 index is between 75-115μg/m³,  the air is light polluted, 115-150μg/m³, mediate polluted, 150-250μg/m³, heavy polluted, and the index above 250μg/m³ refers to “very heavy polluted”. The sources of PM2.5 are automobile exhaust, industrial emission, construction, etc, and some particles are emitted from unpaved roads, smokestacks or fires.


Beijing-Tianjin-Hebei region is heavily affected areas of smog, and it is also the key area of environment improvement. “Smog” is seasonal, usually occurs in winters. If you arrive Beijing in winter days (November to February) you may see a grey and smoggy sky. Why does smog occurs? First in the north, coal is one of the main fuels used in daily life and factories in the past, and its burning brings  lots of inhalable particles. For instance, coal is used as the fuel of heating facility systems in the past. Another reason for the formation of smog is the earth situation in the north. A large area of the earth isn’t covered with plants, and the earth is not solid, which is easily brew into the air by strong winds in winter, such as the Loess Plateau, desserts, and areas with deforestation and land overuse. The third is slow air movement. When there is no wind, or air moves slowly, suspended matters in the air is hard to diffuse. Low temperature pressure in the city center traps the polluted air which hovers above the city instead of floating away. Thus smog is accompanied with poor visibility.

How to Cope With Air Pollution

For a blue sky, and fresh air, government and individuals are serious to deal with air pollution and dedicate themselves to environment improvement. In the government level, plentiful measures have been taken to cope with air pollution. First, energy structure has been adjusted. Clean energy and renewable energy are highly recommended by government in the use of daily life and of factory, and fuel quality has been improved for a sufficient burning and a decrease of emission.  In the huge heating facility systems, government has made an energy reform, replacing coal by natural gas. Natural gas is much better than coal, considering the  emission of combustion. This reform has been made in the whole north, which would dramatically decrease the emission of pollutants. Second, a stop-work order and a production restriction order have been carried in many industries like iron and steel industry, architectural material industry, construction of buildings, roads, and bridges from November to March. Those industries are killers to air quality, and cause great harms to environment.  While some factories having a big emission of pollutants are directly ordered to close. Third, great efforts have been put in transportation tools. In term of cargo transportation, railway transportation has been increased,  motor transportation has been decreased. Old cars and cars with high emission are gradually weeded out, and traffic restriction has been made to cars with a emission standard of level one  and level two.  Clean-energy vehicles are widely promoted, like electric car, and electric mobility scooter. Discounts and other favorable conditions are provided to buyers of clean-energy vehicles.


For improving air quality, individuals are one force and a big puller. In people’s daily life, they buy clean-energy vehicles, clean-energy household appliances, take public bus and ride a bike to work. Bicycle sharing is blooming everywhere, because bicycle is a transportation tool friendly to environment, and it is also promoted by government. The advanced edition of bicycle sharing is car sharing, which has been put into market. People have bonsais in their house, and wear masks in smog days. Those efforts are constructive, and air quality has been improved  little by little according the monthly data about air quality released by government. For better environment, those efforts would be continued, and more measures would be taken.

Except air pollution, China also face other environmental issues, like water pollution, land degradation and waste disposal. China is abundant with fresh water, but per capita water resource is little considering a large population of over one billion, making China one of the thirteen countries lack of fresh water. while water waste and water pollution make  water resource more precious. In the development of economy, many factories drain sewage into rivers and lakes. In agriculture, lakes are made to cultivable land, and chemical fertilizer and pesticide are drained into rivers. Sewage, chemical fertilizer and pesticide are killers to  water quality, and make water undrinkable.  Land degradation is mainly caused by unscientific use of land. Overuse of land, deforestation, false disposal of  waste  metals destroy soil property, and make soil barren. Waste disposal is a headache to China. Every day, a huge amount of waste is made by a large population. In the past, land fill is the main way of waste disposal, but now it is questioned, since it pollutes soil, and there aren’t many lands for it. Burning of waste is  not a doable way, because it will pollute air.

Where  is Polluted and Where is Not 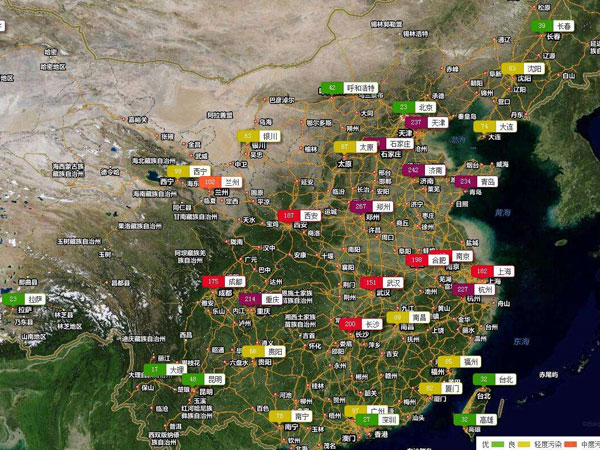 (The more red  in this  picture  indicates  the more  affected. )

Just like every family, each house has its ‘fancy front balcony’ and its backyard a ‘trash garage’. Like any other country in the world, China has shiny cards like Shanghai and Hong Kong, and also has less managed areas like Linfen in Shanxi province where coal mining is the main industry. In China, industrial areas are mainly in the northeast like Heilongjiang, Liaoning, and central provinces such as Hebei, Henan, Zhejiang, Shanxi, Wuhan and Guangzhou. Those cities are highly populated and with lots of factories and vehicles buzzing on the street all day. Whereas, cities like Hangzhou, Guilin, Kunming, Xiamen and Chengdu, has a major industry as tourism and where people attach a great importance to environment protection. Those cities have green mountains and clean rivers, green botanic species and fine weather all year round. Most of travel cities are well arranged with botanical and green parklands and has good air quality, clean streets with plants in two sides. Meanwhile, food and snack vendors are regulated to ensure food safety.

Even within the same city, there are  modern and well designed areas with new skylines in downtown and less managed rural districts and wasted rivers. For instance in Guilin downtown,  the famous Li River is well maintained and connected to major branches and  beautiful artificial lakes, providing tourists a nice view of this beautiful city and this river is a waterway system to travel through the city. Around its outer edges where the city meets its rural area, old districts have been constructed, new buildings are under construction, dusty roads are under repair and widening. As with any modern city, traffic can be a problem although the city’s public transportation system is very efficient – and this is quite true in China. In the countryside, streams are used to water crops, which are well protected. Still there are many “urban farms” as well as designated farming areas with healthy soil and well functioned water systems. 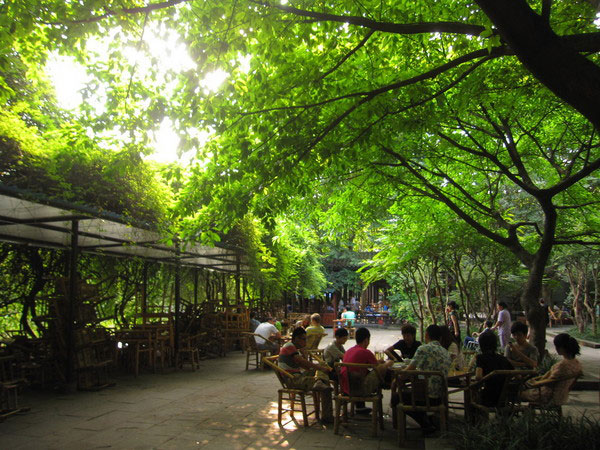 Since  China is the most populous country in the world, most big cities are densely populated and short of open spaces. Thus the scientific use of limited spaces are extremely important, and strategic to environment improvement. In modern urban planning and residential planning, governments make efforts to ensure there are green and relaxing spaces for city dwellers, and that lots of plants are planted along streets and in residential areas, for this could improve air quality and beautify environment. Lots of parks with a high rate of plant coverage are built, and open spaces in local universities are available for local people, who have a walk in beautiful campus, and play badminton in courts.

Planning Your China Visit(Avoiding Adverse Conditions) as a Tourist 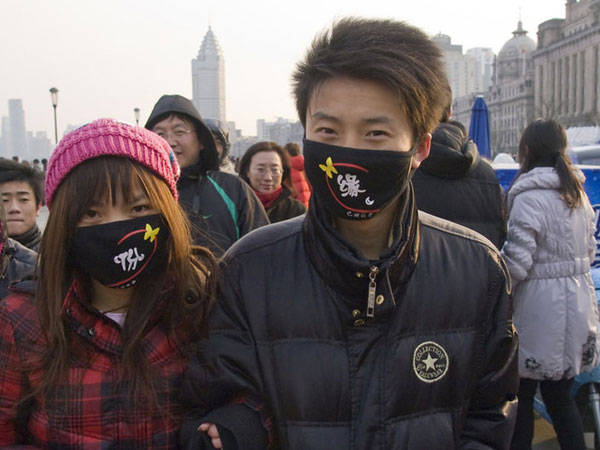 Before you plan to have a trip in China, you should know the best tour season of each region. For a tour to historic and cultural sites, all year round is suitable,  while for a tour to see natural scenery, March to November is suitable of green scenery, and December to February is suitable for winter scenery. For a tour in northern cities in China, winter days with smog weather will affects sceneries and also your emotion. But the southern cities are rarely affected by smog weathers. Therefore, I advice that you’d better avoid smog weather. If your tour in China is scheduled in winter days, please remember to buy some masks.