It is hard to answer whether China is strong or not. Is China's economy still growing? Is China aspired to become the biggest economy in the world? For these questions, answers much depend on what figures and data are referred to and how those figures and data are interpreted. Still the answers are also affected by a big subjective factor, the one who gives answers to those questions, and his or her own personal situation and preference.

Economic Performace Measured by Exchange Rate or in GDP as PPP

In  assessing China's economic performance, there is a huge error of measure methods: comparison of exchange rate is often used by specialist. “GDP” (Gross Domestic Product) is often used to measure a country’s economy, but it creates some distortion and inaccuracy due to inequalities in exchange rate mechanisms and in changing valuations of currencies. GDP is not always in line with exchange rate, thus people  don't use GDP as the only one measure indicator. This often happens in western journalism, in political discourse.  Some economists  regard Japan as the second largest economy though its GDP is less than half the Chinese economy in recent years. And some regard German has a stronger economy rather than China, though China has a bigger GDP than German, for German's GDP in 2003 is only about a quarter of China GDP.

Tim Callen, the Chief of the World Economic Studies Division in the IMF Research Department wrote in 2007: “Who contributes more to global growth, China or the United States? Using currency exchange market rates, it can be said to be the United States – But using PPP (Purchasing Power Parity) it is actually China.”  Mr Callen used economic data issued in September, 2006.  So viewing from some measure indicators, China overtook the U.S. in more than 11 years ago.

Using the exchange rate to measure the level of China economy  greatly understates China's role in the world economy, but using other measure indicators like PPP - Purchasing Power Parity –we find that China has surpassed the U.S. economy. Heavy dependency on exchange rate may cause some misinterpretations and misunderstandings. In nowadays, PPP (Purchasing Power Parity) is also used as a standard measure of international economies by both the IMF (International Monetary Fund) and the World Bank.

In comparing China economy with other economies,  like American economy, we may see it through a simple example: a cup of coffee purchased in Shanghai costs the same amount of money as it is purchased  in New York. 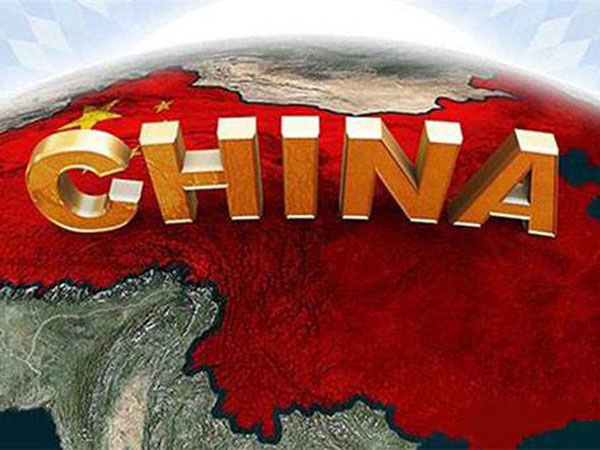 Is China Number One?

Since the past thirty years or so, China has been the world's fastest growing economy. In 1982, China overtook Germany as the world’s third largest economy; in 1992, it overtook Japan as the second biggest economy. In recent years, though China slows down its economy development, it has a GDP of 11,937.56 billion dollars in 2017, and America has a GDP of 19,362.45 billion dollars, which shortens the gap between China economy and U.S. economy.

For around one hundred and forty years the United States had the worlds largest economy and it accounted for 22% of global GDP. China has overtaken the US through comparisons of total economic strength by using over one measure indicators, and one of those indicators is  GDP based on Purchasing Power Parity (PPP).

So far, according to economic data and international influence, China is not regarded as the number one economy, but its economy thrives and will make a great progress in the future. The flowing figure shows that China's economy has been in a great rise,  and it has overtaken Japan's economy and the gap between the two is widening, and it has shorten the economic gap with American economy year by year. Still, if this tendency continues in the future, China will have a stronger economy and have more saying in leading world economy. 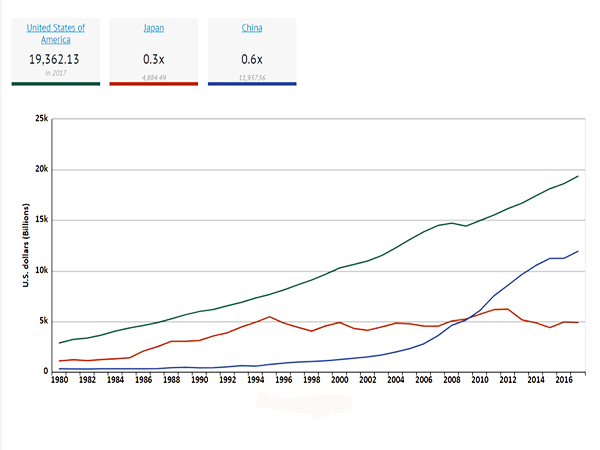 China overtook the US and became the world's largest trading nation in 2013, which is described as "a landmark milestone" by Beijing for the country. China's annual trade in goods exceeded the $4tn (£2.4tn) mark for the first time last year according to official data, after exports from the world's second largest economy rose 7.9% to $2.21tn and imports rose 7.3% to $1.95tn.

U.S trade has a total amount of $3.5tn in the first 11 months of the year, which is lower than China. This change in the trading level has reflected China's rising global dominance, despite a slowdown in economic growth last few years. In over thirty years' development, China has made great achievement in economy. In 2008, China created 13.2 million urban jobs last year, up from 12 million in 2007, when it managed a staggering 14.2% growth in GDP. And China's economy is 25 times bigger now than it was in 1990.

It is widely acknowledged that China's rapid growth over the past few decades has been remarkable, and so it is the same with its’ influence in the world economy and in international affairs. To some countries,  this is a threat, while to others, it is a promise, but for many, it is a mystery. In a remarkable book written by the world renowned economist Angus Maddison, and published by the Organization for Economic Co-operation and Development in 1998, there is a highly detailed analysis of the development of the Chinese economy over the past millennium and the prospects for the next quarter century.

Maddison notes that in past times the Chinese per capita income was higher than that of Europe – this was from the tenth to the early fifteenth century and it was also the world’s biggest economy for several centuries after that! The chairman of the OECD states, from Maddison's study of China's economy, that: “The extraordinary progress in the reform period since 1978 has been a resurrection, not a miracle - and it is likely to resume its normal position as the world's number one economy by 2015.” 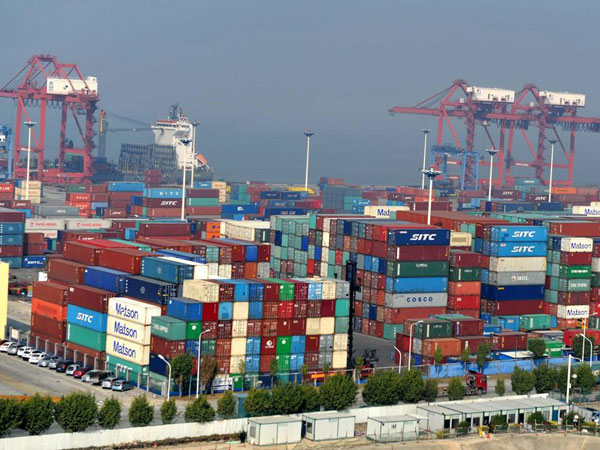 According to data released in 2014 by the International Monetary Fund (IMF), China’s economy overtook the United States economy to become the largest in the world. For the first time in over 100 years, America is not the leading economic power on the planet. China produced $17.6 trillion — compared with $17.4 trillion for the U.S.A. To explain these numbers in more understandable terms, in 2014 China accounted for 16.5% of the global economy when measured in real purchasing-power terms, (PPP) compared with 16.3% for the U.S.

Benefiting from a series of successful policies, China economy GDP has a snowball effect and grows to a huge one, and Chinese per capita income rose by 6.6 per cent a year in the period from 1978 to 2003, faster than any other Asian countries, and  much better than the 1.8 per cent a year in the United States and Western Europe and four times as fast as the world average. Per capita GDP rose from 22 to 63 percent of the world average and China's share of world GDP rose from 5 to 15 per cent.

Fact: “Both the IMF and the World Bank now rate China as the world’s largest economy based on Purchasing Power Parity (PPP), a measure that adjusts countries’ GDPs for differences in prices. In simple terms, this means that because your money stretches further in China than it would in the US, China’s GDP is adjusted upwards.” 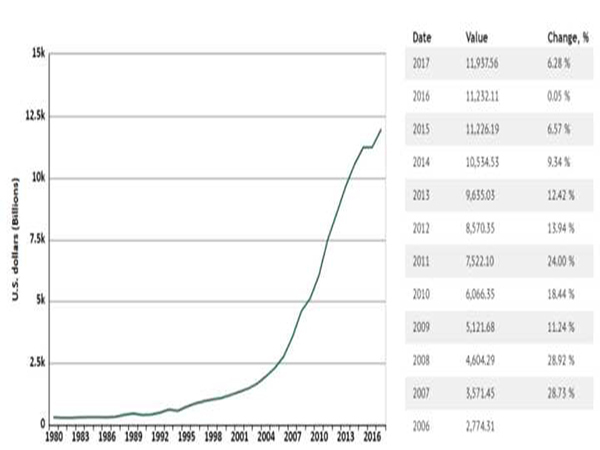 China’s economy  grew by 6.9% which beat the target of 6.5% grow rate, and it is a sign of China’s strong economy, as its grow rates in the past few years are much better other countries.  Since 2008, the world economy has been in a weak, while no serious hurts are caused to China’s economy, and the economy growth is in a stable state. 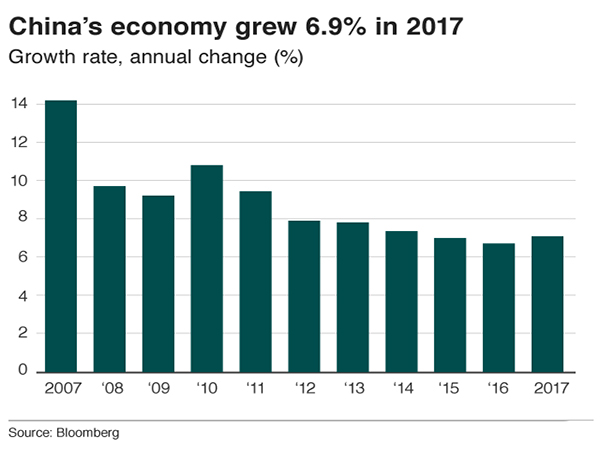 In recent year, hi-tech industries are highly valued in China, along with other industries like new energy and aircraft. Much money and human resource are put in innovation, and to solve problems brought by economic development, like environment.  For instance, in order to increase air quality, China took strict anti-pollution measures, shutting down factories in heavy industry, and encourage energy innovation. Foreign investments in China are encouraged by the government, and it has great investment environment while the world economy is in a slowing growth.

China has been criticized for its coal consumption during the past few decades of phenomenal growth, and it is true to say that China’s energy consumption is significantly higher than the US, this is understandable considering the difference in population size between the two countries. In the first beginning of economy acceleration, energy consumption is inevitable, as the economic history of developed countries tell. Energy supports the running of almost industries, especial the second industry.

However while China's rise has been largely powered by coal, it has been gradually reducing its dependence on fossil fuels. In recent years, China dedicates to shorten energy consumption from several sides. One side is that the state encourages enterprises and people use natural gas to replace coal, and closes lots of coal mines. Another is that technology is used to improve machines and save energy. Still, China pays great efforts in exploiting renewable energy and making renewable energy. According to a 2016 UN report, the country is now the biggest investor in renewable energy globally, spending more than the US and Europe combined.

The rebirth of China and its economy will be regarded as a landmark in the history of the modern world, and it will bring benefits to other countries. China is now once again standing at a historic high position and leads the development of world economy.

Along with its opportunities, there are challenges to be met if China is to continue its economic growth. Those challenges are increasing inequality in income distribution; regional inequality; an ageing population; environmental pollution and degradation, etc,. In overcoming those challenges, the whole country will make more efforts than ever, and, then China and the Chinese economy will provide the foundation to future prosperity and well-being of its people and also the prosperity and well-being of the wider world!

There are challenges to be met if China is to continue on this growth path. They include increasing inequality in income distribution; some regional inequality; an ageing population; stopping and reversing environmental pollution and degradation and, as the Chinese government are encouraging - increasing innovation.In overcoming those challenges, China and the Chinese economy will provide the foundation to future prosperity and well-being of its people and also the prosperity and well-being of the wider world!