The Largest Desert in China

The largest desert in China is Taklimakan Desert, which is also considered to be the second largest shifting desert in the world. It covers a large area in the middle of Tarim Basin of Xinjiang Uygur Autonomous Region in northwest China.
Taklimakan Desert is a constantly shifting desert with extreme weather conditions. It has a nickname “the Sea of Death” which reflects the harsh conditions for wild lives. And the name--Taklimakan’s mean is close to “unreturnable”.

Taklimakan Desert covers an area of 337,000 square kilometers, which is 400km wide and 1000 km long. As the world’s second largest shifting sand desert, it is made up of 85% shifting sand dunes which rank the 18th size in the list of the largest non-polar deserts in the world. In recent years, the unstable desert has expended to its surrounding areas. Its sands are encroaching on local farms and houses, which seriously impact people’s life here.

Taklimakan Desert is a typical cold climate desert. Since it is relatively close to the frigid air masses in Siberia, the temperature here is extremely low in wintertime. Sometimes the temperature here can be below −20 °C (−4 °F). In 2008, during the winter storms episode in China, there were even covered with a thin layer of snow for the first time with the 4-centimeter thick snow and a temperature of −26.1 °C (−15 °F) according to some observatories.
As it is located far away from the sea, it also has the characters of continental climate. The temperature between day and night is very distinctive. Its nights even cold during the summertime. 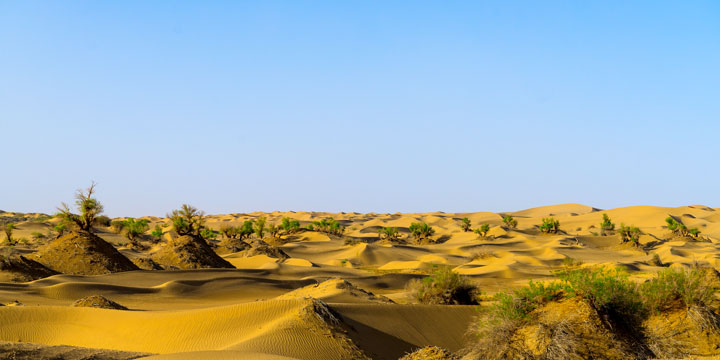 Taklimakan Desert features by it constantly shifting sand dunes. This vast golden sea of sand possesses numerous crescent-shaped sand dunes. Some of the dunes can soar to 800 to 1,650 feet tall when hurricane passing by. Here, the only animal can tackle these sand dunes is camels, whose feet splay outwards so that they could avoid themselves sinking into the sand.

At the south border of Taklimakan Desert, a river called Molcha River forms a large alluvial fan when it passes the Altyn-Tagh Mountains and enters the desert at the western area of Qiemo County.
As there is very little water in the desert, it is really hazardous to cross. The thriving oasis towns were good places for merchant caravans to stop and relief on the long distance Silk Road.
In ancient times, the main oasis towns were Kashgar, Marin, Niya, Yarkand, and Khotan to the south, Kuqa and Turpan in the north, and Loulan and Dunhuang in the east. Now, many oasis towns were ruined in sparsely inhabited areas of Xinjiang Province. 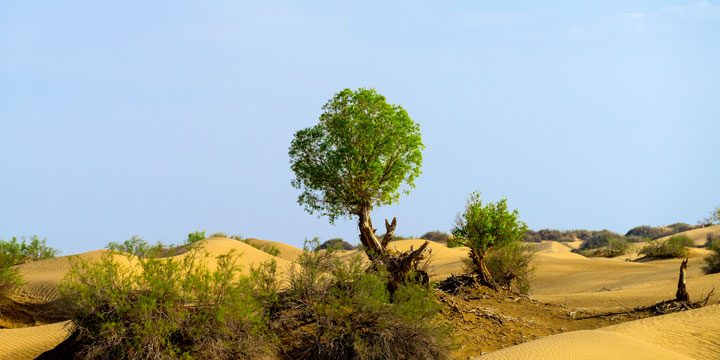 The desert can just support small populations of animals, such as Asian wild asses, wild Bactrian camels, foxes, wolves, wild boars and gazelles. Camels can tolerate the sand dunes and dryness in the desert, as they could seal their slit-like nostrils and keep out sand and dust.

Niter bushes and reeds are the only types of vegetations in the Taklimakan Desert. It is growing in
Depression between dunes. Along the edges of the desert areas plants are much richer.

It is said that ancient towns which had many treasure were buried beneath the Taklimakan Desert.

An archaeological dig excavated mummies in the desert in late 1980s. These mummies can be dated back to more than 4000 years ago. Some of the mummies showed the Caucasoid features and many were on European twill fabrics. These mummies were preserved very well. One famous one is that of “Cherchen Man.” His reddish brown hair, long nose, full lips and ginger beard can still tell today. 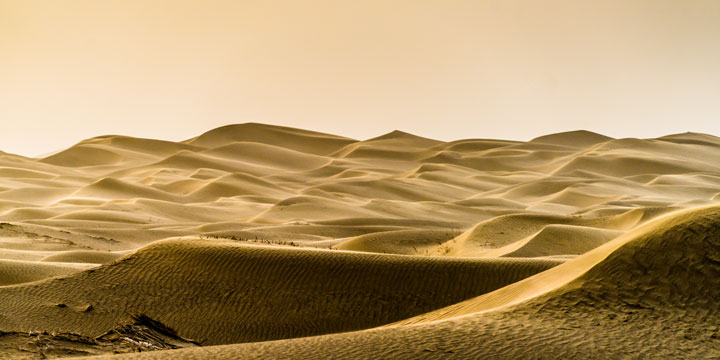 1. You’d better do some preventions of your photographic equipment, such as prevent sand, and prevent soil. Sticking scotch tape to the gap of your photographic equipment is necessary.
2. About making provision, you’d better take more fruit and vegetables. If you across the Taklamakan Desert in autumn days, since temperature may sudden drop to 0℃, you need to prepare some thermal cloth to keep warm.
3. Since crossing Taklamakan Desert is a large scale project, you need to special preparation for personal supplies. People with different requirement will consume different.