Dragon in the Forbidden City 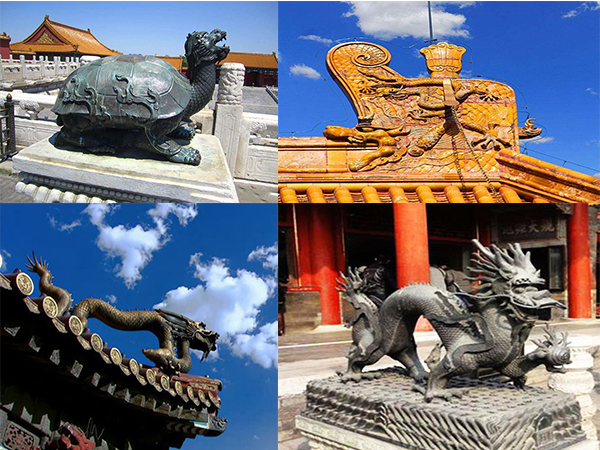 For the easier understanding of Chinese dragon in the Forbidden City, there are two things that may help you. Before your actual tour or photo tour in the Forbidden City, a map, paper or digital, is highly recommended, because the big size of the palace and its intricacy. The construction and decoration of the Forbidden City are applied with the principle of “nine and five”, and number nine and five have special meanings in Zhou yi, religion and beliefs. In Zhou yi, there are 64 hexagrams, and each hexagram has six horizontal lines( called Yao). The first hexagram is qian which refers to the heaven, and nine refers the yang yao, six refers the yin yao, while the fifth is the best yao, then the nine|five yao refers the flying dragon in the heaven, having the meaning of nobleness and honor. Based on the theory of Zhou yi, the Emperor is respected as the majesty of “nine and five”. In the Forbidden City, there are motifs with nine dragons and five dragons, which implies the nobleness of the Emperor.

Dragon in the Hall of Supreme Harmony 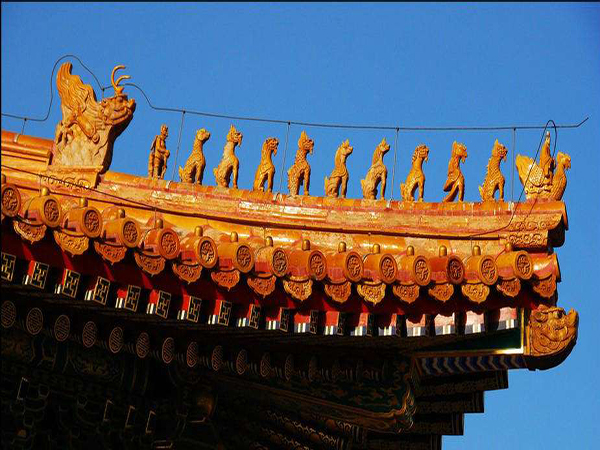 The Hall of Supreme Harmony is one of the most important and wonderful buildings in the Forbidden City, which is used for holding grand imperial ceremonies and great events, like the wedding of the Emperor and the ceremony of the Emperor’s ascending to the throne. Standing in the front of the Hall of Supreme Harmony, you can see lots of dragon ornaments on the doors, pillars, windows, and roof. In the base of this palace, there are many dragon heads used to drain away water, and those dragon heads belong to Chilong which is one of the nine sons of the dragon, with a big mouth and belly having a considerable capacity of water, therefore it is used as ornaments of drainage exit. In the event of heavy rains, all those dragons emit water, which is a splendid and magnificent scene. On the ridge of the Hall of Supreme Harmony stands Chiwen, which is one of the nine sons of the dragon and likes to swallow things and overlook distant places from a high stand. As such, it is usually put in the end of eaves on roofs to swallow evil sprits and protect houses from fire. In most of the buildings in the palace, you can see Chiwen standing on the roof and guarding the buildings. On the end of eaves of this hall stands ten immortal animals behind an immortal person.  Those immortal beasts are used for a good wish as changing the bad situation to the good. The first one is a dragon named Chiwen, and the sixth is also a dragon named Suanni which is also one of the nine sons of the dragon. Suanni, with an outlook similar to lion, likes being quiet and sitting down, and is fond of smoke, which is usually carved on incense burners . In the inside of the Hall of Supreme Harmony, stands the resplendent Dragon Throne, which is only for the Emperor, and it is made of wood, having a throne with thirteen dragons curling in the arm and a superb screen full of golden dragons behind the throne. Over the Dragon Throne, there is a grand ornament of dragon Panlong in the ceiling, which hangs one big ball and six small balls circling the big ball under the dragon’s mouth. The big ball tells the legality of the Emperor’s government, having an lengendary origin related with the Yellow Emperor. In this miraculous building, many ornaments of Panlong are carved on the pillars. Panlong is a kind of dragon in a curling gesture, which doesn’t go to the Heaven and stays in the human world. It is benevolent, and always brings benefit to human beings.

Dragon in Other Places 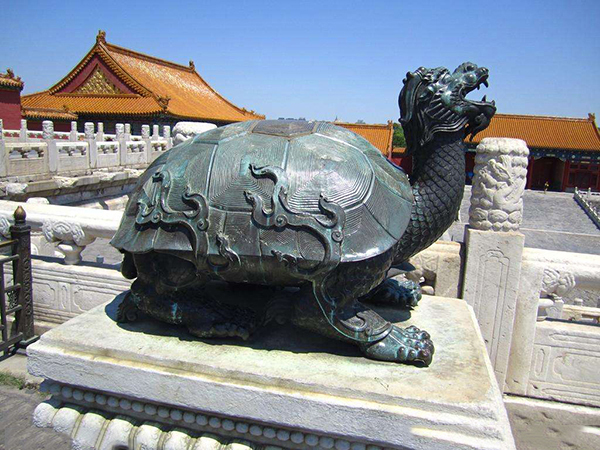 In the front of the Palace of Heavenly Purity where the Emperor handles government affairs and lives, there is a bronze tortoise with a dragon head, named Baxia which is not a common-see tortoise, and it is said that Baxia is one of the nine sons of the dragon. Baxia prefers to carry heavy things, and it has the metaphorical meaning of long life expectancy and perpetual and prosperous imperial government. Inside of this palace, there is a dragon throne, with a throne and a screen, but this dragon throne is not in the same level with the one in the Hall of Supreme Harmony. The throne has many dragons curling in the arm, and the screen is fully carved with dragons. Above the screen, there are two frames in a horizontal board, five dragons in one frame. All those dragons signify the supreme nobleness of the Emperor. 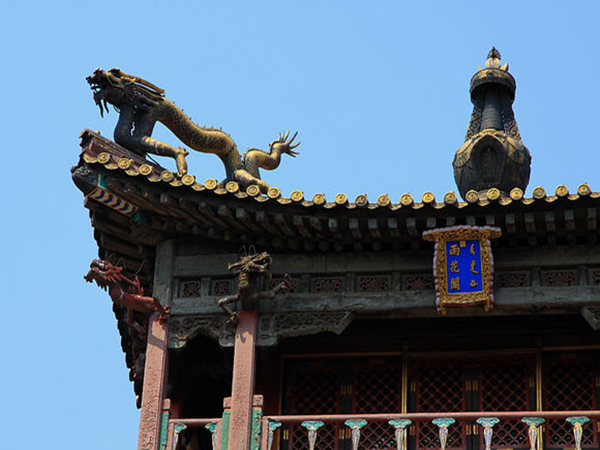 In the front of the Palace of Gathering Excellence stands a bronze dragon. Among the six eastern palaces and six western palaces where imperial concubines live, this palace is the only one having dragon, and Empress Dowager Cixi once lived in the Palace of Gathering Excellence. Dragon refers to the Emperor, and dragon motifs occur in things related with the Emperor, but this palace is not the living room of the Emperor, which makes this palace mysterious. The reason why there is a dragon is never officially stated. In the Tower of Raining Flowers, the biggest Buddhism building in the Forbidden City, there are four dragons with golden covers , stately standing on the four angles of the eaves, which are the guardians for this tower. In the Buddhism, the giant dragon protects Buddhism scriptures. 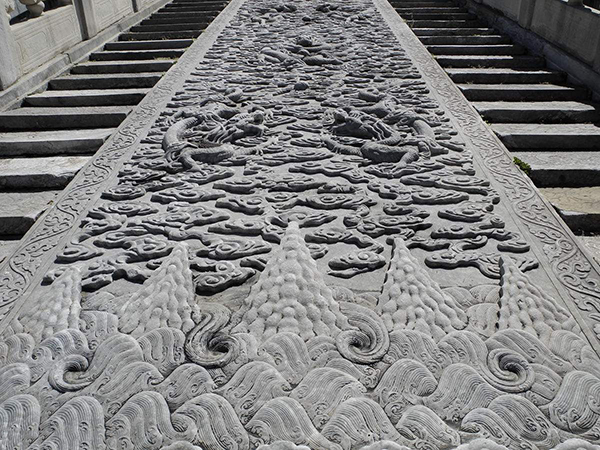 Behind the Hall of Preserving Harmony, there is a high stand with a leading road -three layers of steps, which is made specially for the Emperor. In the middle of the stairs, there is a giant stone carving, also called Yunlong Stone Carving which is made of white marble, with nine dragons, water, cloud and mountain motifs. The nine dragons are Panlong, and they are carved in a vivid moving gesture, playing balls. In the Palace of Peace and Longevity stands the famous Nine-Dragon Wall, and the dragons are also playing balls. You may observe that a ball usually occurs beside a dragon, or between two dragons, which is called “dragon playing a ball”. There are two explanations which may cast light upon this notion, one is that the ball is considered as the egg of a creature, the beginning of a being, and the dragon is protecting and caring the being, which reflects the notion of life awareness and reverence for life. Another one tells worship to the Sun, and the ball is a fire ball, referring to the Sun which rises from the east, while the dragon refers to azure dragon, the divine dragon in the east. The two has the meanings of worship to the Sun and dragon.

There are more than ten thousands of dragon ornaments in the Forbidden City, and those dragons’ position and number have special meanings which are mostly related to the Emperor, imperial authority, and noble statue. If you are interested in Chinese dragon and the Forbidden City, you may be immersed in the dragon world.