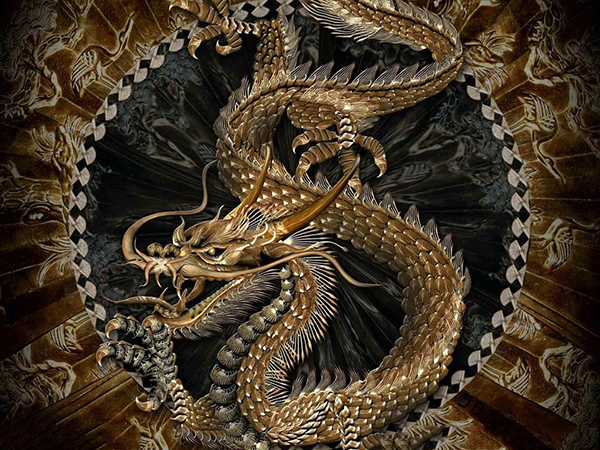 As a sacred thing loved by Chinese people, dragon is inclusive in Chinese all kinds of traditional art, like sculpture, painting, and embroidery. With various meanings, dragon appears in buildings, porcelains, and ornaments, and every thing you can image may be ornamented with dragon element.  All those art works reflect Chinese aesthetics, and Chinese people’s wisdom and love to dragon. 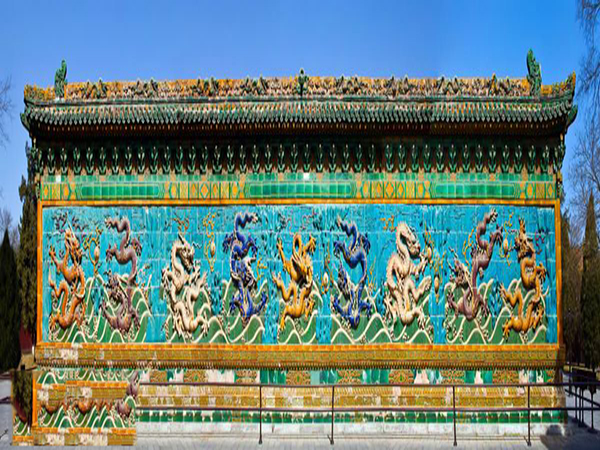 Dragon sculptures and carvings are made by craftsmen and through their flexible hands and supreme techniques, the simple materials are magically carved to vivid dragons having beautiful and lifelike physical appearances, as if they are injected with souls. The materials of dragon sculptures are usually wood and stone, and dragon element is carved in stone pillars, beams, and eaves in a house building, and the stone statue is put in the front of a house’s main entrance.

Those dragon sculptures and carvings usually appear in temples and in the houses of royal family, senior officers and the rich. Usually speaking, in the ancient China, the rich has money to buy those dragon sculptures and carvings, which are also used to show the owners’aesthetics, statue, wealth and pride. Temples are special places for worship and help to guard the good and expel evil spirits or ghosts, and they are the result of religion. Those buildings are sponsored by governments, or officers, or the rich, or the natives, which should be built gloriously and kept well for guarding and worship. Dragon is considered to have supernatural power and strongest ability to expel the evil, protect people and guard the sacred temples, which makes it a mascot to temples.

A Nine Dragon Wall is a wall scroll of nine dragons, and it is a superb masterpiece in dragon architecture art, which is considered as the highest artistic achievement in dragon wall carving. And there are three famous Nine Dragon Walls in China, one in the Forbidden City, one in Baihai Park, and one in Datong. The Nine Dragon Wall in the Forbidden City is made at the Palace of Peace and Longevity during the ruling period of the Qianlong Emperor (1772), and the single wall is 29.4 meters long, 3.5 meters high and 0.45 meters thick. Embossment is one of carving methods, which is applied to this Nine Dragon Wall, and all elements and figures are embossed in the wall. The background images are water and cloud, and blue and green are the main background colors.  The center of the facade is a yellow dragon, with a blue dragon, a white dragon, a purple dragon and a yellow dragon at its two sides. Each dragon has different gestures and facial and body features, and each of them is vivid as if they are alive.

The wall consists of 270 blocks, and 270 is the multiple number of nine and five, and the nine dragons are carved in five spaces, which are in line with the principle of “nine and five”. Nine is the biggest odd number, and five is the middle number in the numbers from one to nine. Nine is valued as the most noble, and five as the connector and mediator. Still, the deep meanings of nine and five are related with the Hexagram and the Emperor. Though the principle is related with the above things, it conforms to the aesthetics in architecture, and it is applied to architecture buildings in China. 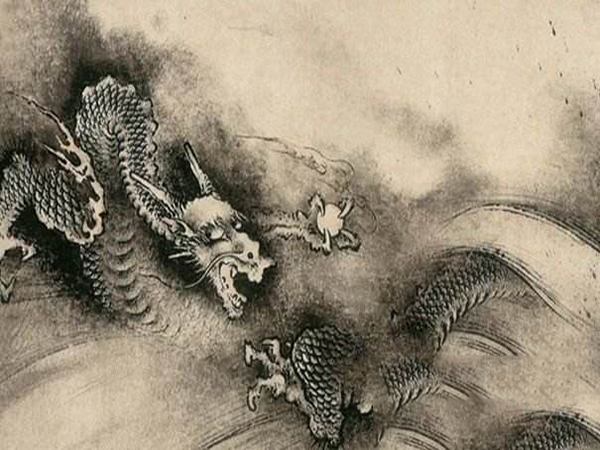 Dragon is a popular object of drawings, and there are many famous paintings about dragon. Ink wash painting is a style of Chinese painting, especially in ancient China, therefore famous dragon paintings of great value are that style, and the depicted dragon is called ink dragon.
The Nine Dragons painting is a scroll of a dimension of 46.3 cm × 1496.4 cm, and it depicts nine dragons with different facial and body looks, soaring in waters and mists. The painting perfectly captures the majestic power of dragons, and is prominent with dragons’ features. The scroll painting is created by Chen Rong, and is now collected in the Museum of Fine Arts, Boston. Chen Rong, is a painter in the thirteenth century, and good at painting dragons and has lots of paintings about dragons, whose Five Dragons Scroll is collected in the Nelson-Atkins Museum of Art. While there are other painters famous for their dragon paintings, such as Cao Buxing, and Zhang Zengyao. 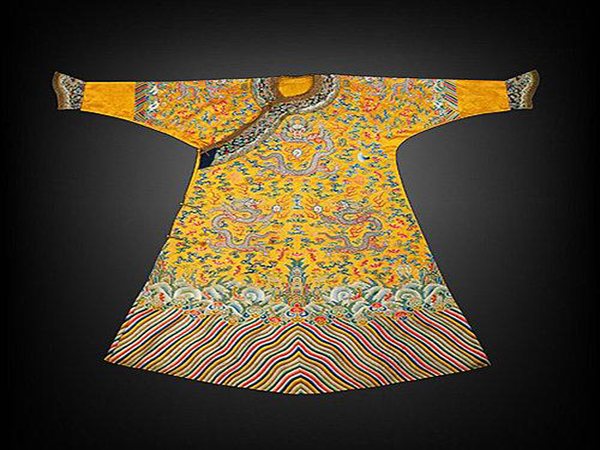 Dragon Robe is the formal dressing with dragon motifs only for the Emperor in solemn ceremonies or special occasions, which is made of silk and by embroidery and kesi techniques of Chinese silk tapestry, and the two weaving techniques make Dragon Robe exquisite and splendid. The color of Dragon Robe isn’t randomly selected, but meets the Five Phases or Wu Xing which is mainly about the relation of wood, fire, earth, metal, and water, and each of them corresponds to green, red, yellow, white and black. You may see many dragon robes are yellow, and this is because one emperor in Tang Dynasty makes yellow the color used only by the royal family, and this rule is followed and adopted by other emperors.

Dragon Robe usually has nine dragons, but there are exceptions, like twelve dragons. Nine dragons should be embroidered in their own fixed places, one in the chest, one the back, two in the shoulders, two in the front of knee place, two in the back of knee place, and one in the inside chest, and in this way, there will be five dragons whether it is saw from the front or from the back, which applies the principle of nine and five. Clothes with dragon motifs may be wore by the kinsman of the Emperor, or officers with the Emperor’s permission, while the color must be different from that in Dragon Robe, and the claws of dragons should be less.