Hong Kong is located on south coast of China, 60 km (37 mi) east of Macau on the opposite side of the Pearl River Delta, north to Shengzhen. It boards Guangdong city of Shenzhen to the north over the Shenzhen River, Wanshan Islands of Zhuhai in Guangdong Province to the south. It consists of Hong Kong Island, Kowloon Peninsula, the New Territories and other 262 small islands.

Originally Hong Kong was a small fishing village. Today, it is one of the world’s most cosmopolitan cities where the East truly meets the West. On 1 July 1997, Hong Kong became a Special Administrative Region of China in an arrangement that would last for 50 years. Operating under the 'one country, two systems policy', Hong Kong maintains its own political, social and economic systems. English remains an official language and Hong Kong's border with China still exists. Now reunited with the mainland, visually stunning Hong Kong offers a warp-speed 'shop till you drop' lifestyle combined with enclaves of tradition.

Hong Kong is a highly prosperous international metropolis  now, and one of the third largest financial centers in the world. Hong Kong is Asia's leading financial, services and shipping center. It is famous for clean government, good law and order, free economy and sound legal system. It is known as the "Pearl of the Orient", "Gourmet Paradise" and "Shopping Paradise".

Archaeological findings date the first human settlements in this place back to more than 30,000 years ago. It was first incorporated into China during the Qin Dynasty and mostly remained under Chinese rule until 1841 during the Qing Dynasty, with a brief interruption at the end of the Qin Dynasty, when a Qin official established the kingdom of Nam Yuet, which later fell into the Han Dynasty.

In January 1841, as a result of the defeat of the Qing Dynasty of China in the First Opium War, Chinese government was force into ceding Hong Kong Island in perpetuity to the British Crown under the Convention of Chuanpee, which was the beginning of British administration of Hong Kong. Since the 1842-1898, Hong Kong Island, Kowloon and New Territories have been ceded out in succession in two opium wars and the Sino-Japanese War. When peace terms were drawn up in 1841, the Emperor of China agreed that Hong Kong Island should be ceded to Britain and five other ports licensed for foreign trade. The British controlled Hong Kong from then on, apart from a four-year period during World War II when the territory was occupied by the Japanese. During the 1950s to 1990s, the city-state developed rapidly, becoming the first of the "Four Asian Tigers" through the development of a strong manufacturing base and later a financial sector.

Before the transfer of sovereignty to China in 1997, Hong Kong had been a British colony for nearly 150 years. As a result, most infrastructures inherits the design and standards of Britain. On 1 July 1997, under the principle "One Country, Two Systems", the transfer of sovereignty of Hong Kong from the United Kingdom to the People's Republic of China took place, officially marking the end of Hong Kong's 156 years under British colonial governance.

And now, Hong Kong is famous for its transition port, transporting a significant volume of exports from China to the rest of the world, and it is also an important city for financial trade, tourism, fashion and entertainment. Hong Kong is a popular tourist destination as well as being one of the world's major business centres. It has over 260 outlying islands but only a few are inhabited. This means that Hong Kong offers a great range of contrasts, with numerous islands that provide a tranquil alternative to its frenetic energy elsewhere. Hong Kong Island is an eclectic mix of modern skyscrapers, colonial buildings and traditional temples. 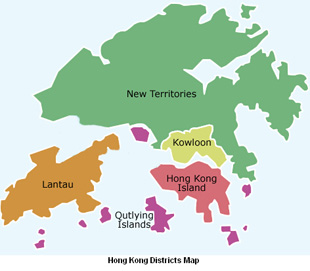 If you are interested, you can visit Hong Kong Geography for more info.

Hong Kong has a subtropical climate with high temperatures. The annual average temperature is 22.8℃. Summers is hot and humid with temperature between about 26℃~30℃; winter is cool and dry, but temperature rarely drops below 5℃. From May to September, is rainy season, and from July to September, there are typhoon often. In Hong Kong, there are high-rise concentrated and dense urban areas with densely populated, heat island effect occurs, which leads to significant temperature differences the city and suburbs.

• Best Time to Visit
Hong Kong is suitable for visiting all year around. If you must point out the best time to visit, it should be from September through to Christmas.

♦ October-November: weather is cool with less rain, quite comfortable.
♦ December-next March: it is discount season in Hong Kong, starting from the first weekend in December. The closer to Christmas, the more discounts you can enjoy. Shopping districts are mainly located in Tsim Sha Tsui, Mong Kok, Central and Causeway Bay and other places.

• Dressing Tips
The temperature of Hong Kong is not less than 10℃. The hottest can reach 37℃. Perennial temperature is between 23-27℃.
♦ Spring (March to mid-May): a light jacket or sweater is needed.
♦ Summer (late May to mid-September): short-sleeved shirt and cool pants or dress would be enough.
♦ Autumn (late September to early December): weather is sunny and dry. Shirt, sweater and light jacket would be fine. May to November is the typhoon season, remember to bring rain gear.
♦ Winter (mid-December to next late February): cool weather. Thick coat and thin sweaters is needed. If you go to the beach, you should bring more clothes.

♦ Further info about climate and weather in Hong Kong, you may visit Hong Kong Climate & Weather

Usually, the charm of Hong Kong to women would be shopping; to children should be the dreaming Disneyland. But the essence of Hong Kong tour would be its night view, you can a hangover in Lan Kwai Fong in Central; or riding the Star Ferry to enjoy the light show in Victoria Harbor; or take the Peak Tram to board the Peak to enjoy the overwhelming landscape of the night.

♦ Hong Kong Disneyland – it is the first in China, second in Asia and the 5th Disneyland in the world. There are some unique attractions, two Disney themed hotels, and the colorful shopping, eating and entertainment facilities in the park. If you travel with kids and you have never been to a Disneyland, it is suggested to spend a whole day there.

♦ Ocean Park- it is one of the most popular park in the world. You can not only see a variety of animals there, but also enjoy a lot of there are wonderful shows and have fun with exciting entertainment facilities.

♦ The Victoria Peak - Victoria peak is the highest point in Hong Kong, with an elevation of 554 meters, which make the best site to over view Hong Kong. It is located in the northwest of Hong Kong Island, and has been regarded as the symbol of Hong Kong. It is Hong Kong's most prestigious luxury senior housing area. No matter you are a romantic person or not, be sure to arrange the night tour on the Peak with a cable car travel, it will impress you a lot.

♦ Victoria Harbor - Victoria Harbour is the largest harbor in the Asia and the third largest in the world. The harbor is sited between Hong Kong Island and Kowloon Island. The Victoria harbor has been affecting Hong Kong's history and culture for a long time, leading Hong Kong's economic and tourism development. It is one of the critical factors for Hong Kong to being an international metropolis.

Traffic in Hong Kong is very developed. It can reach most of countries all over the world by air, rail or ship. And it is quite convenient to travel from mainland of China by air, rail or ship. Air travelers will be treated to Chek Lap Kok, Hong Kong's giant greenhouse of an airport. By land, the only way to Hong Kong is from China mainland: you can choose either bus or train. Water is perhaps the most picturesque way to arrive in Hong Kong; there are boats that take you between Hong Kong and destinations in Guangdong and Guangxi Provinces, as well as Macau.

Hong Kong International Airport is one of the top ten airports in the world. The passenger Terminal 1: it is the base of all aircraft, arrival hall, and counters of most airlines. Terminal 2 is counters of a small number of airlines, departure station of hotel bus and long-distance bus to China mainland.
♦ Website: www.hongkongairport.com/
♦ Tel: +852 2181 8888

Kowloon Railway Station (also known as the Hung Hom Railway Station) in Hong Kong has three train lines to mainland China, Kowloon-Beijing, Kowloon-Shanghai and Kowlong-Guangdong. The trains between Beijing and Hong Kong depart every other day. It takes 23 hours and 30 minutes for one-way journey. And it would take about one and a half hour to deal with customs formalities before departure, so make sure you arrive at the station more than 2-3 hours in advance.
Address: Chang Thing, Yau Tsim Mong District, Kowloon

Tourists can take ships or cruise to reach or leave Hong Kong. And the common way to travel between HK and Macau is by ferry from Hong Kong China Ferry Terminal or Hong Kong-Mauca Ferry Terminal in Sheung Wan.