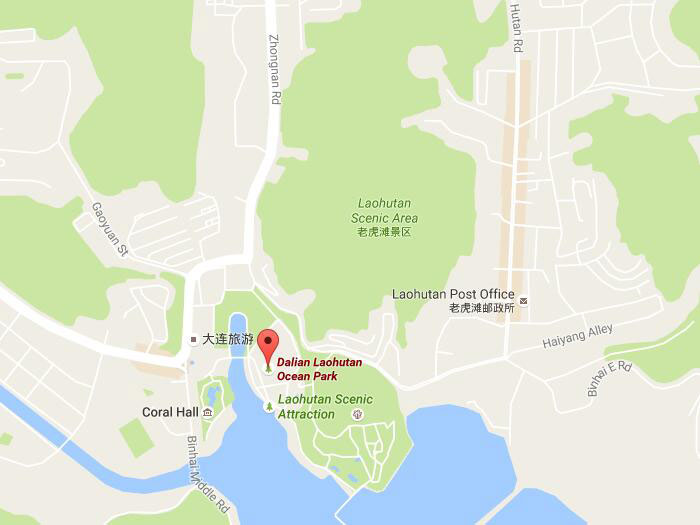 Tiger Beach Ocean Park is the largest modern ocean amusement park in China with thousands of birds, pigeons, white whales, sea lions and other wild animals coming from North Polar with an area of 1.18 million square meters and a coast line of more than 4,000 meters. It is sited in the south beach of Dalian, about 8 kilometers from downtown.

It is a good place to go with kids. You can not only introduce all kinds of sea creatures to your kid, but also enjoy the performances by sea creatures. Interesting!

As the largest ocean amusement park in China, Tiger Beach Ocean Park covers an area of 1.18 million square meters and a coast line of more than 4 km (3 miles). It features marine life from all over the world. Highlights include the world's biggest Polar Aquarium where you'll find marine animals from both polar regions including belugas, penguins, sea otters, polar bears and other creatures from these freezing climes, corals, Animal Show Arena, Bird Forest, Four-dimension Theatre, Bungee Jumping, Southpole Village, etc.

【Coralarium】
It is the largest Coralarium that shows coral reef in Asia. Here shows more than 200 species of coral reef. In the undersea laboratory area, you can find electronic album, periscope, electron microscopes, vacuum tank, underwater concerts and other visitors to participate in. in addition, one can also enjoy water ballet, mermaid shows, underwater dream wedding and other performances.

【Polar Museum】
Polar Museum is the only one in China and the biggest in the world mainly show the sea animal living in the polars. Visitors can watch the beluga whales, walruses, sea lions, fur seals, polar bears, penguins, polar emperor penguins and other rare animals in a simulated polar environment. In the marine life viewing area, visitors can see the tall crab, Leafy Sea Dragon, jellyfish, seahorses, Nautilus, grouper, sturgeons and other types of precious marine animals. Performances by large marine mammals are available in the theatre.

【The World of Birds】
Covering an area of 18 thousands square meters in the park, the World of Birds houses the largest birdcage in China, which displays around 150 species of birds. It is a semi-natural artificial cage. It takes a 43-meter high center post as bearing post, and other 18 fixed points on the mountain as pivots, which support a huge gray polyethylene net that covers half of the valley. That makes a natural home for the birds here. Excellent performances of birds can also be enjoyed.

【Marine Animal Hall】
The Marine Animal Hall inside the Tiger Beach Ocean Park is the world's largest marine hall with the largest floor-space and largest volume of water of any marine park. The Marine Hall is three levels high with every level holding marine life from not just the Dalian region but from all over the world. The bottom level of the marine park has a "360 degree aqua experience" in which visitors can experience life under the sea from every angle.

【Animal Show Arena】
There is an Animal Show Arena in the park, where daily shows performed by smartest and best-trained Beluga whale, dolphin, sea lions, seals and other animals are held. They treat audiences with amazing acrobatics. The arena can hold 1,200 spectators.

【4D Cinema】
This cinema holds 150 seats and plays movie by six huge projectors synchronously, forming a 180-degree circular screen movie. It makes use of the most advanced four dimensional film and television technology in the world. The special effects in the cinema provide audiences a feeling as in the environment. Different films all exploring life in and around Dalian as well as the undersea world that lays off its coast, not only is it in 3D but patrons may find yourselves sprinkled with a light shower of water!

【Tiger Sculpture Square】
The square features the largest animal sculptures made of granite in China. there are a rendering of six tiger sculptures which is 35.5 meters (38 yards) in length and stands at 6.5 meters (21 feet) tall.

【Chinese name】: 老虎滩海洋公园
【Best time to visit】: May to October is the best time to visit there. Winter is freezing cold in Dalian, if you want to see snow, traveling to Dalian in winter is a good choice.