Hong Kong is a comfortable place with pleasant sub-tropical climate, meaning that it can be temperate for almost half of the year; even during November and December there can be a pleasant breeze, some sunshine and comfortable temperatures. Many people regard these two months as the best time to visit Hong Kong, however, Hong Kong weather is famous for its unpredictability, and rain can turn to shine in a matter of seconds. The city also hosts some of the world's more extreme weather. In no particular order, Hong Kong weather warnings can be issued for; black rain, direct-hit typhoons, extreme heat, thunderstorms and landslides, but don't be put off, as the city is also blessed with plenty of sunshine for most of the year.
Cloudy January and February are comparatively colder with temperatures below 10 degrees Celsius. The lowest temperature recorded at the Observatory is 0 C, although sub-zero temperatures and frost do occur at times on high ground and in the New Territories. 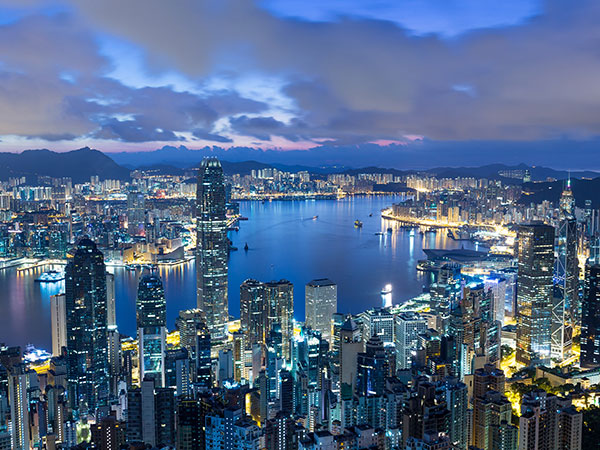 Spring time is pleasant beginning from March, though like any typical sub-tropical climate, weather in March and April is foggy, when sleet can be particularly troublesome on high ground which is exposed to the south-easterly winds, and air traffic and ferry services are occasionally disrupted because of reduced visibility.
Changeable weather is common from May to August. In this hot and humid season, occasional showers and thunderstorms may refresh the city in the morning,; and while it will be hot in the night, temperatures generally remain around 26 degree Celsius with high humidity. There is usually a fine dry spell in July which can last for one to two weeks or even longer in some years.
Hong Kong is most likely to be affected by tropical cyclones during July to September, although gales are not unusual at any time between May and November. On average, about 31 tropical cyclones form in the western North Pacific or China Seas every year, and about half of them reach typhoon strength (maximum winds of 118 kilometres per hour or more).
When a tropical cyclone is about 700 to 1000 kilometres southeast of Hong Kong, the weather is usually fine and exceptionally hot, but isolated thunderstorms sometimes occur in the evenings. If the centre comes closer to Hong Kong, winds will increase and rain can become heavy and widespread. Heavy rain from tropical cyclones may last for a few days and subsequent landslips and flooding sometimes cause considerably more damage than the winds.

Characters of the four season in Hong Kong

Spring brings warmer and more humid weather. There is a sharp increase in rainfall around April.
Summer weather is hot, humid and unstable. Thunderstorms and brief showers are common, interspersed with sunny conditions.
Autumn is generally considered as the most pleasant season. Temperatures are still high (20-27°C) while humidity and rainfall are considerably lower. 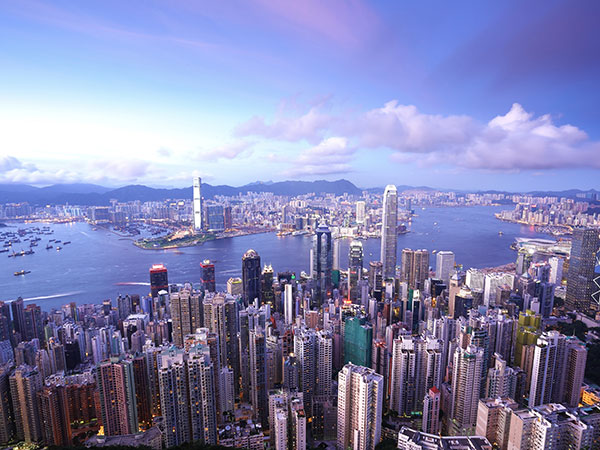 In winter, the weather is generally cool by local standards, with temperatures hovering between 15°C and 20°C.
The mean annual rainfall ranges from around 1300 millimetres at Waglan Island to more than 3000 millimetres in the vicinity of Tai Mo Shan. About 80 percent of the rain falls between May and September. The wettest month is August, when rain occurs about four days out of seven and the average monthly rainfall at the Observatory is 391.4 millimetres. The driest month is January, when the monthly average is only 23.4 millimetres and rain falls only about six days a month.
Severe weather phenomena that can affect Hong Kong include tropical cyclones, strong winter monsoon winds, and thunderstorms with associated squalls that are most frequent from April to September. Waterspouts and hailstorms occur infrequently, while snow and typhoons are rare.
Climate Data Table for Hong Kong

Best time to visit Hong Kong
The peak travel season is from September through to Christmas time.
June through to September can be very hot months, and September through to January can be an ideal to time to consider visiting. Hong Kong rainfall is probably the most important consideration when planning what clothes to pack before travelling to Hong Kong, though remember, it IS the ultimate shopping city, and umbrellas are cheap.