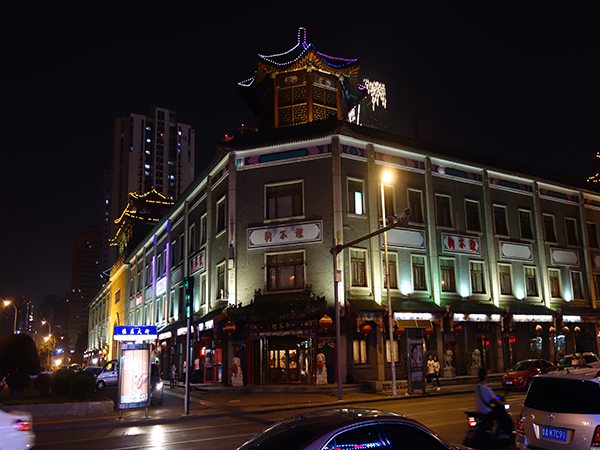 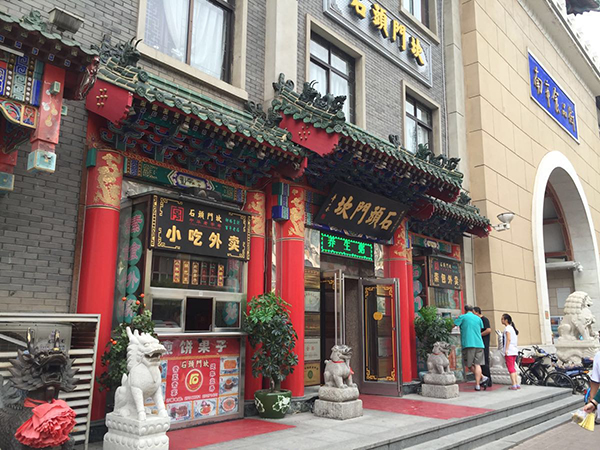 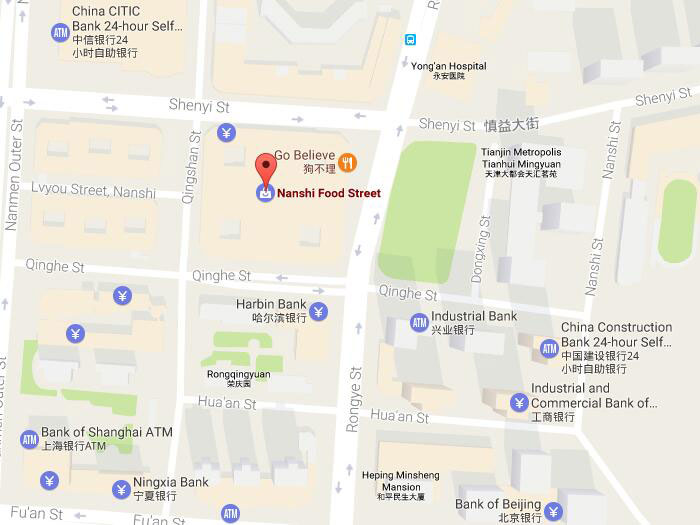 
Located in the busiest section of the city's downtown area of Tianjin, Nanshi Grocery Street (Chinese name: 南市食品街) is a famous calling-card of Tianjin in the aspect of cuisine. Tianjin Food Street is located in the downtown business district of Nan, east of Commercial Street on Peace Road, west to Clothing Street and north of the Drum Tower and Ancient Culture Street across the street. Tianjin grocery Street runs dining, shopping, travel and entertainment business is currently the largest concentration place of restaurants. In 1989, it was listed into one of the top ten attractions of Tianjin City. It is also a marvelous gastronomic wander.

Tianjin Nanshi Grocery Street was built in l984. The food street is surrounded by the high gray walls, forming a positive square area. Two cross streets in this area divides the food street into four partitions and most of the buildings along the street have the food three storey. The second layer is connected by a circle winding corridor. The first layer has a variety of stores of local flavor snacks. This street looks like an ancient walled city enclosed by a circle of neat three-story buildings. Inside the city is a cross pattern street and at the crossing. There is also a music fountain in the street. The whole building has 3 floors with a glass roof. There are 4 gates, that is, "the zhenyu Gate ", "the Zhongsheng Gate", "the Xingge Gate" and "the Huayu Gate". They are all ancient buildings with Qing style, 24.5 meters wide and 16 meters high. Covering an area of 40,000 square meters, Nanshi Grocery Street houses over 100 shops trading in delicacies from across China, all of which have their characteristic food with strong local features. The Chinese food includes Zhe food, Chuan food, Cantonese food, Lu food, Su food, Xiang food, Tianjin food and Jin food and foreign food includes Japanese food, Italian food, Russian food, German food and French food.

One could be attracted by the buildings itself, which carry a kind of classical ethnic beauty with green glazed roof tile, colored vivid pattern compel the admiration. It is a must visit attraction in Tianjin city. Here you can experience the local people’s life and learn the local customs.

【Ear-Hole Fried Cake】
Ear-Hole Fried Cake (Chinese name, Erduoyan Zhagao, 耳朵眼炸糕) another one of the famous traditional Tianjin snacks. The cake is made of carefully leavened and kneaded glutinous rice dough. The filling is bean paste made with good-qualified red beans.