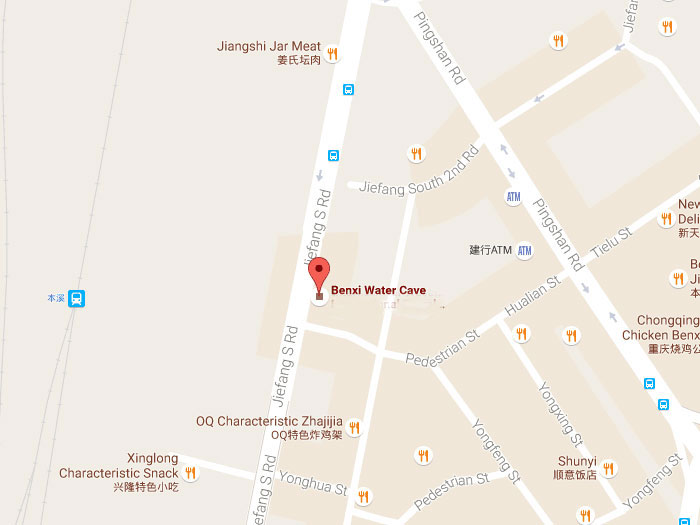 The longest cave with water in the world.

Benxi Water Cave Scenic Area is located in the eastern suburbs of Benxi City, Liaoning Province, China. It is only 28 km from Benxi downtown, is the longest underground water-filled caves found in the world so far. The water cave contains the world's longest underground river at 5.8 kilometers. Of this, only 2.8 kilometers are accessible by boat. Benxi Water Cave Scenic Area was opened to public in 1983, being a national key scenic spot. It is consists of Water Care, Spring Temple, Water Ditch, Guanshan Mountain, Tiesha and Miaohou Hill six scenic spots, distributing along Taizi River. This scenic spot covers a total area of 42.2 square kilometers, of which water cave covers a area of 36,000 square meters with a total length of 2,300 meters. The scenic area take water cave as the main watching point, combining hills, rivers, caves, springs, lakes and ancient cultural sites as a whole.

【Hot Spring Temple Scenic Area】
The temperature of the hot spring here is about 44℃, with daily flow of 400 tons. It is said that the spring water has high medical value.

【Guanshan Hill】
Guanshan Hill there is known as "Northeast Little Yellow". There is rich in tourism resources.

【Miaohou Hill Scenic Area】
There are 12 ancient cultural sites here, including ancient Paleolithic cave sites of Northeast China. it is has an important value to study the distribution of ancient human in Liaodong, as well as ancient geography.

【Tiesha Hill】
Tiesha Hill is the birthplace of Taoism in northeastern area. The highest peak has an elevation of 700 meters. It is famous for Yunguang Cave. The stone dragons and stone tigers here are all natural wonders, vivid and amazing.

In the 570 million years ago, Benxi Water Cave area was a vast ocean. This period had warm climate, a lot of stone bamboos, brachiopods, gastropods and animal bred quite fast. Each family group all grow conforming to the laws of nature themselves. Due to the panning and mill by turbid water, their shells sink. Then the deposition of different types of biological carbonates gathered here. Limestone in Benxi was developed by lithification in this period. Later, due to crustal movement, the sea receded. Therefore, this place was promoted to the land slowly. Limestone was eroded constantly by the dissolution under external force. Over time, after millions of years, it gradually developed into today's water cave. In addition, this dissolution is still continuing. One can imagine that, after a few million years, the strange landscape of Benxi Water Cave will be more beautiful and majestic.

【Chinese name】: 本溪水洞
【Best time to visit】: The temperature in the cave remains a constant 10℃. Sweaters and pants are highly recommended while inside the cave. May to October is the best time to visit, when the climate is comfortable. November to March in following year is very cold in this area.
【How to get to Benxi Water Cave using public transportation】: You may take high-speed train from other cities, such as Dalian or Shenyang, to reach Benxi first, then transfer to Benxi Water Cave Scenic Area by bus at Benxi Bus Station. It take about 45 minutes from Benxi Bus Station to the cave.