What Not to Give as Gifts for Chinese New Year 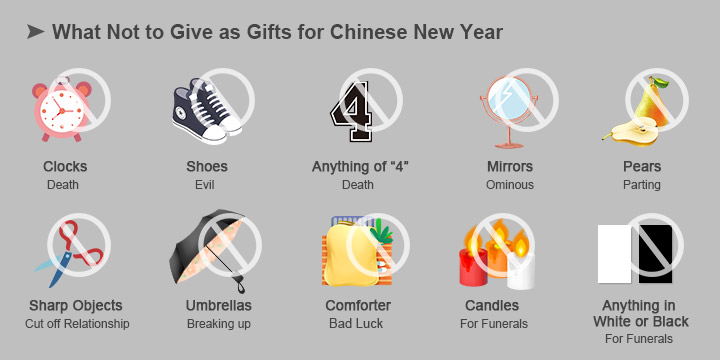 The word “clock” (钟 Zhōng)  and “end” (终 Zhōng) are homophones. In Chinese, “giving clocks as gifts”(送钟Sòngzhōng) sounds the same to “attending a funeral”(送终Sòngzhōng). Never buy clocks or watches as Chinese New Year gifts, especially for seniors. Even though it’s a delicate and expensive gift, your Chinese friend won’t be happy to accept it.

In Chinese, the word “shoe” (鞋 Xié) and “evil” (邪 xié) are homophones. It’s ominous to give someone a pair of shoes as a gift for Chinese New Year, for the unlucky meaning of sending evil to the receiver.

Additionally, since you wear the shoes for walking and running, it implies that you want the receiver to keep away from you. Thus, don’t send shoes to your friends or loved ones, or else they will end the relationship with you.

In Chinese, “4” (四 Sì) sounds similar to the word “death” (死 Sǐ), so Chinese people consider this number is ominous. It’s impolite to give any gifts related to number “4” to your Chinese friends, no matter it’s Chinese New Year or not.

In Chinese culture, the right quantity of gifts is as important as the value of your gifts, because Chinese people is really serious about the number. Try to avoid giving gifts in sets of four, instead, choose some lucky numbers like two, six and eight.

For mirrors, it has nothing to do with the pronunciation or meaning. In China, there are lots of ghost stories about mirrors, so people believe that mirrors will attract ghosts to the house. It’s unlucky to give or receive mirrors as gifts.

According to the traditional Chinese culture of Feng Shui, if you put mirrors in a wrong position in your house, evils will come around. Besides, as mirrors are fragile and easily broken, giving mirrors indicates relationship breakdown. It’s not a good idea to choose mirrors as Chinese New Year gifts.

It’s a good idea o give fruits as Chinese New Year gifts, but you’d better avoid choosing pears. In Chinese, the word “pear” (梨 Lí) and “parting” (离 lí) share the same pronunciation. If you give your friends pears, they might think you wish their family to be separated, or you want them to keep distance from you.

Giving gift is a good thing, but a wrong gift will hurt the receivers’ feelings. Try not to pick sharp objects like knives and scissors as gifts for Chinese New Year, it’s a sign that you want to cut off the relationship with the receiver.

In Chinese, the word for “umbrella” (伞 Sǎn) sounds the same to the word for “breaking up” (散 Sàn). With an ominous implication of separating from friends and families, umbrellas, just like what we mentioned about pears, are unlucky gifts which you should not give as Chinese New Year gifts.

Speaking of a comforter, it’s warm and soft. What’s wrong with a comforter? Well, comforter, 被子(Bèizi) in Chinese, sounds like “unlucky”(背 Bèi). As a result, if you send someone a comforter as a gift for Chinese New Year, they might think that you wish them have bad luck for the next year. If you don’t want to lose your friends, you shouldn’t pick a comforter as gift.

In western culture, candles represent love and romance, and many people like to use candles in their daily life. However, it’s totally different in Chinese culture, it’s a bad idea to choose candles as gifts, especially white candles. Because people use candles for funerals, or worshiping their ancestors.

Even though you can see some shops in China selling aromatherapy candle, it isn’t widely use in China. Maybe some young people won’t mind it, it’s inappropriate to give during Chinese New Year.

10.Anything in White or Black —— For Funerals

Color of your gifts also matters. Usually people won’t be too serious about the color when they receive a gift. But if it’s for Chinese New Year, you have to pay attention to the colors. You’d better not choose any objects in white or black, there are mainly used in funerals. On the contrary, try to choose some lucky colors that Chinese people love, red color will be great. 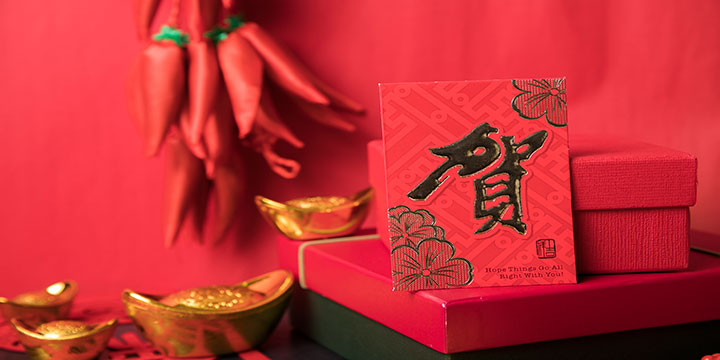 Red Color will be Great

If you want to experience Chinese Lunar New Year, please view tours below and start your planning. 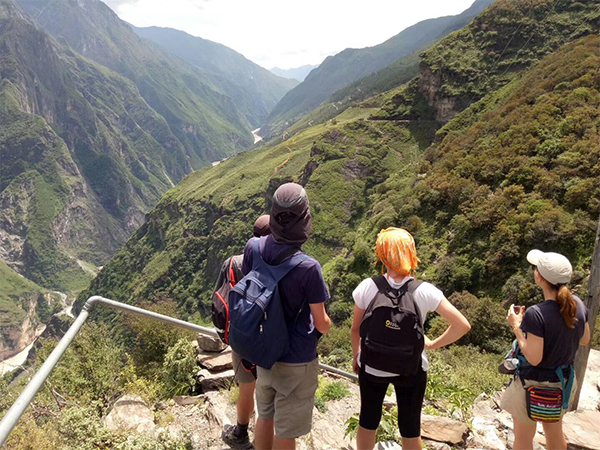