Most Famous Museums in China

It is a good way to learn about Chinese Culture and history by visiting the museums in different regions of China. In western museums, one can also see many Chinese culture treasures, but most of them are removed from the original matrix of their being. Go to Chinese native museums, you will enjoy a systematic and complete experience of Chinese culture and history. Hereinafter, offering 7 top famous museums of China for you reference, hope it is useful.

Forbidden City, also called Imperial Palace Museum, is located in the very heart of Beijing. It remained the residence of the emperors for nearly five hundred years, from the 15th century to the early 20th century, and was the actual and symbolic seat of imperial power. Popularly known as the Forbidden City, it was built in the Ming Dynasty between the 4th and the 18th years of the Yongle period (1406 - 1420 AD). Many of the buildings of the Palace have been repaired and rebuilt, but their basic form and layout remain in their original state.
Forbidden City can be taken as a sample of the traditional Chinese palatial architecture. In 1987, it became a World Heritage Site. Besides, it is also listed by UNESCO as the largest collection of preserved ancient wooden structures in the world.
This magnificent, palatial architectural complex covers an area of over 2,350,000 square feet and contains 9,999 rooms. The largest complex of its kind in the world, it is surrounded by ten-foot-high walls that are crowned by four observation towers and flanked by a deep moat. The walls are pierced by four large gates, each with three openings and a broad crowning pavilion.
► Related information Map of forbidden city 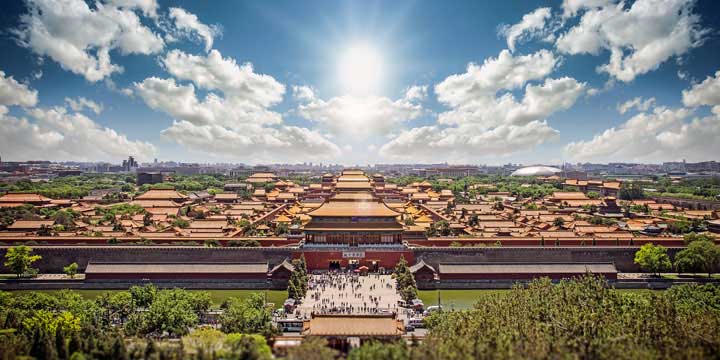 The National Museum of China is situated at the east side of the Tiananmen Square in Beijing. It is an integrated national museum focusing on both history and art of China. In the mean while it is dedicated to exhibition, research, collection, archaeology, culture communication and public education. The Museum was founded in 2003, after merging between the former National Museum of Chinese Revolution and the National Museum of Chinese History.
The National Museum has 48 exhibition halls in total. The main basic exhibitions are the Ancient China and The Road to Rejuvenation which display nearly 3,000 historic materials from Yuanmou Man who lived in 1,700,000 years ago to the abdication of the Emperor Qin Shi Huang in 210BC.
This part takes 10 exhibition halls. There are also 9 exhibition halls displaying modern and contemporary revolutionary relics since the First Opium War in 1840 to the founding of the new China in 1949.
The museum treasures the topmost level’s cultural relics of the whole China. Among these cherished relics, the oldest one is the teeth of Yuanmou Man who lived in 1,700,000 years ago. You can also found stone tools, and ancient jade ritual objects in prehistoric times. The top treasure of the museum is Simuwu Rectangle Ding, which is also the biggest piece of Bronze wares in China. It is the image of he National Museum.
The New buildings of the museum, which constructed during the latest renovation project, include some banquet room decorated with brick, bronze, stone carvings and wood. The new National Museum also has some shops offering coffee, tea and souvenirs to visitors. 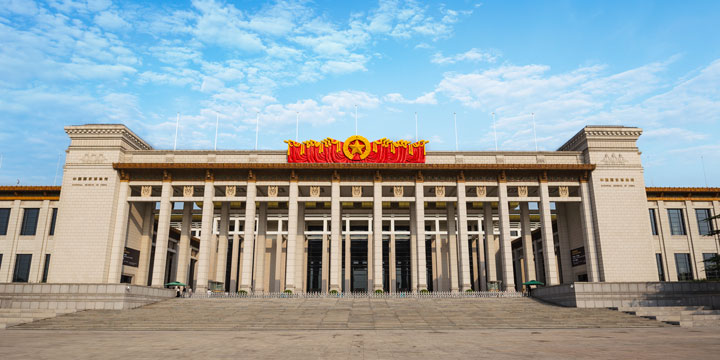 Shanghai Museum is a large museum of ancient Chinese art. Founded and first open to the public in 1952 and then moved into the former Zhonghui Building in Henan Road in 1959. In 1992, the Shanghai municipal government allocated to the museum a piece of land at the very center of the city, the People Square, as its new site. This magnificent new Shanghai Museum was open in its entirety to public in 1996, with eleven galleries and three exhibition halls in a space of over 10,000 square meters. With bronze ware, ceramics, and painting and calligraphy as its distinctive collections, the museum boasts 120,000 pieces of rare and precious cultural relics in 21 categories.
This grand new building, structured with a square base and a circular top with four arch-shaped handles erected on it, symbolizes the perfect fusion of China traditional cultural and the spirit of modern times. When viewed from above, the circular top with a glass dome in the center looks like a huge broze mirror of the Han Dynasty. When viewed at a distance, the whole building resembles an ancient bronze Ding tripod, shouldering in silence the heavy weight of the 5,000-year Chinese history and civilization.
The southern entrance of the Shanghai Museum is flanked by eight dignified mighty animals in white-marble sculpture, each with a height of close to three meters and a weight if about 20 tons. These eight sculptures were molded and magnified after the prototypes carefully selected from over 300 stone and bronze sculpture relics of the Han, Sui and Tang Dynasties collected by the interior decorations of the museum.
As a special tour and guide service to regular visitors, the museum offers an audio tour of the museum's finest exhibits making use of the digital random access technology available in eight languages. With the help of this modern electronic commentary and interpretation guide, visitors will better enjoy the artistic beauty if the select works of ancient culture at their own pace while touring around the museum. 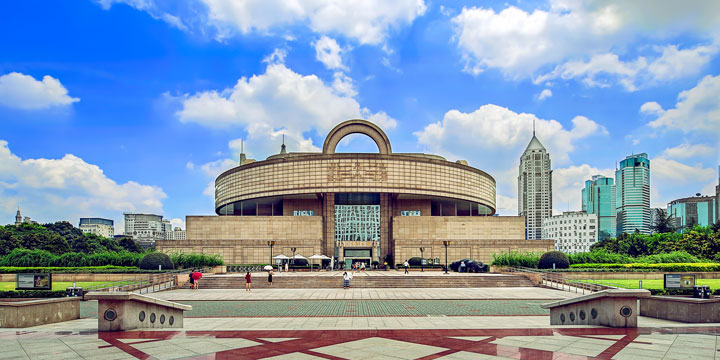 In the southern part of Xi'an about one kilometer northwest of the Greate Wild Goose Pagoda stands the Shaanxi History Museum, a large State-grade Museum, which covers an area of seven hectares. It consists of a group of magnificent Tang-style palaces.

As the regional capital and doorway to the Silk Road, Xian was one of the richest, most well-protected cities in all of China. The famous Shaanxi History Museum introduces the visitor to area rich culture, from Emperor Qin Shihuang to the present day in this walled city. The museum is house in a striking Tang Dynasty-style pavilion and features an enormous collection of 113,000 historic and cultural relics. This is where you experience history, with chronological dynasties exhibits that take you through the Han, Wei, Jin, Sui, Tang, Song, Yuan, Ming and Qing dynasties. It is an ideal place for learning about the origins and development of ancient Chinese history.

Constructed from 1983, this history museum was opened to the public since 1991. Taking a Tang style architectural art, Shaanxi History Museum conveys an idea that “hall in center, storied buildings in corners". It is an elegant building that mixes the traditional and modern technology harmoniously.
And today, besides the ancient Chinese collections are displayed, this museum also provides a platform to exhibit relics from overseas cities including Japan, France, the United States and Germany. 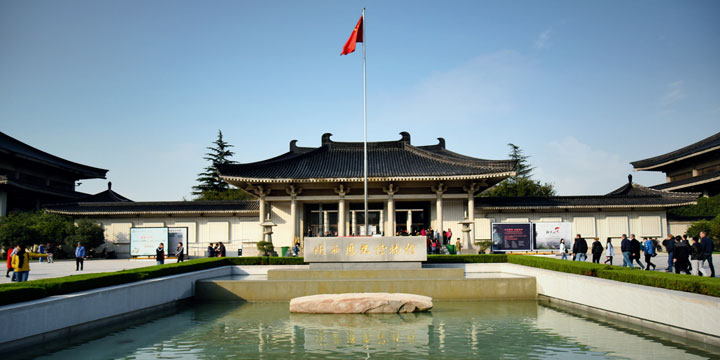 The Nanjing Museum, located inside the Zhongshan Gate of Nanjing, is a complex of buildings that is modeled after Liao Dynasty palace.
There are 400,000 artifacts in the museum various collections, some of which are very precious to China history such as the set of jade suit sewed with silver thread. Some of the amazing artifacts come from the excavation of Chu State tomb from the Warring States period of Chinese history.
One of the highlights of the museum would be the calligraphy and painting collections. Out of about 100,000 pieces of work in these collections, most are from the Jiangsu area during the Ming and Qing dynasties such as 'Wu Men painting school', 'Yangzhou painting school', and 'Jinling painting school'. Most of the works of the modem Chinese painter Fu Baoshi (1904-1965, painter, art historian) and Chen Zhifo (1896-1962, modern arts educator) are displayed here.
The Nanjing Museum also holds the objects excavated during the early part of the twentieth century. These include excavations in Heilongjiang, Xinjiang, Yunnan. Sichuan, Gansu and other places. Collections also include artifacts from the southwest parts of China of the Naxi tribe, the Yi tribe, the Miao tribe, and other Chinese minorities. 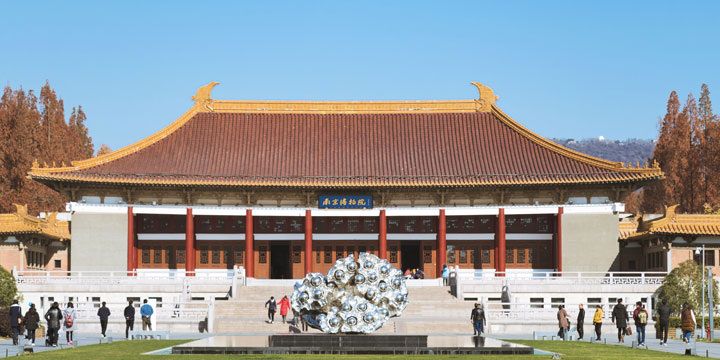 Originally built by King Songtsen Gampo in the seventh century, Potala Palace is located on the Red Hill of Lhasa. The awe-inspiring Potala Palace, perched high above much of Lhasa, is the landmark of the city.
Destroyed by lightning and war, Patala Palace had been rebuilt by the Fifth Dalai Lama in 1645 and since then, it has become the seat of Dalai Lamas and also the political center of Tibet. The 13th Dalai Lama extended Potala Palace to the present size-117 meters in height and 360 meters in width, covering an area of more than 130,000 square meters. Mainly comprised by the White Palace, the administrative building, and the Red Palace, religious building, Potala Palace is famous for its grand buildings, complicated constructions, devotional atmosphere and splendid artworks.
The stone-and-wood-structured Potala Palace consists of the White Palace and Red Palace. The White Palace, comprising halls, temples and courtyards, serves as the living quarters of the Dalai Lama. The Red Palace includes various chambers for worshipping Buddha and chambers housing the eight stupa that contain the remains of fifth through thirteenth Dalai Lama. All the stupas are covered with gold foil. The most magnificent stupa belongs to the fifth Dalai Lama. It is 14.85 meters tall and inlaid with pearl and jade. The palace also collected a large number of sculptures, murals, scripture and other valuable cultural relics.
There are also many other constructions in Potala Palace which include: the school of Buddhist Logic, the Seminary, the printing house, gardens, courtyards and even the Jail. For more than 300 years, Potala Palace has treasured many culture relics such as murals, stupas, statues, tangkas, and rare sutras. Potala Palace is indeed a must see in Lhasa. 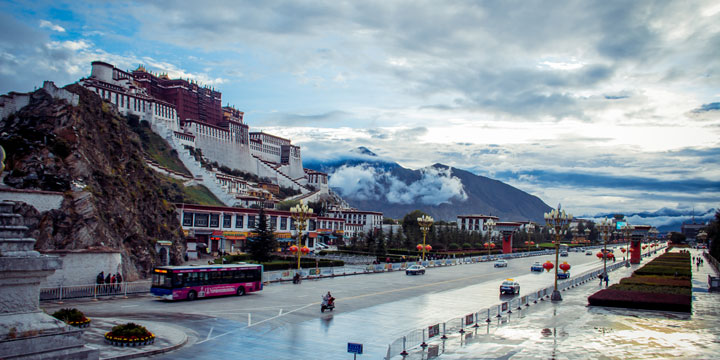 Outside the exhibition hall are green lawns and shadowy trees. Also there are a performance area for modern cultural and physical activities, a garden of local customs and folk culture and manor houses. In addition, Tibet Museum has a cultural gallery, handicraft shop and other service facilities. It is a good place for people to relax while visiting the exhibition 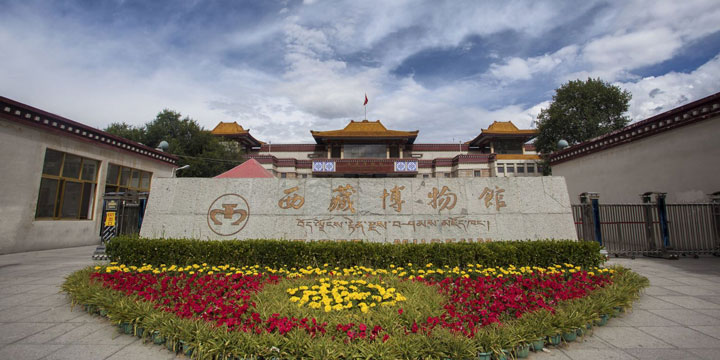 Visiting museum is a good way to look through the history and culture. The museums listed above are the most famous museums in China. Some treasures exhibited in the museums are exquisite, which are used by Chinese emperor. To extent your horizon, museum is a must of your trip.
► Related Information for Museum in China:
More Attractions in China