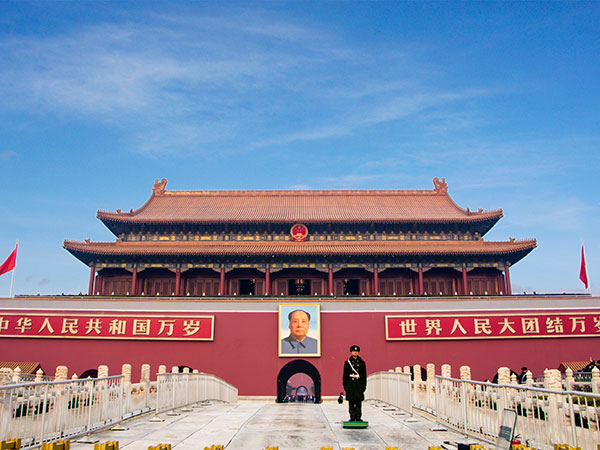 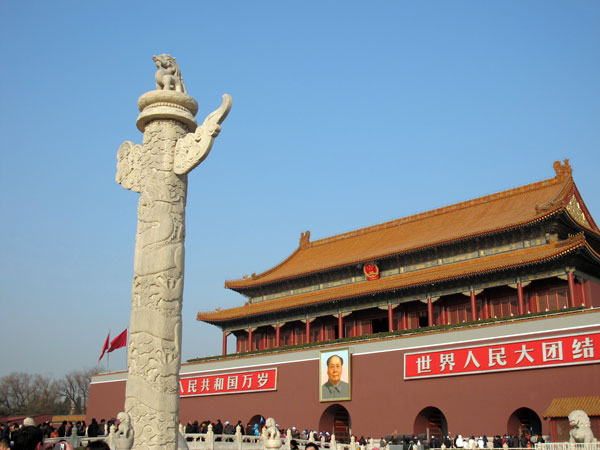 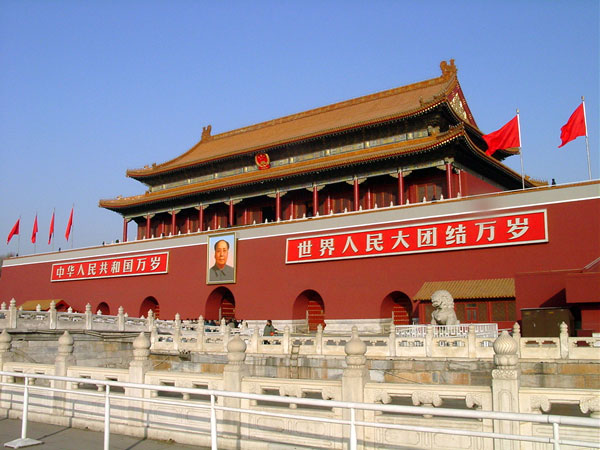 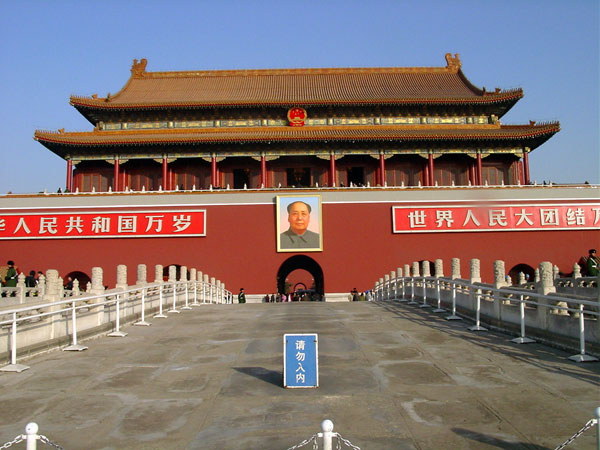 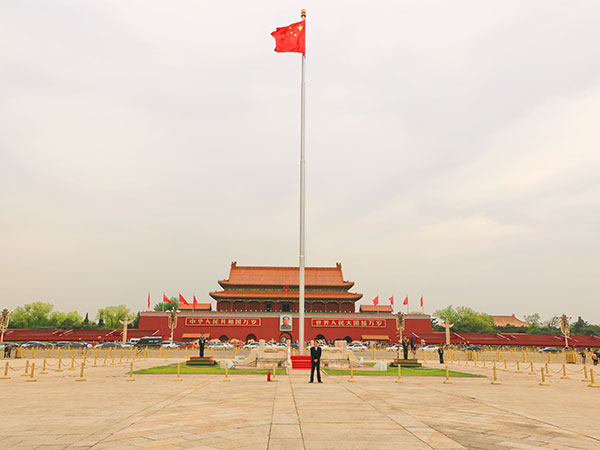 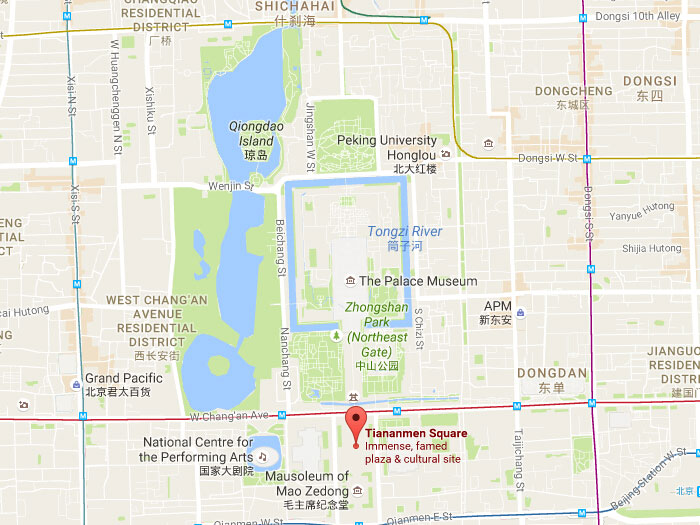 Tian'anmen Square, the heart of Beijing, is the world's largest city center square. The ground of the square is all paved with specially processing light-colored granite stone. The ceremony of raising the national flag in every morning and dropping flag in every sunset time is the most solemn ceremony. Tian'anmen Square was the locality of numerous major political and historical events. It is the witness of Chinese development. While strolling in Tian'anmen Square, looking up at the magnificent layout, the majestic momentum, the vast and deep landscape, you will feel China's rapid development. Tiananmen Square is the Holy Land in the hearts of the Chinese people, and is the heart of great China.

Location and Layout of Tian'anmen Square

Tian'anmen Square starts from Tian An Men from the north, and south to Zheng Yang Men, east from the Museum of History, west to the Great Hall of the People. It covers an area of 44 hectares, and it is 500 meters wide from east to west, 880 meters long from north to south.

The center of the square stands the Monument to the People's Heroes and solemn Chairman Mao Memorial Hall, the west side of the square is the Great Hall of the People, the East side is the Museum of the Chinese Revolution and the Museum of Chinese History, the south side are two ancient tower which was built in l4 century - the Zheng Yang Men and Qian Men Embrasured Watchtower. The whole square is magnificent, neat and symmetrical. On both sides of the Tian An Men are the Working People's Cultural Palace and Zhongshan Park, these majestic buildings along with the Tiananmen integrally constitute Tian'anmen Square, and become a major attraction in Beijing.

Tian'anmen Square was a royal square in the outside the main entrance of the Forbidden City in Ming and Qing period. No place in modern history has so touching contact with Chinese people's emotional world like the Tiananmen Square.

1) On May 4th, 1919, the May Fourth Movement broke out here, the Chinese people to declare war on imperialism and feudalism.
2) On December 9th, 1935, the 12·9 Movement broke out here, which was a large scale students' patriotic movement leaded by Chinese Communist Party.
3) On October 1st, 1949, Chairman Mao Zedong declared the founding of the People's Republic of China, and personally hoisted the first five-star red flag in Tian'anmen Square to say good-bye to the humiliation and slavery. Since then, Tian'anmen has become a symbol of the new China, and its solemn image has been an important part of China's national emblem.

Tian'anmen Square is the largest city square in the world today. It has not only witnessed the Chinese people's struggle for democracy, freedom, against foreign aggression and reactionary rule, but also is important place for major celebrations, grand assembly and Foreign Affairs meeting place.

After the founding of the People's Republic of China, Tian'anmen Square has experienced three large-scale reconstruction and extension project, which make the ancient square more magnificent and become the cohesion of the Chinese nation and the symbol of Chinese prosperity. 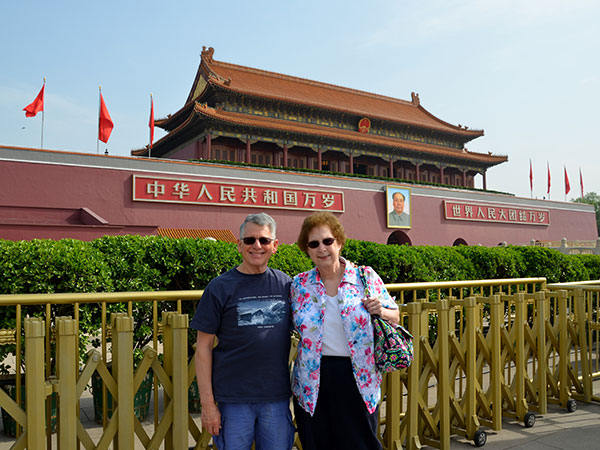 【Chairman Mao Memorial Hall】
Chairman Mao Memorial Hall was built to commemorate the leader Mao Zedong. It is located in Tian'anmen Square, to the south the People's Heroes Monument. This memorial hall was completed building on May 24, 1977, covering over 57,000 square meters, of which total construction area is 28,000 square meters. The main building of it is square; outside of it has 44 yellow granite building columns. Between columns have floral Guangzhou Shiwan ceramic plates. There are two layers of glass roof cornices, and there are sunflower reliefs between eaves inlay. The hall is 260 meters long from north to south and 220 meters wide from east to west.

【The Great Hall of the People】
The Great Hall of the People is situated on the west of Tian'anmen Square, the world's largest open square, opposite the Museum of Chinese Revolution and the Museum of Chinese History on the east. On the north and the south are located Tiananmen and Zhengyang Gate in Tian'anmen Square. It is 46 meters high, 336 meters long and 206 meters wide. The gross floor area of it is seventeen thousand square meters, bigger than the Forbidden City. This is the place where holds national political, diplomatic, and cultural activities of China. The Central Hall, Auditorium, National Reception Hall, Welcome Hall and Ballroom are the main site in the Great Hall. 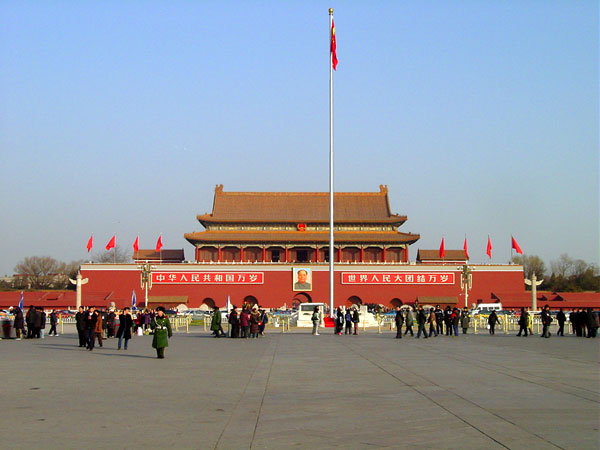 How to get to Tian'anmen Square

The most convenient way is by public transpot. You may take Subway Line 1 and get off at Tian'anmen East Station or Tian'anmen West Station. Then walk to reach the square area.