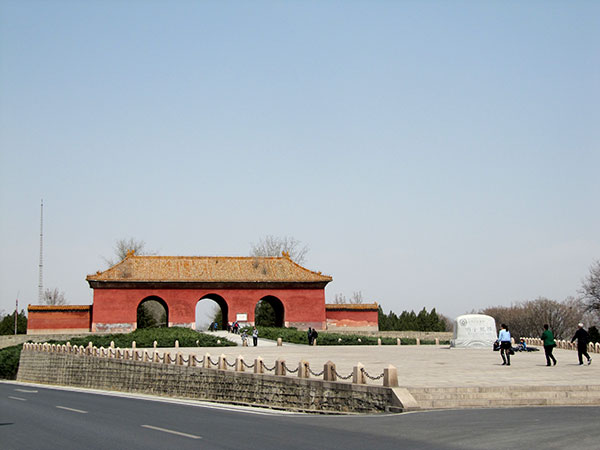 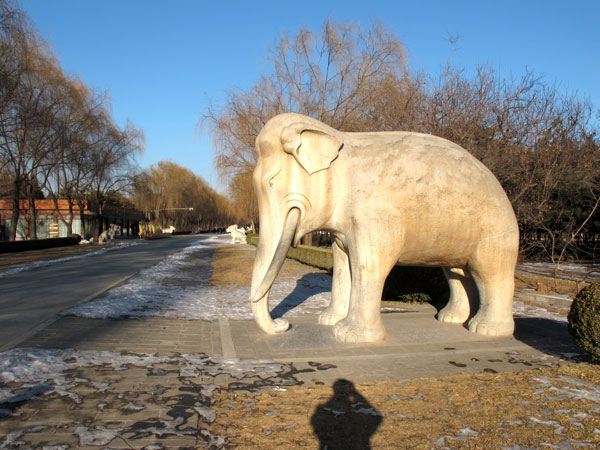 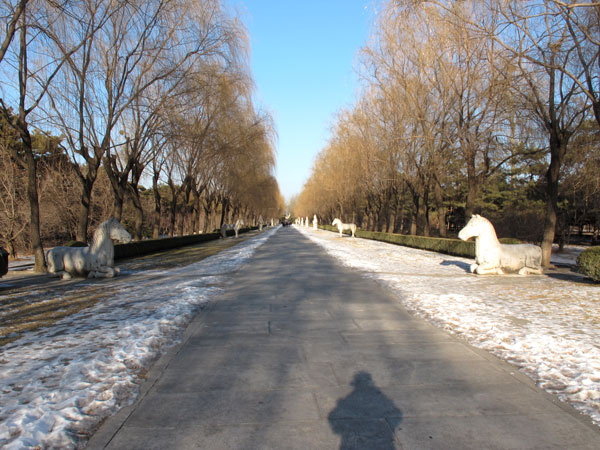 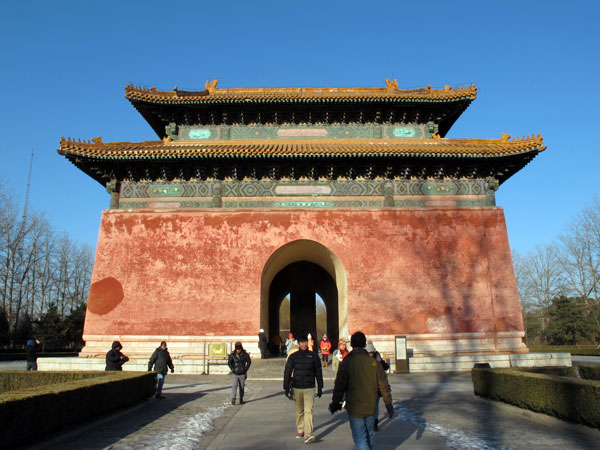 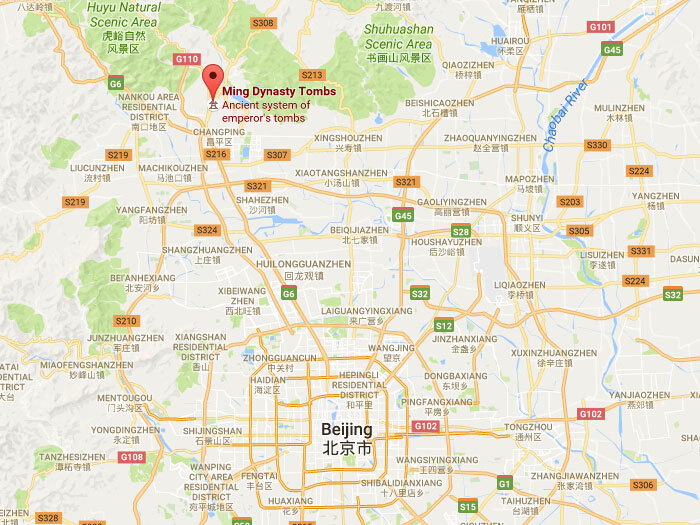 World Cultural Heritage; the largest and most well-preserved royal tomb buildings in China

Located at the foot of Tianshou Mountain in Changping District, Beijing, the 13 Ming Tombs are the cemeteries of the 13 Ming emperors, 23 empresses, and many imperial concubines, crown princes and princesses after the Ming Dynasty moved its capital city to Beijing. Ming Tombs covers 40 square kilometers in the Changping District. The unique ensemble of cultural landscapes is evidence to a cultural and architectural tradition that surpassed the Ming Dynasty and had an everlasting impact in Chinese history. It boasts high historic and cultural values due to its grand architecture, complete system and long history.

The thirteen emperor's mausoleums are similar in their architectural style and overall arrangement, only differing in size and complexity. Ming Tombs, as a unified whole, and each represents a separate mausoleum units. Each tomb was built in a Piedmont. Each has a forecourt where memorial ceremonies and sacrifices were held and a tomb mound at the back. Every tomb is as little as half a kilometer between each other, up to eight kilometers. Under the guidance of the theory of traditional Chinese Feng Shui, from site selection to planning and design, the design of the Ming Tombs was much focused on the harmony of mausoleums and water, plants and the nature. The Ming Tombs, as an outstanding representative of ancient Chinese Mausoleum, shows the rich connotation of Chinese traditional culture. On July 2003, it was inscribed on the UNESCO's World Heritage List. They were listed along with other tombs under the "Imperial Tombs of the Ming and Qing Dynasties" designation.

Currently, only the Sacred Way, Changling Tomb), Dingling Tomb and Zhaoling Tomb are accessible to the public, and the rest parts of the 13 Ming Tombs are not available to visit.

【Changling Tomb】
Among these tombs, the largest one is Changling Tomb, which was built in 1413 and is the burial place of Zhu Di, the third Ming emperor and the chief of Ming Tombs. It is not only the largest one, but the best-preserved one among the thirteen tombs.

Changling is the mausoleum of the third emperor, Yongle Emperor Zhu Di, in Ming Dynasty. It is the first tomb, as well as the main mausoleum in Ming Tombs in Beijing. Except for the Yongle Emperor Zhu Di, the Empress Xu was buried here too. Changling Tomb began to be built in 1409, and was completed in 1413. It is the largest, oldest and also best-preserved tomb in the Ming Tombs. So Changling Tomb is one of main tourist attractions within Ming Tombs. The palace buildings in Changling tomb cover an area of about 120,000 square meters, with rectangular front and cylindrical behind. The rectangular front is consisted of three courtyards. The emperor built the tomb by himself.


【Dingling Tomb】
At the Dingling Tomb, the burial place of the 13th Ming emperor, an underground palace was excavated. It is in the southwest of Changling Tomb in Ming Tombs. It is the tomb of the thirteenth emperor Zhu Yijun (Reign Wanli) in Ming dynasty. Except for the king, two queens are also buried too. The mausoleum was built in 1584 ~ 1590. The main buildings in Changling Tomb are Ling En Gate, Ling En Hall, Treasure Town, Ming Building and underground palaces. An area of 182,000 square meters.

It is the only one of the Ming Dynasty Tombs to have been excavated. Visitors are allowed to see the underground palace and the two exhibition rooms above the ground to view the fabulous cultural relics buried with the dead. The excavation revealed an intact tomb, with thousands of items of silk, textiles, wood, and porcelain, and the skeletons of the Wanli Emperor and his two empresses.

【Zhaoling Tomb】
Zhaoling Tomb is the tomb of the twelfth emperor and his three queens in Ming dynasty. It is the first repaired tomb in large scale in Ming Tombs, as well as one of the tombs officially opened to tourists. Zhaoling Tomb covers a construction area of 35,000 square meters. The existing buildings include Ling En Gate, Ling En Hall and two side halls, Hefang City, Ming Building, etc.

【Sacred Path】
The Sacred Path, the passage leading to the tomb, is lined with more than 30 lifelike stone figures and horses, all sculptures based on a single huge rock. It is the first attraction of Ming Tombs. Each emperor's tomb was constructed at the foot of a separate small hill but they all share a main road called the Sacred Way. This path leads into the complex, lined with statues of guardian animals and officials, with a front gate consisting of a three-arches, painted red, and called the "Great Red Gate".

Alongside the Sacred Way are 18 pairs of marble figures lined up in antithesis, these marble figures, sculptured from whole stones, were erected over 500 years ago, the traditional way of putting over marble figures as guard of honor in front of the mausoleum began in the Han Dynasty which signified the dignity of the emperor, symbolizing the good fortune and warding off evil influence. This Sacred Way starts with two hexagonal columns called Wang Zhu on either side, they are carved with a cloud design. Their tops are shaped like a rounded cylinder. Following this are on each side are lions, Xiezhi, camels, elephants, Qilin, horses. All six animals have two kneeling, two standing, 12 animals on each side and 24 animals in all. They were supposed to change guards at midnight. A slight turn of the Sacred Way leads to the human statues. Even this slight turn is in conformity with the principle of Feng Shui. On each side stand two generals, two civil officials and two “retired” government officials, 6 on each side, and 12 in all. They are larger-than-life-size human statues. The avenue of stone animals and statues ends at Ling Xing Gate, better known as the Dragon and Phoenix Gate.


【Yinshan Pagoda Forest】
Yinshan Pagoda Forest is located in the southwest of Haizi Village, 35 kilometers east of Changping District, Beijing. It is a part of the Badaling – Ming Tombs Protection Zone of Scenic Spots and Historical Sites. It is also referred to as "Iron-Wall Silver Mountain (Yinshan Tiebi)". the rocks of Yanshan Mountain are as black as iron. It is mainly granite in minerals like manganese and iron and become black because of erosion by rain. The Yinshan or Silver Mountain was so name for in snow-covered mountain was as white as silver. With three peaks and black cliffs, the Pagoda Forest is charming especially in winter. Although the three peaks of the mountain are not high at all, the cliffs are as steep as walls. It is one of the eight most beautiful scenic spots in Beijing during the Ming and Qing Dynasties. This scenic spot features by beautiful natural landscapes and a forest of pagodas. The pagoda forest was actually the cemetery of the monks of the temple.

Except for the forest pagodas in this place, an ancient lectern and many tablets are also worth having a look. It is a perfect destination to appreciate the natural scenery and research ancient China Buddhism and architecture.

The area chosen as an auspicious site for the imperial burial grounds was not only beautiful of scenery, but also in an excellent position from a military perspective as the mountains provided a natural defense for the area.

Not only the site of Ming Tombs is chosen by Chinese Feng Shui, but the layout and construction of it is in accordance with Feng Shui principles.

The overall layout of Ming Tombs is like a tree. Each tomb as a branch of the tree and the trunk of this tree is the Scared Path which leads to the different tombs. The Scared Path is the only way to enter the entire Ming Tombs. This path is lined with statues of guardian animals and officials, with a front gate consisting of a three-arches, painted red, and called the "Great Red Gate". There are 18 pairs of statues of guardian animals and officials lined on the both sides of the Scared Path, which represents that the emperor is still the master of the Empire. According to the mausoleum system of ancient Chinese imperial tombs, the construction of the Ming Tombs models the palaces in Forbidden City. The perimeter walls are tall. The palaces within the walls are strictly in accordance with a longitudinal axis of the distribution. At the rear of each tomb, and have built a clear floor. Under the floor is the tomb of the emperor.

In front of the tombs, there is a large marble archway. The marble archway, though built some 450 years ago, is still in excellent condition. It is 29 meters wide, supported by six marble pillars and has five arches. The massive pedestals are decorated with relief carvings of dragons and clouds, and on top of each pedestal squats a stone animal, shaped like a rounded cylinder. They are of a traditional design and were originally beacons to guide the soul of the deceased. The archway was built with massive white marble, and the vivid and exquisite archway carving was rarely seen during the Ming and Qing dynasties.

Many things inside Ming Tombs contains the Chinese Feng Shui Principles. Research deeperly, you will find some more interesting things of the culture of ancient China. The Ming Tombs were listed as a UNESCO World Heritage Site in August 2003. They were listed along with other tombs under the "Imperial Tombs of the Ming and Qing Dynasties" designation.

How to get to Ming Tombs

• Visitors can take Metro Line 5 to Tiantongyuan North Station and then transfer to Changping Bus No.22 to get there.

• Also, visitors can take Special Tourist Bus B72 from Deshengmen Gate to Dingling and Changling directly. The buses depart every 30 minutes from 7:10 to 19:10 every day. Or At Deshengmen West Stop, take the bus No.919 Branch 1 and get off at Changpingdongguan ,then take the bus No.314