The history of Tranditional Chinese Clothing here will introduce the brief history of the development of Chinese costume. China has many ethnic groups with a long history while Han people dominate most periods in history. For thousands of years, generations of clothing designers have devoted themselves to building the Kingdom of Clothes, making the garments that cover the human body into an important component of Chinese culture. The progress of nation can be seen through its changes in clothing styles.

Clothing manufacture in China dates back to prehistoric times, at least 7,000 years ago. Archaeological findings of 18,000 year-old artifacts such as bone sewing needles and stone beads and shells with holes bored in them attest to the existence of ornamentation and of sewing extremely early in Chinese civilization.

The idea of fashion reached a new height during the Spring and Autumn and the Warring States periods, when wars broke out frequently and the various states spared no effort to enhance their strength. The different styles of clothes showed people's positions and the states they came from.

The Qin and Han dynasties (221 B.C. - A.D. 220) witnessed the unification of territory as well as written language. Qin Shihuang, the First Emperor of the Qin Dynasty, established many social systems, including one for uniforms to distinguish people's ranks and social positions. China's complete code of costume and trappings was established in the Han Dynasty (206BC-220AD). The yarn-dyeing, embroidering and metal-processing technologies developed rapidly in the period, spurring changes in costume and adornments.

Chinese clothing experienced a rapid development during the Wei, Jin, and Southern and Northern dynasties (220-589). Before 265, the cultures and esthetic views of the peoples in north and south China merged because of the moves initiated by frequent wars. Many philosophical schools of thought influenced both people's lives and the conceptions of clothing design. 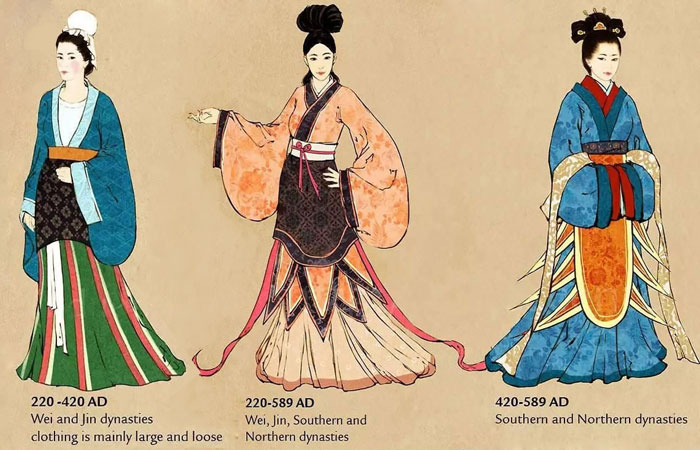 The Tang Dynasty (618-907) wrote the most brilliant page in the history of Chinese clothing. People's clothes were more varied than before because the state was more open to the outside world and people became more cosmopolitan in their thinking. The clothes for women could be called fashionable because they changed rapidly and were showy. Once only a new style came out, many people would be willing to take it. 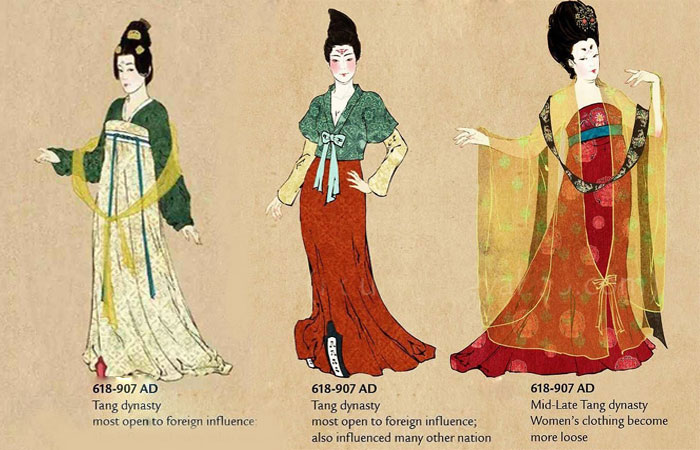 Casual wear appeared during the Song Dynasty (960-1279), and clothes were simple and elegant.During the Yuan Dynasty (1206-1368), the Mongolian ethnic group, known as the People on Horseback, was in power. The style of clothing was mainly a combination of Mongolian and Han. Clothes were luxurious for upper class yet simple and unadorned in design.Dramatic changes took place during the Ming Dynasty (1368-1644). A new conception came into being in clothing design, with no limitation to one style and advocating natural beauty, thus bringing vigor and vitality to the clothing culture. 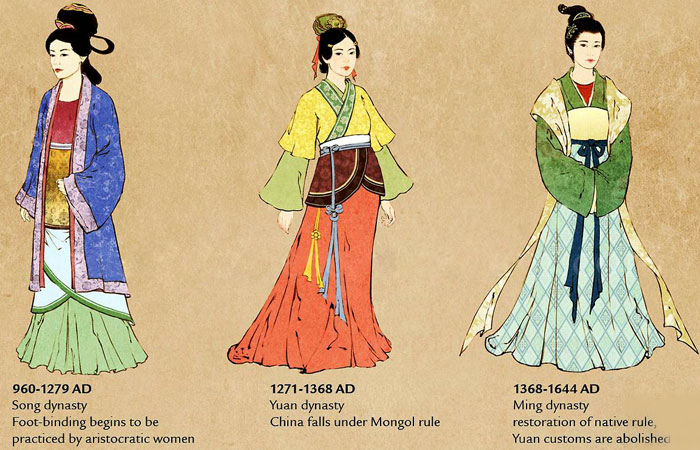 During the Qing Dynasty (1644-1911), clothes became elegant, poised, and glorious. During the 200 years of the Qing Empire, the entire world witnessed dramatic changes such as the Renaissance in Italy and Columbus's discovery of the Americas, but the changes did not affect traditional Chinese clothing because China had a closed-door policy. People still wore clothes showing rank and lifestyle. The retreat from outside cultures has left a precious heritage for traditional Chinese clothes.

Chinese clothing from 1930s till now, Qipao has become into fashion since then. During 1930s to 1940s, dress is further westernized, tailored to flatter body shape. During 1940s to 1960s, Qipao(Cheongsam) survives as everyday wear in Hong Kong until the late 1960s. Today many Chinese brides will choose modern style Qipao or Longfeng Kwa (traditional Chinese dress similar to Qipao) as their traditional suits on wedding ceremony.