Longpao Chinese: 龙袍,pinyin: lóng páo, namely dragon gown, is Chinese imperial dressing with dragon and auspicious patterns embroideries on it. Chinese emperors wore Longpao to go to court every day, it was one type of their official uniforms. Surely they have something similar in other occasions such as attending feast and sacrificial ceremonies in Temple of Heaven or so. Generally speaking, it requires three or four master tailors to work together for around two year to accomplish one piece of Longpao. So far, the Forbidden City in Beijing is the museum that collects the largest amount of Longpao for over 20,000 pieces.

In ancient feudal society, it is easy for people to be distinguished from his daily dresses, especially for the ordinary people and upper-class. For example, the fur of a black fox and the color yellow were reserved for high level officials and members of the imperial family in the Qing dynasty. And how many auspicious animals embroiders ones clothe could have were restrictively regulated and linked to ones rank on the curt and blood tie in the royal family. For the sake of working and low statue, ordinary people usually wear dress making of linen in dark color while upper-class prefer the dress making of silk with many valuable decoration.

Emperors's Dresses in the history

Different dynasties use different colors to make imperial dresses and the Longpao was not always yellow. Though the most emperors’ longpao people see these days are mainly light yellow, the first Longpao in the earlier time was black in fact. Xia Dynasty (2070 BC-1600BC) and Zhou Dynasty (1046 BC-249 BC) preferred black as pictures depict as follow, and the first emperor of Qin, used black color as the official color of his court. 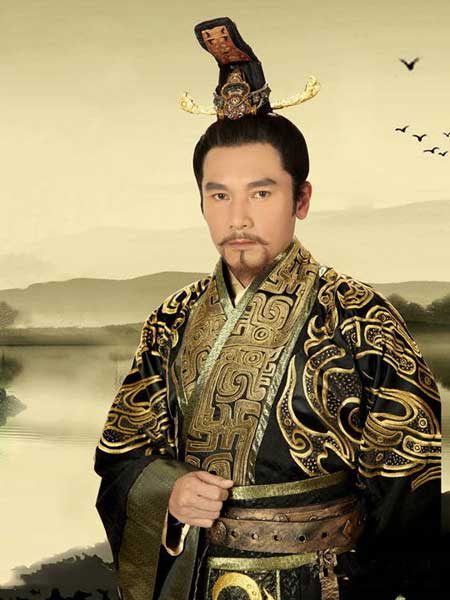 (Actor dressing as the first emperor of Qin in black Longpao) 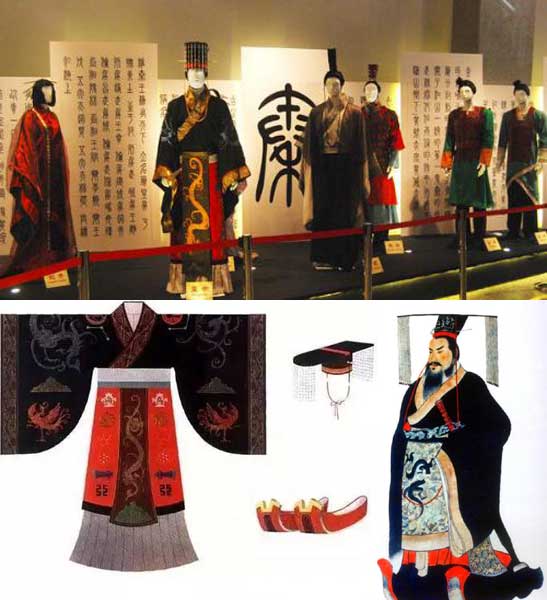 It was Wendi emperor in Han Dynasty who used yellow as a designated color for emperor in the first place.

When it comes to Jin dynasty, they prefers red instead for emperor wardrobe design. 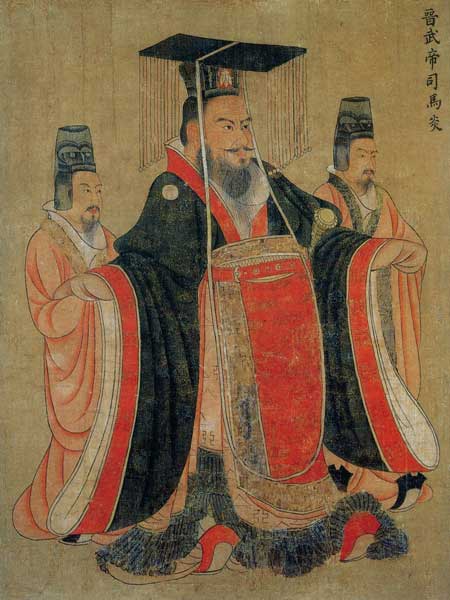 It was not until Sui dynasty, yellow seriously became a favored color by emperor and royal family and ordinary people as well. Wendi emperor of Sui dynasty allows ordinary people wear similar color, but the later emperors in Tang dynasties were not that generous and made the light yellow exclusively within royal family and a symbol of distinguish of power status. The general public was not allowed to wear or even possess such clothes anymore. Anyone found to violate this rule was subject to harsh punishment, even the death penalty. 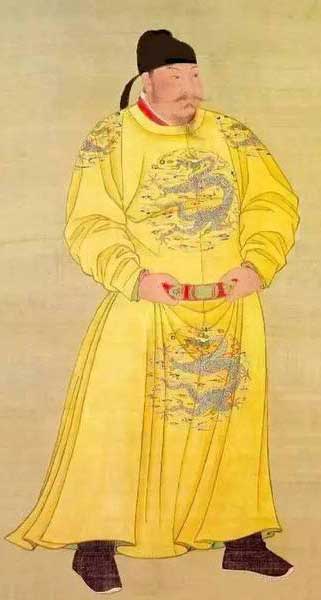 After Tang dynasty, Song Dynasty and Ming Dynasty emperors took red as their Longpao color. And this was because in the theory of the five elements(metal, wood, water, fire and earth), the song dynasty’s auspicious element was fire, hence they chose red as their symbol and for Ming Dynasty, the family name of the royal family was Zhu, which means red in Chinese. 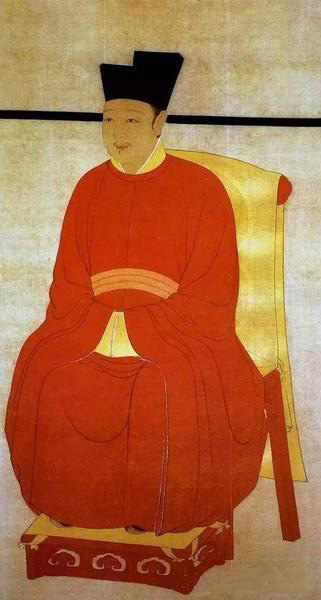 In fact, in Ming dynasty, Longpao were not all red, there were white and yellow which were all official colors on the court. 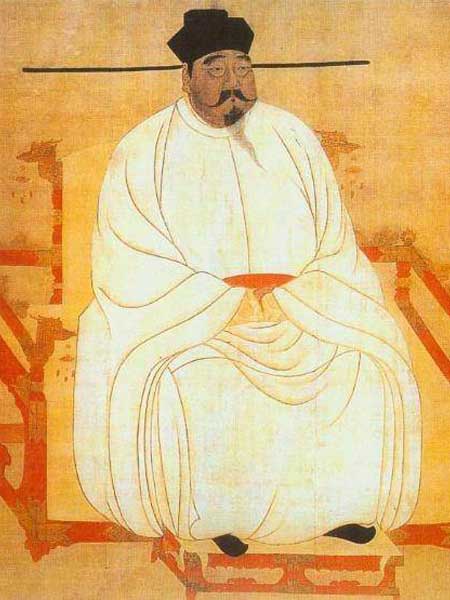 The commonly known Dragon Robes are embroidered with golden dragons were mainly from Qing dynasty, the level and quality of making imperial dressing had reached a peak status. The master tailors not only embroidered the dressing with exquisite dragons and patterns, but also they had combined precious materials such as golden and sliver threads and peacock feathers in the imperial dressing process. Requisite silks, gauzes, satins, brocades and damasks of the highest quality were woven in the imperial weaving factory in Suzhou, and the clothing was sumptuously embroidered and embellished with gold, pearls and precious stones. 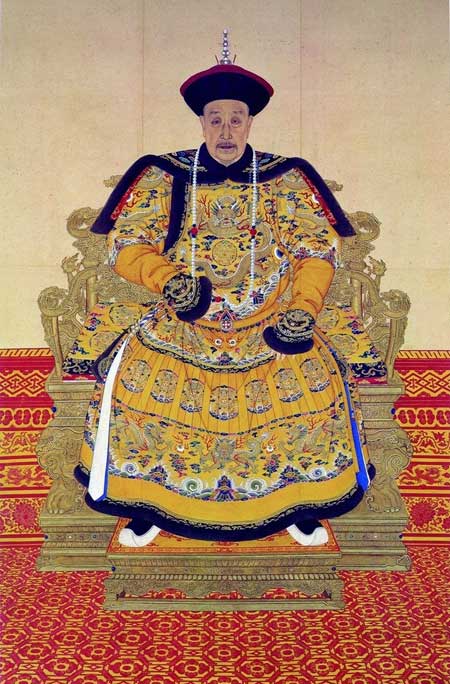 Apart from bright yellow, red, blue and light blue were also reserved colors for the emperor in Qing dynasty. Yellow was reserved for attending feasts and celebrations. Qing emperors' dress adhered to a rigid code that specified clothing for every occasion: ceremonial robes for the most formal ceremonial occasions, court wear for holding audiences, auspicious garments worn during the celebration of festive occasions such as Lunar New Year and his birthday, informal clothing to be worn in his private quarters, and travel ensembles to be worn during the hunt, expeditions and inspection tours. Each ensemble consisted of several garments, headgear, belts, shoes and accessories. The ensembles included seasonal variants. Winter garments, for example, were lined with fur. 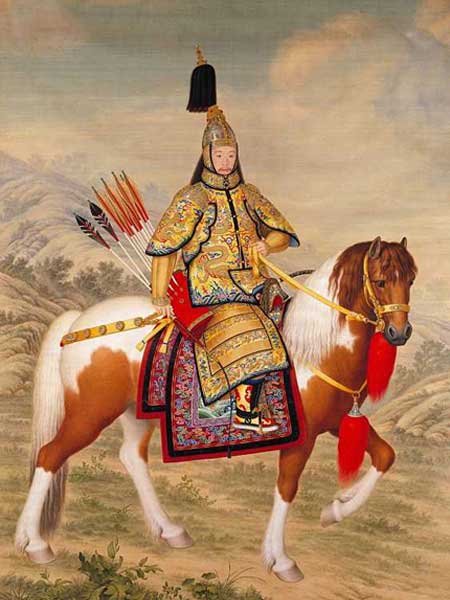 Besides, China is a nation worship dragon. Among the upper dominated class, the Emperor, without any doubt, designated the color yellow and the dragon emblem on traditional Chinese imperial dress as an exclusive affirmation of their power. You will find the most typical example from the dress of Qing's Emperor and his empress.

In Qing dynasties, there happened some cases that empress held the royal court together with emperor. In this case, the empress has to wear a certain kind of court robes to show her status. Winter court hats of empress dowagers and empresses were made of fumed marten and sewn with red wefts. Their hats adorned with pearl, gold pheasant patterns, gems and jade ornaments had protective collar behind the neck with drooping bright yellow ribbons. The winter court robes of empress dowagers, queens and high-ranked imperial concubines were bright yellow, and also decorated with images of dragon patterns. Summer court hats were made of cyan velvet. 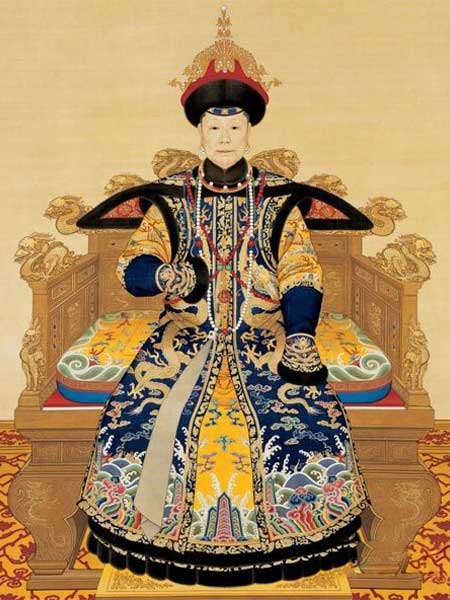 Empress dowagers, queens and high-ranked imperial concubines used cyan sheets with gold-wrapped metal trims to decorate their court costumes; images of dragons and Chinese characters Fu (blessing) and Shou (longevity) were embroidered on the clothes. Necklines of dresses of empress dowagers and queens were made of golden filament and decorated with pearls, turquoises and jade ornaments. Three sets of necklaces were hung on the chest when empress dowagers and queens wore court robes. When an empress dowager or queen was in auspicious clothing, she always wore one set of necklace made of pearls, jade and other top-grade materials. Court necklaces of imperial concubines were decorated with ambers, each having 108 beads in four parts divided by three big ones. 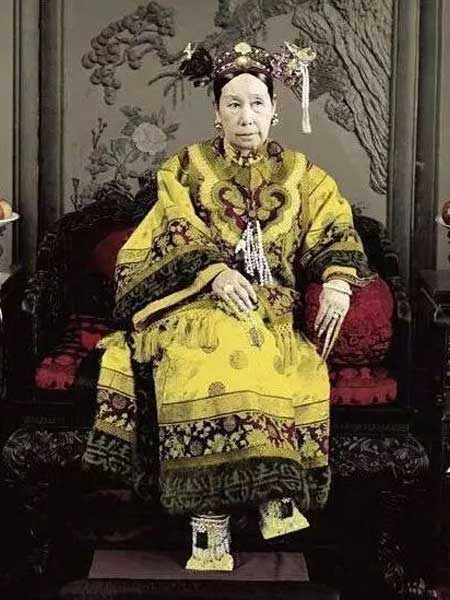