Tang Dynasty may be the most powerful and prosperous in Chinese history. In the first 100 years of Tang Dynasty, its prosperity helped it to achieve an unparalleled height on the trade as well as connection with the outside world.  Due to the fast growth of Tang Dynasty, a golden era within the record of the Silk Road began.

The land silk road reached its peak in the early Tang Dynasty and formed its "golden age". Two cities played an important role in that time. They are Chang'an and Dunhuang. 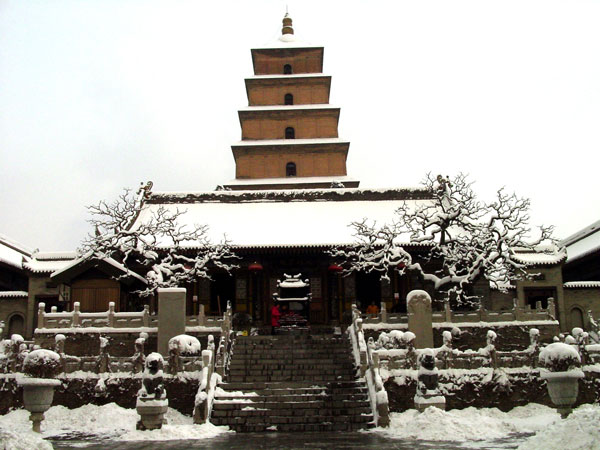 Chang'an (now Xian), an impressive, great capital of the Tang Dynasty, seemed to be the most important metropolis across the world in those days and also the centre of Orient civilization. It attracted thousands of traders, travelers, historians as well as devotees of various religions coming from all over the world.

During Tang Dynasty, Chang'an got 12 city Gates. The Kaiyuan Gate in the western city seemed to function as the starting place of the Silk Road. People coming from the Western Regions got into Chang'an via this gate. During that time, Tang Kingdom got close relationships with over 70 countries.

Overseas business men introduced goods towards the marketplaces of Chang'an from southern and western Asia and also Europe; like horses, medicines, spices, haircloths, coats, glassware, diamonds, corals, hawksbill, rhinoceros horns, tortoise shells, jewels, pearls, ivories; all of these had been every day products exchanged in the markets. They in turn purchased Chinese products, like bullion products, bronze ware, porcelains, teas and papers and also took along with them on their journey home.

Dunhuang, located in the western area of the Hexi Rorridor, Gansu Province, was obviously a strategically significant city and also a centre associated with global business. It had been an interjunctlon towards the northern and southern area of the Silk Road.

Dunhuang, since the gate to the Western Regions, seemed to be the very first to get the Indian influence and grew to become certainly one of China's original Buddhism centers. Dunhuang had a lot of Buddhist temples. In Tang Dynasty, there were a minimum of 16 fantastic Budhist temples in Dunhuang having a total greater than 900 monks.

The prosperity of the silk road in Tang Dynasty promoted the exchanges of art and culture. Ten musical compositions were frequently performed in Tang royal palace, half of which came from Gaochang, Shale, Kizil, and other countries in the Western Regions.