English
Feedbacks & Reviews | About us | Contact us
Home > Destinations > Guiyang

Guiyang, the capital of Guizhou Province, is located at the east of the Yunnan- Guizhou Plateau in the southwest of China. The city features low latitude, high elevation and diversified landforms. In the subtropical zone, Guiyang enjoys a warm and moist climate, which endowed the city with abundant biological resources. Guiyang is the home to some of China's most spectacular vistas, with verdant mountains, limestone peaks, the Huangguoshu Waterfalls. Guiyang embraces a large number of Places of scenic and historic interest, including Hongfu Buddhist Monastery, Jiaxiu Pavilion and Qingyan Ancient Town.

On the eighth day of the fourth lunar month every year, it is the traditional festival "Si Yue Ba" of the Miao nationality. On that day, the young Miao peoples living in Guiyang and nearby converge at the city center for a celebration. Dressed in their holiday costumes, they dance and sing all night long.

• Chinese Name: 贵阳
• Location: Located at the east of the Yunnan- Guizhou Plateau in the southwest of China
• Dialing code: (+86) 0851
• Zip Code: 550000
• Area: An area of 8,034 square kilometers, with the highest elevation of 1.762 meters and the lowest, 506 meters.
• Main attractions in Guiyang: Jiaxiu Pavilion, Qianling Mountain Park, Qingyan Ancient Town 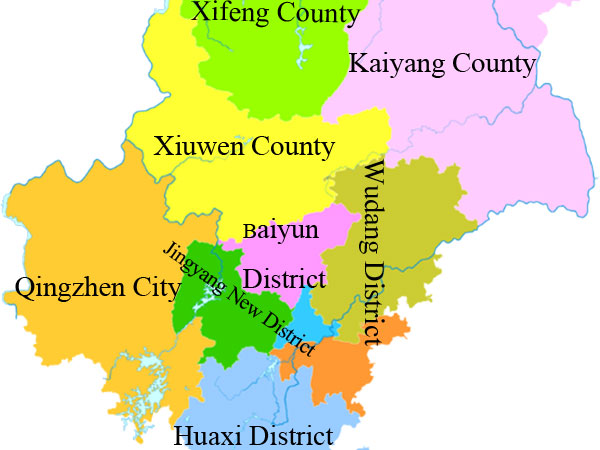 Administrative Division: There are six districts of Guanshanhu, Yunyan, Nanming, Huaxi, Wudang, Baiyu, one county-level city of Qingzhen and three counties of Xiuwen, Xifeng and Kaiyang.

Population: Guiyang boasts a population of 3.4 millions (2010). Guiyang is a multi-nationalities city. Apart from the Han, there are 36 minority ethnic groups, including the Miao, Buyi, Dong, Yi, Shui, Hui, Gelao, Zhuang, Yao, Manchu, Bai, Mongolian, Qiang and Tujia. Nationalities like Buyi and Miao account for 77.65% of the total minority populations. The most populous minority ethnic group was the Miao, and less populous are the Buyi, the Dong, and the Tujia.

Guiyang City is located in the middle of Guizhou hill-plateau, on the watershed between Yangtse River and Pearl River, higher in the southwest and lower in the northeast. Miaoling Mountain extends in the boundaries, hills undulate and the hills of denudation alternate with basins, valleys and depressions. The relative difference in elevation is about 100-200 m. The highest peak, 1659 m above sea level, is in Miaowoding, Shuitian Town and the lowest place, 880 m above sea level, is in the exit mouth of Nanming River. In the middle of Guiyang, the stratified landform is obvious, mainly including Guiyang, Zhongcaosi synclinal basin and Baiyun, Huaxi, Qingyan multistage tableland as well as corroded depression. Peak cluster and dish-structure depression, funnel, underground stream, karst cave are developed.

Guiyang has a four-season, humid subtropical climate (Koppen Cwa), tempered by its low latitude and high elevation. It has fairly mild winters, warm summers and a monsoon season, where the majority of the year's 1,118 mm (44.0 in) of precipitation falls. The mean temperature in January is 5.8 °C (42.4 °F) and for July 24.5 °C (76.1 °F). Rain falls throughout the year, with occasional flurries in winter. At only 1150 hours of sunshine, it is also one of China's least sunny cities. Relative humidity is consistent throughout the year.

♦ Spring (March to May): Guiyang in spring is overflowing with vigor that all flowers bloom together.
♦ Summer (June to August): The hottest month of July in Guiyang, the average temperature is 24 degree. Guiyang is the best choice for avoid summer heat, and at that time Huaxi Park has spread lotus that it’s leaf reaching the sky. And Qianling Park is a good place to rowing boat.
♦ Autumn (September to November): Climbing to Qianling Mountain in autumn or seeing rippling wheat and billowing reed field is very suitable.
♦ Winter (December to next February): Guiyang has suitable climate that it does not has the intense heat of summer and severe cold in winter. It is not dry and there is not windy and dusty all year around. The coldest month is in January, the average temperature is 4.6 degree. Going to Guiyang where is still emerald green in winter, climbing to Jiaxiu Pavillion, you can experience different taste of winter.

♦ Spring (March to May): Guiyang temperature in day and night is lower, if people meet with rains, it will be cool in Guiyang. Temperature in Guiyang scenic spots are lower, bringing a windproof light coat is necessary. Guiyang is easily to rain, especially in spring and summer. Travel to Guiyang, people must prepare a pair of suitable shoes that is not easily get water seepage,
♦ Summer (June -August): Guiyang has pleasant climate even in the hottest summer, it won’t be over 30 degree. Guiyang is located in the Yunnan-Guizhou Plateau; the ultraviolet ray is strong so sun cream is also necessary.
♦ Autumn (September to November): Coming to autumn, the average temperature is 10 to 15 degree. Whenever people travel to Guiyang, don’t forget to bring raincoat and coat. Because Guiyang is easily get rains, and after raining the temperature will decline so a windproof coat is very useful.
♦ Winter (December to February): The temperature of Guiyang in whole year is from 10 to 15 degree, and it won’t be lower that zero degree in winter. If tourists travel Guiyang in winter, when it is clammy, do not forget to bring enough clothes for keeping warm. Recommend to bring light down jacket with sweater or fleece.

Guiyang is the supporting point of the "golden triangle" tourist area in Guizhou. As a typical karst development region, Guiyang has characteristics of “grotesque mountain, clear water, beautiful stone, strange cave” natural karst landscape and cultural tourism resources. Guiyang has natural scenery with mountains, water, forest, caves for the characteristics of the plateau, cultural landscape that cultural connotation is extremely rich, and ethnic customs of primitive simplicity that is rich and colorful. Seven organizations such as the United Nations, the Asia-Pacific organization rewarded Guiyang as the top summer resort of China with the reason of "Guiyang has the advantage of comfortable average temperature in summer especially in the hottest month".

♦ Qianling Mountain Park–Qianling Mountain Park is only 1.5 kilometers from Guiyang center, the transportation is convenient. In the park people can climb mountain, enjoy boat trip on the lake, vist stalactite cave, can also pray in the temple or go to the zoo, etc. Apart from a few tourists who like to be close to nature, breathe the fresh air and see the monkey, mainly of Guiyang locals go to there, especially the old people will go to the park early in the morning for morning exercise. Got to the top of the mountain there is a Hongfu temple which was built in the Qing dynasty.

Guiyang Longdongbao International Airport is located in the east suburb of Guiyang, 11 km to downtown. At the end of 2007, Guiyang Longdongbao International Airport upgraded from level 4D to level 4E. From January to October, 2013, Guiyang Airport has 111 routes, navigable city of 67, including China southern, Air China, China Eastern airlines, Hainan airlines and so on, a total of 27 airlines operating at Guiyang airport.

If take a taxi from the city to the airport, or from the airport to the city, the driver charge fees are generally 50 yuan (including highway fees), and can’t bargain. In addition, passengers can also take bus at the train station, Youzha street, Riverside Park to the airport road, then walk to the airport.

Guiyang is the railway hub of southwest China, Guiyang South Railway Station is the second largest railway marshalling yard, Sichuan-Guizhou, Guiyang-Kunming, Hunan-Guizhou, Guizhou-Guangxi four railways meet here. Guiyang North Station is one of the very large railway hub stations in China, and it was put into use on December 26, 2014.

Guiyang South Railway Station
♦ Address: 136 South Railway Road, Guiyang, Guizhou
♦ How to get there: people can take bus No.23, 26 and 315 to South Station Stop

Guiyang South Railway Station is located in the Ergezhai, Nanming district, Guiyang, founded in 1959, 897 km from Zhuzhou station, 8 km away from Guiyang station; directly under the jurisdiction of Chengdu Railway Bureau, present it is special station. Guiyang South Railway Station is one of the very large railway hub stations in China, largest freight station in southwest region, one of the most important marshalling yards in Asia.

321 and 210 national road pass Guiyang and has formed on 4 national roads of Hunan-Guizhou, Guizhou-Guangxi, Yunnan-Guizhou, Sichuan-Guizhou that centered on Guiyang, and there are 4 expressways of Guiyang-Huangguoshu, Guiyang-Zunyi, Guiyang-Bijie, Guiyang-Xinzhai connects cities in Guizhou to other cities outside Guizhou. If you want to go to different cities in Guizhou, then you can take bus in Guiyang, basically there are direct buses in Guiyang.

The buses in this station mainly going to Zunyi, Zhijin, Zheng’an, Anshun, Huangguoshu, Yanhe, Xingyi, Xiangshui, Tongren, Kunming, Chongqing and Changsha. The service time is from 7:30 to 21:00.

The buses in this station mainly going to Zunyi, Anshun, Duyun, Kaili, Zhenyuan, Libo, Congjiang and Nanning, Wuhan outside the Guizhou province. And the bus departs at interval of 10 to 50 minutes.

There are long-distance taxi to Zunyi and Anshun. The buses in this station mainly going to Zunyi, Anshun, Duyun, and Kaili, and the buses here are generally going high-grade highway. The service time starts at 7:00; every half an hour departs a bus.