The Highest Cities in China

Following will be an introduction of The Highest Cities in China. These cities mostly lies in the south west and west part of china where near or at the Qinghai-Tibet Plateau. Each city has its own characteristic. They are in different location, have different history background, different folk custom, different traditional culture. Come with TopChinaTravel and start your own exploration in these high altitude cities.

Shigatse, lying at the northern foot of the Himalayas in the south of Tibet, is the highest city in China with an average altitude of 3836m in the urban district. Located at the confluence of Nianchuhe and Brahmaputra rivers in the fertile plain, Shigatse is also the second largest city in Tibet covering a region of 3,875 square kilometers and with a population of 920,000.
It is an ancient city with a history for almost 600 years in the plateau. The name of the city is Xikasangzhuzi in Tibetan, which means ‘the manor which has the most fertile soil’, and it is transliterated into Chinese as ‘Shigatse’. Shigatse is most famous as the seat of the Panchen Lama, who has been regarded by Tibetans (except those in Lhasa) to be on equal footing with the Dalai Lama.
Shigatse is a small city as well as a big village. It is reputed as the ‘granary’ of Tibet. It is really an very colorful region with thriving semitropical jungles, broad grasslands, fertile fields in river valleys and snowfields at the high altitudes.
Famous attractions: Tashilhunpo Monastery, Pelkhor Monastery, Sakya Monastery, Mount Everest, Rongbuk Monastery, Mount Everest Base Camp

Lhasa, whose name means 'the Land of Gods' in Tibetan, is the capital of Tibet Autonomous Region. Located at the bottom of a small basin surrounded by the Himalaya Mountains, Lhasa has an elevation of about 3,600 m and lies in the centre of the Tibetan Plateau with the surrounding mountains rising to 5,500 m (18,000 ft). Due to its sufficient sunshine annually, it is also famed as 'the Sunshine City'. It is the center of Tibet's political, economic, cultural and religious activities.
Lahasa is an ancient city with its time-honored 1,300 years' history. It was called 'Luosha' or 'Luoxie' which mean 'dirt-delivering-by-sheep' in the ancient times. There is a story for the name. It is said that Lhasa once was an area of low-lying marsh. In order to fill in the earth, Princess Wencheng from Tang Court used sheep to deliver dirt after her arrived at the place. Lahasa became the city's name in 9 century. As the political, economic, cultural and religious developments of Turpan Region, Potala Palace, Jakhang Monastery and so on were built one by one, which formed Lhasa's old downtown.
All pervaded sacred religious atmosphere mixed with leisure, happiness and the smell of sunshine, Lahasa has been the destination of travel the beginning of lives for many people.
Famous attraction: Potala Palace, Jokhang Temple, Barkhor Street, Sera Monastery, Drepung Monastery, Norbulingka,Tibet Museum

Shangri-La is located in the north west of Yunnan Province, used to be named Zhongdian. It was named officially Shangri-La in 2001. Shangri-La is a name that has worked its way into the English language. Synonymous with utopia, the word was first used in 1933, coined by the English author James Hilton in his novel Lost Horizon. Shangri-La was a fictitious paradise, characterized by towering snow-capped mountains, lush forests, vast gorges and idyllic lakes. The beautiful scenery described by Hilton made the name stick in popular memory and arouses a certain curiosity and mystery whenever it is heard.
With the endless kilometers of backcountry just waiting to be discovered, this region offers unique hiking and horse trekking chances to those who get the chance to make the journey down to northern Yunnan. At an altitude of 3,280 m, Shangri-La is the start of the doorstep of Tibet. But today, the town looks one of the China's next adventure hotspots.
A one-day trip to Shangri-La isn't nearly enough, however it can help make one feel like the turmoil and stress of city life has never been farther away.
Famous attraction: Songzanlin Monastery, Dukezong Ancient Town, Meili Snow Mountain, Potatso National Park, White Water Terrace

Lijiang includes the heritage site of Lijiang Ancient Town as well as picturesque nearby surroundings. In 1998, Lijiang Ancient Town was inscribed into the World Heritage List by the World Heritage Commission of the UNESCO. The Commission called it 'an exceptional ancient town set in a dramatic landscape which represents the harmonious fusion of different cultural traditions to produce an urban landscape of outstanding quality.
Lijiangis the ideal destination for nature lovers and anyone interested in ancient people groups and their customs. Lijiang is located within the northwest part of Yunnan Province, in the southeastern part of Qinhai-Tibet Plateau and the northwestern part of Yunnan-Guizhou Plateau. Its altitude is 2418m in average.
Famous attraction: Lijiang Old Town, Tiger Leaping Gorge, Jade Dragon Snow Mountain, Lugu Lake, Shuhe Ancient Town

As the capital city of Qinghai Provnce, Xining is the provincial center of politics, economy, culture, education, technology, transportation and commerce.
It lies in the eastern part of Qinghai-Tibet plateau, and the upper reaches of Shuang Shui River. As well as being an important hinge between the Central Plains and the western part of China in ancient times, Xining was an important link in the Silk Road. It continues to be an important rail and road link to the hinterlands of the Qinghai-Tibet Plateau. This is a long and narrow river valley belt from southwest to northeast, so called it "Xining big Nanchuan".
Xining is an ancient highland city with an average altitude about 2295m on the Yellow River which offers many scenic spots and historical sites. Although the city itself has a strong Islamic flavor, as it is home to many Hui people, you will start getting a more Tibetan feel as you move away from the city.
Famous attraction: Dongguan Mosque, Qinghai Lake, Taer Monastery, Bird Island, Sun & Moon Mountain

The name of Dali is originated from that of a local regime in history called Kingdom Dali, meaning a state of great order. Many of the architectures of the city were built of marble from the ore nearby, and that is why it is also called a city of Dali Stone (marble). Marble buildings, marble streets, marble wall foundations and marble wells make the city so bright and limpid as if it is a tranquil fairyland.
Each family loves door carving and wall-decoration; every household has a flower garden. While it is freezing season in the north, hundreds of flowers are in blossom here. Among them, camellia, azaleas and orchids are the most fascinating and enchanting ones.
The average temperature in Dali is 15.1 degrees Celsius. The coldest temperature is 8.7 degrees Celsius in February, and the hottest is 20.1 degrees Celsius in July. It is called the "Sweden of the East," and has 126 days during which the temperature is 18.7-20.6 degrees Celsius, the best climate for convalescence in the world. Moreover, 229 days are frost-free, providing a suitable environment for the growth of various kinds of plants. Flowers blossom all the year round.
Dali Ancient City
Famous attraction: Erhai Lake, Three Pagodas, Xizhou Bai Houses, Mt. Cangshan 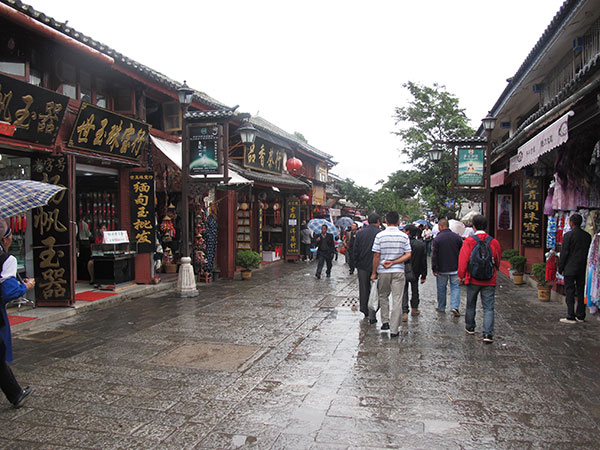 Kunming, the capital of Yunnan Province, is the political, economic and cultural center and also the transport and communication hub of the province. Kunming has no bitter cold in winter and heat in summer with blossoms opening all the year round. Hence it has enjoyed the reputation of the 'Spring City'.
With a history more than 2,400 years, it owns its importance to the fact that is was the gateway to the well-known South Silk Road that facilitated trade with Tibet, Sichuan, Myanmar and India.
Kunming's alluring high land scenery, bewitching karsts landform, varied and exotic habitats and customs, places of historical interest can be found are major scenic spots in and around the city, such as Dianchi Lake, Stone Forest, Villages of Ethnic Culture, and Grand View Garden. Besides, the city is the place one can fully experiences Yunnan's minority culture with 26 ethnic minorities like Yi, Bai, Miao, Dai and Naxi in the region, each of them has their own featured festivals.
Famous attraction: Stone Forest, Western Hill and Dragon Gate, Village of Ethnic Culture

Lanzhou, the capital of Gansu province, is the center of transportation and telecommunication in the northwest of China. With the Yellow river running through its downtown area from west to east, rounded by mountains on the south and north, Lanzhou formed a unique and beautiful townscape.
Land used to be a key point on the ancient Silk Road., Human beings lived and developed here as early as 5000 years ago. Western Han Dynasty establishes a county government here and named Jincheng which means” the golden city”. It was finally named Lanzhou at the early of Sui dynasty. Since Tang and Song dynasty, along with the development of Silk Road, Lanzhou gradually grew up to be an vital transportation hub and a commercial city. More than just a trade route, the Silk Road one played a great role in promoting friendly relations and economic and cultural exchanges between China and Asia, European and African countries. The ancient Silk Road also left many places of interest and colorful cultures, attracting a large number of foreign tourists come for sightseeing.
Famous attraction: Bingling Thousand-Buddha Caves, White Pagoda Mountain Park

Dunhuang is located at the western end of Hexi Corridor in Gansu Province in northwest of China. It is 2000 kilometers west of Beijing, right on the silk road that caravans would take to get from China to the Middle East. It is a small oasis surrounded by high mountain, deserts and the Gobi Desert with Dang River as the city's water supply. Known as Shazhou in ancient times, it was served as a rest stop for traders as the gateway through which Buddhism, Islam and Christianity entered China.

Dunhuang means magnificent. In Dunhuang, there are a lot of historical relics. Such as Mogao Caves, (it is called thousands of Buddha caves), it has 1500 years' history. It is in the important place in Chinese history. Dunhuang is like an arts palace and cultural house. There are Chinese ancient buildings, paintings and carvings. The ancient place of Yumenguan was the important pass of the northern part of the Silk Road.
Famous attraction: Mogao Grottoes, Crescent Spring and Singing Sand Dune, Yangguan Pass, West Thousand-Buddha Cave

Yinchuan is the capital of Ningxia Hui Autonomous Region. It is located in the middle of Ningxia and Yinchuan plain. The landform of it can be divided into two parts: the mountainnous area in the west and south, the plains in the north and east. Its average altitude is 1,100 m.
As a multi-nationality city, Han, hui, Manchu, Monglian and Chaoxian peoples lives here harmoniously. Among them, Hui people account for 26.3% of the total population.
Yinchuan is also an acient city with a history of more than 1,300 years. Central Chinese culture, frontier culture, Hetao culture, the Silk Road culture, the Western Xia culture, Islamic culture and other various cultures are blending and accumulate in this land. The strong flavor of Hui culture, Vigorous desert landscape, beautiful frontier scenic, the ancient civilization of the Yellow River and the mystery of the Western Xia culture together formed the image of the city “Gland Helan, Colorful Yinchuan”.

Since most of Chinese people inhabit in east of China, the above high-altitude cities is with small population, and scenery is splendid with broad vision. Besides, all of the highest cities in China are in undeveloped area, therefore, transportation is not convenient there, and English penetration is low, so it’s not easy to find a people who can communicate with in English. 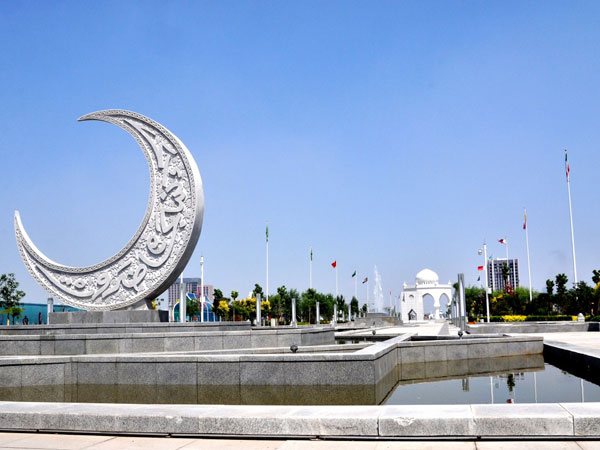 Since most of Chinese people inhabit in east of China, the above high-altitude cities is with small population, and scenery is splendid with broad vision. Besides, all of the highest cities in China are in undeveloped area, therefore, transportation is not convenient there, and English penetration is low, so it’s not easy to find a people who can communicate with English.