The Dragon Boat Festival is celebrated  on the 5th day of the 5th month of the traditional Chinese lunar calendar. The time is also a source of the festival's alternative name, the Double Fifth Festival. 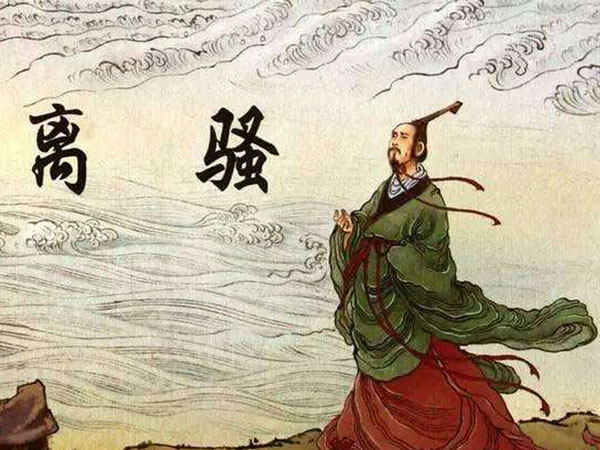 Qu yuan
Though the original of this festival various among scholars,the most accepted one is the one with in memorial of the great poem and minister Qu Yuan of Chu State. Qu Yuan was an upright ,loyalty and highly respected minister of Chu State during the Warring States Period  Of the Zhou Dynasty(475 B.C.- 221 B.C.). He was always producing wise counsel to the monarch to keep the Chu state maintain peace and prosperous.Most of all, he insisted to keep their independence and instead of knee down to the abciousin Qin power. However, his uprightness was not favored by the monarch and most of those corrupted consolers in Chu state at the time.In the end, he was vilified by the other consolers and exiled by the monarch at the accusion of treason.During his exile he wrote numerous great poems about patriotic.Twenty-eight years later,Qin invaded and took over Chu, seen his country being set into chaos,his heart filled with disappointment,and in despair, Qu Yuan committed suicide by drowning himself in the Miluo River.After his death , people racing boat on the river trying find his body yet all ended up with nothing, so they throw sticky rice into Miluo river to stop the fish eating his body. And thus the story of boat racing and eating Zongzi on this festival today.
Special Food for Dragon Boat Festival

Zongzi is the most representative food of the Dragon Boat Festival. It’s a kind of dumpling made of glutinous rice with leaves outside, meat, bean, nut and some ingredient inside. Different place has different flavor and different ingredient. Generally, Zongzi in south China is salty ones with meat or egg, Zongzi in east China is sweet ones with beans while in north it could be the ones with red dates in it. 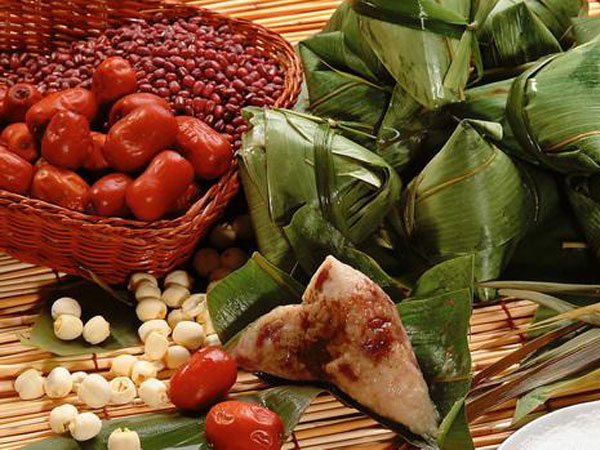 Zongzi
Customs of Dragon Boat Festival
In order to prevent the fish biting Qu’s body, the Chu people mourned for this elegant patriot by throwing the Zongzi into the river, and the custom of making and eating Zongzi has been preserved until now. In addition, people's rescue attempts gradually evolved into the Dragon Boat Race.
• Dragon Boat Racing
In order to drive the fish away to avoid Qu’s body being bitten, racing boat on the double-fifth day gradually became a classic activity of this festival. Rowers sit on the head of the dragon boat take charge of beating the drum and enhancing other rowers’ morale, other rowers need to make concerted efforts to row.Some places in Guangdong take it more seriously as they do a special ritual to pray for the dragon god’s blessing for this years future before they start racing. 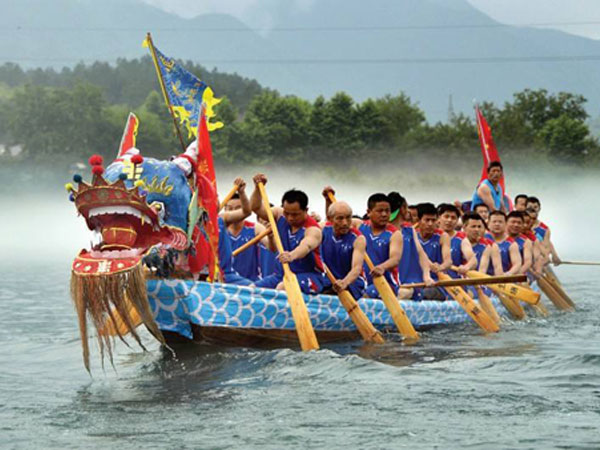 dragon-boat racing
• Hang calamus and artemisia above door
With the weather turning warmer, people are more likely to be infested with disease, so it is somewhat practical to hang calamus and artemisia on the door during the Dragon Boat Festival as their special smell can keep those insects away.In doing this,people also believe that it can somewhat drive bad energy away. 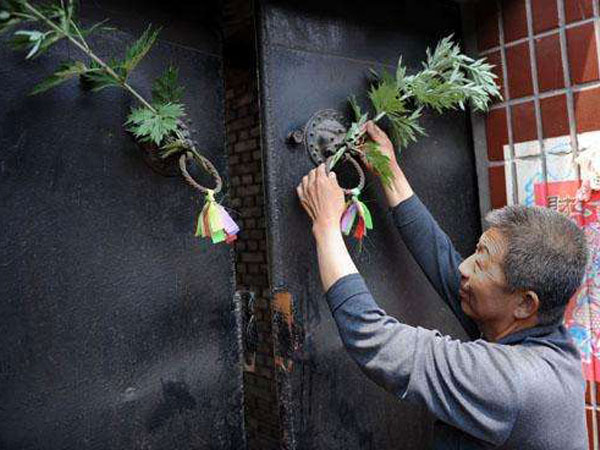 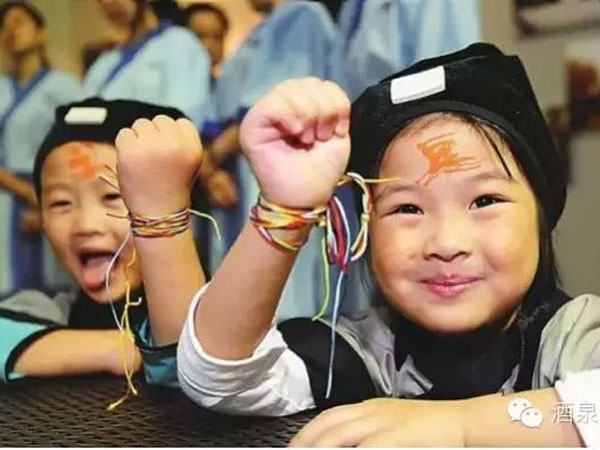 Wear five-colored chain bracelet
All of these activities, together with the drinking of realgar wine, were regarded by the ancients as effective in preventing disease or evil, while promoting health and well-being.