The coming of Buddhism to China from Indian was a great event in the development of Chinese culture and of Buddhism itself. After a long period of assimilation, it established itself as a major system of thought as well as a religious practice, contributing greatly to the enrichment of Chinese philosophy and exercising and enduring influence on the Chinese popular religion and on the mind and character of the Chinese people. Indeed, it becomes one of the Three Pillars of the traditional culture of China.

Buddhism was firstly introduced into the region inhabited by the Han people around the 1st century. It is said that in the year 2BC, Yi Cun, an emissary of Dayuezhi Kingdom (an ancient mid-Asian country established by a strong Chinese minority originally living in northern China and later moved to the west), went to Chang'an (today's Xi'an City) to impact Buddhist sutras to a Chineses Doctor Jing Lu. And this is the first record about the introduction of Buddhism into China.

The feature of Chinese Buddhism lies in the coexistence of Mahayana Buddhism and Hinayana Buddhism as well as the concomitance of Exoteric and Esoteric Buddhism. Buddhism was initiated in India, developed in China and further expanded to Japan and Korea. However, Buddhist doctrinal classification itself never played any crucial role in Indian Buddhism as it did in China. Indian Buddhists were threatened by the values and socio-political structures of the Indian society dominated by Hinduism and Islam and vanished between 9th century and 10th century in India while Buddhism were developed rapidly in China so that China became the true homeland of Buddhism all over the world. Particularly worth mentioning is that Buddhism integrated Chinese culture and develop some branches with Chinese characteristics, like Tibetan Buddhism, Theravada Buddhism.

During the Wei and Jin Dynasties (220-420) the influence of Buddhism spread widely. During the Southern and Northern Dynasties(420-589) the ruling classes further helped the spread of Buddhism by building temples and monasteries, translating Buddhist sutras and constructing grottoes, and many famous monks, scholars and teachers emerged. By the Sui and Tang Dynasties (581-907), Buddhism reached its apex of popularity and splendors, and different sects of Buddhism had been formed in China. Over a long period, Buddhism gradually took root in the feudal society of China, intermingling with Confucian and Taoist thought. It had a strong popular appeal and its ideas made a notable impact on Chinese philosophy, literature and art.

The Influence to China

It is where the sacred Mount Wutai located. At an altitude of around 3000m, Mount Wutai is known as the residence of the Bodhisattva Manjusri, and the number one holy place of Buddhism in China. There were 300 temples in its heyday, but only 47 of them are left today, with a wealth of collections of Buddhist art works, classics, Buddhist sculptures and other heritages. Other famous Buddhist shrines in Shanxi include Yungang

Grottoes in Datong, the Hanging Monastery, and YIngxian Wooden Pagoda 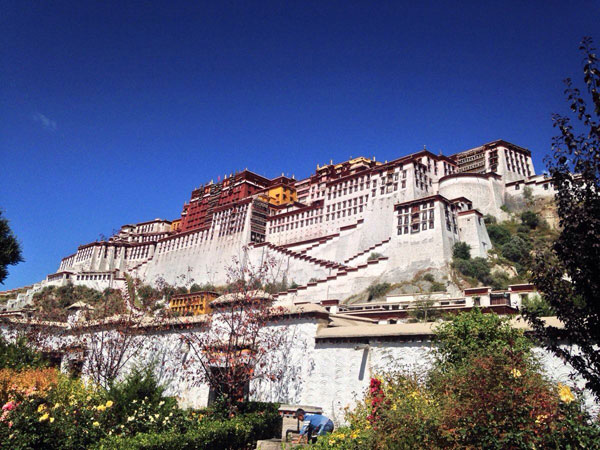 The residence of Samantabhadra Bodhisattva, Mount Emei is one of the four holy Buddhist mountains in China. 30 of the over 100 temples are left and well preserved today, including the famous Wannian Temple, Baoguo Temple and Qingyin Pavilion. The beautiful scenery, splendid Buddhist culture, magnificent Buddha statues and century-old architectures make Mount Emei a UNESCO World Natural and Cultural Heritage site, together with the Leshan Giant Buddha (50km away from Mt. Emei).

100 sea miles east of Jiaodong Bay, Hangzhou Province, holy Putuo Mountain (where Arya Avalokiteshvara practiced Buddhism) is hidden on the Zhoushan Islands, and surrounded by the seas. Every year numerous Buddhist and believers make a pilgrimage to Mount Puotuo to study Buddhism, burn incense and pray. 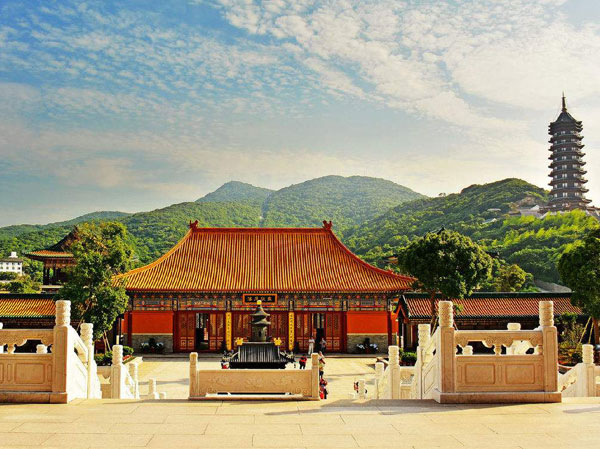 Legend has that Ksitigarbha Bodhisattva used to practice Buddhism on Mount Jiuhua. 20km southwest of Qingyang Town, Anhui Province, it is a branch range of Yellow Mountain, with 99 towering peaks. Mount Jiuhua is not only famous for its profound Buddhist culture, but also the breathtaking mountain views.

The first Buddhist temple in China, it was built in the year of 68 during the East Han Dynasty, when Buddhism began to be introduced to China. The original architecture was magnificent, but partly destroyed in history.

Famen Temple was the royal temple in Tang Dynasty and has been a Buddhist holy land by keeping the finger bones of Sakyamuni. 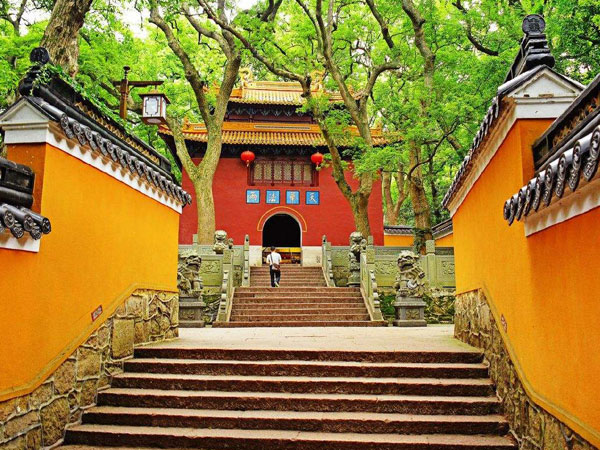