China is a country with profound Buddhism Culture. Buddhism was introduced into China since the Eastern Han Dynasty. At ancient China, people of all different social rankings accepted Buddhism. To show the worship of Buddha, people constructed many Buddha statues. These statues varied in figures and subjects. Here lists some top Buddha statues in China for your reference. If you are interested in Chinese Buddhism culture, these are attractions that you should not miss

With a height of 128m including the 20m lotus throne, it is the tallest Buddha statue of the World. If the building under the statue is taken into account, the height will be 153m. And in October, 2008, in order to form 2 more pedestals, the hill which the Buddha statue stands on was being reshaped. The upper new pedestal is 15 meters tall which make the total height of the Statue to 208 meters.

The name of the Spring Temple Buddha derives from the Tianrui hot spring nearby the temple. The Foguan Temple, standing on the top of Dragon Head Peak, was originally built in Tang Dynasty. It has the reputation of “Bell of Good Luck” and the bronze bell is 116 tons in weigh.

The Guan Yin of the South Sea of Sanya is located on the south coast of Hainan Province, nearing the Nanshan Temple in Sanya City. Guan Yin is a famous Buddha which also named “Avalokitesvara”.

The statue of the Buddha is 108 meters tall. It is a statue of three Guan Yin facing 3 directions: one faces inland China and the other two faces the South China Sea, representing protection and blessing from Guan Yin of the whole China and the entire world. The gestures of the 3 aspects’ Guan Yin are different from each other. One aspect, the Guan Yin is holding a sutra in her left hand and her right hand is gesturing the Vitarka Mudra; the second aspect, Guan Yin is crossing her palms and holding a string of beads; the third one is holding a lotus. The Guan Yin of the South Sea of Sanya ranks the 4th tallest statue of the world and the tallest Guan Yin Statue in the World.

The Nanshan Mountain is also believed to be the auspicious mountain of longevity in Chinese mythology. Take this opportunity to visit the tallest 'Guan Yin' in the world here at Sanya.

Guishan Guan Yin of the Thousand Hands and Eyes is situated in Weishan of Changsha City, Hunan Province. It is a gilded bronze statue with a height of 99 meters, ranking the 4th tallest statue in China and the 7th tallest in the world.

Lingshan Grand Buddha, the spiritual point of Lingshan Grand Buddha Site is a magnificent standing Sakyamunisits statue. It is standing on the south side of Lesser Lingshan region, Mashan Mountain, is one of the land marks in Wuxi. During the Tang Dynasty, the famous Buddhism temple Xiangfu Temple once be built on the very place the Buddha locates, to protect the relic and promote the culture, people set up this magnificent 88-meter-high statue of Sakyamunisits right after the rebuilt temple.The body of the Buddha is 79 meters high, stands on a 9 meters high lotus shaped seat. Its whole body is made of 1560 copper sheet of 6-8mm thick, gross weight of 700 ton, which can cover an area of 9,000 square meters.

Lingshan Grand Buddha Site locates in Taihu Lake Scenery Spot, covers an area of 30 hectares. Mainly consists of a 39.8 meters long screen wall, the totem-pole, the Xiangfu Temple and the grand Buddha statue.From the parking lot, walking about 5 minutes you will reach a square with one big screen wall facing the gate, on which carved the Buddha with a serene look sit up straight on the lotus shaped seat, worshiped by Bodhisattva and Arhat. Round the screen wall and continue your walking, you will see a tall totem-pole. Go further, a grand temple lies on the half-way up the mountain, the grand Buddha just stands after and presents a self-possessed compassionate look.

The Leshan Giant Buddha is located in Leshan city, Sichuan province. It's the tallest stone Buddha statue in the world, which was carved out of a cliff. It’s amazing that the whole Lingyun Mountain is a giant Buddha statue, and the giant Buddha statue is the whole Lingyun Mountain. The site was listed on the World Cultural and Natural Heritage in 1996. The Giant Buddha lies at the junction of the Minjiang River, Dadu and Qingyi Rivers. The stone sitting sculpture faces the sacred Mt. Emei, with the rivers flowing below his feet. Construction on the Giant Buddha began in 713 AD in Tang Dynasty. It was the idea of a Chinese monk named Haitong, who hoped that the Buddha would calm the turbulent waters that plagued the shipping vessels travelling down the river. The rock and mud excavated from the mountain exposing the Buddha filled up the riverbed, creating a more favorable flow of water. Consequently the river did become calmer.

The statue depicts a seated Maitreya Buddha with his hands resting on his knees. Maitreya is the future Buddha, who will appear to preach the dharma when the teachings of Gautama Buddha have faded away. Maitreya was especially popular during the 4th to 7th centuries, and his images are found throughout the Buddhist world, conveying his characteristic air of expectancy and promise.Several drainage passages are hidden in the Buddha's hair, collar, chest, and holes in the back of his ears and chest, preventing the Buddha from serious erosion and weathering. It has also been lovingly maintained on a regular basis throughout his 1,200-year history.

Guanyin of the South China Sea is a statue of Guanyin, located on Xiqiao Mountain, an ancient dormant volcano located in Nanhai District, Foshan City, Guangdong Province. It is the world tallest sitting Guan Yin. Xiqiao Mountain is divided into ten major scenic areas including the Nanhai Guanyin Culture Park, which contains the 62 meters (203 ft) statue of the goddess Guan Yin and the Baiyun Caves which sits on a 15 m pedestal making a total height of 77 meters (253 ft). According to Buddhism, 19th of the second month of the Chinese lunar calendar is the birth date of Guan Yin, 19th June is the day of the Guan Yin become a goddess, and September 19th is the nirvana day of Guan Yin. So, opening day and Foundation Day, height numbers are actually implying the three day. 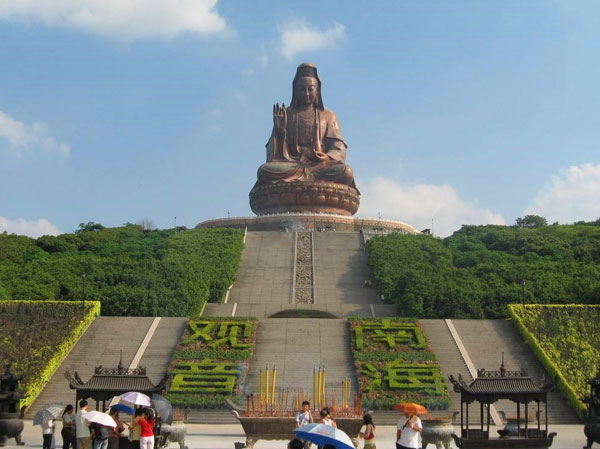 The Big Buddha on Nanshan Mountain——38.66m

Located in Nanshan Scenic Area, Yantai City, Shandong Province, the big Buddha of Sakyamuni was built in 2004, made of bronze, 38.66m high, 380 tons weigh, and made up of 232 Buddha bodies, 108 lotus petals, 302 buns, and 642 pieces bronze castings. The Great Buddha of Nanshan, Yantai, is located in the Lushan Mountain, Longkou City, Yantai, Shandong province. The golden bronze statue of 9999 lifelike sculptures is displayed in the Great Buddha Hall of Nanshan Temple. The historical records of the rise and flourishing of Buddhist culture are displayed in the Museum of Buddhist history. There are also dozens of cultural relics and treasures of Buddhist culture including the relics of Sakyamuni are displaying art in the Museum. 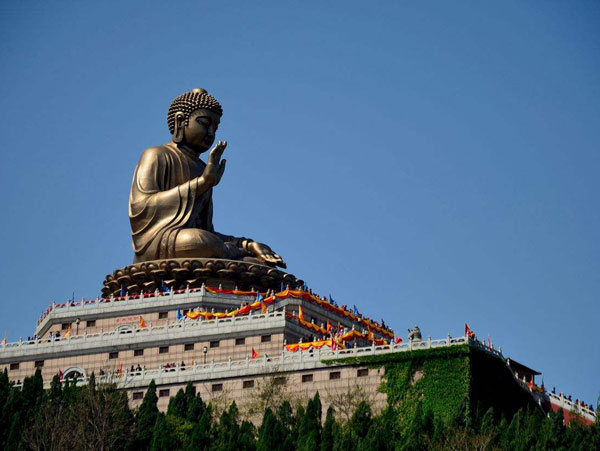 It is the first artistic statue of Shifang Samantabhadra, and made of glided copper, 48m high, symbolizing Amitabha's 48 wishes，it is the world's biggest Golden Buddha Statue. The shifang carries the ideas of Samantabhadra’s 10 wishes and the ten directions in Buddhism. Samantabhadra’s ten heads are separated into three layers, with different looks and expressions, symbolizing common people’s various attitude. 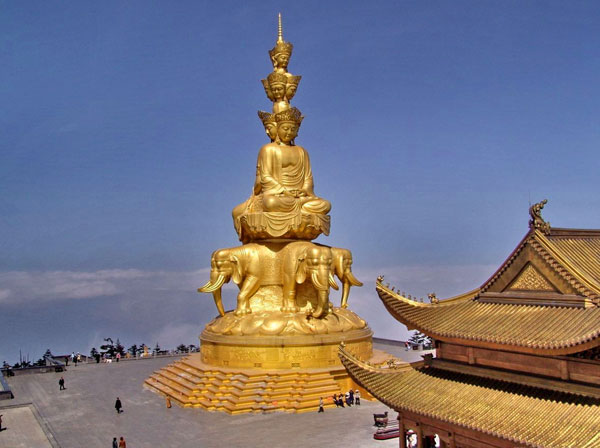 Located at Ngong Ping on Lantau Island, 520m above sea level, Tian Tan Giant Buddha is one of the most famous ritual architectures in Hong Kong and one of the most famous Buddha statues in China. The Sakyamuni statue is made of bronze, 26.4m high and 220 ton weigh, it is also the world's biggest sitting bronze buddha statue. The lotus flower seat was designed in the style of Temple of Heaven in Beijing, 34m high, 250 tons weigh, and welded together by 202 bronze flower petals. Completed in 1993, the Tian Tan Giant Buddha blends the technology of Yungang Buddha and Longmen Buhhda, and is regarded as a perfect combination of ancient oriental Buddhist art and modern technology. Climbing up the 268 stairs to get to the Buddha statue, visitor will have a panoramic view of Lantau Island and the South China Sea. 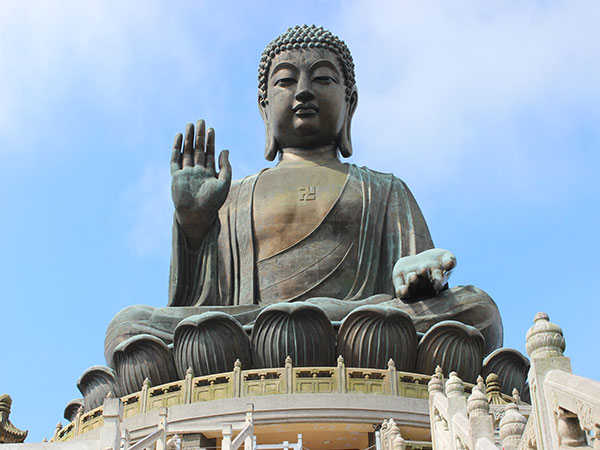