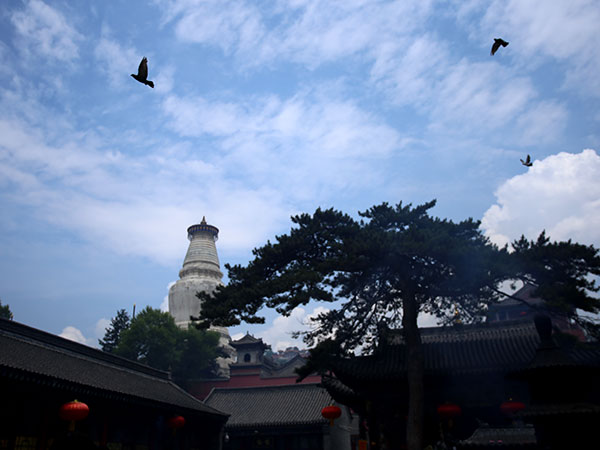 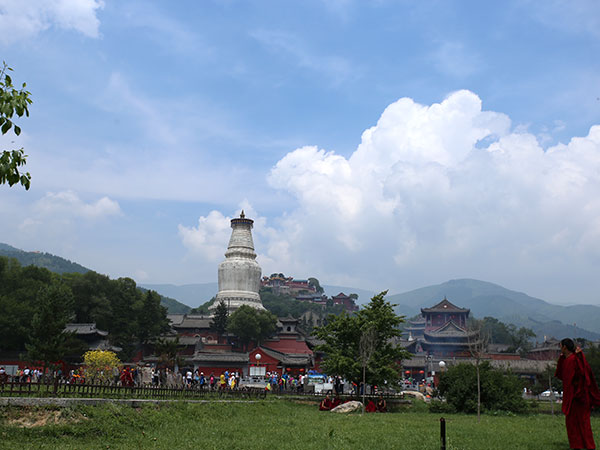 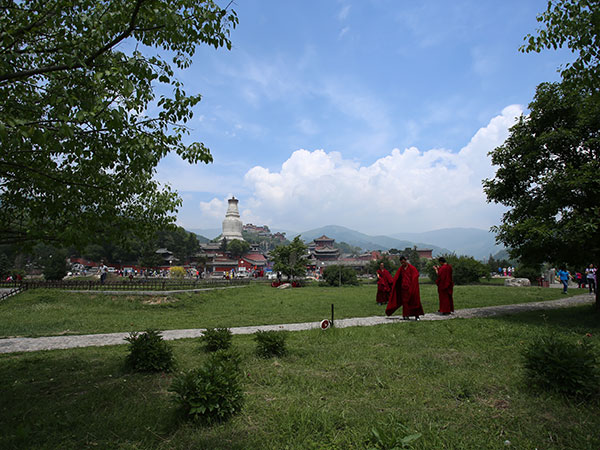 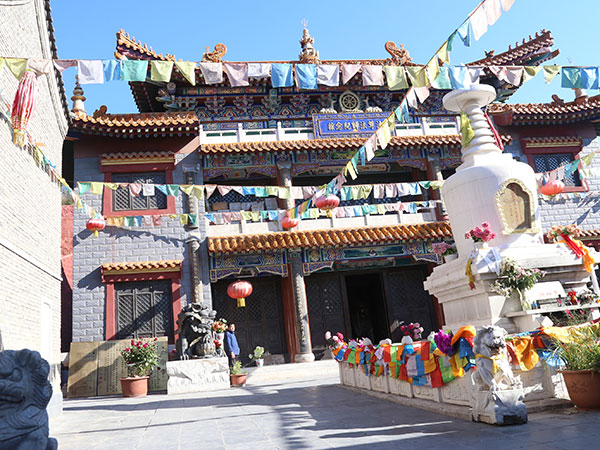 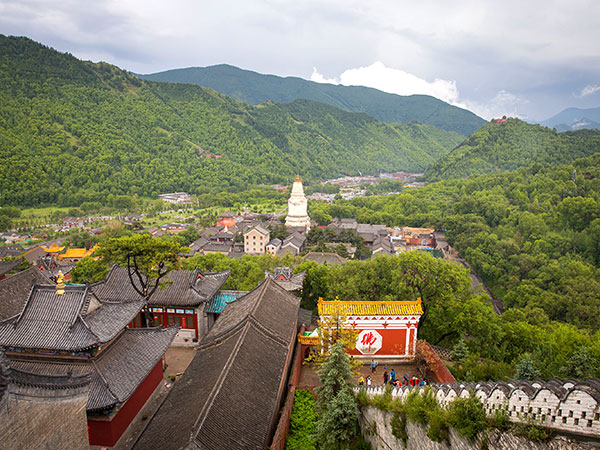 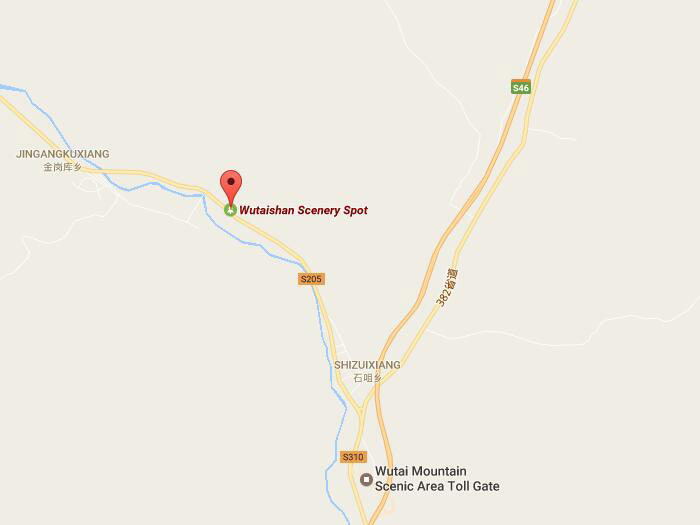 One of the top4 Buddhism temples in China.

Mount Wutai is located in southeast Shanxi, about 230km from Taiyuan City. With Mount Emei in Sichuan, Mount Jiuhua in Anhui and Mount Putuo in Zhejiang, these four mountains are reputed as the “Four Sacred Mountains in Chinese Buddhism”. It is a popular destination for people who are interested in Chinese Buddhism. Ranking as the top 10 resorts in China, Mount Wutai was listed as a member in the World Heritage Sites by UNESCO in 2009.

It takes its name from its unusual topography, consisting of five rounded peaks (North, South, East, West, Central), of which the North peak, called Beitai Ding or Yedou Feng, is the highest, and indeed the highest point in northern China.

Mount Wutai is home to some of the oldest existent wooden buildings in China that have survived since the era of the Tang Dynasty (618–907). This includes the main hall of Nanchan Monastery and the East Hall of Fuguang Monastery, built in 782 and 857, respectively. They were discovered in 1937 and 1938 by a team of architectural historians including the prominent early 20th century historian Liang Sicheng. The architectural designs of these buildings have since been studied by leading sinologists and experts in traditional Chinese architecture, such as Nancy Steinhardt. Steinhardt classified these buildings according to the hall types featured in the Yingzao Fashi Chinese building manual written in the 12th century.

Mount Wutai is consisted of five major peaks which four are situated in four directions and one is in the center.

【Sea Viewing Peak (Wanghai Peak)】
Standing in the east direction, Sea Viewing Peak is an ideal place to have a vista to appreciate the sunrise scene. It is a fantastic thing that tourists stand on the peak and savor the sun rising from the sea in the morning.

【Moon Hanging Peak (Guayue Peak)】
Moon Hanging Peak is in the west direction. People can view the moon in a unique angle. When standing here for savoring the moon, you will find a picture that the moon just looks like hanging on trees.

【Splendid Peak (Jinxiu Peak)】
In the north, there is the Splendid Peak. This peak is a flower garden when in the blossom season. Colorful flowers spread everywhere and green grasslands cover the land, so it is a splendid scene for visitors to see.

【Green Rock Peak (Cuiyan Peak)】
Green Rock Peak is in the center. The flat peak is surrounded by green rocks, thus its name. The huge rocks are named as "dragon-writhing rocks", because they look like moving dragons in sunlight.

【Xiantong Temple】
Xiantong Temple is the largest temple among the temple complex onMount Wutai, Taiyuan, Shanxi Province. The temple covers an area of forty-three thousand seven hundred square meters. There are more than 400 different sizes of rooms and halls, and most of them belong to the architectures of the Ming and Qing Dynasties. Halls and room at the both sides has clear axis, and they are symmetrical. There are seven main hall built in the central axis. From south to north, they are respectively the Goddess of Mercy Temple, Great Manjusri Hall, Mahavira Hall, Wuliang Temple, Thousand Buddha Temple, Bronze Palace, Depositary of Buddhist Texts (Cangjinglou). In addition, there are also Bell Tower, rooms for monk and a variety of side halls. These buildings are unique and splendid. In particular, the most prominent architecture is the Bronze Palace, which is built in AD 1609 in the Ming Dynasty by Miao Feng monk. There are 3 Bronze Palace in China. One is on Mount Emei, one is on Baohua Mount and the last one is on Mount Wutai.

【Shuxiang Temple】
Shuxiang Temple is located on the southwest side of Tayuan Temple. It got the name because it was built for worshiping Manjusri. It was built in early East Jin Dynasty, and rebuilt in Tang Dynasty. Second rebuilding fell in 1325. But it also not survived from a fire disaster. It is hard to list clear how many times rebuilding it had experienced. There is a famous Manjusri Statues inside the temple. The statue is that Manjusri riding sua new ni (a son of dragon, with lion’s appearance). With a height of 9.87 meter, it is the highest colored Manjusri Statue in all the temples in Mt. Wutai. The sua new ni with a height of 3.95 meters. The lively statue is a posture of walking. And the Manjusri in this statue brings people a feel of calmness.

【Tayuan Temple】
Tayuan Temple, which means pagoda yard temple, is located in the south side of Xiantong Temple. It is named because of the large white pagoda which is a symbol of Mount Wutai. It is one of the famous five Zen temples on Wutai Mountain. It is used to be a part of Xiaotong Temple. When repaired in Ming Dynasty, it was wholly separated from Xiaotong Temple. It was named Ta Yuan Temple because there is a large white tower in the temple. This large white tower is the main indicator of the temple. The full name of this tower is Sakyamuni Stupas Tower, commonly known as the White Tower. It is tall and surrounded by the temples on Mount Wutai. So it is recognized as a sign of Wutai Mountain. This tower has a height of 75.3 meters and a circumferential of 83.3 meters. The base is square and the tower is shaped like a bottle, thick and white, with a radius and elegant look. The roof of the tower is covered by eight big copper plates, which represents the Chinese Eight Diagrams. The roof is decorated with thirty-six hanging eaves and each one has a length of more than two meters long. in addition, there are three windbells under each hanging eaves. Along with the windbells on the waist of the tower, there are a total of 255 windbells on this tower. When the breeze blows, all the bells clanks and make a beautiful sound.

【Manjusri Temple】
According to the legend that Manjusri once dwelt in the temple, therefore, this temple is also called as "ZhenrongYuan" (real appearance) or "Bodhisattva Summit". It was built initially in Northern Wei Dynasty (386-534), and since Ming Dynasty (1368-1644) it gradually became the principal temple of Lamaism. In Qing Dynasty (1644-1911), both emperors Kangxi and Qianlong visited here and left epigraphs. Manjusri Temple in Mt. Wutai is located on the top of Gridhrakuta peak. The splendid and magnificent architecture is in the imperial palace style. It is the largest Lama monastery in Mt. Wutai. The temple was built along the mountainous area with a well-design structure. There are 108 stone steps in front of the temple. Inside, Hall of Heavenly Kings, Drum & Bell Pavillion, Mahavira Hall, etc. Each hall is covered by three-colored glazed tiles. Although it has experienced hundreds of year, the halls are still in nice colors. In the stele pavilion in east courtyard, there are two imperial monuments. Each monument is in a height of 6 meters. The characters on the monument were carved in four minorities characters - Han minority, Man minority, Mongolian minority and Tibetan minority. The content was mainly about the history of Manjusri Temple and the event of Qianlong Emperor did worship in Mt. Wutai. The preserved architectures in Manjusri Temple are all rebuilt in Qing Dynasty. So the decorations and structures are all based on imperial style with high cultural value, especially the carving arts inside it.

1.  Pay attention to the temperature in Mount Wutai. Because of the high latitude of Wutai Mountain, the average temp form April to October is betweem 10 C to 20 C, from November to the next April is between 0 C to 10 C.
2.  What to pack: Travel in summers: it is better to take umbrella because the summer is the rainy season. Travel in springs and falls, it is better to take sweaters. And from the Novembers to the next Aprils, it is better to consider about which line is suitable to get there because the road may be blocked by snow days.