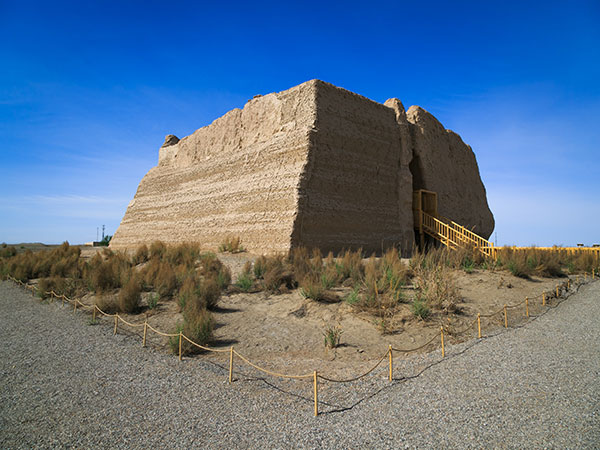 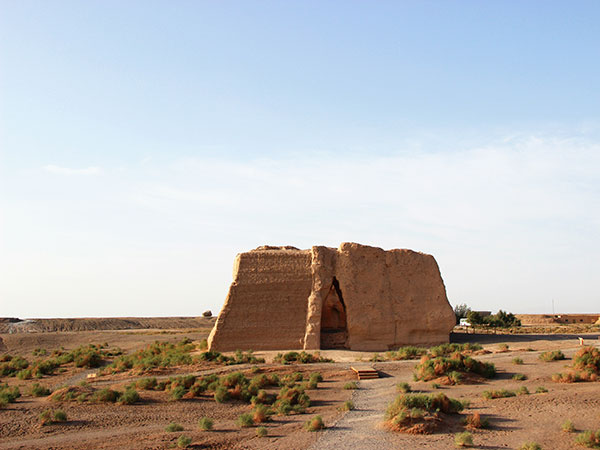 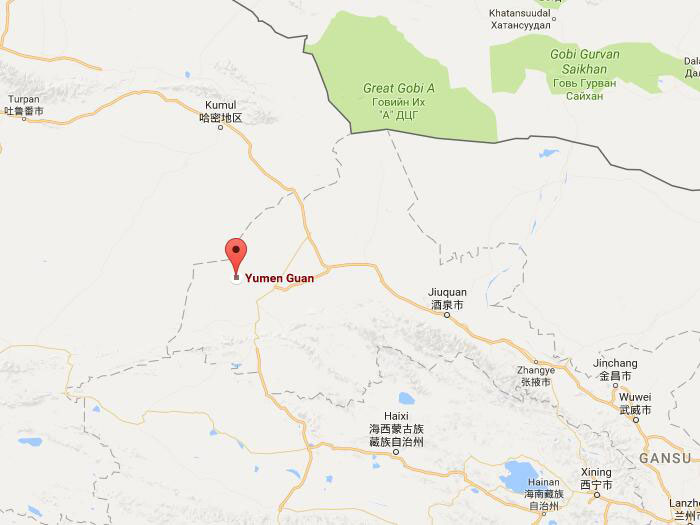 90km away from northwest of Dunhuang, Gansu Province.


Established in the Western Han Dynasty and located in 95 km northwest of Dunhuang, Yumenguan Pass was a strategic pass on the ancient Silk Road. Yumen in Chinese means the jade of Gate. It was so named because the jade of Hotan in what is now Xinjiang region was transported to central China through this pass.

One poet named Wang Zhihuan had a famous line. ‘Beyond the Yumenguan Pass the breath of Spring has never crossed.' The mention of Yumenguan in the poem has made the pass all the more famous. The city is square, with well-preserved city walls and two gates in the west and the north respectively. The city wall is 10 meters high, three meters wide at the top, and five meters wide at the bottom. Both people and horses can go directly up to the wall.

Yumenguan Pass takes a square form and the well-preserved body of wall was built with stable loess with each gate in the west and beneath width 5 meters and a horse-road leading to the upper platform of the pass wall.

The establishment of Yumenguan Pass started in the Han dynasty of Emperor Wu period; it has a history of more than 2000 years. Since the Qin and Han dynasties, warlike Xiongnu nationality threat to the Han nationality. In the second years of Yuanshou period (121 BC), the general Huoqubing led soldiers fight against Xiongnu through western expedition. In the same year, government of Han dynasty divided Hexi to Wuwei and Jiuquan county. In the sixth year of Yuanding period (111 BC), added Zhangye and Dunhuang county, at the same time built Yumenguan Pass and YangguanPass. Since then, Yumenguan Pass and Yangguan Pass becomes important pass in the west of Hexi corridor of the western Han dynasty.

The establishment of Yumenguan Pass, started in the Western Han dynasty Emperor Wu period, it has a history of more than 2000 years. Since the Qin and Han dynasties, warlike Xiongnu was a great threat to the Han nationality. At the beginning of the Han dynasty, the Xiongnu defeated Donghu people in the east, drove off Darouzhi in the west, and occupied Hexi and then was based in Hexi, violated the Han territory. Han dynasty began to carry on peace-making marriage policy to Xiongnu, as for temporary peace. During Emperor Wu period he abandoned peach-making marriage policy and launched a massive military counter-attack to Xiongnu. During Yuan Shou second year (121 BC), Piaoqi general (a title of generals in ancient times) Huo Qubing expedited west with his army and beaten Xiongnu right side heavily. In the same year, Han government divided Hexi to Wuwei and Jiuquan County. Yuan Ding sixth year (111 BC), the government added Zhangye and Dunhuang two counties, at the same time built Yumenguan Pass and Yangguan Pass. Since then, Yumenguan Pass and Yangguan Pass became important pass of Hexi corridor in the west of the Western Han dynasty.

In ancient times, in the west of Gansu, there is a post called "Mamitu", also called "Mamitu (horse lose its way)". The caravan from border Khotan carried jade to the central plains via Yumenguan Pass. The topography here was complex: there were marsh spread all over the place, criss-cross ravines and gullies, forests, and weeds. During the extremely hot weather, in order to avoid heat stroke and heat exhaustion during daytime, the caravan preferred to push on their journey at cool night. Whenever caravan came to here, therefore, it was always a dark and they could not see the direction even old horse that often went back and forth also lost its way in here, it was difficult to known the ropes, so the Yumen Pass named after “Mamitu (horse lose its way)” .

There was a caravan specialized in selling jade and silk, they went back and forth through this road all the year round, and they also got lost in Mamitu. Once the caravan just entered Mamitu and they got lost. People were anxious, suddenly nearby dropped down a lone wild goose. A man in the caravan quietly caught up wild goose, kind-hearted man held it in his arms, ready to set it free when they got out of Mamitu.

After a while, wild goose said to the young man with tears and rumbling sound: "rumbling, rumbling, let me eat and we would not be lost." After listening to its words, he knew that the wild goose was left behind because of hungry, and immediately took out his own dry food and water to the wild goose. After eating, the wild goose flied into sky, hovered constantly and guided caravan walked out of “Mamitu” and small reached the destination Small Fangpan city smoothly.

After a period of time, the caravan was lost again in the Mamitu, the wild goose flied in the air again and said: "Rumbling rumbling, caravan lost. Rumbling rumbling, Fangpan embed with jade." And the wild goose led the caravan out of Mamitu again. Only the young man who saved the wild goose understood the goose's words, and told the leader: "the wild goose tells us to embed a luminous dark green jade, so that caravan have a target will never get lost." The leader thought in the mind, luminous dark green jade valued thousands of silvers, and he would not be willing to part with his money so he did not take his advice.

They didn’t expect that the next time got lost again in Mamitu, and they found no water for a few days, everyone and camels were thirsty and dry, and it was difficult for they to move a single step, their lives were in danger. At that moment, the wild goose flied back again and shouted in the above: "the caravan lost, Fangchen need to embed jade, if you don’t part with jade I will never lead the way." The young mean told his leader and leader asked the young man what to do in the end, the young man said: “you kneel down and swear to wild goose that you will embed jade and keep your promise.”

The leader immediately followed the young man, kneeled to goose, and later the wild goose span in the air for a moment and then guided the caravan got out of Mamitu again. The caravan was saved. Arrived at the city of Small Fangcheng, the leader immediately picked a biggest and best luminous dark green jade and embeds in the top of the pass tower. When the night fell, the jade would shine, people could see it clearly from dozens of miles away, and the passing caravan had a target and never lost. From then on, the Small Fangcheng is renamed "Yumenguan Pass" (Jade Gate Pass).But in fact, Yumenguan was built by the emperor Wu, and due to this is one of the important traffic arteries in ancient times from our country to the western regions, people input Hetian jade from western region will go through this pass so it gained the name Yumenguan Pass.

【Car rental】
About 90 kilometers from Dunhuang to Yumenguan Pass connected by the desert road, the car basically can pass. There is no direct public transportation, suggested charter a car or find a local travel agency to provide transfer service to there. Charter fee is around 300 Yuan.

【Chinese Name】: 玉门关
【Recommended Visiting Hours】: 1 to 2 hours
【Best Time to Travel Yumenguan Pass】: Every May to October is the best time to visit Yumenguan Pass.