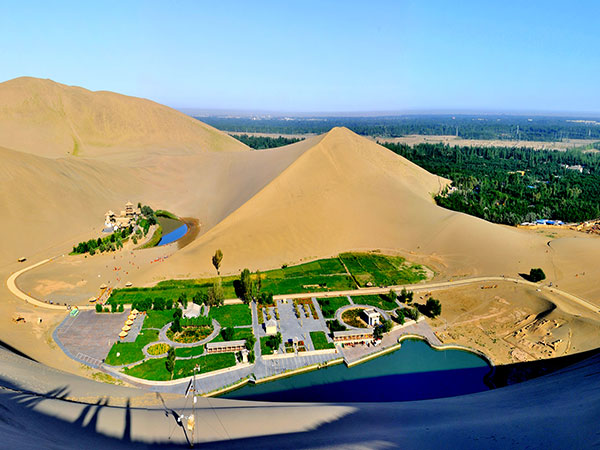 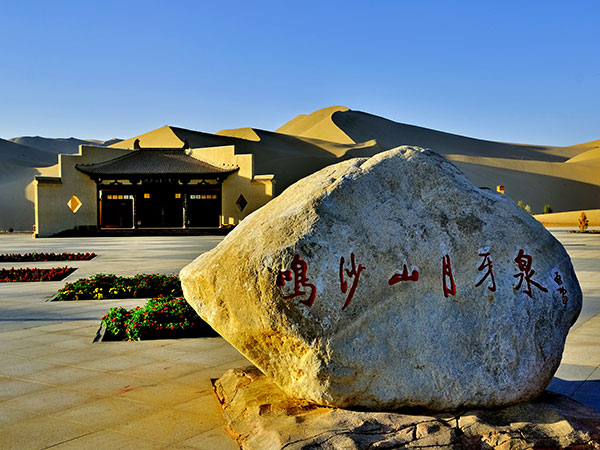 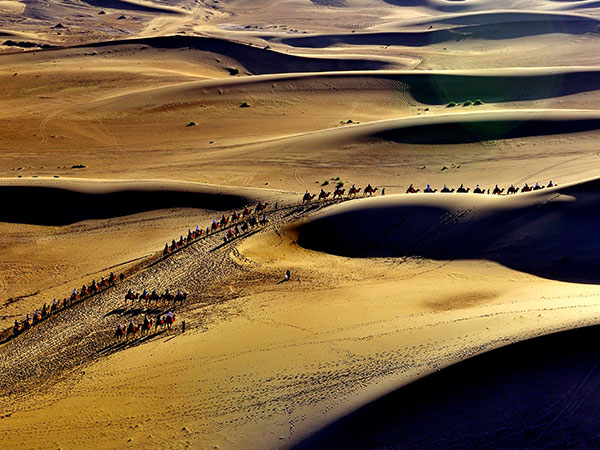 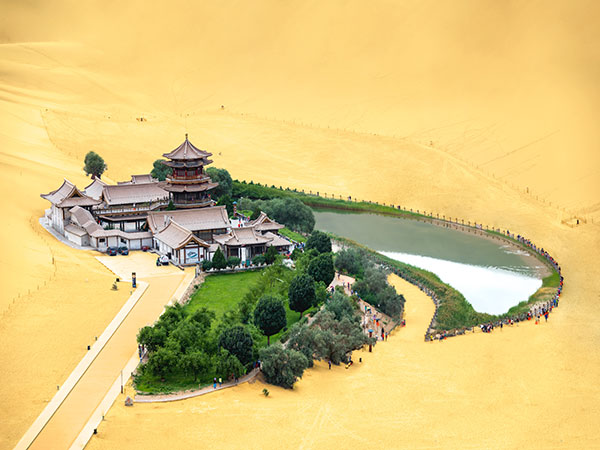 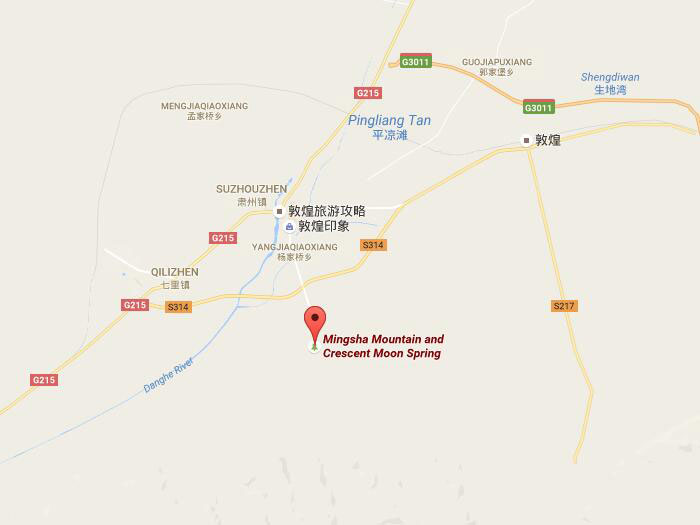 Singing Sand Dune (Mingsha Hill) starts from Mogao Grottoes in the east. It is 40km from east to west, and 20 from south to north. Mingsha (whistling sands) Hill and Crescent Spring scenic spots are 7 kilometers away from downtown Dunhuang and cover a total area of around 200 square kilometers. The dune is with an elegant shape. When people slide down along the slopes, a sound will be heard, hence the name.

Singing Sand Dune (Mingsha Hill)  is piled up with sand in five colors of red, yellow, green, black and white. The so-called singing sand does not sing by itself, but creates singing sound when people tread or slide on the surface of the sand, which is a kind of miracle of the nature. Some describe this phenomenon as "an astonishing sound of the nature". When sliding on the steep slopes of sand dunes from the top, the drifting sands look like beautiful brocades hung up on the sand dunes or dancing golden dragons, accompanied with beautiful singing sound. The singing sounds like the sound from traditional Chinese music instruments. Hence, the mountain gets its name because of the singing sound of the sand.

Crescent Spring is at the northern foot of the Mingsha Hill and is 118 meters from east to west and 25 meters from south to north. The water is fove meters deep. The crescent-like lake is surrounded by the sand but never buried by it. The water in the lake is very clear all year around. 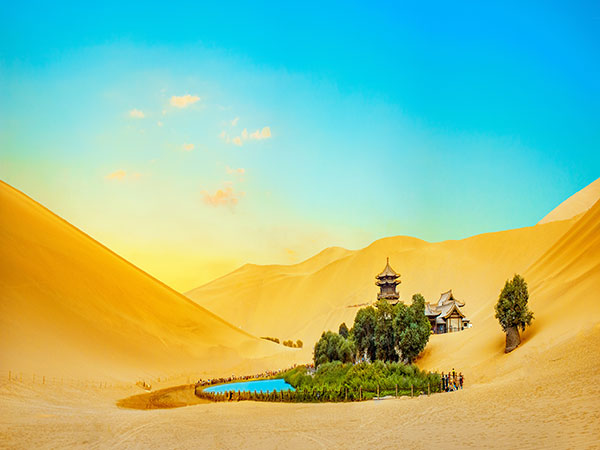 The Singing Sand Dune (Mingsha Hill)  and Crescent Spring are twin sisters of natural beauty in the wild Gobi Desert. The sand mountain sings because it is divine while the spring is beautiful because it is miracle. Tourists get thrilled and distracted no matter when they have a bird's-eye-view of the beautiful sand dunes from the top of the mountain or wander beside the clear spring. It's no surprise to have the saying that Singing Sand Dune (Mingsha Hill)  helps people free from all worries and Crescent Spring purifies people's minds.

Crescent Spring in the early Han Dynasty was already a tourist attraction. Tang dynasty there was barge in Crescent Spring and along the spring was the temple. On the south bank of the spring there was an original set of quaint, picturesque buildings, from the east to the west there were hundreds of rooms including Goddess Temple, Dragon King Palace, Bodhisattva Temple, Medicine King Cave, Thor Altar and more. In main temple there are hundreds of painted sculptures with the hundreds of painted murals. Here, at the time, pavilions and temples were glorious, colonnades. There is green and lush forest, the spring mingled with the scenery of the mountains that reflected, the ancient temple has endless stream of pilgrims and there are incenses curling upwards around a year. According to historical records, Han dynasty Yuanding Period fourth year (113 B.C.), the emperor Wu got pegasus from Wogui Pool, descendants believed that Crescent Spring was Wogui Pool so they established a stone tablet written “Han Dynasty Wogui Pool”. Thus the special Crescent Spring became even more legendary.

About the forming of Crescent Spring and the Singing Sand Dune, there is a story: Once upon a time, there was no Singing Sand Dune or Crescent Spring, but there was a Leiyin Temple. One year the beginning of April, the temple held the Bathing Buddha Ceremony, devout men and women came here to burn incense and worship. When Buddhist activity carried out to the "holy water", the abbot served a bowl of holy water handed down from Leiyin Temple and placed in the front of temple door. Suddenly there was a Tirthaka warlock who wanted to challenge the abbot so as to see who was superior. Warlock waved his sword, in a split second, dark all around and there was sharp wind blustering, sands blotted out the sky and covered up the earth and Leiyin Temple was buried in the sand. Strangely, the bowl of holy water in the front of the temple was safe and sound, still put in there. The warlock played his entire spell again to fill the bowl with sand, but failed, the bowl was not filled with even a grain of sand. Until there was formed a sand hill around bowl, holy water bowl was still steady. Warlock had left under a cloud. After a few steps, they heard a great crash, half bowl of holy water inclined to become a clear spring, and warlock became a puddle of black stone. Originally the bowl of holy water was the Buddha Sakyamuni gave Leiyin Temple abbot, from generation to generation, and specially removed ill fortune and avoid calamities, therefore it is referred to as the "holy water". Because the Trithaka warlock did evil and destroyed the beings, the Sakyamuni make its presence and brought of punishment, the bowl was subjected to tilting springs, formed the Crescent Spring.

There are four kinds of explanation to explain the origin of the Crescent Spring:
First is that fossil river course residual lake. Some people believed that Crescent Spring is a fossil river course near Danghe River. Long time ago, Danghe River changed the route, most of the fossil river courses were flooded with quicksand, only the section of Crescent Spring was low-lying because of the underground current exposed and collected into a lake. The lake was repeatedly supplied by underground current, so that it would not be dried up. Measurement in the 1950 showed that Crescent Spring water surface was 218 meters long, from north to south was 54 meters, the average water depth was 5 meters, the deepest more than 7 meters.
Second is that fault permeability for spring. The south of Crescent Spring there is an east-west fault, upper wall of fault lifted underground aquifer, footwall dropped to phreatic surface and undercurrent came out become spring.
Third, wind erosion lake. The original deflation hollow intensified with wind erosion, when reach water table, there was formed spring lake within the barchan bay. As sand hill surrounding Crescent Spring is north-south high, intermediate low, wind from east into round depression will flow upward side, under the action of wind sand is always roll-up along the mountain ridge, so sands will not be blown into spring, and sand hill would always remain ridge like the shape of the blade.
Forth, artificial digging. Some people think that Crescent Spring shape like half new moon, just like the result of the artificial modification, and in ancient books that recorded sand drain that claimed well must be the result of human labor.

【Chinese Name】: 月牙泉和鸣沙山
【Recommended Visiting Hours】: 1 to 2 hours
【Best Time to Travel Crescent Spring and Singing Sand Dune】: From May to October is the best time to visit Crescent Spring. Visiting Singing Sand Dune, the best time should be afternoon and toward evening. Recommended tourists who want to visit Dunhuang avoid winter vacation, during this time the average temperature of Dunhuang would be 9.3 degree below zero, the day and night temperate difference is quite large, therefore it is not suitable to travel during winter.