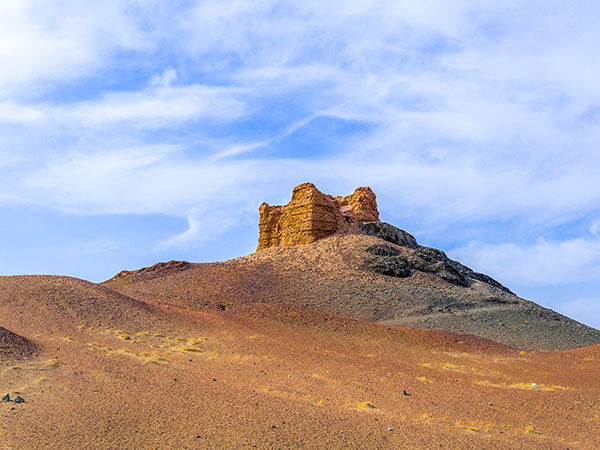 Important part of the Silk Road.

The Yangguan Pass, also known as the Southern Pass, sitting 75 kilometers southwest of Dunhuang, was originally built by Emperor Wu as one of two most important passes protecting in the Hang Dynasty. The other one is the Great Wall of Han Dynasty.

To certain extent, Yangguan Pass has been ruined with numbers of sections buried in the shifting sands after thousands of years. As a result, it is hard to have any walls in sight, with the only visible sections being the foundations of some of the walls. To the south of the mound is an expanse containing millions of pieces of broken tile over an area of twenty square kilometers, some of the last remaining evidence of civilization here.

The Yangguan Pass was the important pass on the Southern Way of Silk Road, and the significant gateway connecting Central China and Western Regions. Today, the Yangguan Pass is the vital part of the Silk Road culture, and one of the representative relics of China Great Wall culture.

Yangguan was built in the Emperor Wu period in Han dyansty, Yangguan in ancient time had abundant water, Wogui Basin and west earth ditch is the largest independent water, at least thirty-four thousand years ago, here has become the oasis basin, have developed fire-flame trench culture.

As early as 121 BC, Western Han dynasty in order to resist invasion of frontier by Xiongnu, the government established four counties of Wuwei, Zhangye, Jiuquan, and Dunhuang in Hexi corridor, at the same time set up Yangguan Pass and Yumen Pass. Yangguan Pass was built in the Han dynasty Yuanfeng period 4th year (107 BC), and had set Duwei (a military rank) to manage military affairs, from the Han dynasty to the Tang dynasty, Yangguan Pass has been the inevitable pass of the silk road south route.

Since the Western Han dynasty, many dynasties regarded here as a military stronghold and sent troops guarded, also many soldiers had defended and went on expedition from here; many merchants, monks, envoys and visitors had to check in and out from this pass to get out. Eminent monk Xuanzang went on a pilgrimage for Buddhist scripture from India, his route was going the south route of the Silk Road, and then went east into the Yangguan Pass and back to Chang’an.

During Han and Tang dynasty, the soldiers in Yangguan Pass lived with this spring. West Earth Ditch upstream was dry at ordinary times, the downstream had springs converged to stream and flowed to north, sometimes there were flash floods. After the flood peak, ditches were collapsing and widened the river, a large number of sediment flowed down the river, therefore formed downstream sedimentation. Sediment under the northwest wind blown and carried, there formed sand ridge, Yangguan Ancient City gradually was destroyed by water and buried by sand.

Abandoned after the Sui and Tang dynasties, Yangguan lied waste and only remained beacon towers what is referred to as "the ears and eyes of Yangguan" in the gobi desert.

Yangguan, a buried ancient city by shifting sand. Here remained such as housing, farmland, and channel, and when after the strong wind, these sites can be clearly seen. Since the ancient times, Yangguan in people's minds was always sad and lonely. Today's Yangguan, is no longer the synonym of “dreariness” in the poet of Wangwei, Yangguan today is a good place with green trees, clear spring, and clusters of grapes.

【Beacon Tower in Han Dynasty】
Long history made beacons remained rare, from Yangguan Pass north to Yumenguan Pass there is 70 kilometers of the Great Wall which is linked together, every 10 miles there is beacon, near the Yangguan Pass there are also tens of beacons. Especially in the north of the Antique Beach on the top of the Dundun mountain is the biggest and the highest beacon.

Former Yuangguan city has already gone, only left a Han dynasty ruins of beacons, standing in the Dundun Mountain, rely on the hill, people can have a panoramic view for miles. Dundun Mountain beacon is in the commanding heights of the Yangguan Pass, it is the only material object that witness Yangguan history. It is in the south of the mountain, there is an endless big beach which locals call it "Antique Beach". Here the boundless quicksand, the up-and-down sand dune strewn at random from east to west natural arranged in more than 20 big ridge dunes. Between ridge dunes there is gravel ground. There are many remains such as Tang pottery shards, bricks, tiles, weapons and accessories in the beach. So the locals have a saying that “going into the Antique Beach, you will not be back empty-handed”.

【The Inscription Corridor】
Beacon tower is tall standing in the Dundun hill, there is built the celebrity inscription corridor. People can walk in the corridor, as well as enjoy contemporary celebrity calligraphy, and poetry. And people can appreciate the ancient ruins of Yangguan, also can overlook the natural scenery of oasis, desert, and snow mountain.

【The Silk Road】
One want to visit the Silk Road must go to Dunhuang, and if one goes to Dunhuang he will go to visit Yangguan. When it comes to Yangguan, we have to mention its relationship with the Silk Road. When the Silk Road opened up, the caravan started from Chang’an, and recharged in Dunhuang, and then departed from two passes, the Yangguan Pass is one of passes. After Yangguan, caravan passes across the desert to the Shanshan (Ruoqiang now in Xinjiang province), and then to Khotan, through the Congling (now the Pamirs and Karakoram) arrived at Anxi (now Iran plateau and two river basin), the caravan met another caravan that started from the Yumen Pass. Then they went to Seleucia, the farthest place they reached was southern Turkey and Egypt.

• Imitate Enter and Exit the Pass Ceremony of Tang Dynasty

Two teams of people made up of 12 to 24 who wear clothing of soldiers of the Han dynasty will line up to welcome tourists in front of the gate. And then 8 greeters of scenic spot wearing in the western regions nationalities clothing performing the cheerful ethnic celebration dance, the performance time lasts for about 5 minutes.

After entering the Pass, narrator takes tourists to visit two cultural relics exhibition hall. After visiting the exhibition hall, the narrator take visitors go into the Yangguan commandant mansion, apply for customs clearance certificate. Selected the certificate you want and write your name and date of customs clearance, then after being stamp by government officals you can go to the outside of Yangguan Pass to check out. After drinking the liquor for departure, you can choose to ride a horse or take sightseeing bus on Yangguan Avenue to visit the old site of Yangguan Pass, so far the ceremony is finished.

After visiting the museum, tourists ride on horseback, stepping on the ancient Yangguan Pass towards the deep of desert (the round about 8 km) to find ancient river course (Xitougou water). Riding a horse along the ancient Silk Road, passing through the antique beach with horse bell, you can experience the vast desert like traveling merchants did in the past time.

When you return from another way, you will see an ancient city loomed within sight, mysterious, and there is an ancient barracks. In the barracks near the scenic area there will be a fire welcome party. After the party begins, the guests sit around to watch program and have dinner together.  【Recommended Visiting Hours】: 3 to 4 hours
【How to Get to Yangguan Pass】: from Dunhuang to Yangguan usually needs to rent a car, or take local tricycle or ride a horse to there.
【Best Time to Visit Yangguan Pass】: the best time to visit Yangguan Pass is summer and fall. In spring and fall, due to large temperature difference there is sand wind occasionally, suggested tourists to bring heavy clothing to keep out of the cold. In summer, because of lots of outdoor activities and dry climate, suggested tourists to bring enough sunscreen, lip pomade, sunglasses, sun umbrella, etc. In winter, the climate is dry and cold, recommended people to keep warm and wear gloves.