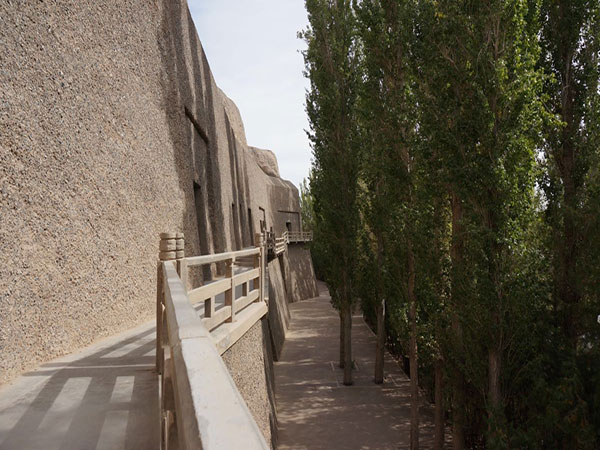 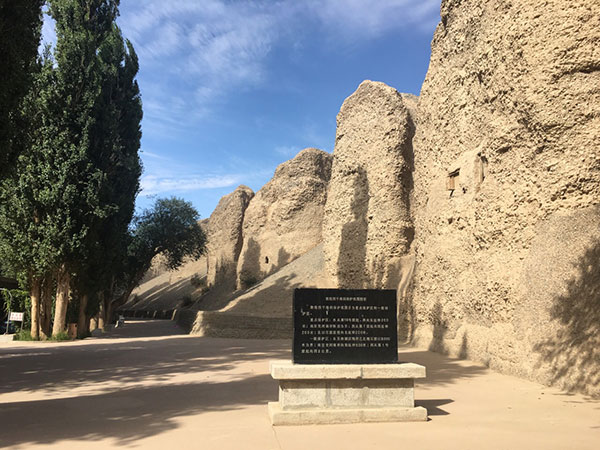 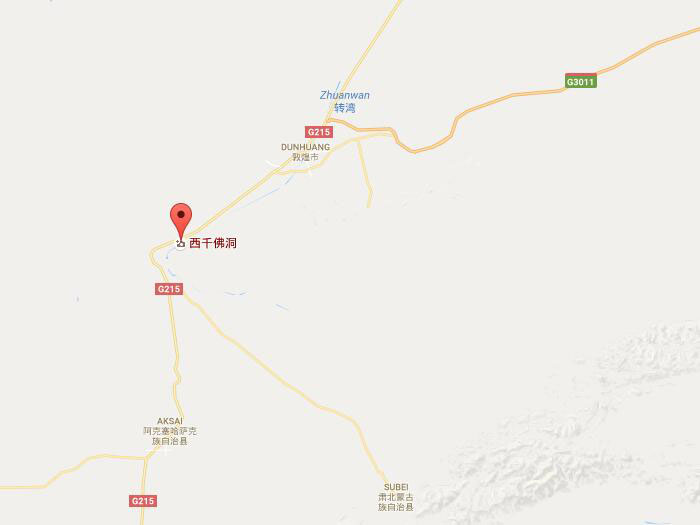 
The West Thousand-Buddha Cave is hewn on a cliff beside the Danghe River 35 km south of Dunhuang. Because the frescos in this cave are similar in structure and artistic style to those found in Mogao Caves, the Western Thousand-Buddha Cave is considered as Dunhuang Buddhist art. Although the exact ages of the caves are not known, there is speculation that this cave may have emerged earlier than the Mogao Caves did.

Now there are 16 caves which were carved by the Northern Wei dynasty, only nine caves open for looking, other caves are unable to step into so can only look over the cliff. The cave shape and mural art style is the same as the works at the same time in Mogao Grottoes, and its creation time is at least in the same time with the Mogao Grottoes. In the east of Northern Wei dynasty fifth grotto caves center column there is a article that expressed Buddhist Tanzang’s desire, hope or wish for his dead grandparents and parents statues, there are 70 words can identify. These kinds of handwritings in Northern Wei dynasty are very precious and have a high historical value. Among nine well-reserved grottoes, in the center of grottoes there are central seats, and around the grottoes was carved niche with the Buddha figure inside, the walls were painted Bhadrakalpa Thousand Buddha, Buddha nirvana image. On the center seat and the walls of the Buddha, there were painted Vajra Guardian.

The most spectacular murals are located in Cave 15, which is not open to the casual visitor without payment of an additional fee. The stunning blues and muscular bodhisattvas of the Northern Wei (Cave 5) and Northern Zhou (Cave 6) are in real contrast to the plump, feminine bodhisattvas of the Middle Tang (Cave 15).

There are 16 caves now and five of them were built during the Wei and Jin dynasties and the rest caves were built in the Tang Dynasty. The beautiful scenes exist in front of the caves with green trees growing. And a nearby brook runs clear and clean, making this impressive repository of Buddhist art feel like Xanadu.

West Thousand-Buddha grottoes and Mogao Grottoes experienced similar ups and downs, affected by various natural and man-made destruction, the art treasures there suffered great losses. In recent years, government reinforce and repair the caves, restore the integrity and stability of cave cliff body what will be collapsed to ensure the safety of tourists. Today, the West Thousand-Buddha got effective protection, there are 10 open caves.

Dunhuang cultural entertainment activities are very rich, every year of spring, there are folk spontaneous organizations the costume dance activities. At ordinary times, there is traditional opera performance which commonly known as playlet. “Summer of Dunhuang” art performance, is a large-scale song and dance performance, usually hold from June to October each year at 18:00-23:00 every night, which shows the strong silk road culture characteristics. It focus on the Mogao grottoes material as the prototype, uses dancing as the theme, recreates the dancing, costumes, and music of all ethnic groups along the Silk Road.

How to Get to West Thousand-Buddha Cave