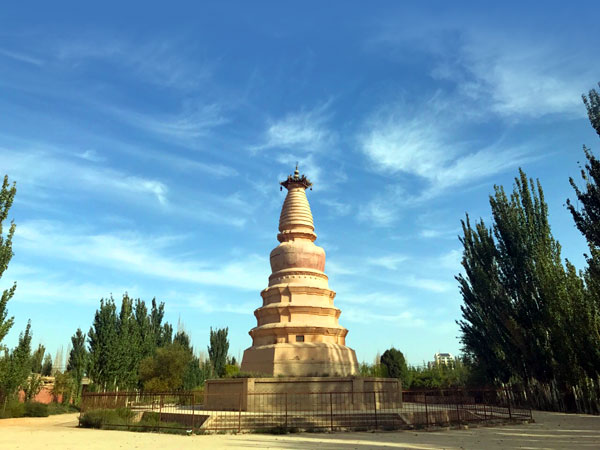 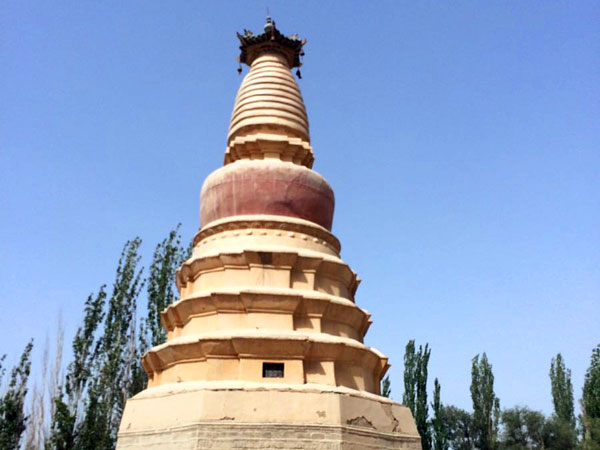 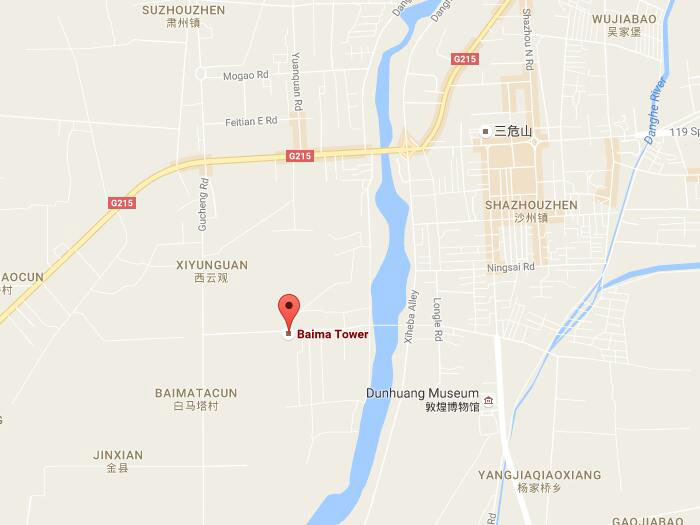 
White Horse Pagoda was originally built in 386 AD. Taking the advantage of its geographic location it became a major stop on Silk Road.

The White Horse Pagoda has nine-storage, with a height of 12 meters and a width of 7 meters. People repaired the structure in every dynasty, therefore the White Horse Pagoda keeps its original beauty and always take the lead among the tourist attractions in Dunhuang as is regarded as "scenery within the scenery".

It was said that Emperor Fu Jian of the Former Qin sent General Lu Guang against the western regions and won completely. When he came back to the capital , he tooke Kumarajiva, the famous translator of Buddhist Scriptures from the Qiuci Kingdom of the western region who used the white horse carrying the Buddhist Scriptures, but the white horse died in Dunhuang. So the White Horse Pagoda was built in memory of the white horse.
In fact, in the long history of Buddhism, along the Silk Road believers had built many temples and caves, in order to pay their respect to those monks who had dedicated their life to the spreading of the Buddhism. The White Horse Pagoda is just one of these buildings and tourists who want to cover the ancient Silk Road will not miss the opportunity to visit it.

White Horse Pagoda is grand with 9 floors, 12 meters high, built with adobe bricks, columns outside coated with cob and lime. The basement layer is octagonal and built by laying bricks or stones, faced with 3 meters wide; second to fourth layer present angular overlapping shape; the fifth layer protruding nails around the pagoda, upon the nails are lotus petals; sixth layer is tower body of Tibetan style; and the whole tower pagoda presents lama style of Ming dynasty.

【Chinese name】:白马塔
【Transport】: From White Horse Pagoda to Dunhuang, there is 2 miles, you can take taxi to there or rent a bicycle to there. From Dunhuang city to there costs around 5 RMB, from Danghe Scenic Spot to there is 10 minutes by walk.