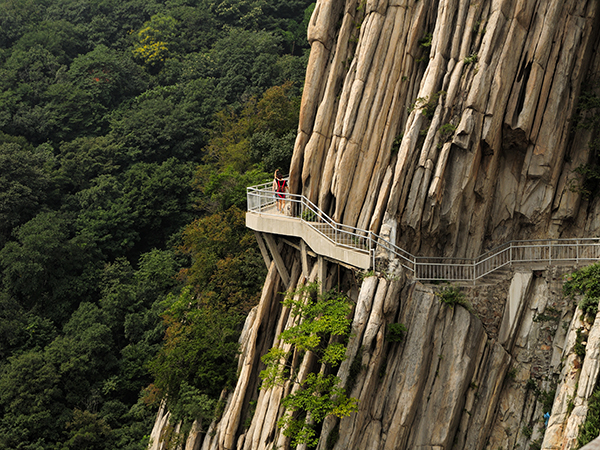 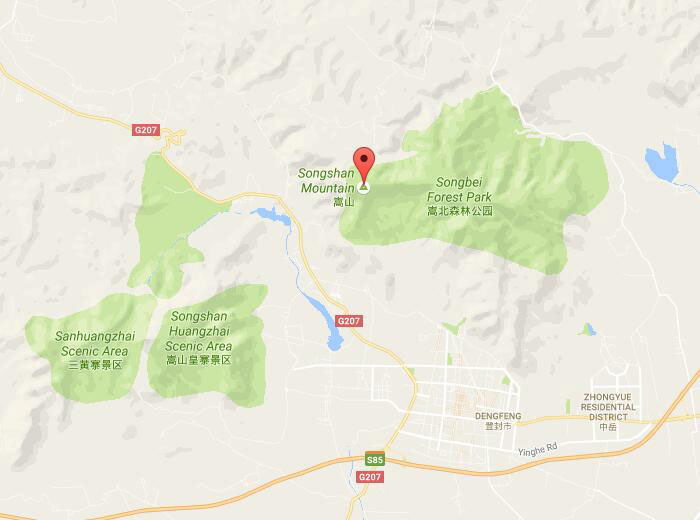 Dengfeng city, in the heart of Henan Province, China.


As the highest mountain among the Sacred Five Mountains of China, the essence of Mt. Songshan trip is the Shaolin Temple, which is situated right on the mountain. Mt. Songshan is located in the northwest of Dengfeng County and reputed as the Central Sacred Mountain among China's Five Sacred Mountains. Mt. Songshan stretches more than 60 km across from east to west. It consists of two mountains - Taishi and Shaoshi, with 36 peaks altogether. It is about 70 Km from Zhengzhou and the trip takes about 2 hours from Zhengzhou. Its highest peak, Liantian Peak, is 1512 meters.

Mt. Songshan got its fame from being the place where the Indian monk Batuo founded the Shaolin Temple in 495 A.D. Few years later in 527 A.D. another Indian monk, Damo (or Bodhidharma) moved to the temple to teach the Chan sect of Buddhism, best known as Zen Buddhism (Zen is the way Japanese read the Chinese ideogram for Chan).

While besides Shaolin Temple, Mt. Songshan itself also gets many valuable things to see. Mt. Songshan also boasts a large number of showplaces and cultural relics. The most famous Shaolin Temple is located here, where Shaolin monks exercise Qigong and other Shaolin Kong-fu (martial arts). There are some other temples in the mountain, such as the Zhongyue Temple, which is nicknamed "the Little Palace"; the Fawang Temple and the Huishan Temple, the oldest temples extant in China; two earliest and well-preserved astronomical observatories extant in China; etc. Mt. Songshan abounds in stele carvings as well, totaling more than 2,000 pieces, left by famous calligraphers like Yan Zhenqing, Su Dongpo, Huang Tingjian and Mi You, etc.

Highlights to See in Mount Songshan

【Shaolin Temple】
Shaolin Temple is located in the north of Shaoshi Mountain in Mt.Songshan area. It was originally built in 495. This temple is traditionally considered the birthplace of Zen Buddhism. The main attractions to see in the temple include the Hall of a Thousand Buddhas, the Shadow Stone, depositarry of Buddhist texts, Mahavira Hall, etc. The Hall of a Thousand Buddhas is the largest building in the temple. In the Shadow Stone, you can see Bodhidharma’s shadow burned into the rock from his years of meditation.

【Pagoda Forest】
Pagoda Forest here is the largest pagoda forest of Buddhism in the world. It is sited only about 300 meters westwards of Shaolin Temple and covers an area of about 20,000 square meters. Here is where 231 eminent Shaolin monks are honored with shrines. There are nearly 231 stone and brick pagodas aging from the Tang, Song, Jin, Yuan, Ming and Qing dynasties (618-1911), as well as modern times. If you can escape the vendors walking around with prayer beads for sale, it is really quite lovely to wander through this quiet wooded place.


【Zhongyue Temple】
Zhongyue Temple is a sacred place of Taoism and one of the earliest Taoist temples in the country. It is sited in the eastern foothills of Mount Songshan’s Taishi Peak. It was first built in the Qin Dynasty (221-206 BC) and originally known as Taishi Temple. The buildings in the temple, covering an area of over 100,000 square meters, went through extensions and rebuilt for many times. The last time they were rebuilt was during Emperor Qianlong’s reign in the Qing Dynasty (1644-1911). The axis, a flagged pathway 700 meters long, extends from the front Zhonghua Gate in the south to the rear gate of Yushu Tower in the north. The east and west wings of the temple consist of the buildings, each having a small separate courtyard. The temple houses many relics with 330 old cypresses, 100 stone steles, iron warriors, sacred ding tripods, etc..

【Songyue Pagoda】
Songyue Pagoda is sited in the south foothills of Mount Songshan’s Taishi Peak. Constructed during the Northern Wei Dynasty, this pagoda is one of the few intact sixth-century pagodas in China and also the earliest known Chinese brick pagoda.

【Best time to visit】: March to May, September to November are the best time periods to visit the Mount Songshan area. Both of the two periods are neither too cold nor too hot, with less rain and beautiful views. March to May is the spring time in the area. Here will be covered with all kinds of flowers and green trees. September to November is the autumn time, when is the best time to see fantastic autumn view with red leaves.
【How to get there】: one may take Bus Route No. 1, 2, 3, 6, 8, 9, etc. in Dengfeng City center to get there.