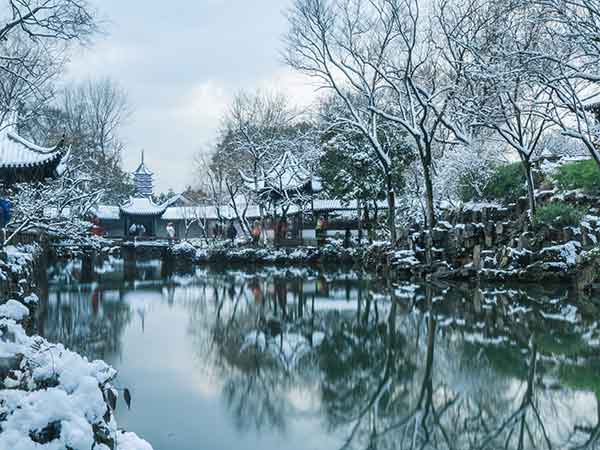 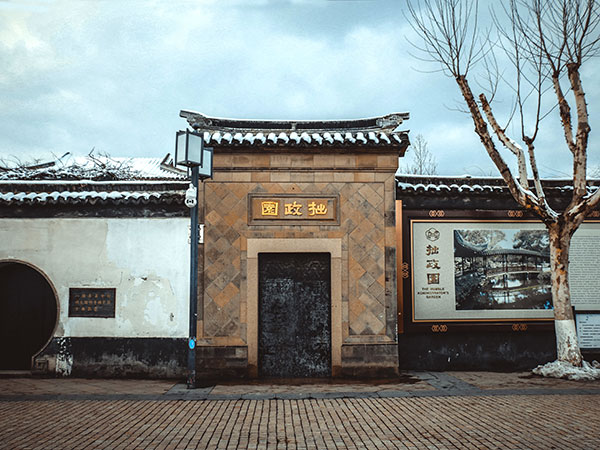 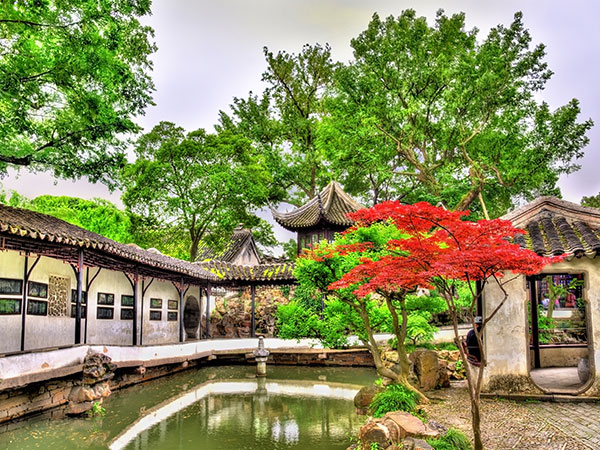 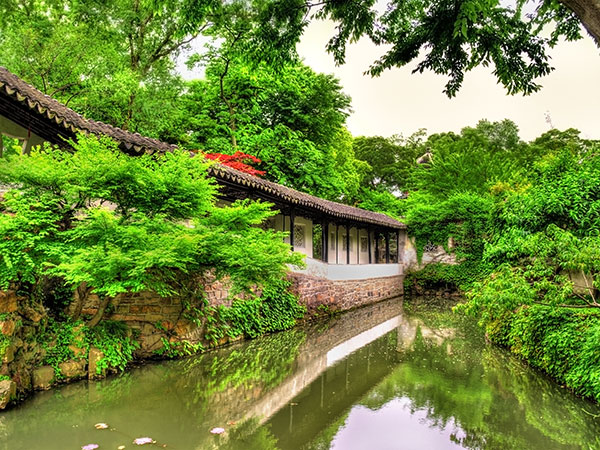 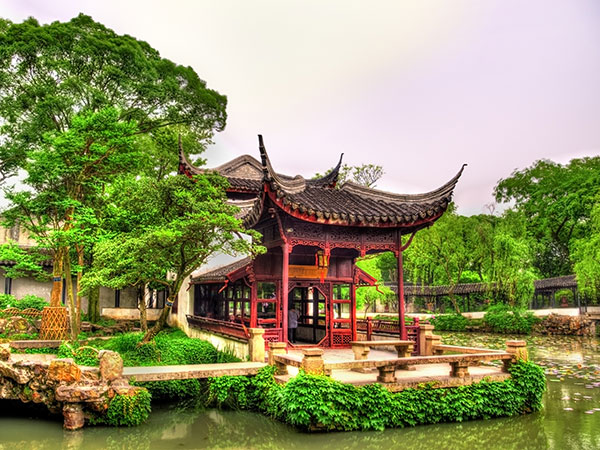 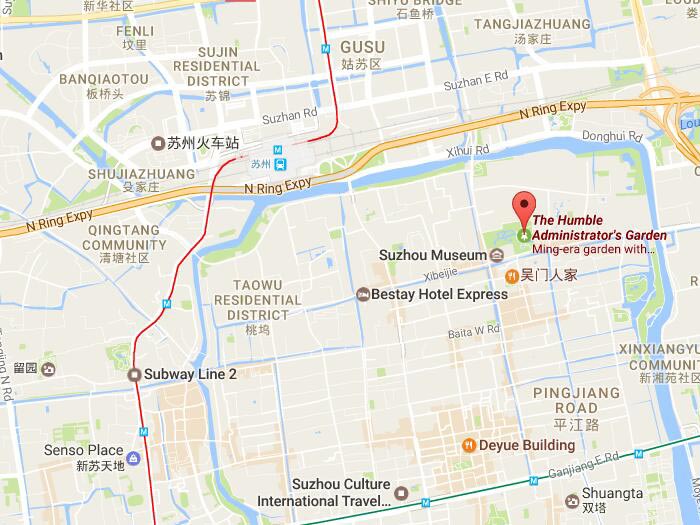 Humble Administrator Garden was first built in the fourth year of the reign of Emperor Zhengde of Ming Dynasty in 1509, with a history of over 500 years. The garden is located in the northeastern corner of the ancient city Suzhou (No.178, Northeast Street). It is one of the representative works of classical gardens in south are of the Yangtze River of China. Humble Administrator Garden was listed as National Key Cultural Relics Protection Unit by the State Council in 1961, known as “Four Famous Gardens” in China, together with the Beijing Summer Palace, Chengde Mountain Resort and Suzhou Lingering Garden. With a total area of 51,950 m2, it is the largest garden in Suzhou. And In 1997, Zhuozheng Yuan, along with other classical gardens of Suzhou was proclaimed a UNESCO World Heritage Site. Its design is duplicated in many gardens throughout China, and there is even a replica in the New York Metropolitan Museum. 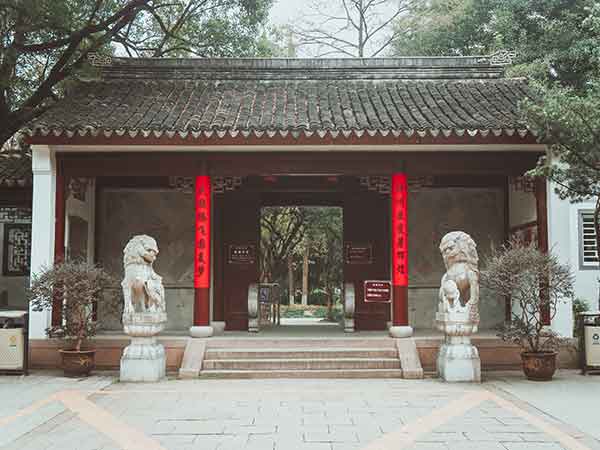 The whole garden is water-centered, with green hills, delicate pavilions and lush flowers and trees, full of poetic and pictorial splendor and rich features of the south of the lower reaches of the Yangze River. The main scenic spots include Distance Fragrance Hall, Fragrance Islet, Lotus-viewing Pavilion, See-the-hill Building and Pipa Garden. The houses in the residential area are of the typical Suzhou style and now used as exhibition rooms. The middle section is the gem of the whole garden. Of its area one-third is covered by water. Around the lake are trees and buildings. 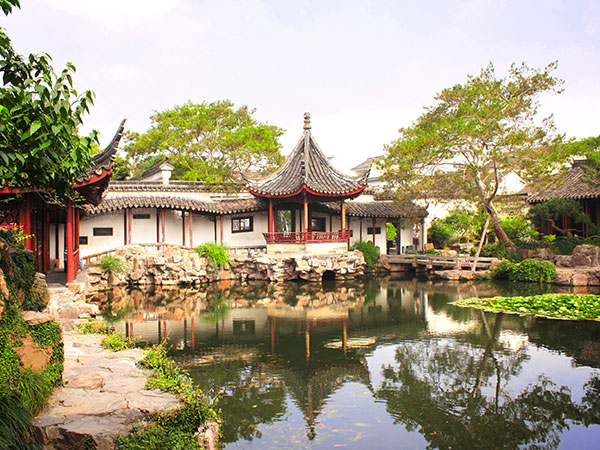 In this well-preserved private garden, one will enjoy the original and ingenious design as well as the calm mind which deeply hiddens in your mind. It also is a great fun to have a study about the basic factors of Chinese traditional garden including the lakeside rocks, the tower and mansions, winding path and the corridors, etc.

During the reign of Emperor Zhengde (1506-1521), the site was occupied by Dahong Temple. At that time, a censor named Wang Xianchen, an Imperial Envoy and poet of the Ming Dynasty, appropriated the temple and converted it into a private villa. In 1510, he retired to his native home of Suzhou under the occasion of his father's death. He had experienced a tumultuous official life punctuated by various demotions and promotions, and gave up his last official post as magistrate of Yongjia county in Zhejiang province, and began to work on the garden. But the Wang family could not maintain the garden. After the death of Wang Xianchen a few years later, Wang's son lost the garden to pay gambling debts. In the coming centuries the garden repeatedly changed hands and was reconstructed many times by different people. So the garden we see today is far removed from the one enjoyed by Wang Xianchen.

In 1991, it was regarded as National Special Tourist Attraction by the State Planning Commission, the Tourism Bureau and Ministry of Construction.

In 1997, it was approved and included in the “World Heritage List” by the UNESCO.

In 2007, it was approved as one of the first AAAAA-class Tourist Attractions by the National Tourism Administration.

Today's garden mainly consists of three parts: the Central Garden which is properly called Zhuozheng Yuan, the East Garden once called Guitianyuanju (Dwelling Upon Return to the Countryside), and a West Garden formally called the Supplementary Garden. And each has its own unique character.

• East Garden is spaciousness. It is composed of a few buildings around a central great lawn and pond combination. The lawn is ringed by a grove of crape myrtle trees which is an allusion to the Tang Dynasty State Secretariat which was nicknamed the Crape Myrtle Department. Buildings in this part include Millet Fragrance, Heavenly Spring Pavilion, Green-Embracing Pavilion, Lotus Chamber, Cloud-Capped Peak, etc.

• Central Garden is the essence of the whole park and the main attraction of the garden. This section is composed of many scenes arranged around the "Surging Wave" Pond. Within the pond three islands recreate the scenery of the fairy islands of the east sea. The Boat-like Structure, the Prunus Mume Pavilion, the Secluded Pavilion of Phoenix Tree and Bamboo, the Drifting Fragrance Hall, the Pine Wind and Water Pavilion, the Small Flying Rainbow, the Magnolia Hall, the Malus Spring Castle, etc., are the highlights of this part.

• West Garden has exquisite buildings, such as: the Li Pavilion, the Good-For-Both-Families Pavilion, the 36 Pairs of Mandarin Duck Hall, the Floating Green Pavilion, the Stay-and-Listen Parlor, the Inverted Reflection Building, Whom-to-Sit-With Pavilion, the Wavelike Corridor, etc. The buildings, though numerous, do not clutter, small mountains and ponds do not give a cramped impression. This part is only half the size of the central part, and is also mainly dominated by water. The pond runs from north to south, and at the central part rises an islet. Although small, it is planned with meticulous care and precision.

How to Get to Humble Administrator Garden