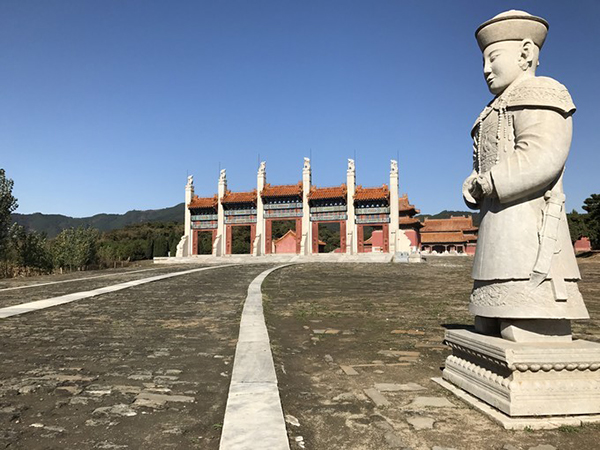 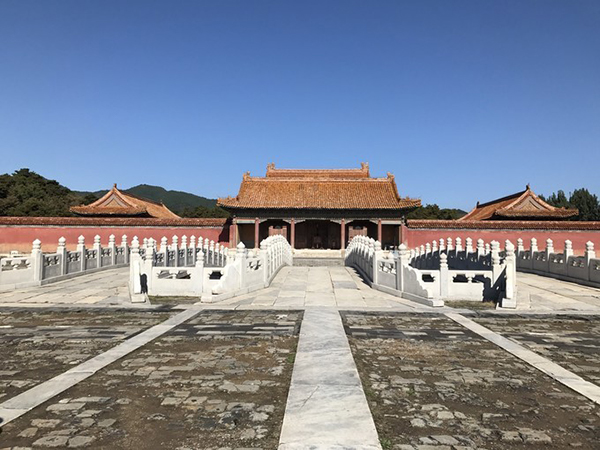 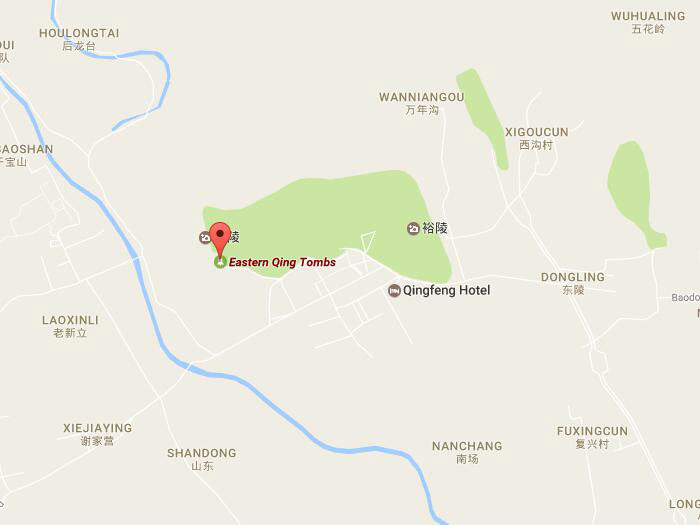 The largest scale the emperor's mausoleum in China.


Eastern Qing Tombs or Qingdongling, located 125 km northwest of Beijing, are among the finest and largest tomb complexes in China. Like the Western Qing Tombs are the sacred burial grounds of Qing emperors, empresses and imperial concubines. Situated to the west of Malanyu Village in Zunhua County, Hebei Province, the entire complex covers an area of 2,500 square kilometers.

A large white marble archway marks the main entrance to the Eastern Qing Tombs. Similar in design to traditional wooden memorial archways (pailou), its rectangular panels are carved with swirling patterns and other geometrical designs. Paired lions and dragons decorate the bases of the standing columns.

After passing through the marble archway, one comes to the Great Red Gate (Dahongmen), which serves as the formal front gate of the entire tomb complex. There is a stela tower containing a large stone tablet mounted on the back of a tortoise-like creature known as a Bixi. This tablet, decorated at its top with carved dragon and bat designs-dragons symbolizing the emperor; bats (fu) as a pun on 'good fortune' - is inscribed with the 'sacred virtues and merits' of Emperor Shunzhi who is buried here.

Heading north after passing a small hill, which acts as a natural protective screen, one comes to a road lined with 18 pairs of stone figures and animals. Somewhat smaller than their counterparts at the Ming tombs, these sculptures include military officers, civil officials as well as lions, camels, elephants and unicorn-like beasts. The road continues through the Dragon and Phoenix Gate and across a seven-arch marble bridge 100 meters long. The longest and finest of nearly 100 arched bridges in the Mausoleum complex, it is called the Five-Tone Bridge after a peculiar acoustical phenomenon: by tapping gently on any one of the more than 110 panels between the bridge balustrades, the five tones of the pentatonic scale can be heard.

On the other side of the bridge is the Gate of Eminent Favor (Long En Men), the entrance to Emperor Shunzhi Xiaoling. At this point, one has covered a total distance of five kilometers from the White Marble Archway introduced above. Just north of the Gate of Eminent Favor is the Hall of Eminent Favor (Long En Dian). This rectangular building rests on a marble platform, which extends to form a terrace in front of the hall, and is surrounded with for storing ancestral tablets and carrying out sacrifices to the ancestors. A stela tower (minglou) stands directly behind the hall. The stela it contains is painted over with cinnabar lacquer and inscribed in Han, Manchu and Mongol scripts with the words' Tomb of Emperor Shunzhi. 'The stela tower is the tallest structure in the entire Mausoleum complex and from here one may obtain a panoramic view of the entire area. The underground tomb of Emperor Shunzhi, who reigned as the first emperor of the Qing Dynasty, has not yet been excavated.

The mausoleums of Emperor Qianlong, called the Yuling, and Empress Dowager Cixi, called the Dingdongling, have been renovated and are open to visitors. The Qing Dynasty attained its greatest power and prosperity during the reign of Qianlong. He was emperor for 60 years (1736-1796), longer than the other nine Qing emperors and for three years served as regent for his son, Emperor Jiaqing. In 1743, after reigning for eight years, Qianlong began directing the construction of his mausoleum at a total cost of 1.8 million taels of silver. The underground palace occupies an area of 327 square meters and consists of three arched chambers. Although it is smaller than the Dingling underground palace at the Ming Tombs, the Yuling Mausoleum houses finer stone engravings and sculptures. A detailed relief of the standing Goddess of Mercy (Guanyin) is carved into each of the eight leaves of the four double doors.

Behind the doors are meticulous carvings of the Four Heavenly Kings in sitting positions, each holding its own characteristic Buddhist icon: pipa (Chinese lute), sword, banner and pagoda. Other bas-reliefs cover the dome and the walls of the mausoleum: the Buddhas of the Five Directions, 24 miscellaneous Buddhas, as well as lotuses and Buddhist scriptures in Sanskirt and Tibetan. These carvings in stone are the finest examples of this genre to be discovered in any tomb to date.

Cixi Hall of Eminent Favor was rebuilt entirely of Phoebe nanmu wood and decorated with gold leaf. Yet since Cixi died before the work was completed, the underground section of the mausoleum remains quite plain compared with the Yuling of Qianlong. This is perhaps compensated for by the fine workmanship displayed in the marble slab set between the staircases in front of the tomb and the balustrades in front of the hall: intricate carvings of lively dragons emerging from the waves and phoenixes hovering beneath the clouds, traditional symbols of the emperor and his empress.

Today, the Hall of Eminent Favor houses an exhibition of Cixi clothing, articles of daily use and a number of other burial relics discovered in the underground palace-painting albums, pillows, quits and her burial garments, including one gown decorated with the word fu (good fortune), another of satin embroidered with the word shou (longevity) and a dragon robe. The treasured 'Dharani' or Sacred Verse quilt woven in pure silk and embroidered with gold thread is also on display. A total of more than 25,000 Chinese characters are embroidered on this three-meter-wide quilt made in Nanjing.

Other minor tombs worth visiting at the Eastern Qing Tombs are the Xiaodongling, the tomb of Shunzhi empress (died 1717); the Changxiling; and the Mudongling. Although these tombs have been excavated in recent years, many artifacts were stolen by Chinese warlords and foreign invaders. For example, in 1928 the warlords Sun Dianying closed the tombs under the pretext of using the grounds for military maneuvers. Actually, he and his troops took this opportunity to open and plunder the tombs of Qianlong and Cixi.

The Zhaoxiling stands alone outside the Great Red Gate. Although Zhaoxi, buried here in 1687, was a mere concubine, she received the title Empress Dowager because she gave birth to the child who later became Emperor Shunzhi. According to the Qing dynastic history, Zhaoxi political influence in the early Qing period also resulted in the selection of her eight-year-old grandson as heir to the throne some 20 years later. When in 1662 this youngest ascended the dragon throne as Emperor Kangxi, Zhaoxi title was raised to that of Grand Empress Dowager.