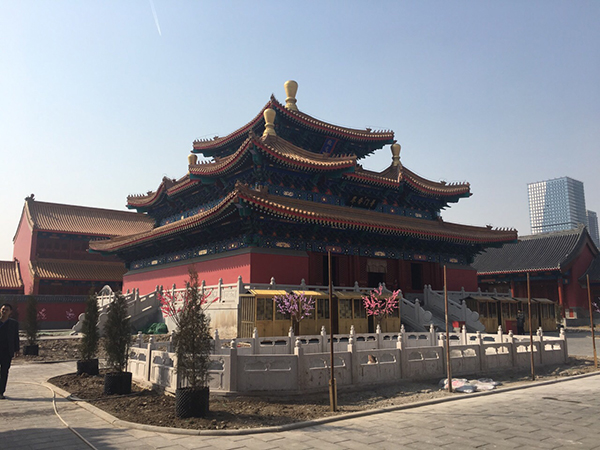 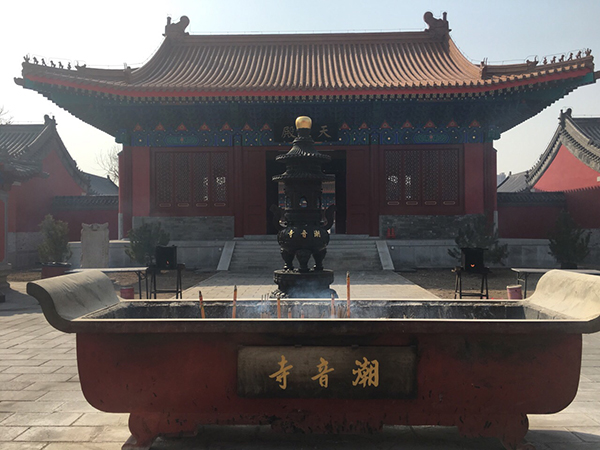 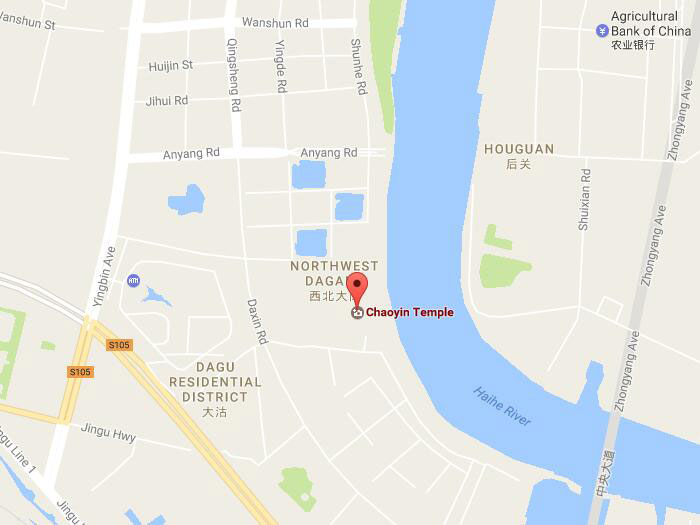 
Chaoyin Temple is located in Xigu on the west bank of Haihe River in Tianjin City. It is sited to the South of Tianjin Economic and Tectnological Development Aera, to the north of Haibin Bathing Beach, to the west of Dagu Fort and the to the east of Jingu Highway. It faces of the Haihe River Mounth at Dagu and is one of the few temples that face east. It is the only cultural relics in the south of Tanggy District in this city that opens to out side world.

Chaoyin Temple is composed of three main halls with four side halls in the north and the south, as well we two courtyards in the north and the south. There is also Liuxian Pavilions and fourteen Buddha Statues including Kuanyin Bodhisattva. It is an approved place for holding Religious Events. It takes the Haihe River and boats as its unique features. Visitors may enjoy themselves by watching the ancient building complex with Ming and Qing Dynasty style and inscribed horizontal tables and antithetical couples which suit both refined and famous tastes.

With special geographical location and a long history, cultural and folk activities are occasionally held here. Sea fishing people have come to burn incense to Buddha, to seek the blessing of the gods. Now it holds every Lunar New Year on February 19 (the Goddess of Mercy Christmas Day), the activities of the temple, the temple held Blessing, calmly walked there Yangko performances. The temple offers special incense, tourist souvenirs and Buddhist supplies. Sincerely, a stick of incense, it wishes your family safe.

The Chaoyin Temple was built in 1404 in Ming Dynasty with a history of six hundred years. It used to be called Nanhaidasi Temple or Shuangshan Temple. It was originally built to raise funds for the construction of the temple by local residents, with the name "South China Sea Odera. Ming Jia Jinghuang, rebuilt, Yubi renamed title plaque "Chaoyin Temple"; Taku crew donated the early years of the Republic, to repair the gates and main halls.

The renowned on Chaoyin Si, in the War of Resistance Against Japanese Aggression and the War of Liberation, unfortunately the shelling. Most of the temple was destroyed. Tremendously popular shijiutuo Island, along with the destruction of Chaoyin Si and off the sound of silence.

During the "Cultural Revolution", Chaoyin Temple again went through a catastrophe. After that, the main hall were removed, only the apse survived.

In February l992, the government reconstructed most of the complex. 5l24-square-meter main hall consists of three layers, the four side hall, a Liuxian Pavilion and campus-wide garden in the north and south, maintained the original style of the Ming and Qing architectural, simple and elegant.