Best Places to visit in Zhangjiajie

What are the Best Places to Visit in Zhangjiajie? Zhangjiajie City is one of the popular tourist cities of China, especially renowned for its grand mountain scenery. Where to visit in Zhangjiajie? Travel with us, you will have chance to experience its unique mountain view in Wulingyuan Scenic Resort. Take a visit to Zhangjiajie National Forest Park or Tianzi Mountain Nature Reserve, you will know, Avatar is far, but Zhangjiajie is near.

Located in the southern n part of the Wulingyuan Scenic Zoon, Zhangjiajie National Forest Park is the first national forest park of China, with a forest coverage rate up to 98%. Renowned for its numerous sheer peaks, clear streams, secluded valleys and primary forest, this park also rich in biology resource, wild animals play freely in the primeval forests. The scenic zone is like a fairy land with the beauty of wild nature. 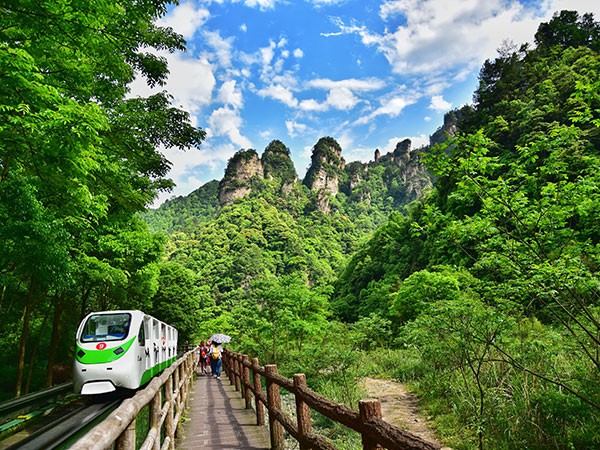 Golden Whip Stream
Located in the east of Zhangjiajie National Forest Park, named after the 380-meter high Golden Whip Rock, Golden Whip stream meanders 5,710 meters. It flows between steep grotesque peaks and luxuriant trees. Here, the meandering streams, the crystal-clear waterfalls, exotic plants and rare animals co-exist and constitute the extraordinarily beautiful, tranquil and natural ecological environment. No wonder it is called "the most beautiful valley in the world" and "the most poetic stream".

Huangshi Village
Huangshi Village, named after a hermit Huangshi, is 1080m above sea level. It is higher on the south and elevated by stiff cliffs, covering an area of 16.5 hectors. It provides the largest collection of marvelous spectacles and also provides the larges sightseeing terrace above sea level in Zhangjiajie. The chief scenic spots include Treasure Box of Heavenly Books, the Magic Sea-suppressing Needle, the South Pillar of Heaven, the Golden Tortoise Watching the Sea and so on.

Tianzi Mountain Nature Reserve enjoys a reputation of “grand potted landscape, mini fairyland”. Its wild primary scenery is the masterpiece of nature. There are four scenic wonders there, namely Cloud Billows, Moon Brightness, Sun Glow and Winter Snow, you would not wanna miss. 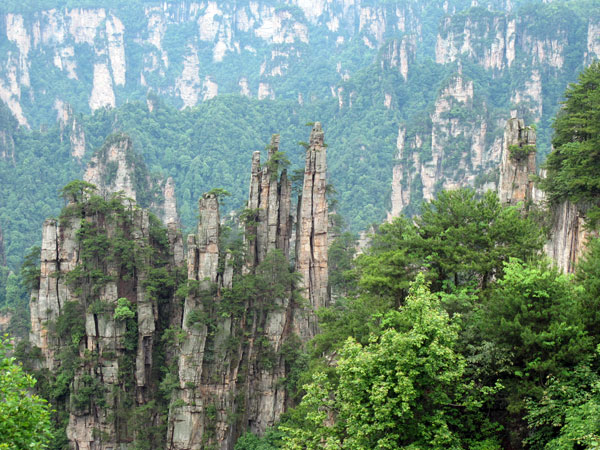 Located in the northwestern part of Wulingyuan Scenic Zone, Tianzi Mountain Nature Reserve boasts rocky peaks in grotesque shapes and shrouded in drifting mist. The highest peak is 1,260 meters (4,130ft) above sea level and provides stunning views of the surrounding mountains and valleys. Waterfalls, bridges, stone forests and caves are found throughout the mountains. There are not just beautiful landscapes, but also simplicity, peculiar folk custom and local folk food of special flavor awaiting the arrival of visitors.

West Sea Stone Forests
Situated in the west of Suoxiyu Valley, it is a basin-like landform with a collection of peaks and woods. In this sea, numerous peaks stand with different shapes and poses, covered with lush vegetation. Therefore, it is called sea of trees and sea of peaks. In spring or summer or a clear day immediately after a rain in autumn, the clouds are surging and rolling like waves, covering the whole sky and earth. The view is so magnificent that it is called sea of clouds.

Shentang Bay (divine shrine)
Shentang Bay is also named Shentang Fort. It is a gorge shaped like a huge basin walled by lofty precipices. The bottom of the gorge is veiled in mists and clouds all day, adding to its mysteriousness. As the saying goes, the most beautiful scene is seen from the most perilous peak. There are almost no roads to Shentang Valley, only a quite dangerous flight of stairs that is as wide as a foot being available. What peculiar is that visitors can hear sounds of gongs and drums, neighs of battle steeds and shouts of men echoing from the bottom. Nobody can give a reasonable answer to this mystery. Therefore, Shentang Valley was a forbidden place in Wulingyuan and a puzzle for hundreds of years. 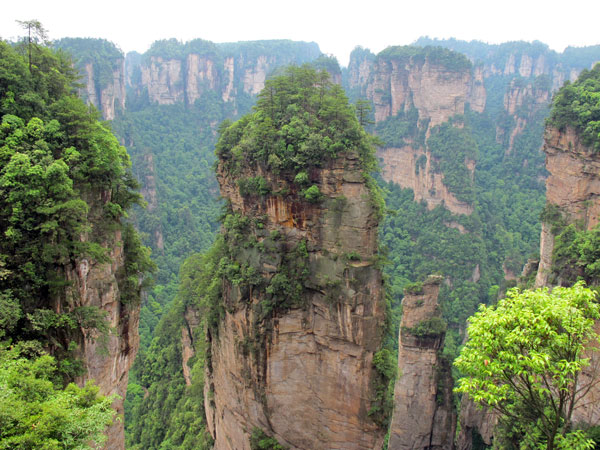 Yangjiajie consists of three parts: Xiangzhi Stream, Longquan Valley and Baihou Valley, in which there are altogether over 200 scenic spots. At Xiangzhi stream, one sees undulating peaks extending into the distance and limpid brooks winding along the deep gullies, and hears birds and cicadas singing in the dusk along the ancient roads, it is a land of peace indeed!