English
Feedbacks & Reviews | About us | Contact us
Home > Destinations > Suzhou

Suzhou is one of the oldest towns in Yangtze Basin. Located by Taihu Lake, the richest area in the Basin, the city has a total area of 6,264 square kilometers.  Meanwhile, bordering Shanghai on the east, Wuxi City on the west and the Yangtze River on the north, Suzhou enjoys great geography and excellent land, water and air transportation. 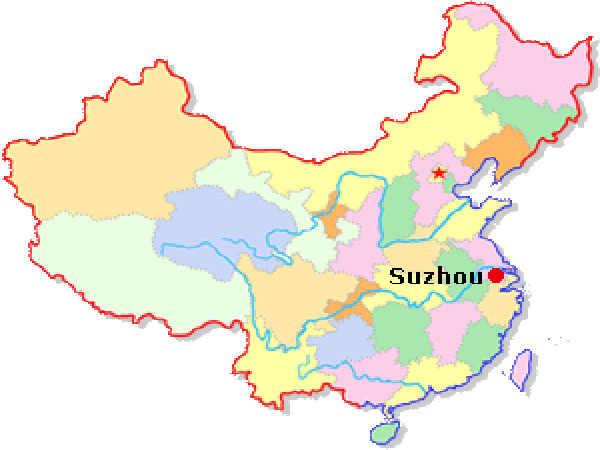 Suzhou achieved its fame 1,000 years later when the Grand Canal was constructed. And the city remains one of the most beautiful cities in China with its blue web of interlocking canals and classical gardens as well as famous silk industry. It is well-known as the capital of silk. The streets and lanes in its downtown area are of the Song-dynasty style.

As the world of garden, Suzhou is also famous for its ancient gardens which are the gem of classical garden architecture in south China and has been included in the UNESCO heritage list. There are millions of visitors coming to the city to admire its beauty. 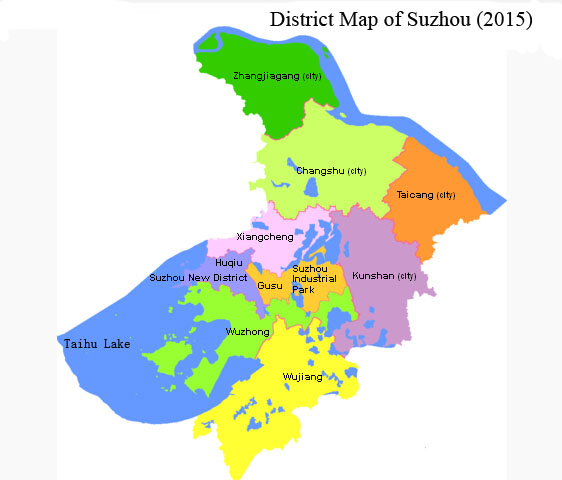 Suzhou, the cradle of Wu Culture, is a city with a history of more than 2,500 years, tracing back to the later Shang Dynasty.

By the Spring and Autumn period of the Zhou, local tribes named the Gou Wu are recorded living in the area which would become the modern city of Suzhou. Suzhou was established towards the end of the Spring and Autumn Period (770-476 BCE), a time of intermittent warfare between the feudal states that then dominated China.

After almost a thousand years of relative obscurity, Suzhou re-entered the annals of Chinese history with the construction of the Grand Canal. The canal was built during the Sui Dynasty (581-618 CE), using compulsory labour. Five million peasants were forced to work on the project; almost three million died, mostly of starvation. When the Grand Canal was completed, Suzhou found itself strategically located on a major trade route. In the course of the history of China, it has been a metropolis of industry and commerce on the southeastern coast of China.

In 486 BCE, Fuchai built the Han Canal, a 185 kilometre connection between the Yangzi and Huai Rivers that was later incorporated into the Grand Canal.

During the Warring States period, the city was known as Wu County. Following the Qin Empire's conquest of the area in 222 BC, it was made the capital of Kuaiji, a commandery named for the reputed resting place of Yu the Great and including lands stretching from the south bank of the Yangtze to the unconquered interior of Minyue in southern Zhejiang.

During the Tang dynasty, the great poet Bai Juyi constructed the Shantang Canal to connect the city with Tiger Hill for tourists.

In February of 1130, the advancing Jin army from the north ransacked the city. This was followed by the Mongol invasion in 1275. In 1356, Suzhou became the capital of Zhang Shicheng, one of the leaders of the Red Turban Rebellion against the Yuan dynasty and the self-proclaimed King of Wu. In 1367, Zhang's Nanjing-based rival Zhu Yuanzhang took the city after a 10-month siege.

Many of the famous private gardens were constructed by the gentry of the Ming and Qing dynasties. However, the city was to see another disaster in 1860 when Taiping soldiers captured the city. In November 1863, the Ever-Victorious Army of Charles Gordon recaptured the city from the Taiping forces. The next crisis was the Japanese invasion in 1937. Many gardens were devastated by the end of the war. In the early 1950s, restoration was done on gardens such as the Humble Administrator's Garden and the Lingering Garden to bring them back to life.

Suzhou Industry Park
The Suzhou Industry Park (SIP) is the largest cooperation project between China and Singapore Government. It is located beside the beautiful Jinji Lake, which lies to the east of Suzhou Old city. On 26th February 1994, Vice Premier Li Lanqing and Senior Minister Lee Kuan Yew represented China and Singapore respectively in signing the Agreement to jointly develop Suzhou Industrial Park. The project officially commenced on 12th May in the same year. SIP has a total jurisdiction area of 288 sq km, of which, the China-Singapore cooperation area covers 80 sq km with a planned residential population of 1.2 million.

Suzhou Hi-Tech Industrial Development Zone
The Suzhou Hi-Tech Industrial Development Zone was established in 1990. In Nov. 1992, the zone was approved to be the national-level hi-tech industrial zone. By the end of 2007, foreign-invested companies had a total registered capital worth of USD 13 billion, of which USD 6.8 billion was paid in. SND hosts now more than 1,500 foreign companies. Some 40 Fortune 500 companies set up 67 projects in the district.

Suzhou is suitable to visit all year around. But the best time to visit is in spring (April to May) and autumn (September to October).

♦ In spring (March to May): everything rouses up from sleeping. You can see beautiful view in classic gardens in Suzhou. If you are lucky enough, you can see the flowers blooming views.

♦ In summer (June to August): summer in Suzhou is hot and humid. It is rainy season, often with typhoon occurring.

♦ In autumn (September to early November): the temperature in autumn is cool. And colorful tree leaves if you travel during this period.

♦ In winter (December to next February): winter is cold and drippy. But if you are lucky enough and it snows when are you there, the snow-covered view is beautiful as well.

♦ In spring and autumn, it is cool and windy, woollen sweater and thick coat is necessary.

♦ Summer is hot. Short T-shirt and pants is enough. Remember to bring sunscreen cream. In addition, from mid-June to mid-July, it rains a lot, please bring your umbrella.

♦ Winter is cold and humid. Down jacket and sweater is necessary.

Most historic sites in Suzhou, especially classical gardens, are scattered near downtown area in Suzhou. In north of Pingjiang District is Humble Administrator's Garden, Lion Grove Garden, Suzhou Museum and Baoen Temple and other famous attractions. Guanqian Street is sited in the busiest area of Old Town and belongs to a must visit place in Suzhou. Shiquan Street, Panmen Gate is sited in the south of the city. Shiquan Street is a famous food street in Suzhou, and the famous Master of Nets Garden and Surging Waves Pavilion is along the street. Tiger Hill is near to Suzhou Train Station. Hanshan Temple is another famous attraction. Zhouzhuang, Tongli, Mudu, Luzhi are famous water towns near to Suzhou.

♦ Humble Administrator Garden - It is the largest renowned Chinese garden in Suzhou. The garden contains numerous pavilions and bridges set among a maze of connected pools and islands. 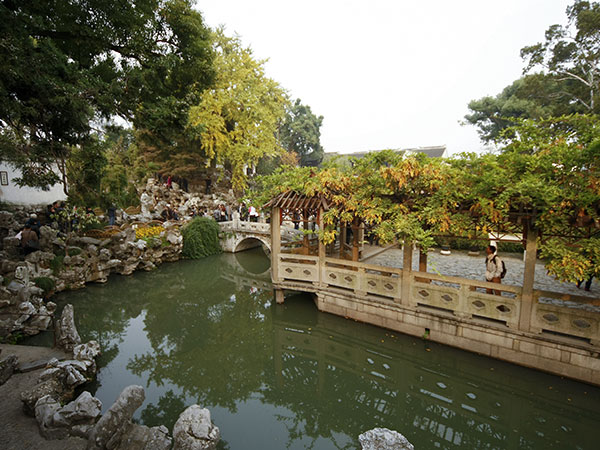 ♦ Tiger Hill - known for its natural beauty as well as historical sites. It is so named because it is said to look like a crouching tiger. Its features include: Sword-Testing Rock,Yunyan Pagoda, Sword Pond (Jianchi), Lu Yu Well, Thousand People Rock, etc. 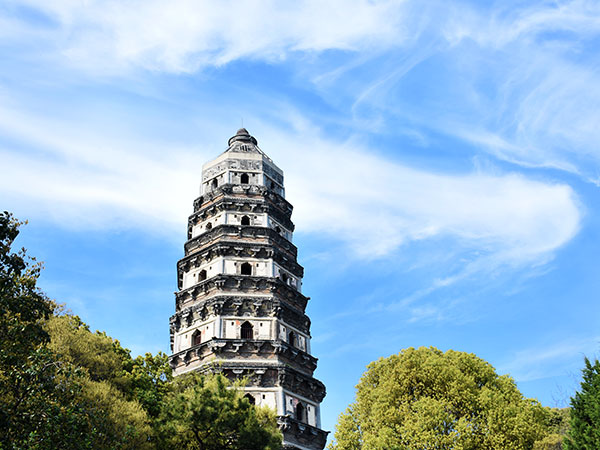 ♦ Lion Grove Garden – it is one of famous classic gardens in Suzhou and is famous for the large and labyrinthine grotto of taihu rocks at its center. The name of the garden is derived from the shape of these rocks, which are said to resemble lions. 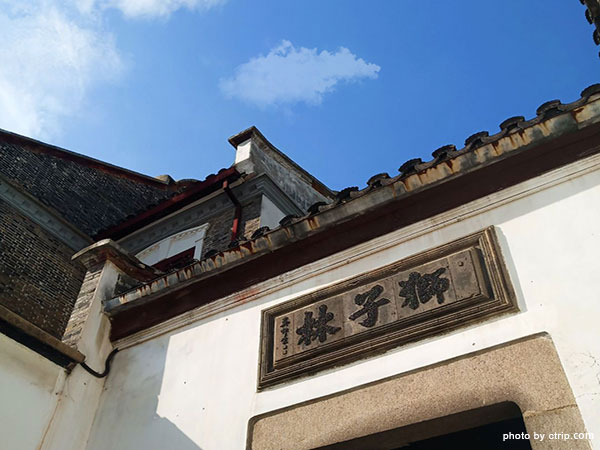 ♦ Lingering Garden – It is also a renowned classical Chinese garden. It consists of four distinctly themed sections; East, Central, West, and North. The Central area is the oldest part of the garden. Buildings, the primary feature of any Chinese garden. The eastern section of the garden is arrayed around the cloud-capped peak stone. A central courtyard is ringing by buildings. Behind the Old Hermit Scholars' House is the Small Court of Stone Forest, a collection of Scholar stones and connected minor courtyards. The western section is mostly natural containing only a few pavilions, a large artificial hill, and a Penzai garden. 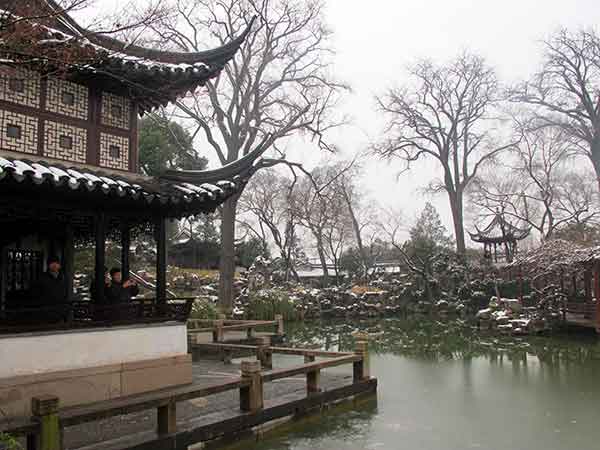 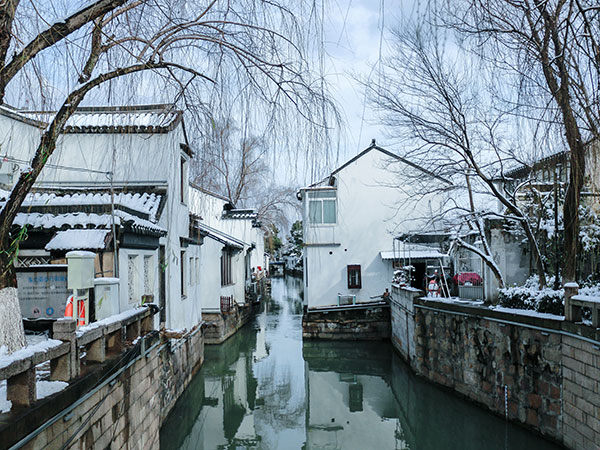 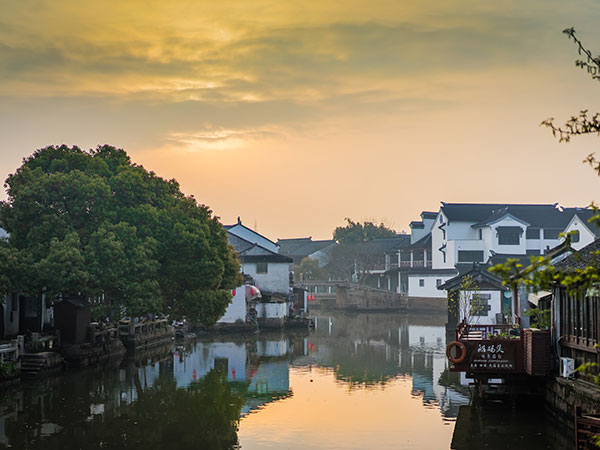 You may viist more about Shopping  in Suzhou at Suzhou Shopping

Transportation in Suzhou is quite convenient: by bus or by train.

Suzhou does not have any Civil Airport itself. If you are arriving by air, you have to travel via Shanghai Hongqiao Airport, Shanghai Pudong Airport, or Wuxi Shuofang Airport (Sunan Airport). There are many shuttle buses traveling between the two airports in Shanghai and Suzhou. It will definitely not affect your travel itinerary. But shuttle buses between Suzhou and Wuxi Shuofang Airport are quite limited and the schedule is changeable. Your need to call to consult the schedule first.

Shanghai Pudong International Airport is about 150 km away from Suzhou. Upon your arrival, you can transfer to a airport bus or train to get to Suzhou. It takes 3 hours by the airport bus. If you choose to take train, you need to get to Hongqiao Railway Station first, then take the high-speed train or bullet train to Suzhou (30 minutes). Airport to Hongqiao train station by metro, 1.5 hour.

Shanghai Hongqiao Airport is about 100 km away from Suzhou city. From Hongqiao Airport to Suzhou, you can take the bus or train. By train for about 30 minutes; by bus forabout 1.5 hours. You all need to take subway to the bus station or train station for the transfer.

Wuxi Shuofang Airport is about 36 kilometers away from Suzhou City. the way to Suzhou is also by buses or trains. There are only six buses to Suzhou. Trains from Wuxi to Suzhou is quite a lot.

Suzhou Railway Station
Located in the center area of the city. Almost all of Beijing-Shanghai trains pass through the train station. The trains from Suzhou to Shanghai departs every 20 minutes or so.
♦ Add: 27 Suzhan Road, Gusu District, Suzhou
♦ Tel: 0512-67513131
♦ How to get: take taxi or public bus

Suzhou North Railway Station
It is one of station along Shanghai-Beijing High-speed Rail. All the high-speed train or bullet trains along the rail will pass through this station. But it is kind of far from downtown, taking more than an hour by bus
♦ Add: Fulin Road, Xiaongcheng District, Suzhou

Suzhou North Bus Station
Located in the downtown, near the Suzhou Railway Station. It is responsible for the long-distance passenger transport of Suzhou to various provinces and cities, as well as the surrounding short-distance passenger transport in Jiangsu Province. In addition, it is the station that has the most buses to Shanghai.
♦ Add: 29 Xihui Road
♦ Tel: 0512-67530686
♦ How to get: take taxi or public bus to get there.

Wuzhong District Bus Station
There are some distance to get to the downtown. There are some Tourist Express Buses leaving for Wuzhi, Tongli, Zhouzhuang, as well as a few bus to Zhejiang and Shanghai.
♦ Add: 10 Guangjian Road, Wuzhou District.