Famous Landmarks in Guangzhou are considered the Name Card of this city, which can be grand architectures and graceful national scenery, etc. Like Dr. Sun Yat-sen Memorial Hall, Canton Tower and Pearl River, each of them is somehow, represented a certain character or role Guangzhou played to the world. Come with TopChinaTravel, to witness and appreciate those famous Guangzhou Landmarks.

Stone Sculpture of Five Rams
The Stone Sculpture of Five Rams is considerred the symbol of Guangzhou City. It is placed on the Muke Hillock of Yuexiu Park. With a height of 11 meters, this sculpture was carved out of 130 small marble pieces in 1960. This stone carving features 4 baby goats in different shapes that crowed round the nanny goat that held a bunch of wheat. It is actually depicts the Chinese legend of how creatures from Heaven rode into the city of Guangzhou riding rams and carrying rice. The story is interpreted to mean that rich Guangzhou will never suffer from famine. 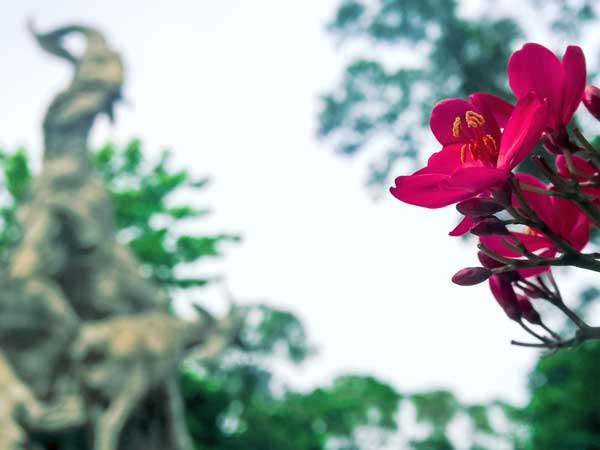 Yuexiu Park, originally was Yuexiu Hill, is the largest park in Guangzhou City with an area of 920,000 square meters. Inside the park, there are luxuriant trees and colorful flowers. In the park, visitors can find a large stadium, which can hold more than 30,000 audiences, the Stone Sculpture of Five Rams which is the symbol of Guangzhou City, Zhenhai Tower, Sun Yat-sen Memorial Hall and the ancient city walls built in the Ming Dynasty.

Canton Tower
Canton Tower, formally known as Guangzhou TV astronomical and Sightseeing Tower, is the unmistakably architectural landmark of Guangzhou City, which stood in Zhuhai District. It is a grand structure with a total height of 600 meters. In 2009, it was shortly became the tallest completed tower in the world, which replaced the CN TV Tower of Canada. But in 2011, this record was broke by the Tokyo Sky Tree. It still remains the title of the tallest building in China. It is also the 4th tallest freestanding structure in the world. 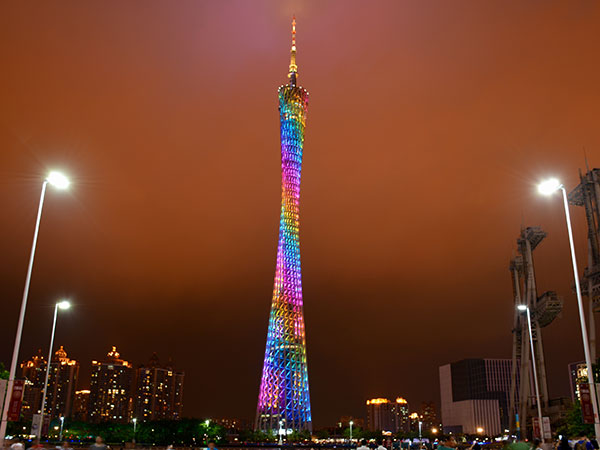 The tower was designed by Information Based Architecture and Arup. The main load carrying elements of the tower's structural lattice are its steel columns which taper as they climb and twist up the building. Infilled with concrete, these are 1.8m in diameter at the bottom reducing to 800mm at the top. Horizontal rings of steel attached inside the columns keep these in the right position and help balance the forces created by the fact that they effectively slope. Diagonal members then give the structure added rigidity.


Dr. Sun Yat-sen’s Memorial Hall
The Dr. Sun Yat-sen Memorial Hall is an octagon-shaped building located in the original site of Sun Yat-sen's Presidential Office on the south slope of Yuexiu Hill. It was built in 1931 with the funds raised by the Guangzhou people and overseas Chinese in memory of Dr. Sun Yat-sen, the pioneer of China's bourgeois democratic revolution. 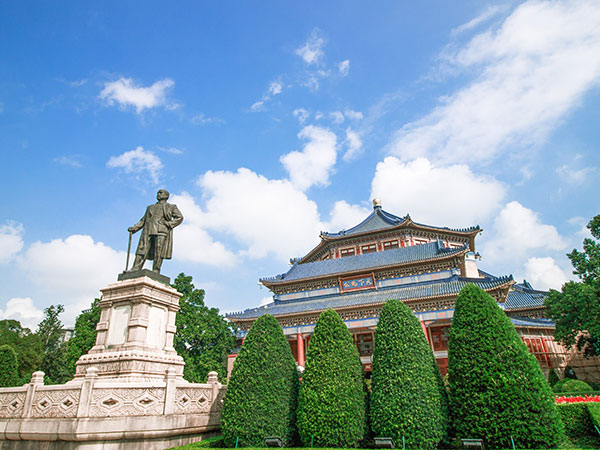 Dr. Sun Yatsen, the founder of Guomintang which over threw the Qing monarchy, made Guangzhou his headquarters during the 1920's. In 1931, the Dr. Sun Yat-sen’s Memorial Hall was built in Guangzhou. Constructed in traditional Chinese style with an octagonal shape, the hall remains an important meeting place. A bronze statue of Dr. Sun was placed in front of the hall in 1956 after the Communists came to power. The building today in many ways symbolizes the city, and has become a key venue for the city's large-scale meetings and performances.
Temple of Chen Family
Temple of Chen Family, or Chen Clan Academy, is the largest, best preserved, and best decorated ancient architecture existing in Guangdong province. Located in downtown Guangzhou , this family temple was built between 1890 and 1894 during the late Qing dynasty. It consists of two main courtyards. The front one was used for study of the Confucian classics while the back one housed a temple to the ancestors of the Chen clan. In 1986, it was designated as an important cultural relic by the State Council. 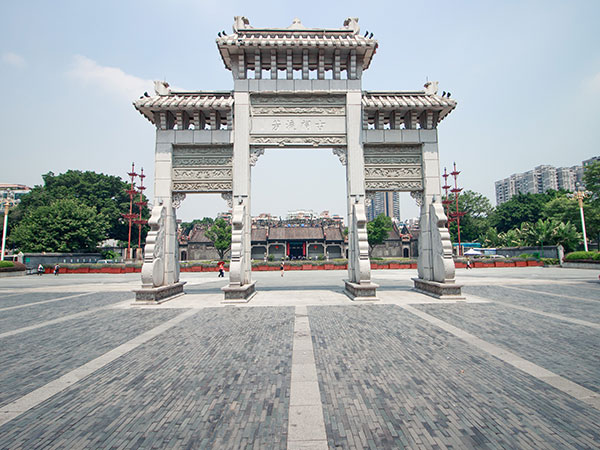 Originally, it was built for the Chen clans for their juniors' accommodation and preparation for the imperial examinations. Later it was changed to be the Chen Clan’s Industry College, and then middle schools afterward. The temple is now the site of the Museum of Guangdong Folk Arts and Crafts. The scenes depict stories from Chinese literature and folklore and include real and mythical animals.

Pearl River
Pearl River, or the Canton River in ancient time, is an extensive river system in south China, and the third longest river in China with a length of 2,197 kilometers, only after the Yangtze River and the Yellow River. 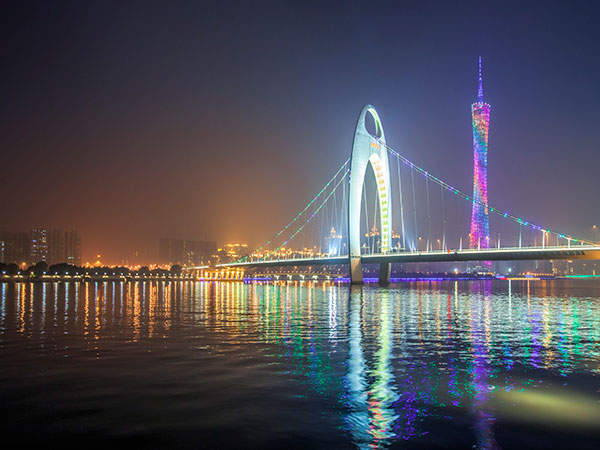 Originally, the Pearl River indicates the section running from Guangzhou to the inlet of the South China Sea. The name now indicates an extensive river system in southern China area, which including West River, North River, East River and rivers of the Pearl River Delta. The annual rainfall of the region is around 1,000 mm, thus Pearl River enjoys about 336 billion cubic meters total flow a year.


White Cloud Mountain
White Cloud Mountain, or Baiyun Mountain Scenic Spot, is one of the top ranked tourist attractions in Guangzhou. Located a few miles north of Guangzhou City, it scenic spot covers a total area of 28 square kilometers. Famous for its veil-like clouds rising during the late spring and autumn, the White Cloud Mountain can be divided into six parts with famous tourist spots of each. 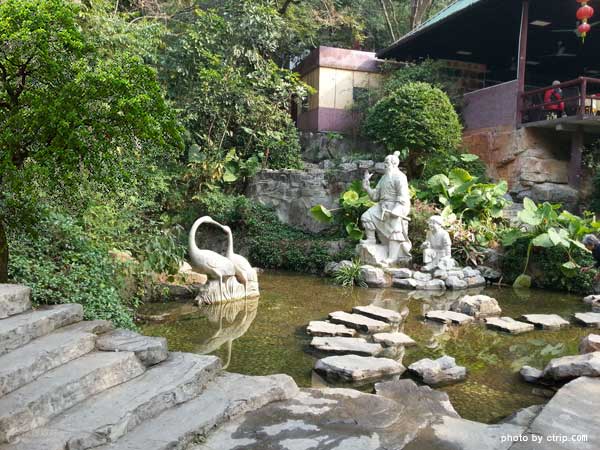 The whole scenic spot consists of more than 30 peaks, among which the Moxing peak is the tallest with the height of 382 meters. Ascending the peak, you'll have a wonderful bird view of the city and meandering Pearl River. The scenery is magnificent. Leaving for the mountain in the early morning is a good choice. Beside the silence and peace, you also can enjoy the fresh morning air.
More famous attractions in Guangzhou please click Guangzhou Attractions