Traditional Chinese Painting, developed from paintings in silk in past 2000 years ago, is famous for its original style and distinctive national features in the world. Over the centuries, the practice of countless artists made it an art subdivided into a multitude of schools with some traits in common.

Traditional Chinese painting focuses not only on skills of painting but also on cultivating one's character and nurturing the soul. Humans, landscapes, flowers and birds are top four subjects for traditional Chinese painting. The ancient painting masters created a wealth of masterpieces based on different painting skills and artistic thoughts, which reveal the ancients’ knowledge on philosophy, politics, religion, literature and art,society and nature. 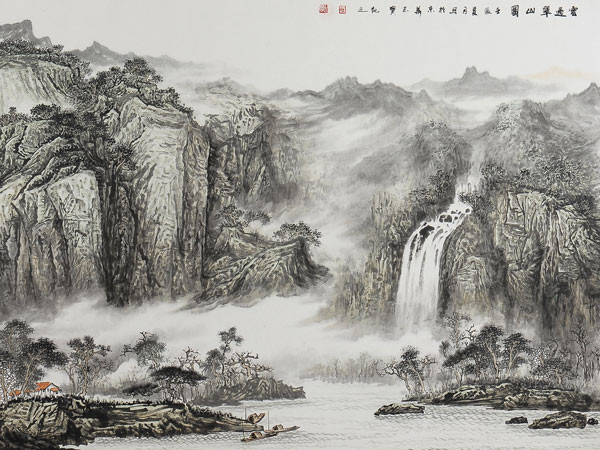 The origin and early ages

Chinese painting originates from the ancient pictographic characters. Some people think that Fuxi (伏羲, one of the Three Legendary Sovereigns of ancient ages) painted hexagrams, while Cangjie (仓颉) created Chinese characters, which was the beginning of Chinese painting and calligraphy.

In the neolithic age, pottery was created and showed evidence of early Chinese painting . On the unearthed painted pottery from xi 'an banpo village, an important site of neolithic age, we find painted fish chasing each other and painted deer jumping happily. On the colored pottery basin excavated from Sunjiazhai, Qinghai Province, we see a picture of three groups of five people hand in hand singing and dancing. They are the prime sources to study traditional Chinese painting.
China’s earliest bronze wares were discovered in the cultural sites of Xindian and Longshan in the late neolithic age. They were artifacts, and also ancient Chinese arts and crafts. The decorative paintings on the bronze wares can be divided into two categories, paintings of nobles’ daily activities and ceremonies, such as luxury banquet, archery, sacrificial ceremony, etc, and paintings of wars. Yanyue Copper Pot kept in the Palace Mueseum has pictures of ancient war. The artistic techniques shown on the bronze ware paintings had inspired and greatly influenced the stone carving and brick carving of Han Dynasty. 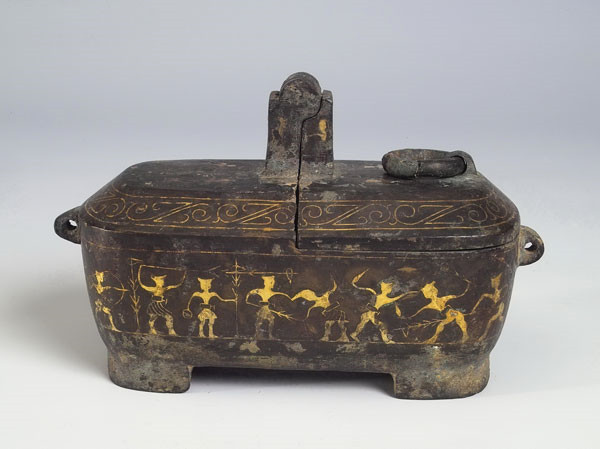 The development and heyday

Yulong Painting (御龙图), the most renowned painting of The Spring and Autumn Period and The Warring States Period (770BC - 221BC) was drawn on silk. Early paintings had laid the foundation of traditional Chinese painting - the lines were the basis of drawing modeling. Later in Han Dynasty and Wei Jin dynasties (202BC - 420D), the collision and fusion of the input and native culture made religion the main theme of Chinese painting. Landscape painting and flower-and-bird painting also sprouted at this time. Traditional Chinese painting kept on developing during the Sui and Tang dynasties (581 - 907), when China was at the height of economic prosperity and culture development. Landscape painting, flower-and-bird painting had matured. Chinese painting reached its peak during Yuan, Ming and Qing dynasties (1271 - 1912), literati paintings and genre painting gradually became the mainsteam. A multitude of painters sprang up. They enjoyed the life and loved the arts, and created numerous high-quality paintings. 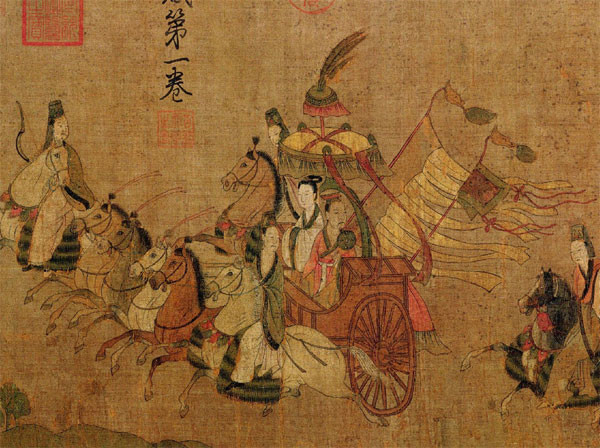 The main schools of Chinese painting

In terms of mode of expression, traditional Chinese painting mainly falls into two schools. The Xieyi School, literally 'painting the feeling', marked by exaggeration of form and liberal use of ink; another school called Gongbi, means meticulous brushwork, characterized by strict and detailed representation of the subject.

while in terms of subject and theme, traditional Chinese paintings are classified into three main categories: the figure painting, landscape painting and flower-and-bird painting. To appreciate landscape painting,one needs to understand the painter’s feelings, thoughts and ambitions, as he/she combined personal emotion with nature, rivers, mountains and little trees.

In the early ages, the patterns of flowers, birds and some animals frequently used on the potteries and bronze wares had a peculiar mystical significance - to worship the gods and sovereigns. The first high-quality flower-and-bird paintings with independent spirits emerged in Wei and Jin dynasties, and demonstrated unique aesthetics and superb painting skills. 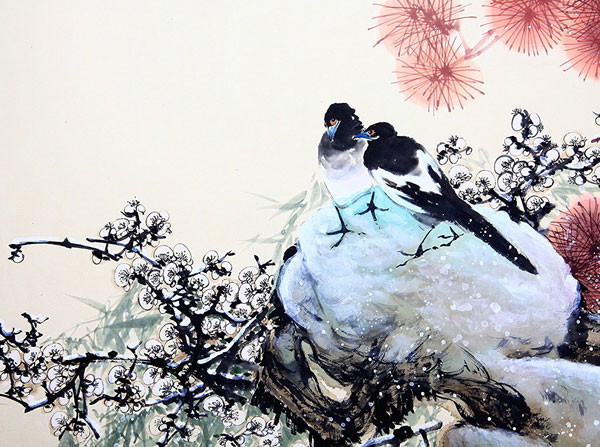 
As to the subject, the most popular ones have been landscapes, human figures, animals, fishes, birds and flowers. Hence, there are 'figure painting', 'flower and bird painting' and 'mountain and river painting'.
Symbolism in Chinese painting


The interesting thing is the symbolism used in the painting that often puzzles the westerners' eye. Mountains, rivers, plants, animals, birds, flowers, etc., can all be chosen for their traditional association as much as for their inherent beauty.
In Chinese people’s minds, the plum of blossom, orchid, bamboo, and chrysanthemum are known as four gentlemen in Chinese classic literature. They are not only four plants, but also present the four seasons and the personality and conduct Chinese people appreciate with. The plum of blossom, stands for bravery and the messenger of spring, the symbol of grace and nobility in Chinese culture; orchid, a modest flower, stands as the symbol of secluded charm because it is often found in a deserted shady valley; bamboo symbolizes integrity and simplicity; chrysanthemum, for elegance, righteousness and longevity. Besides, there are another three kinds of plants are used as themes of Chinese painting, they are: pine tree, peony and lotus. The pine tree stands for the uprightness and immortality. The peony presents wealthy and honors. The lotus, coming out of the mire without being smeared, stands for kindness, harmony, purity and both the blooming lotus and the luxuriant lotus leaves symbolize prosperity and continuity.

Gu Kaizhi (顾恺之) - An outstanding calligrapher and painter in East Jin Dnasty, he was good at figure painting, animal painting and landscape painting, with representative works like Ode to the Goddess of the Luo River Painting (洛神赋图) and Admonitions Scroll (女史箴图).

Yan Liben (阎立本) - Another master of traditional Chinese painting, Yan Liben was born in a family of painters and roamed widely in painting and calligraphy. His representative works are Thirteen Portraits for Emperors (历代帝王图) and Bunian Tu (步辇图)

Wu Daozi (吴道子) - He is known as the Sage Wu in Chinese painting history, with representative works like Born of Gautama Buddha (天王送子图) and Portrait of Confucius When Teaching (孔子行教像).

Li Gonglin (李公麟) - He was especially good at painting horses.

Shen Zhou (沈周) - One of the outstanding painters in Ming Dynasty, he was of great learning in literature, poetry and painting.

Zheng Banqiao (郑板桥) - A famous painter in Qing Dynasty, he was skilled in drawing plants like orchids, bamboo, chrysanthemum and pine. 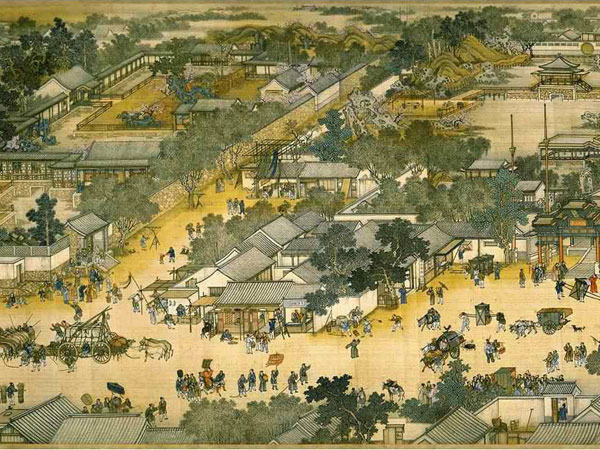