The travel and tourism industry is one of china’s well-performing industries with a total economic contribution (direct, indirect and induced) of over 120 billion U.S. dollars in 2016, accounting up to more than 10% of GDP, according to China National Tourism Administration. According to the report of tourism suggestion from state council in August 2014, by 2020 China tourism industry would have the estimated revenue of 5.5 trillion Chinese yuan.

At present, domestic tourism is still the main force of driving china’s tourism industry growth. In 2015, domestic travel customers had increased up to 4 billion Chinese yuan, which was around 603 million US dollars (according to the exchange rate during November, 2017), becoming the largest domestic tourism market on the global level. The international inbound traveller or foreigner entry travel business number has gone up to 133 million people and the Chinese outbound traveller to other countries is 120 million people. The direct employee within tourism industry in Chinese is 24.98 million and the indirect jobs provided by tourism industry is much higher number with a total account of 79.11 million people. The total population that involved in Chinese tourism industry accounts up to 10.2% of the whole Chinese population. (The statistics in this paragraph are all up to 2015) 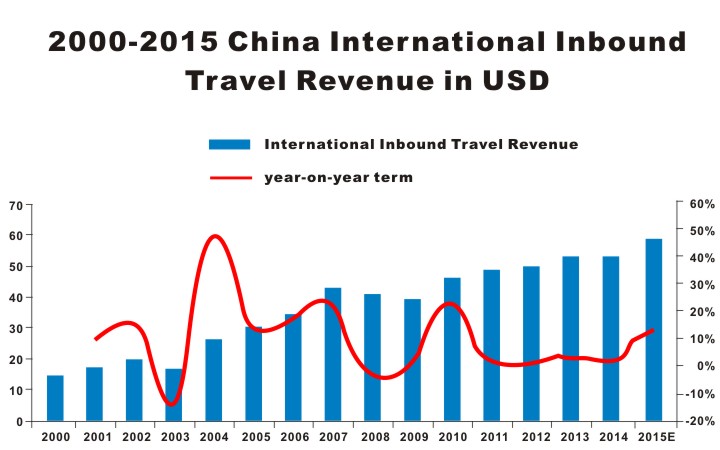 If we analysis the statistics in the aspect of expenditure of all international inbound tourists in china, 70% travelers’ total expenditure in their China trip are between 500-3000 USD with the transportation cost making the most costly section in their China trips. Unlike Chinese travelers aboard whose luxury goods shopping expenditure making the most costly section in their travel bills, foreigners come to china are more keen on scenic and culture site-seeing. From 1th July, 2016, Beijing has released the departure tax refund policy to encourage tourists to purchase more valuable goods or souvenirs during their china trips.

In the aspect of outbound tourism business, China now has become the most fast-growing and biggest outbound travel producing country in the world. In 2015, the total Chinese outbound traveller number has gone up to 120 million. This is mainly because recently years under the open and reform policy of china government, the wealth level of Chinese people has been lifted a lot. 60% of outbound Chinese travellers travel overseas for leisure and 20% for adventure.Below is the chart that shows the detailed statistics about 2001-2015 Chinese Outbound Visitors in Million with the numbers summarized and designed by chyxx.com. 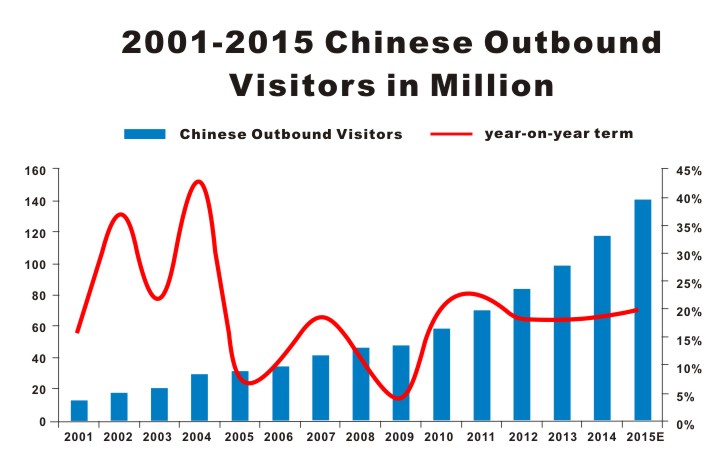 By 2015, the top ten outbound destinations of Chinese oversea travellers are Korea, Taiwan, Japan, Hong Kong, Thailand, France, Italy, Switzerland, Macao and Germany. Among them, Japan, Korea, Thailand has attracted nearly 70% of all the outbound travellers of China.

Competition within travel agencies sometimes leads to price competition. Many on line travel agencies may attract tourists at a rather “competitive” low quotation, yet they will not fully provide the quality service they have promised or make up benefit by force shopping.

Therefore, when you choose Chinese travel agency, you shall be aware of those low budget tours from unknown agencies and remember that top china travel with Over 50 years of professional service could always be your best choice!