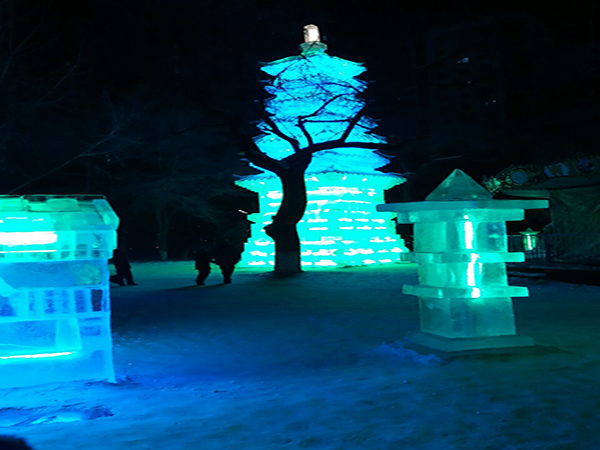 The largest outdoor ice lantern show in the world.

The modern ice lantern art of Harbin originated from the beginning of 60s in the19th century. This kind of art is developed from the traditional simple folk art style. It makes use of the expression of architecture and sculpture, on garden art basis, and adopts electricity as the light source to make fantastic ice view. During the second half of the 19th century, ice lantern fair gradually developed into a representative event of Harbin ice & snow culture and art. In order to carry forward and develop the art of Harbin ice lantern, the local government held the first Harbin Ice Lantern Show in Zhaolin Park in 1963. Since then, it has become the showplace of ice lantern art every year. It attracts a large number of domestic and oversea visitors for a visit during every Harbin ice & snow festival.

【Chinese name】： 兆麟公园【Best time to visit】: from January 5th to the end of February. Ice Lantern Fair is only available to be seen during this time period.
【How to get there】: you may take Public Bus 16, 23, 64, 83, 94, etc. to get off at San Dao Jie Station. Taking a taxi would be the most convenient way. You may show its Chinese兆麟公园 to the the driver, and he will take you there.