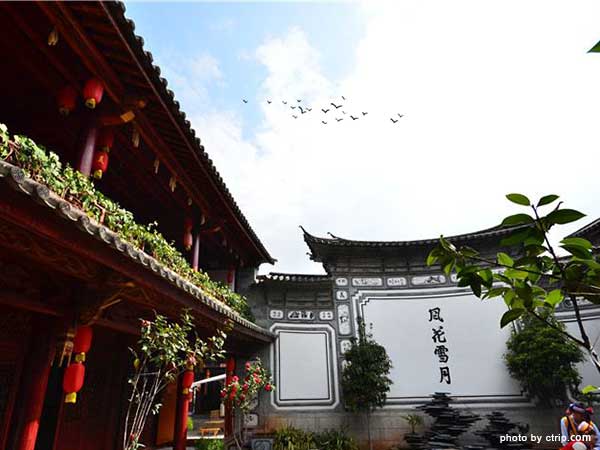 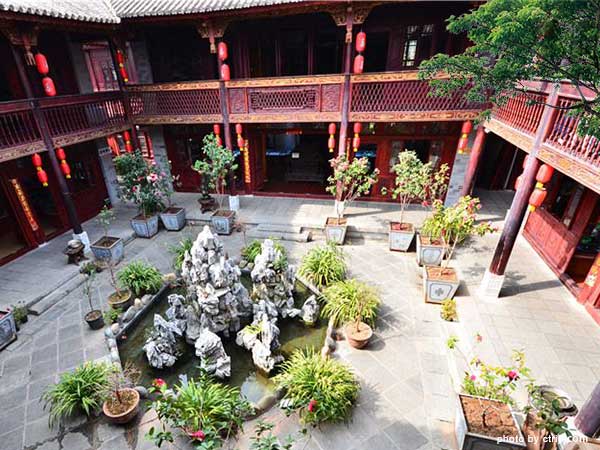 The history of Xizhou can be dated back to the Sui Dynasty (581-618 AD). At that time, it was called the city of Dali. It was later conquered by General Shi Wansui, so it also enjoys the name of Shicheng (Shi City).

People nowadays regard Xizhou as a town that is famous for the Bai minority culture. The old houses and streets are well preserved, through which visitors may still find some traces of past glory.

At the entrance to Xizhou, a magnificent structure catches the attention of visitors. It is a two-storey building made of wood and brick. The second floor is an attic of horizontal inscribed board. The first floor is a corridor, leading people into the history.

Not far away is a banyan tree with flourishing leaves and branches. Perched on the tree is a large flock of egrets. They lead a comfortable and luxurious life without disturbance. People may have their doubts about whether the banyan tree and egrets are sacred things worshipped by the locals from generation to generation. All the same, such a seamless and harmonious relationship between human beings and nature really is a great attraction.

Walking along the slate road, sauntering though the winding alleys, visitors can have a good look at the delicate and intricate designs on the walls.

The houses of local residents are characterized by a traditional Chinese rectangular courtyard with a screen wall facing the gate. On the screen wall there are usually four Chinese characters, reading 'Qingbai Shijia' (innocent family) or 'Ziqi Donglai' (Auspicious air comes from the East). Around them are landscape paintings and decorations with profusion of colors. The doors and windows are full of grills with auspicious paintings.

In Xizhou, visitors also have the opportunity to appreciate the genuine tea ceremony of the Bai minority. Sandao Tea is a must-drink. It consists of bitter tea, sweet tea and aftertaste tea, indicating the whole life of the people.

Xizhou is located 20 km north of Dali old town and about 35 km from Dali new city, Xiaguan. It is located on a fertile plateau between the Mt. Cangshan range to the west and Erhai Lake to the east at an elevation of 2000 meters.

Xizhou has a history of more than one thousand years, which was one of the remained ancient towns. During Nanzhao period, the city building was grand, ranked only second to Taihe City and Yangqiemie City, and it was the military and commercial trade hub. According to legend, Nanzhao king and their family, often leave the king and stay here. Xizhou is one of the cradles of Dali culture, as early as Liuzhao and Heman coexisting time, Xizhou was already Bai inhabited region, which belonged to the Dali Heman. In Sui dynasty, Shiwansui once stationed troops in this place, so called "Shi City"; in Tang dynasty Nanzhao king built his palace here, and it was called Dali City at that time. Most of Dali of businessmen came from Xizhou, so-called Xizhou group, mainly engaged in medicinal materials, clothes and tea. Xizhou is a historic city, a typical commercial town of Bai nationality, is also one of the Bai national capitalism origin place, and one of the famous overseas Chinese hometown in Yunnan.

【Seven Feet Study Building （七尺书楼）】
Seven Feet Study Building is located in Xizhou Ancient Town Dajie Lane No.8, Dali Yunnan, where was a famous literati Yang Shiyun in Ming dynasty established around 1526 AD. The building is civil engineering structure, there are three big rooms. The rooms face to the east, all three are divided into two floors of upstairs and downstairs, doors and windows are carved with elegant design. Wealthier homes will often designate one wall to be a reflecting wall while the other three serve as living spaces (三坊一照壁). Seven Feet Study Building was repaired in Qing Qianlong years and years of the republic of China has repeatedly, but the whole building still preserved in the Ming dynasty architectural style.

Yang Shiyun did not seek fame and wealth, he thought that wealthy person who even tie myriads of strings of cash around the waist, only stayed in that seven feet grave after the death. So the posterity called the house he lived in "Seven Feet Study Building". After Yang Shiyun died, his thereafter successively repaired it repeatedly in Qing dynasty Qianlong years and years of the republic of China. And it is very famous in Dali spots in Yunnan.

Taking midi bus from ancient city or Xiaguan to Xizhou, people can hail the bus along the Yunnan-Tibet Highway. From Xiaguan to Xizhou, there are 30 minutes. Xizhou is a short bus ride from Dali's old town, accessible by buses from both the 214 highway and the Dali-Lijiang road (大丽路). Xizhou is small enough to walk through its entirety in a few minutes, but horse carts and bicycles are a popular mode of transportation. People can turn back in a day, but also can stay overnight in Xizhou and take part in the local evening party. And people can pay visit to Butterfly Spring and Zhoucheng city around.

【Chinese Name】: 喜洲白族民居
【Recommended Visiting Hours】: 4 to 5 hours
【Best Time to Travel Xizhou】: from March to May is the best time to visit Xizhou Ancient Town. There are many festivals and events of Bai nationality in March to April every year, traveling during time tourists can appreciate full-bodied ethnic customs.