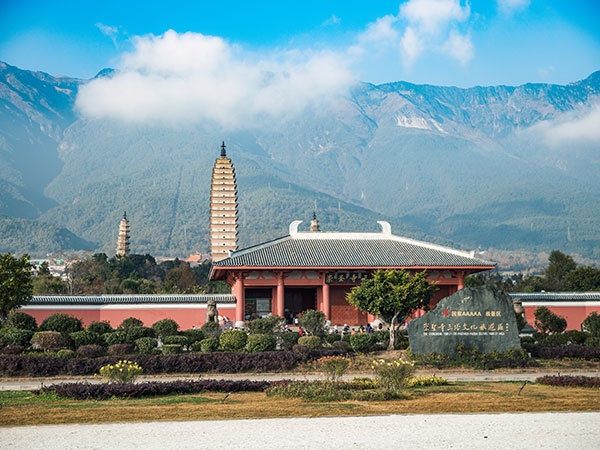 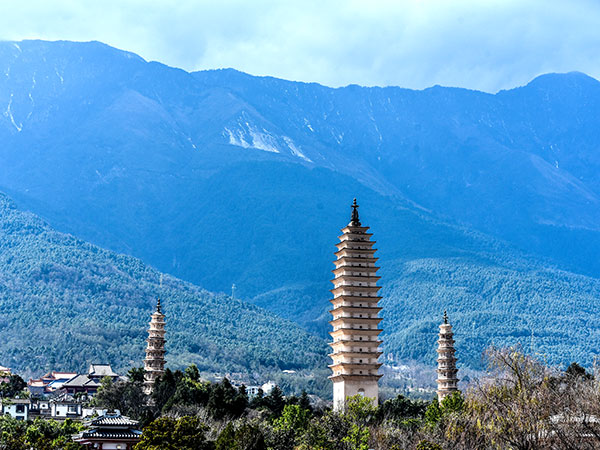 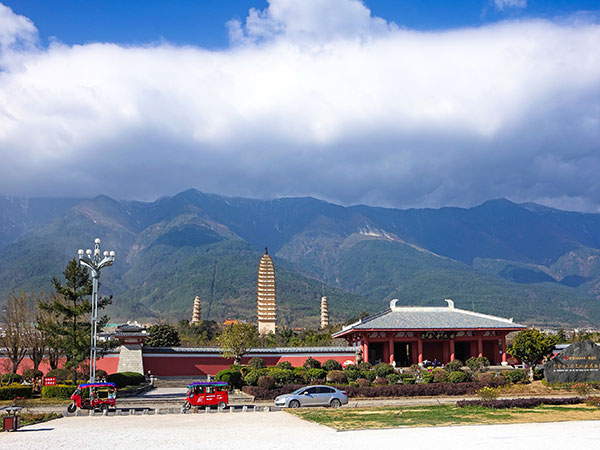 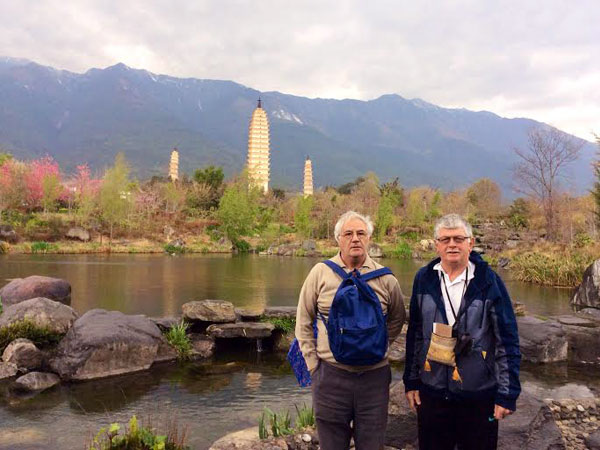 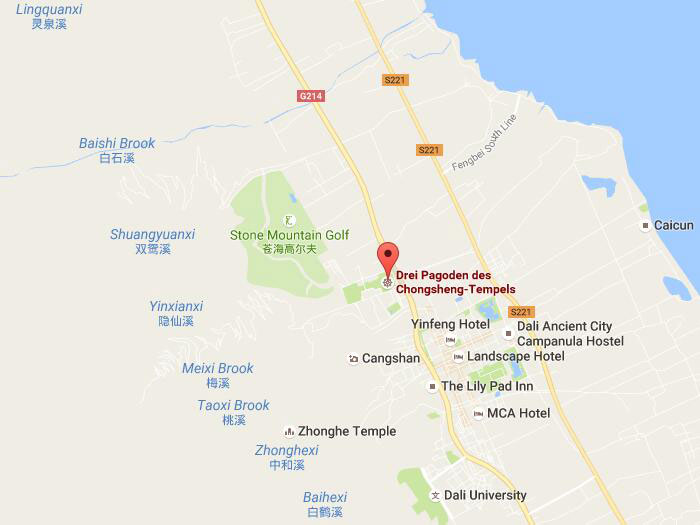 Three Pagodas are located about 1.5km north of Dali Ancient Town. They are standing at the east foot of the tenth peak of the massive Mt. Cangshan and facing the west shore of the Erhai Lake. Three Pagodas are made of brick and covered with white mud. As its name implies, the Three Pagodas comprise three independent pagodas forming a symmetric triangle. The elegant, balanced and stately style is unique in China's ancient Buddhist architectures, which makes it a must-see in the tour of Dali. The Three Pagodas, visible from miles away, has been a landmark of Dali City and selected as a national treasure meriting preservation in China.

The main pagoda, known as Qianxun Pagoda, reportedly built during 824-840 AD by King Quan Fengyou of the Nanzhao State, is 69.6 meters (227 feet) high and known as one of the tallest pagodas in Chinese history. The central pagoda is square shaped and composed of 16 stories; each story has multiple tiers of upturned eaves. There is a carved shrine containing a white marble sitting Buddha statue at the center of each fa?ade of every story. The body of the pagoda is hollow from the first to the eighth story, surrounded with 3.3 meters (10 feet) thick walls. In 1978, more than 700 Buddhist antiques, including sculptures made of gold, silver, wood or crystal and documents, were found in the body during a major repairing work. The designers of the pagoda are supposed to have come from Xi'an, the capital of Tang Dynasty at that time and the location of another pagoda-Big Goose Pagoda, which shares the similar style but is 200 years older. The other two sibling pagodas, built about 100 years later, stand to the northwest and southwest of Qianxun Pagoda. They are 42.19 meters (140 feet) high. Different from Qianxun Pagoda, they are solid and octagonal with ten stories. The center of each side of every story is decorated with a shrine containing a Buddha statue. Three Pagodas are well known for their resilience; they have endured several man-made and natural catastrophes over more than a thousand years.

There is a lake named Reflection (Juying Chi) behind them. The lake is known to be able to reflect images of the Three Pagodas.

【Chongsheng Monastery】
Three Pogadas' mother building was known as Chongsheng Monastery and used to be the royal temple of the Kingdom of Dali and one of the largest Buddhist centers in south-east Asia. It was originally built at the same time as the first pagoda but was destroyed in a fire in the Qing Dynasty reign period. The temple was later rebuilt in 2005. It was recorded that Qianxun Pagoda had been split in an earthquake on May 6th, 1515 AD in Ming Dynasty. However, it miraculously recovered ten days later in an aftershock. The most recent record of severe earthquake in the Dali area occurred in 1925. Only one in a hundred of the buildings in Dali survived, but the Three Pagodas were undamaged.

【Duan Gong Tomb】
Duan Gong Tomb is located in the west of Chongsheng Three Pagodas, 350 meters east from Ganxun Tower. After the Ming dynasty chorography called it Pingzhang Tomb, originally it was circular mound, about 8 meters in diameter, 2 meters high, and there were the stone columns above, now there are only left a mound, tomb building has been destroyed. In August 1996, Duan Gong Tomb was managed by Three Pagodas Administration and developed and utilized step by step according to “Chongsheng Temple Three Pagodas Administration Protection and Construction Planning”.

【Religious Culture Tourist Area】
Religious Culture Tourist Area is the restoration and reconstruction ancient Chongsheng Temple architectures in 2005. Architectural style is collected the essence of the architecture of Tang, Song, Yuan, Ming and Qing dynasties, and on the main axis there is in turn: the gate, Free Life Pond,  Approach Bridge, Hall of Heavenly Kings, Maitreya Temple, 11 sides Guanyin Hall, the Great Buddha’s Hall, Acuoye Avalokitesvara Pavilion, Mountain Stone Memorial Arch, Wanghai Building. Aside the central axis and the next axis has: monk room, the abbot courtyard, guest room, Arhat hall, Thousand-Buddha Gallery, the Founder Hall, Dharmapalas Hall, Buddhist Institute, etc. All bracket system windows and doors of the temple and the decoration for the details all used toon carved precisely thinly, and in terms of colored drawing, the buildings adopted highest specification of golden dragon and golden phoenix and different colors. 617 (pieces) of Buddha, ritual items are all cast in bronze of thousands of tons, of which 599 (pieces) of Buddha and painting set the records of the top of China.

【 Chinese Name】: 崇圣三塔
► Address: Chongsheng Temple Three Pagodas Tourism Culture Area, 1.8 km north away from Dali Ancient City in Yunnan Province
► Opening Time: 09:00-17:00
【 Recommended Visiting Hours】: 2 to 3 hours
【Best Time to Travel Chongsheng Three Pagodas】: March and April is the best time to visit Chongsheng Three Pagodas, during that time there are a lot of festivals and activities. Lots of festivals and activities of Bai nationality centered on period from March to April every year, traveling during this time tourists can enjoy the full-bodied ethnic customs. Tourists can choose to go during the Third Month Fair (from March 15 to March 21 in lunar calendar, the west of Dali Sanyue Street) and Butterfly Activity (April 15 in lunar calendar in Butterfly Spring). Dali annual average temperature in Dali at that time is about 15 degree, so March and April is also the best time to travel Dali.