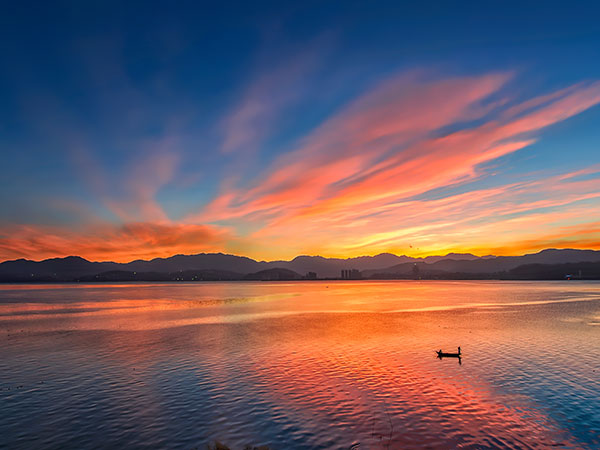 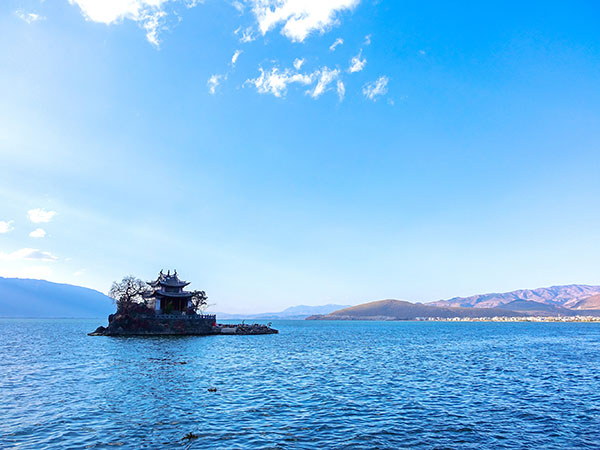 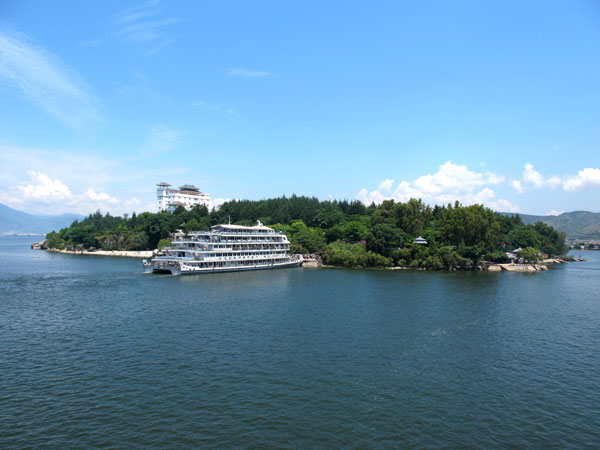 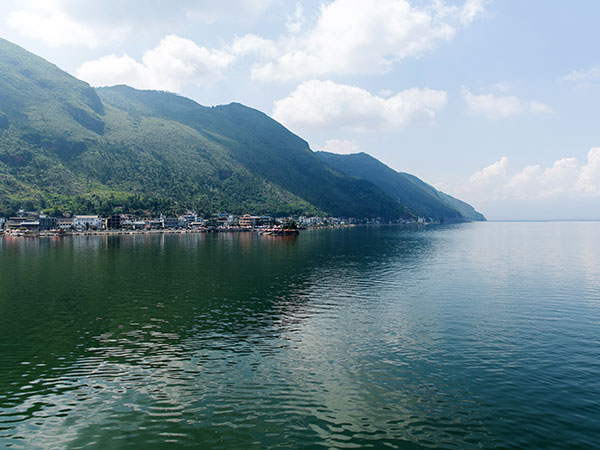 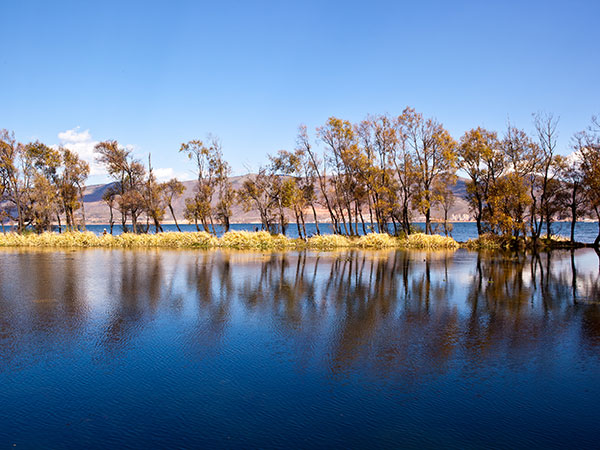 Since the lake has a shape of an ear, it gets the name Erhai (Ear Lake). It stretches 42km from north to south and 3.9km from east to west. The lake covers an area of more than 250 square kilometers and is 21.5 meters at the deepest. It is ranked the second in Yunnan Province and the seventh freshwater lake in China by area and water storage.

Erhai Lake was formed by the subsidence of geological fault. It is reputed as the pearl on plateau for its beautiful scenery. The famous sights of the Erhai Lake include Three Islets, namely Jinsuo, Chiwen, and Yuji, Four Lands, namely Malian, Mandarin Duck, Qingsha, and Daguanpeng, and Nine Curves, namely Lotus, Huge Crane, Panji, Phoenix Wing, Dill, Ox Horn, Bozuo, Gaopin, Soaring Crane. Besides these spots, the lake also has some other attractions such as Shadows of Three Towers, Nine-Arched Stone Bridge, and Jade Dragon Playing in the Water, etc. Many scenic spots surround the lake, including the Erhai Park, the Xizhou Mid-sea Pavilion, the Haishe and the Double-Corridor. Moreover, one can also find a number of historic sites in the Erhai Lake Scenic Area, including the Heavenly Mirror Pavilion, the Water Moon Pavilion, the Zhuhai Pavilion, the Kwan-yin Pavilion and the Small Putuo Hill.

Dali is picturesque throughout the year, with many scenic spots, Xiaguan Wind, Shangguan Flowers, Mt. Cangshan Snow and Erhai Lake Moon are the four most famous and fascinating scenes. So, in Dali, in addition to the Dali Ancient City you can not miss Mt. Cangshan and Erhai Lake.

【Xiaguan Wind】
The wind especially in Xiaguan of downtown city where the air flow rate is fast, the wind is particularly fierce, at speeds up to 12 ~ 14 m/s, maximum speed of 28 meters/seconds. Under this circumstance, woman rides the bike or walks will probably fall down. In a year, there are more than 35 days of windy days, so Xiaguan gained the name of “windy city”.

【Shangguan Flowers】
It is said that Shangguan has "fragrance spread for ten li tree" (li=500 meters), the flower of the tree is as big as a lotus, and its fragrance is sweeter than osmanthus fragrance, its color is pale pink, and the fruit of it is the black and hard which is used as a court bead, so it is also called "court beads flowers".

During the Yuan dynasty Zhizheng period, the flower was in good blooming, and the flowers bloomed month after month, year after year so that full-bodied aroma overflowed hundred paces. Later it had become extinct, it was said that due to the time that flowers were in full bloom, there were so many viewers, some corrupt officials racketeered local people who wanted to see the flowers, people poured out endless grievances and had to kill the flowers quietly. But until now, the Bai people love flowers very much and it has become a habit that Bai people grow flowers.

【Mt. Cangshang Snow】
Mt. Cangshang Snow mainly referred to the scene that top of the mountain has perpetual snow all the year round. Malong Peak, Yuju Peak, Xueren Peak and Zhonghe Peak of Mt. Cangshan, even in summer there is snow covered.

Why the covered snow did not melt for thousands of years, there is a beautiful legend in Dali folk. According to legend in ancient times, there is a group of gods of plague that bullied in Dali Bazi, making people "ten people fall ill and nine apart". Bai nationality brother and sister two people in order to rescue the suffering people, under the guidance of the goddess of mercy they cultivated themselves and learned methods, and then they drove out the gods of plague to the top of Mt. Cangshan and the gods of plague were frozen to death. In order to make the gods of plague never be resurrected, younger sister also became god of snow to dominate the god of plague, therefore in Mt. Cangshan the snow did not melt for thousands of years. But in fact it is because Mt. Cangshan altitude is too high, the top of the mountain has low temperature.

【Erhai Lake Moon】
"Erhai Lake Moon" is one of the four famous scenes in Dali. Ming dynasty poet Feng Shike wrote in “A Brief Account of Western Yunnan”: the wonder of Erhai Lake is that the sun, moon and star are bigger and brighter than other place. If on the lunar 15th, rafting Erhai Lake under a bright night, the moon is exceptionally bright that the scene was attractive: in the water, the moon is as round as a circle, and the sky is bright and clear as if just out of the bath in the Erhai Lake.

【Erhai Park】
At the southernmost tip of the mountains in Erhai Lake, there is a good place to enjoy Mt.Cangshan and Erhai Lake scenery. The park was built in 1975, has quite a scale. Looking down from the sky, Erhai Lake is like a crescent moon, quietly lied between Mt.Cangshan and Dali bazi. Erhai Lake has three islands, 4 continents, 5 lakes and 9 bends. Erhai Lake is a fault subsidence lake, the lake is clear to see the bottom so that since the ancient times it has been called "immaculate fine jade between the mountains".

It is said that at the bottom of the sea there was a gigantic jade cabbage, this beautiful lake was the jadelike wine that trickled from jade cabbage heart. Its northeast is a nursery garden growing Yunnan camellia, cuckoo, fairy primrose, snow lotus and other rare flowers and trees. Every good and special plants of Dali region are also concentrated here, such as bodhisattva willow of Dali Guanyin Pond, Jizu mangosteen of Jizu Mountain, Gantong tea of Gantong Temple in Dali, etc. North of the park has shallow sea and beach which used as bathing beach. And by the beach there is wide lawn for visitors to rest. Behind the lawn there is steep slope with 200 multistage mountaineering steps built by granite, and above the stone steps there is Wanghai Building (Facing Sea Building) with overhanging eaves. Wanghai Building is linked with a long gallery, and under the background of lush trees, there constitute a set of antique national style architectures. In Wanghai Building, strolling the gallery and standing out, the magnificent scenery of Erhai Lake is under your eyes.

In the ancient literature Erhai Lake has been called: Erhe River, Yeyu River, Yeyuze, Mihe River, Kunming Pool, etc, which was formed the plateau lake by collapsed west Erhe River, and due to its appearance looks like ears, so it named after Erhai Lake (Er is the homophone of ear in Chinese character). Although its area is smaller than Dianchi Lake, as a result of deep water level, its storage capacity is larger than the Dianchi Lake. Erhai Lake is originated in Pibi Lake of Eryuan County, the source from Bagu Mountain.

Erhai Lake has been famous and recorded in the history as early as the Han dynasty. In 122 BC, Zhangqian was sent on a diplomatic mission to the western regions and back to Changan, when he reported to the emperor Wu of the western regions, he said that in Balkh (now Afghanistan) he had seen Shu cloth which was brought via Sindhu (India). He strongly advised: going to Sindhu from Shu county is convenient and shortcut that it gains everything and lose nothing. According to Zhangqian's advice, the emperor sent messengers to southwest to seek the road to Sindhu. Roads were blocked by Kunming tribe near Erhai Lake, eventually failed to connect to Sindhu. In 120 BC, due to Kunming tribe blocked the way, emperor Wu decided to call up manpower in the capital Chang'an and dug a man-made lake, called "Kunming Lake" for training of water army, in order to conquest Kunming tribe of Erhai Lake region. Of course, the water army in Chang’an "Kunming Lake" that the emperor Wu trained to conquer the Yunnan plateau could not have come in handy. However, this story was recorded in Selections from Records of the Historian by Sima Qian.

In the history there is record that on the east and west side of delta there is grassy shallow bay, where is a good place for fish breeding, and the aquatic products are rich in there, local called "fish soil pot"." According to the “West Erhai Lake Record”: there are a lot of fishes and they are in good quality compared with the fishes in other water area. Emperor Weiwu ate it in four seasons and said: "the fish from Dianchi Lake is extremely tasty in winter".

【The Legend of Mt. Cangshan and Erhai Lake】
Emperor's daughter had just married and then her husband went out to war and did not return more than ten years. People who came back said that her husband was dead, the princess began to cry day and night, finally her tears became the Erhai Lake and the princess life was depleted. At that time her husband returned, but it was farewell and her husband was overwhelmed with sorrow and solemnly loudly swore that he would turn into mountain and keep the sea mountain, thus there came the Mt. Cangshan and Erhai Lake. When the fishermen fishing see above features two clouds winding when it should be home to draw back and forth, because it was the princess and her husband together, they will be delighted to cry because of short meet, while the erhai lake will become a baffling craze, ethos cloud chung, very afraid, every time holed up in erhai lake people around this time, till the end.

【Suggestions】: Tourists can rent a mountain bike in Dali Ancient City. Pay attention to sun block and altitude stress, tourists can bring hat, cycling scarf, alkaline mineral water, etc; around Erhai Ring Road there is signboard, tourists can ride according to the signboard. There are shops and restaurants along the road.

【Lake Sacrificial Ceremony】
With the clarion, Dali Sea Sacrificial Ceremony begins. The local residents will host ancient sacrifice activity in Hongshan Peninsula in Shuanglang Town. Bai youth men will lift up the patron god statue from the sacrificial altar to the seas to go on board, and Bai girls hold the lotus lamp and put them into the sea as to escort patron god. Hundreds of fishing boats cruise on the Erhai Lake, people starts fishing. During the activity, there is Dragon Boat Regatta, Erhai fisherman’s song, Bai nationality singing in antiphonal style, dragon dance and lion dance and other artist performances. Tourists can visit dairy fan workshop, shipbuilding workshop, Bai embroidery workshop and other characteristic workshops. Tourists can also taste the local famous special cuisines like “Fish Full-Course Dinner”.

【Best Time to Travel Erhai Lake】
The best time to visit Erhai Lake should be from June to August, during that time is very comfortable. The seasonal variation of Dali is not obvious, there is no obvious hot summer and bitter winter. And the weather in Dali is spring all the year round.

【Clothing】
Erhai Lake is in Yunnan, the weather is pleasant. Tourists can bring the spring clothing and do not need to bring the thick clothes. In addition to it is a little bit cold at night, the temperature is suitable during other time.