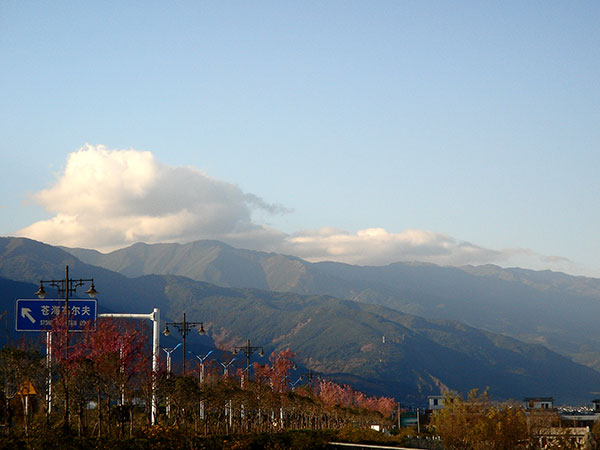 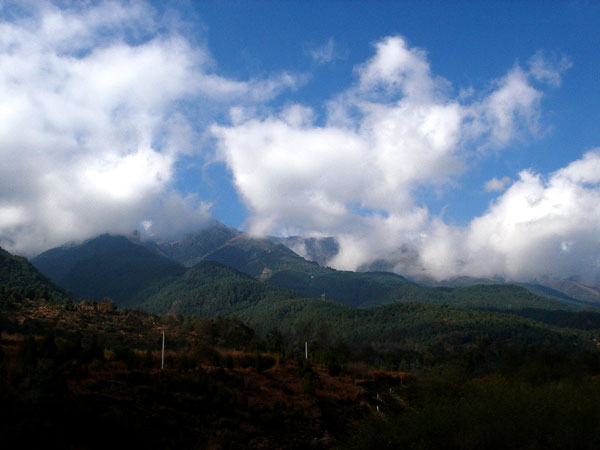 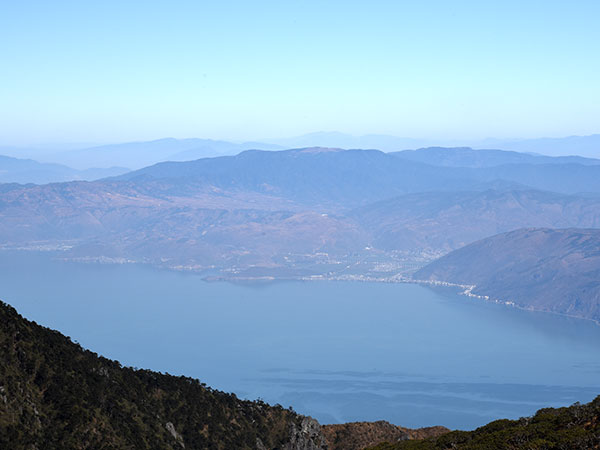 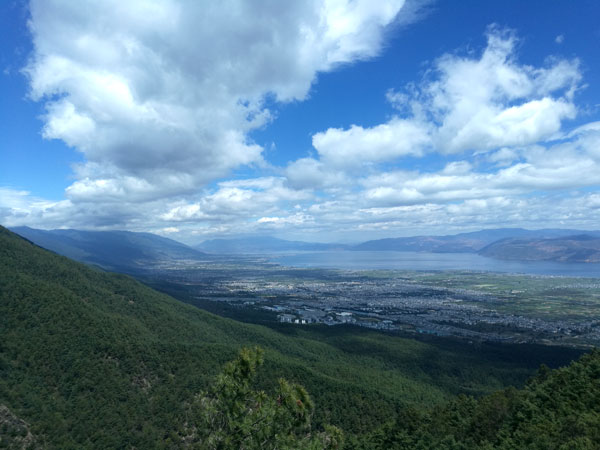 
Mt.Cangshan's 19 peaks extend 50km north to south in their column formation like a screen. The peaks, straight and magnificent, are overgrown with primeval forests, and 18 springs and streams filled with crystal-clear waters serpentine among them. Waterfalls and surging rivers emit thunderous roars. Malongfeng, the main peak, shoots up into the sky with its top clogged with dazzling snow all the year round. 'Clouds, Snow, Peaks and Streams' are four spectacular views of the Mountain.

【Mt.Cangshan Nineteen Peaks】
Mt.Cangshan Nineteen Peaks north start from Eryuan Dengchuan, south to Xiaguan Natural Bridge. And the peaks from north to south is: Yunnong, Canglang, Wutai, Lotus, White cloud, Heyun, Sanyang, Lanfeng, Snowman, Yingle, Guanyin, Zhonghe, Longquan, Yuju, Malong, Shengying, Buddha Top, the Horse Ear, and the Setting Sun. These peaks, are above 3500 meters above sea level, there are seven peaks as high as 4000 meters above sea level, the highest Malong Peak is at an altitude of 4122 meters.
【Mt. Cangshan Eighteen Creeks】
Between Mt. Cangshan and Nineteen Peaks, there is a stream between every two peaks running into the Erhai Lake, this is the famous Eighteen Creeks. Mt. Cangshan Eighteen Creeks are: Xiayi, Wanhua, Yangxi, Mangyong, Jinxi, Lingquan, Baishi, Shuanyuan, Yinxian, Taoxi creek, Zhongxi creek, Green Jade, Longxi creek, Qingbi, Mocan, Tingming, and Yangnan.
Qingbi Creek is a model of Dali all the water. It is the best of the Eighteen Creeks, which is worthy of the name Qingbi (clear and blue). Mt. Cangshan Creeks, the water is clear and the pool is beautiful. In high and steep Malong Peak and quiet Shengying Peak, standing in front of the Qingbi Creek, seeing the water flows as flying dragon through the gullies, and the several meters clear spring pours out from the cliff.
【Butterfly Spring】
Butterfly Spring is located at the foot of Mt. Cangshan Yunnong Peak in Dali. It is like a transparent gem, inlaying in the green shade, and attracting tourists far and near with its peculiar wonder. Between April and May in lunar calendar, various fragrant flowers in Yunnong Peak are in blossom, albizzia near the spring is emitting a faint scent, quietly lure tens of thousands of butterflies come here.
From Xiaguan, along the Yunnan-Tibet highway north of more than 30 kilometers, on the left side there is an ancient color of the stone arch. There are three written character "Hu Die Quan (Butterfly Spring)", from the memorial archway to the edge of Butterfly Spring, about hundred meters, two or three zhangs (a unit of length=3 1/3 meters) square, and the pool is built by laying marble stone. The spring is clear to see the bottom. And the water is benefit from Mt. Cangshan melting snow, which is not only stable in water yield, the water quality is also very good.

【Pingyunnan Stele of Emperor Yuanshizu】
Pingyunnan Stele of the Emperor Yuanshizu is in the center of March Street Square in the western part of the ancient City of Dayushi, at the foot of Zhonghe Peak in Mt. Cangshan. The stele was built in 1307, the 11th year of the reign of Yuan Dynasty Emperor Chengzhong. It is 4.44 meters high and 1.65 meters wide. It is made of two huge pieces of granite standing on the back of a stone turtle, hence its other name of Turtle Stele. It records how Yuan Emperor Khublai Khan pacified Yunnan and divided it into counties. Also it explains how Yunnan Province was established.
【Dehua Stele in Nanzhao】
Dehua Stele in Nanzhao is at the foot of Fading Peak of Mt. Cangshan in the middle of Dali and Xiaguan and is 6km from Xiaguan City proper. It faces Erhai Lake, with its back to the Mt. Cangshan. The stele was built in 766, the first year of the reign of Tang Emperor Dehua. It is 3.02 meters high, 2.27 meters wide and 0.58 meter thick. Made of sandstone, the stele records the political and military affairs of Nanzhao State and the cause of the Tianbao Battle between Nanzhao and Tang forces. Most important is the fact that the stele records Yunnan Province and the relations between these groups.
【Qingbi Stream】
Qingbi Stream is also named as the Green basin Water. It is located between the Shenying Peak and the Malong Peak of the Mt. Cangshan. The mountain spring wells up just from the root of the rocks. It looks like gushing pearls and pouring jades in a shape of a big basin. There are 3 levels of the basin, where the water is very clear and the stones are beautiful, making a unique combination of green and blue, so it was called Qingbi Stream. Qingbi Stream is one of the top 18 streams in the Mt. Cangshan.
【Cangshan】
Ming Dynasty's Xu Xiake, the greatest traveler in the Chinese history, climbed up the real world of the mountains in spite of all the dangers and sufferings and left behind him excellent diaries of his tour and poems for us. What the great painter Xu Beihong praised of the stream is that 'No one of the peaks, gorges, forests and springs can's be expressed in the paintings', and regarded the appreciation of the scenes here as the utmost enjoyments of 'the satisfaction of soul'.
【The Horse-washing Pond】
The Horse-washing Pond lies between the Yuju and Zhonghe peaks in the Mt. Cangshan. It is 4,000 meters above sea level and is a high-latitude drift pond of the Quaternary Period, known as the "mountain lake". In fact, there are more than 20 meters from Xima Pond to the top. In the famous Mt. Cangshan ponds, The Horse-washing Pond with its high altitude, water quality and its own characteristics becomes the excellent alpine lake with beautiful scenery. It is said that, when Kublai Khan went on an expedition towards Dali, he and his army climbed over Mt. Cangsha and they had been stationed here to wash the horse, therefore The Horse-washing Pond gained the name.

A legend says when Khublai Khan made an expedition to Dali, he crossed the Cangshan Mountains and washed his horses here. In late spring and early autumn, the weather is clear, the snow has melted and the flowers are blossoming. So both late spring and early autumn are the best seasons to visit the site.
The Horse-washing Pond has an area of about 4500 square meters, about 1.5 meters deep, belong to the moraine lake in Dali Little Ice of quaternary period. It is said that The Horse-washing Pond is the place for stocking black dragon by Guanyin (Avalokitesvara), black dragon lived in the west of hot spring of Xiaguan during spring and summer and lived in The Horse-washing Pond during autumn and winter, so the The Horse-washing Pond also called "the Dragon Pool". Some people said that the The Horse-washing Pond was black because that black dragon once lived there. Look carefully, the bottom and surrounding of The Horse-washing Pond is paved by thin lividity slab, and this is obviously not natural generated, but human made it. According to history, The Horse-washing Pond also called "Gaohe River", which was water conservancy facility in Nanzhao period.
【The Dragon-eye Cave】
The Dragon-eye Cave is on Piyu Cliff, located on the southern slope of Longquan Peak in Mt. Cangshan, to the west of the ancient city of Dali. The towering cliff is like a rampant blue dragon. A path along the cliff leads to the Dragon-eye Cave at the top. By the mouth of the cave, there is a stone bridge called the Immortal Bridge. Across the bridge comes the Mouse Road, which leads to the Xuandi, Wendi and Yuhuang pavilions.
【Gantong Temple】
Gantong Temple or Tangshan Temple, is on the southern slope of Shengying Peak in the Mt. Cangshan, 5km south of the ancient city of Dali. The temple faces Erhai Lake, with its back to the snow-covered Mt. Cangshan in the south. It was built in the early years of the State of Nanzhao (early ninth century). It is composed of the Main Court and the Great Hall to the west of the Court. To the left of the front of the Hall is a bronze bell weighing hundreds of kilograms and to the right there was originally a big drum with a diameter of nearly two meters. But the drum no longer survives. The temple is appreciated as the foremost in Southwest China for its quiet environment, imposing halls and numerous ceremonies.
【The 7-dragon-girl Pool】
The 7-Dragon-Girl Pool is located on the Black Dragon Stream between the Dragon Spring and the Yuju Peak in the Mt. Cangshan. It become a rare scenic spot in the Cang-Er Scenic Zone, due to its hanging rocks covering one on the another, its streams flowing into a waterfall and falling down into a pool. Going up along the streams, you can see the 7 Dragon-Girl Pools of the different natures lined one by one. The lowest one the No.1 Dragon-Girl Pool and the top one is the No.7 Dragon-Girl Pool. They are separated with an average distance between them of about 500 meters. While you are looking down from the top, you can hear the sound of the gushing springs which sounds like thunder, and you can enjoy a unique pleasure.

It is said that in a year, plague spread at the foot of Mt. Cangshan, two siblings used the magic arts they learned to drive away the plague to the top of the hill, and they buried it in the snow to freeze to death. In order to make the plague never be resurrected, sister turned into a snow peak as a snow god to guard the Mt. Cangshan. Dali was not magnificent without Mt. Cangshan snow landscape.

Dali Mt. Cangshan mountain path is twist and turn, in the past climbing Mt. Cangshan is very difficult, in February 1996, Sino-US joint venture made investment of 16 million RMB in construction of Mt. Cangshan ropeway, the ropeway total length of 1668 meters, climb to 478 m, using the United States imports of advanced equipment and technology, and it took just two and a half months time to build and put into use. It provides tourists a safe, reliable, comfortable and fast means of transportation to explore beautiful and amazing Mt. Cangshan. Cableway station is located under the foot of Mt. Cangshan, 1 km away from Dali Ancient Town.
【Traffic tips】: There is tourism cableway in Mt. Cangshan. Next station is located in west of a racetrack in Dali March Street, and the previous station is Zhonghe Temple.
【Cost budget】: people can take the cable car up the hill at the foot of the mountain, round-trip ticket price 35.00 RMB. The cable car will stop at Zhonghe Temple, and then people need to walk up the hill. If you have interest to go slow up the mountain, you can rent a horse up the hill on the ancient town, about 80.00 RMB. But because of government regulations, take a cable car up the hill need to pay 30 RMB.
【Special note】: Jade Belt Road in the east mountainside of Mt. Cangshan is tourist route designed specifically for visiting Mt. Cangshan. Going along the Mt. Cangshan mountainside north-south direction, people can visit Gantong Temple and Qingbi Creek, etc.

【Chinese Name】: 苍山
【Recommended Visiting Hours】: 6 to 8 hours
【Best Time to Travel Mt. Cangshan】: March to May is the best time to visit Mt. Cangshan, during that time you can see the azalea. Four seasons in Dali are not distinguished, the rainy season is mostly in May to October. After the rain between summer and autumn, the air temperature drops sharply.