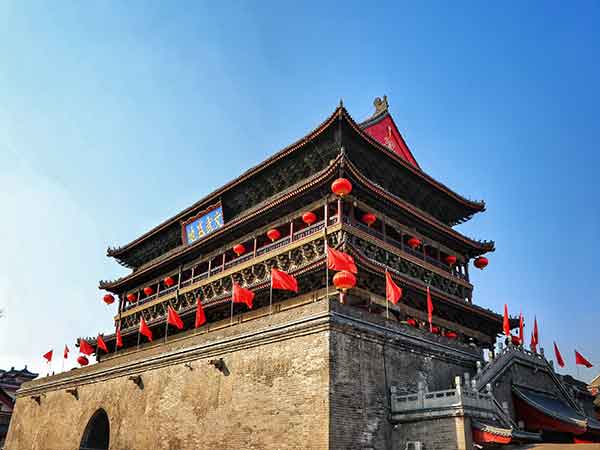 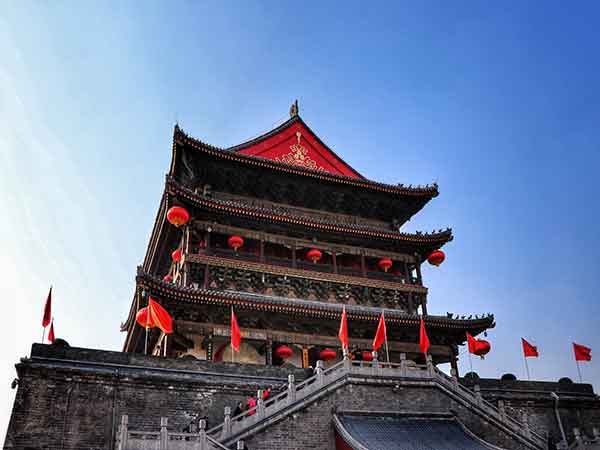 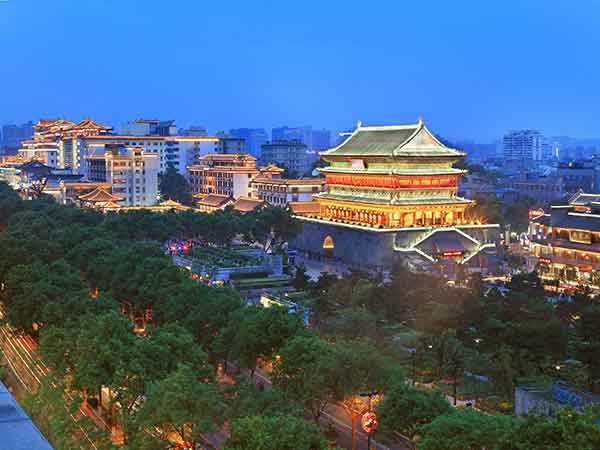 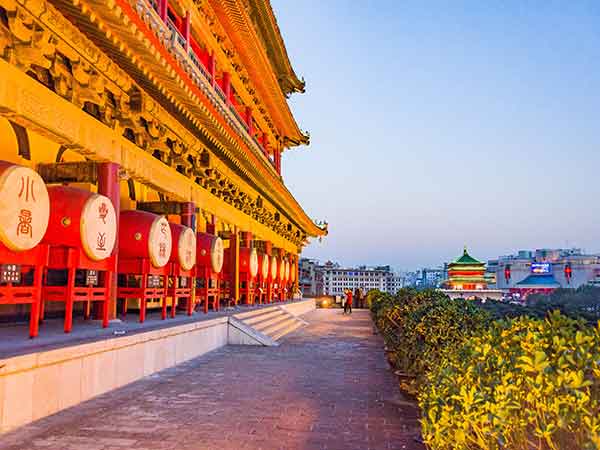 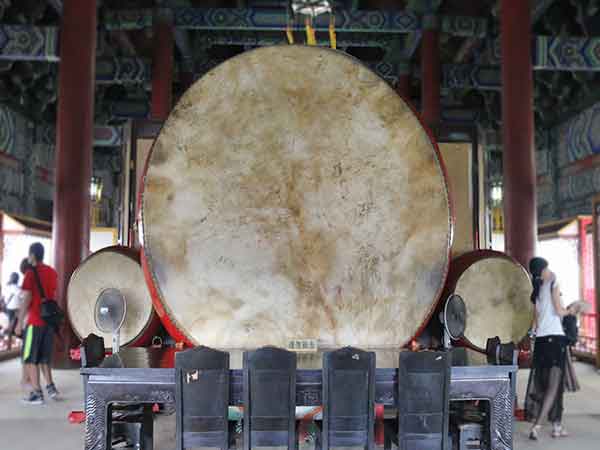 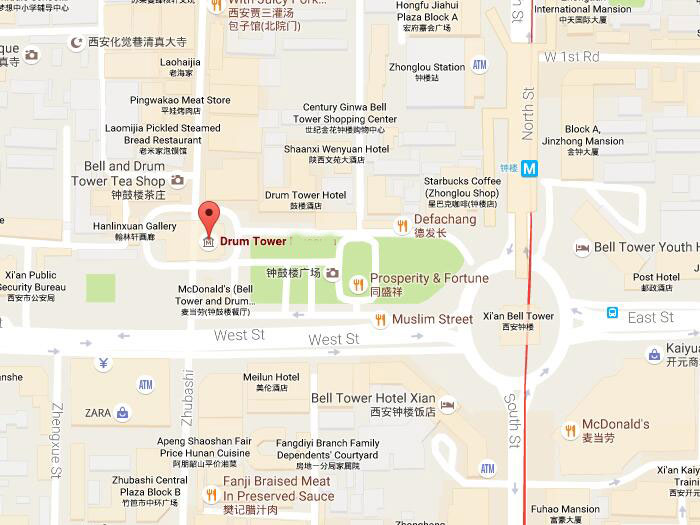 One of landmark of Xi'an; the largest drum tower in China

The Drum Tower is located at the south end of Beiyuan Gate of Xidajie Street in Xian, facing  the Bell Tower at east. The Bell Tower is just 250m from the Drum Tower. It is the largest one existing in China. The foundation of the tower is 52.6m in length, 38m in width and 7.7m in height with one gate.

The Drum Tower was built in the thirteen years of Ming Hong Wu (1380), 4 years early than the Bell Tower. The area of foundation of the Drum Tower is 738.55m larger than that of the Bell Tower, and it is also 34m higher than the Bell Tower. There was a big drum hanging on the tower in ancient time which was used for telling the time to citizens, hence the name of the tower.
The architectural form of the drum tower is Xieshan -like double eaves with three water dypasses. The foundation of the tower is 52.6m in length, 38m in width and 7.7m in height. The middle of south and north wall, there are two 6m high dorrways. The drummer building is rectangular with 2 floors. The foundation is built with black bricks. The two floors both have 10 rooms and are surrounding by corridors. The eaves are decorated with bracket system, which makes the level of the tower clearer.
Since 1950s, the drum tower has been renovated several times. In 1996, the government decided to remake the big drum in the tower. The new drum is 1.8 m high with 2.83 m in diameter. It is made of cow leather. The weight of the drum is 1.5 ton. The sound of the drum is loud and vigorous, which you can hear 5km away from here. It is the largest drum in China. Between the Drum Tower and the Bell Tower, there is a square with grass, flower and fountain, which is a good place for leisure and entertainment for citizens.

Xi'an Drum Tower was built in Ming Hongwu period thirteenth year (1380), four years earlier than the Bell Town. In the tower, there was a big drum, drumming the hours per day; therefore it was called “Drum Tower”. Drum Tower is across north Gate Street, and is only 200 meters apart from Bell Tower, corresponding to each other.

The people who organized to construct Drum Tower were marquis Changxing--Hou Gengbing and magistrate of Xi’an Wang Zongzhou, and it is said to lay a foundation under the rainy day. Thirty-eighth year of the reign of emperor Kangxi (1699) in Qing dynasty, and Emperor Qianlong forth year (1740) it had rebuilt twice.
Xian City in Ming dynasty has circumference of 11.9 kilometers, covers an area of 8.7 square kilometers, the Drum Tower is located in the middle of Xian city by southwest, in order to make the drums can spread throughout the city, it is necessary to build tall tower and set the drums. In Ming and Qing dynasties, around the Drum Tower mostly is government department at all levels of Shaanxi province and Xi'an city, the government office and the lives of residents cannot do without the drum sound, and the drum sound also became the most familiar voice at that time. There are stairs in Drum Tower, step into upstairs people can overlook the whole city scenery. Xi'an Drum Tower is one of the main symbol and representative architecture of the Ming and Qing dynasties in the city.

Drum tower built over the tall rectangular pedestal and it was brick joisted, 34 meters high. Brick tower pedestal is 52.6 meters long; from north to south are 38 meters wide and 8 meters high. Pedestal on the center of the north and south have 6 meters wide and high arch door, for people and cars come in and go out. It reaches West Avenue in its south, north to the Beiyuanmen. Area of 1998.8 square meters, the stairs to enter moved from northwest to the east side now.
Drum Tower is beam frame type wooden buildings, two floors, and triple double-eave roof. Drum tower building forms are gable and hip double eaves roof. It is a rectangular drum tower, which consists of two floors. Two floors broadly among seven rooms wide, three rooms deep and there is corridor surrounded. Outside the building eaves are decorated with green colored stone, make the whole building is distinct, gorgeous and beautiful.
In the application of the technology in the construction of the Drum Tower in the Tang dynasty style and on the basis of the Song dynasty architecture law, Drum Tower made a lot of innovation. The whole tower structure was not using nails and eaves used structure principle of bracket system. It has classic appearance of the building which is rich in ethnic characteristics.


How to Get to Drum Tower