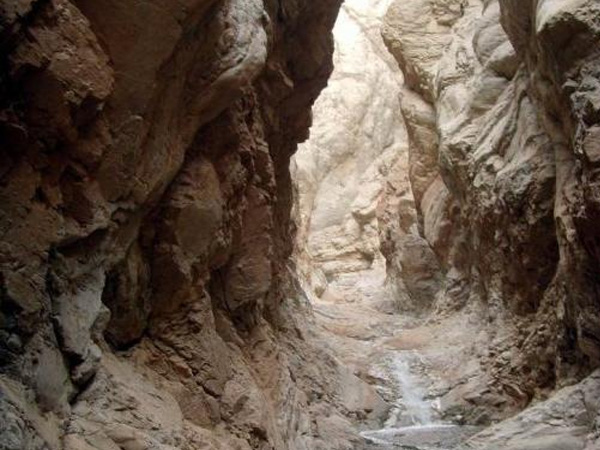 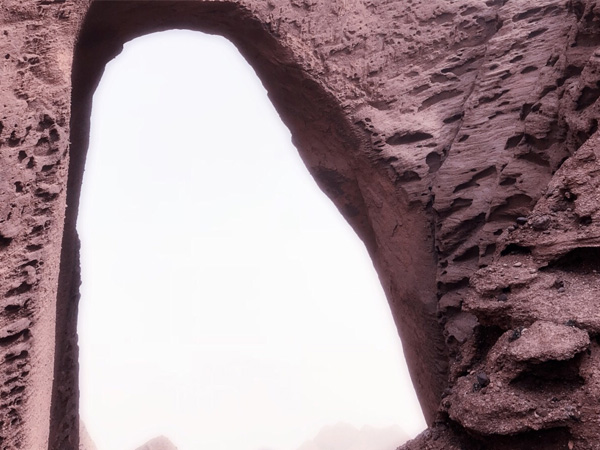 
Shipton’s Arch, also called Tianmen, meaning “heavenly Gate” in Chinese, is a conglomerate natural arch in the west-northwest of Kashgar, near the village of Artux in Xinjiang, Uyghui Autonomous Region in China. Artux Tianmen Scenic Area is AA level traveling scenic area, located in the west of Tianshan Mountain south range, in the west of Artux Town, Artux City, and 75 km away from Artux city. The scenic spot is grand, steep, deep, quiet and mysterious. The surface of the stone wall looks like the mural with all sorts of strange things. The “Tianmen” or Shipton’s Arch, stands on the Pamirs, shapes like "∩" pattern, about 100 meters wide, 500 meters high, and unable to measure thickness, which is the world's highest arch. Shipton’s Arch is like a heaven gate standing in the wilderness, “vying with heaven in stature”. It is under the blue sky, and mostly it is in the fog, forming a natural landscape with extremely fine craftsmanship.

Tianmen Scenic Area is Artux city leading scenic area, in the process of construction, according to the advocated principle of "make it plain looking and return it to the nature", the scenic spot facilities construction are in harmony with the nature and landscape as a first consideration, the unique ecological environment and the natural landscape, make Tianmen Scenic Area becoming a multi-functional tourist destination of scientific research and exploration.

It is estimated that the arch is 370 meters, which is about the height of the Empire State Building. The true height of the arch is debatable from different perspective: It seems to be 61 meters viewing from the east (normal approach route); it appears to be 370 meters viewing from the west side (approachable via a technical canyon ascent).  The arch once written in the Guinness Book of Records for its exceptional height, but the listing was later dropped when the editors of the book could not locate the arch exactly.
In the right wall of Tianmen there is cave shapes like honeycomb, speaking in front of it can hear the echo. Left wall surface looks like a strange murals, we have no idea that whether it is artificial or chisel, but it can be called uncanny workmanship! Passing visitors are taking pictures as a souvenir in here. Standing in the middle of Tianmen, anyone can have echo words here.
Passing a long thin strip of sky, it will be suddenly enlightened, and stone mountains and Shipton’s Arch are in the front. Artux Tianmen has extremely fine craftsmanship and created by nature which makes people truly amazing. And reach the peak and get close to the Shipton’s Arch can let a person fear...Climbing here has the certain difficulty, mainly due to rock weathering is serious, rock mass is brittle, so it is easy to peel and cause accident. However, experience the prompt drop in Shipton’s Arch "lintel" is a wonderful feeling that one can not experience elsewhere, around every year a large number of rock climbers come here to feel "Tianmen drop". It is the paradise of tourists and explorers. Artux Tianmen had recommended as a one of 25 latest exploration routes globally by the United States ADVENTURE magazine.

According to historical records, in the summer of 1932, American journalist came here accompanied by the local Uighur guide. The British consulate in Kashgar, Eric Shipton was discovered Tianmen in 1947, so Tianmen also called Shipton’s Arch. Eric Shiption, a man born to risk, he had a marriage, but he soon found a life of ease was not consistent with his inherent spirit of adventure completely, constant exploration and the search for the unknown is the ultimate fun of life. Many chances of foreign dispatch gave him the opportunity to explore in different places. He participated in some mountain expedition in Africa, and he hit the position of 8527 meters of Mount Everest, the 7300 meters of Muztagh Ata peak. And he got the title of "uncrowned king" of Mount Everest, and it was said that he explored the first road to the summit of Mount Everest.

After Shipton, Tianmen has always been in "hidden place", until 2000, the National Geographic of America sent groups to rediscover the highest arch for foreigners. Tianmen stayed forgotten for many years because its remote location, even the locals have no idea where it is. According to a article written by reporter whose home is in Artux, why Tianmen was known by more people, was in the spring of 2005, thanks to a scholar official came to Kizilsu Kergez prefecture due to foreign exchange. He found the historical data and found the information and the route of the arch, so he brought it to the view of public.
Nowadays, there are several companies operating out of Kashgar offer day trips or overnight stay for tourists to the Shipton’s Arch. The tour is about two to three hours’ driving from Kashgar, half of which is off-road. Ladders have been placed by locals to make the scramble to the base of the arch easier, and evidence of other travelers is visible at the site. And it is required to pay an entrance fee to locals who placed the ladders.

How to Get to Shipton's Arch

Shipton’s Arch is 75 km away from Artux. Departing from Kashgar and driving towards the direction of Artux via G314 (National Road 314) and transferring to S309 (Provincial Road 309). The road condition is good, and after 1 hour driving, get out of S309, there is a special road Tianmen Road to the scenic area which is about 15 km to the scenic area. From the entrance of scenic area to Shipton’s Arch, you need to walk for 5 km.